Portraits of Dara Shikoh in the Treasures Gallery

Visitors to the Treasures Gallery at the British Library may notice that the display of Dara Shikoh album pages have changed. On exhibition are eight folios from the Dara Shikoh Album (Add.Or.3129), one of the great treasures of the Asian and African department. The album was compiled by Prince Dara Shikoh (1615–59), the eldest son and heir of the Mughal Emperor Shah Jahan, and presented as a gift to his wife Nadira Banu Begum in 1646-47, whom he married in 1633. A new selection went into the gallery at the end of May in time for the Jaipur Literature Festival. You can find these in the Arts of the Book section near the entrance to the Magna Carta. For information on the previous display, please read our blog post on 'New Display of Dara Shikoh Album'.

The album contains seventy-four folios with sixty-eight paintings interspersed with calligraphy and gilt tooled leather covers.  Inside the album, paintings are arranged in facing pairs alternating with facing pages of calligraphy. The album features eighteen portraits of Dara Shikoh, portraits of princes and notable women of the court, holy men, and studies of natural history subjects.

In this new display, visitors can view a set of facing portraits of Dara Shikoh as a teenager, approximately 15-18 years of age. This complementary set  features the prince standing against blossoming shrubs. He is dressed in fine white muslin garment worn over vivid coloured trousers. In both studies, he is adorned in necklaces composed of enormous pearls, jewelled bracelets and earrings. On the portrait to the right, he holds a gold tray containing two loose pearls and a red spinel. 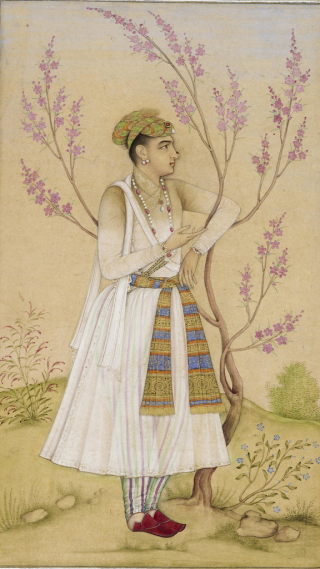 The second pair of portraits features women at the Mughal court. This includes an unidentified beauty of the court and a  portrait of Dara Shikoh’s elder sister Jahanara who was an influential political figure and profoundly spiritual. She wrote ‘The Confidant of Spirits’, a biography of the Sufi saint Mu’in al-Din Chishti in 1640. 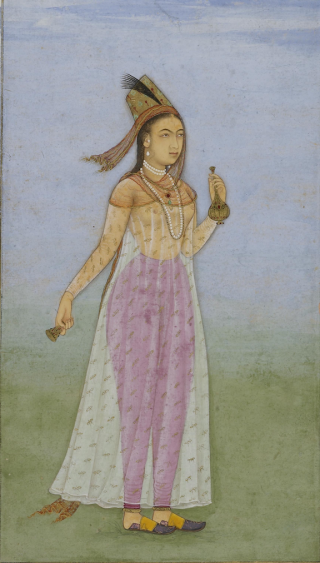 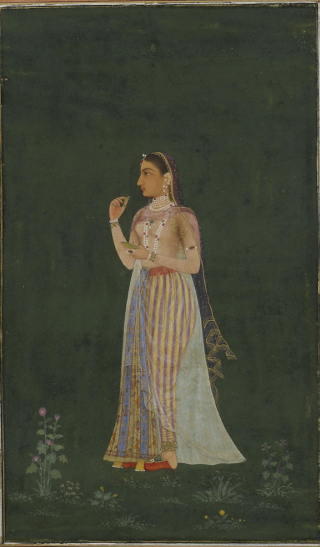 The remaining four works on display were not intended as pairs, but are representative works from the album. This includes a study of two pigeons perched beside a portable dovecote, a pink crown imperial lily (one of eighteen floral studies in the album), a calligraphic exercise by Muhammad Husain al-Kashmiri who was one of the most eminent calligraphers during the reign of Mughal emperor Akbar (1555-1605), and an engraving of the Virgin and Child by either a Dutch or Italian artist from the 16th or 17th century. 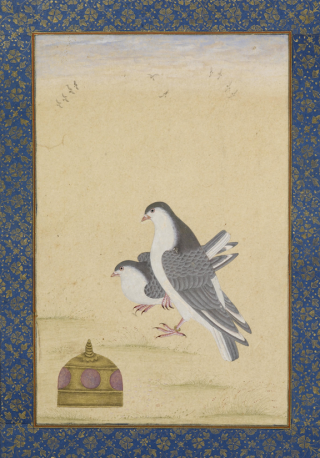 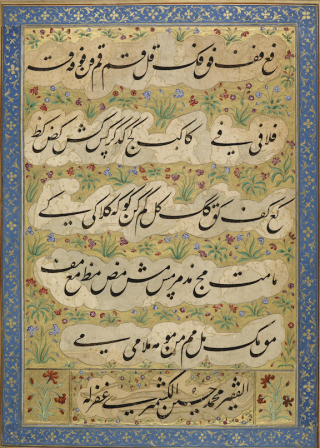 For our audience and readers unfamiliar with the history of Mughal art, the European engraving pasted onto a Mughal album page may appear to be unconventional or even eccentric. In this album, the facing page too features western prints picturing St. Catherine of Sienna by Antonia Caranzano and a print of St. Margaret pasted into a Mughal album page.  Artists at the Mughal court were in fact exposed to European engravings, specifically Christian iconography, through Jesuit missionaries who visited the court of Emperor Akbar from 1580 onwards. Mughal artists were commissioned by Akbar and his son Jahangir to illustrate scenes on the life of Christ. While Mughal interpretations of Christian themes and studies of foreign visitors appear in albums, the original prints that inspired such works are more uncommon. 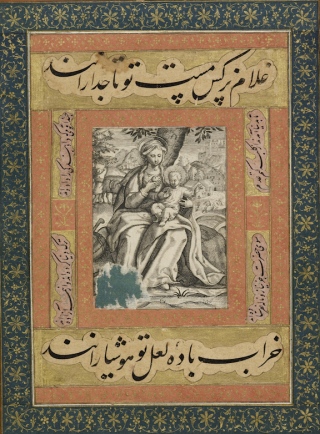 Engraving of the Virgin and Child by a Dutch or Italian artist, 16th or 17th century, British Library, Add Or 3129, f.42v