The Flotilla Tour of 1933: a Demonstration of British Naval Power in the Gulf

On 29 August 1933 the acting Political Resident in the Persian Gulf, Percy Gordon Loch, received a letter from the Political Agent at Kuwait, Lieutenant-Colonel Harold Dickson, informing him that there were strong rumours circulating in Kuwait that a Persian naval officer had hauled down the British flag at Basidu, the naval station for the British Persian Gulf Naval Squadron. 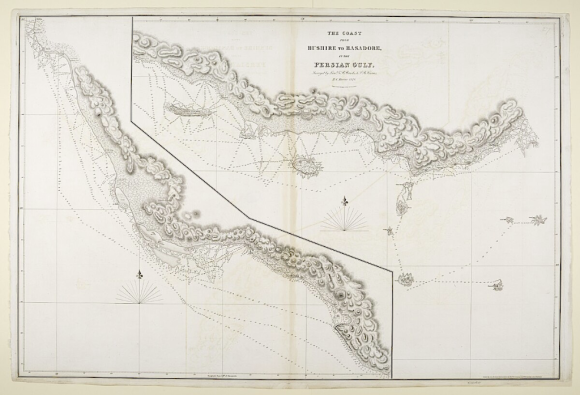 On 7 September 1933 Loch sent a circular telegram – addressed to the Senior Naval Officer in the Persian Gulf and the British Political Agents at Bahrain, Kuwait and Muscat – confirming that the British flag had been hauled down by a Persian officer, but that only a few days later, as soon as it was made aware of the incident, HMS Bideford had landed an armed party at Basidu and the flag had been rehoisted. Loch’s telegram further stated that His Majesty’s Chargé d'Affaires to Persia had been informed by the Persian Government that the officer had acted without authority, and that it had issued stringent instructions to its Navy to prevent similar occurrences in the future.

In a second circular telegram, issued on the same day, Loch requested that his previous message be translated into Arabic and distributed to the Arabian coast rulers, ‘who should be requested to give copies to all their notables, and by all other possible means to make it public.’ Loch concluded this telegram by stating – for the Political Agents’ personal information only – that the Royal Navy’s First Destroyer Flotilla was expected to arrive at Henjam on 15 September, for the purpose of displaying the British flag along the Arabian coast of the Gulf. An amended version of the message intended for circulation was issued the following day. In further correspondence with Dickson, Loch stressed that care should be taken to avoid linking the arrival of the flotilla with the incident at Basidu, and to avoid any suggestion of it being a threat to Persia. 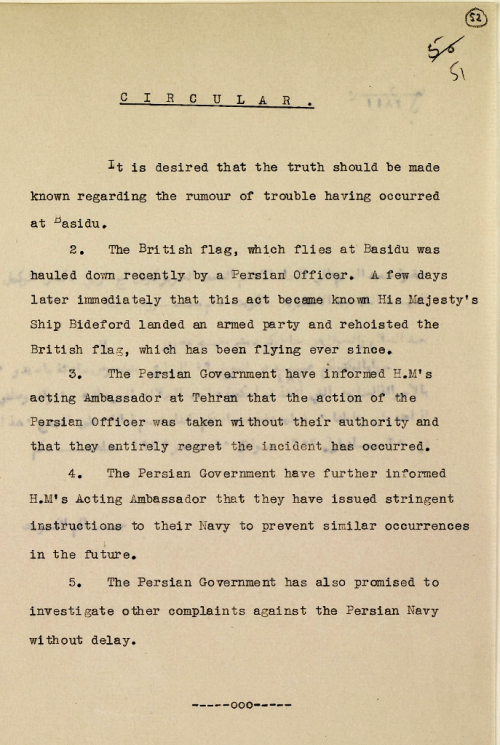 The fact that the swiftly announced flotilla tour was a direct response by the British to the Basidu incident was tacitly acknowledged in a telegram from Dickson to Loch, dated 19 September 1933, which reported that the circular, followed by news of the flotilla, had had the ‘best possible effect’ on public opinion in Kuwait. The flotilla, consisting of one flotilla leader, HMS Duncan, and eight destroyers from the Mediterranean Fleet, spent nearly a month in the Gulf, visiting Basidu, Dubai, Abu Dhabi, Kuwait, Bahrain and Qatar along the way.

It was at Dubai, on 23 September 1933, where the rulers of the Trucial states were invited to a durbar (a public audience held by a British colonial ruler, deriving from the Persian and Urdu word for court), that the purpose of the flotilla’s tour was made very clear. In his address, Loch – alluding to a statement made at another durbar by George Curzon almost exactly thirty years earlier, during a tour of the Gulf as Viceroy of India – told the rulers that the British Navy’s intervention in the Gulf had ‘compelled peace and created order on the [s]eas’ and had saved them from extinction at the hands of their enemies. He reminded his audience that the various treaties between the British Government and the Trucial rulers (beginning with the General Maritime Treaty of 1820) had made the former the overlord and protector of the latter. 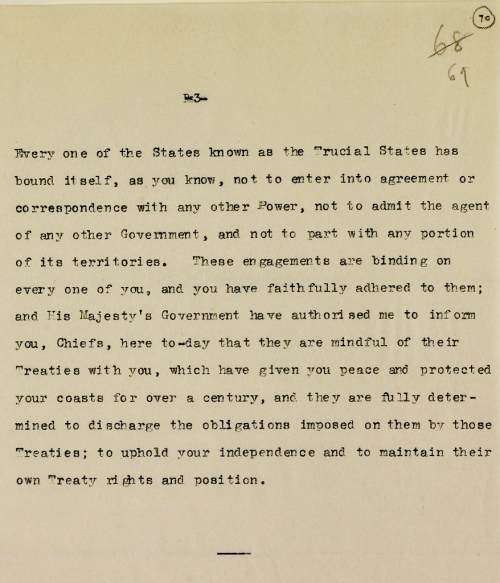 Curzon’s tour of the Gulf in November 1903 (as discussed in an earlier blog post) was comprised of visits to Muscat, Sharjah, Bandar Abbas, Bahrain, Kuwait and Bushire, and was intended as a demonstration of British naval supremacy, in anticipation of perceived threats in the region from France, Russia and Germany. A photograph of the durbar that took place on board RIMS Argonaut, off the coast of Sharjah, on 21 November 1903, shows the Viceroy elevated on a stage while the Arab dignitaries sit or kneel to his right. 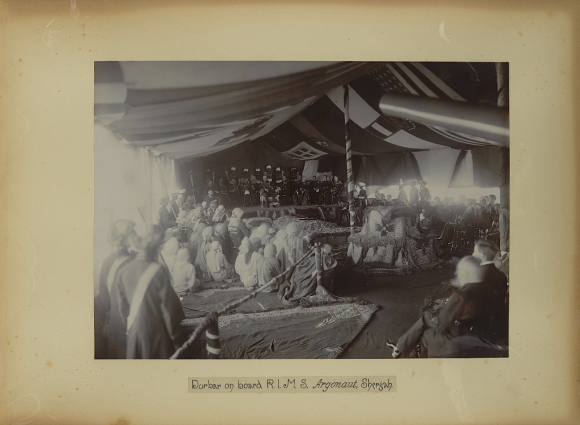 Thirty years later, the British took a relatively minor act of dissent at Basidu as an opportunity to make a very public display of their continuing naval dominance in the Gulf, in order to make it clear to the Persian Navy and to the Arab rulers that the British Government would not ignore even the slightest affront to its reputation. Loch’s remarks at Dubai were intended to remind the Trucial rulers of their relationship with the British Government and of their treaty obligations, as he warned them that ‘[t]hese engagements are binding on every one of you’.

The flotilla tour and the durbar appeared to have the desired effect. In his intelligence summary for September 1933, dated 28 September 1933, Dickson informed Loch that in Kuwait ‘[t]he general attitude of His Majesty’s Government has been most favourably commented on.’ Dickson went on to report that ‘[t]he hope is now generally expressed that the flotilla will not be withdrawn too soon, and that once for all the Persian Navy will be given to understand that it must behave itself.’ In an express letter to the Government of India’s Foreign Department, dated 19 October 1933, Loch concluded that confidence in the British had returned following the sight of the flotilla and the use of an armed party at Basidu ‘and will remain so just so long as we show ourselves determined.’

Posted by Ursula Sims-Williams at 1:11 PM