The Southeast Asia exhibition case outside the Asian and African Studies Reading Room at St Pancras is currently showing a selection of images of animals in manuscripts from Burma (Myanmar), Thailand, Vietnam and Indonesia. The delightful depictions of animals can be appreciated as exquisite works of art, but certain animals were also important as religious, political and cultural symbols in Southeast Asian societies, none more so than elephants. 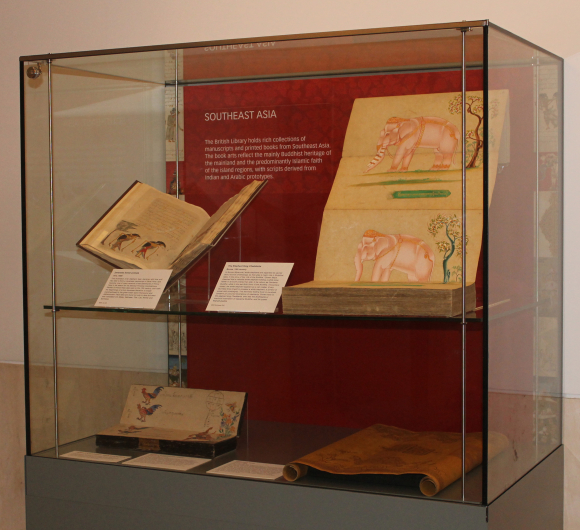 Animals in Southeast Asian manuscripts, on display in 2017.

In pride of place on the top shelf is a 19th-century Burmese folding book or parabaik (MSS Burmese 204) containing 22 coloured illustrations of elephants, showing the elephant king Chaddanta, who was the Bodhisatta or previous incarnation of Gautama Buddha, and his queen Mahathubadda. In Burma white elephants are regarded as sacred and a source of blessings, as they play a major role in Buddhist tales. In the story of the ‘Life of the Buddha’, Queen Maya dreamed that a celestial white elephant holding a white lotus flower in its trunk entered her side, to be reborn as Gautama Buddha, while in the last Birth Story of the Buddha, Vessantara Jataka, the white elephant appears as a rain maker. Every Burmese king longed to possess a white elephant, a symbol of power and sovereignty.

Next to the Burmese book is a Javanese manuscript of Serat Panji Jaya Kusuma dated 1805 (MSS Jav 68), which is shown open at a scene (identified by Lydia Kieven) where Sekartaji and her servant (emban) approach the forest filled with animals including an elephant, tiger, banteng, wild boar and two deer. This tale is one of many versions of the adventures of Prince Panji in his search for his beloved Princess Candrakirana. Stories of Prince Panji date back to the 13th century, and mark the beginnings of a truly Javanese literature no longer overshadowed by the great Indian epics Ramayana and Mahabharata. Panji tales are found not only in Java but were also translated into Malay, Balinese, Thai, Lao, Khmer and Burmese. 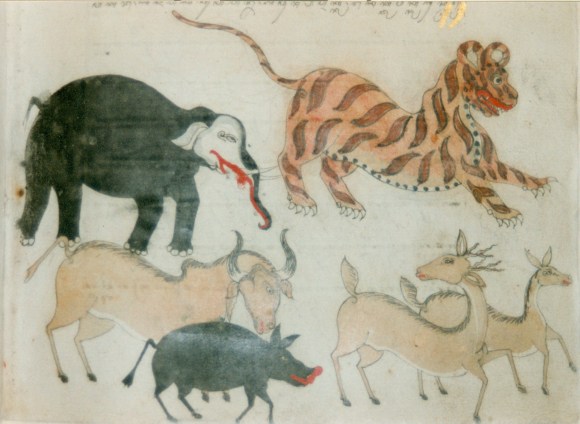 On the lower shelf is a Vietnamese royal edict issued by Emperor Khải Định on 25 July 1924, adorned on the back with a gilded turtle (Or 14632). The turtle (rùa) has a special place in Vietnamese culture and history. It symbolises longevity, strength and intelligence and is also closely related to the independence of Vietnam. Legend has it that Lê Lời, who led the Vietnamese fight against Chinese invaders in the 15th century, borrowed a sword from the dragon king. After the defeat of the Chinese, the sacred sword was returned to the king by a turtle which lived in a jade water lake. At the Temple of Literature (Văn Miếu) in Hà Nội, 82 stone turtles carry on their backs steles inscribed with the names of scholars, signifying the importance of education in society.

The final item in the case is a 19th-century Thai Phrommachat or horoscope manual in folding book format (Or. 13650). The twelve-year Chinese zodiac cycle was widely used in Thailand, and the manual contains coloured drawings depicting the zodiac in two series, together with detailed explanations for fortune telling and divination. 2017 is the year of the Rooster, and on display are drawings related to this year, with each rooster shown representing one particular quarter of the year. There is also a number diagram for people born in the year of the rooster, and the male avatar and plant for this year. These are accompanied by drawings used for predicting the future and to explain dreams and omens. 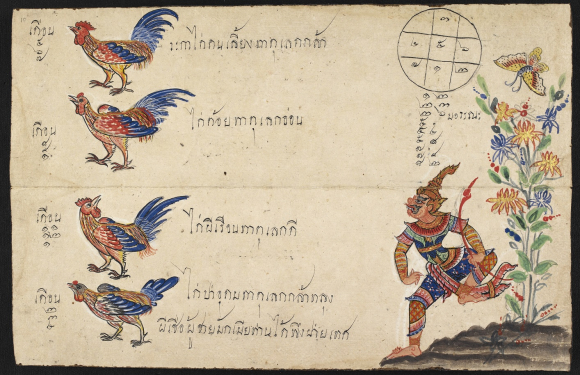 Or. 13650 has been fully digitised, and shown below are some other pages from this beautiful manuscript, which can be accessed through the hyperlinks beneath the images. 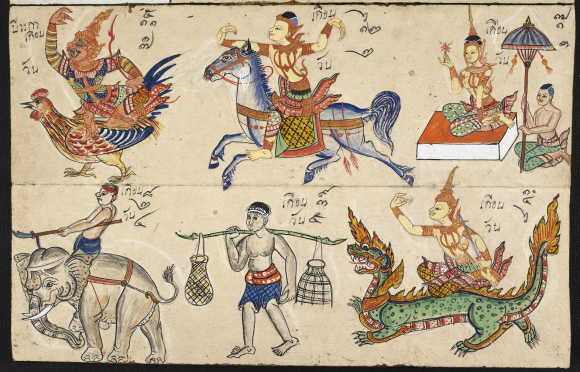 Other blog posts about animals in Southeast Asian manuscripts:

Elephants, kingship and warfare in Southeast Asia, by Sud Chonchirdsin

Elephants in all shapes and sizes

The year of the Rooster, from a Thai perspective, by Jana Igunma

Posted by Annabel Gallop at 1:03 AM