Chinese shuttlecock: a game for all

Ching Yuet Tang is a cataloguer on secondment from the National Art Library at the Victoria & Albert Museum. She is currently assisting with the retro-conversion of catalogue records relating to Chinese collections at the British Library.

When I started work on the cataloguing project on early printed Chinese materials in September 2016, little did I know that it would include an early twentieth century guide to a game that I used to play at school in my small village in Hong Kong.

‘Shuttlecock’, or, jianzi 毽子, is a favourite pastime in China, enjoyed for centuries by adults and children, both rich and poor. It can be played just about anywhere, at any time, and whether you are on your own, in a pair or part of a group. The aim of the game is to try to keep the shuttlecock in the air using only the feet, and to get as many kicks in as possible without dropping it. The item I encountered – Le Volant Chinois, written by Chu Minyi and Louis Laloy in 1910 – is a helpful illustrated manual providing detailed instructions for a total of 38 techniques, ranging from simple tricks to spectacular acrobatic displays! 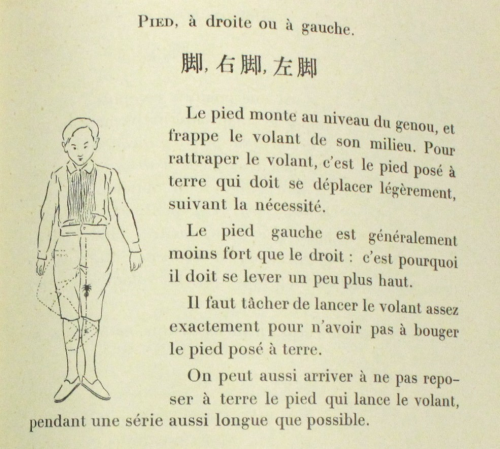 The book starts with simple techniques, such as kicking using the left or right foot. British Library, 15235.b.1 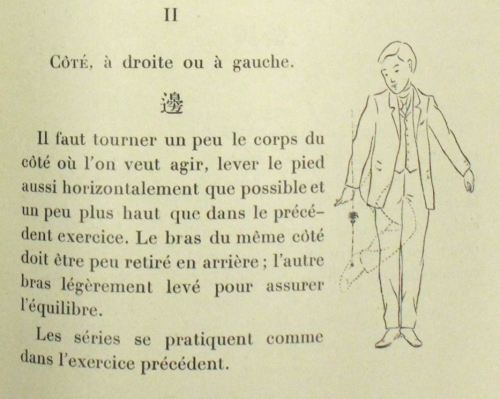 It continues with the sideways kick. British Library, 15235.b.1 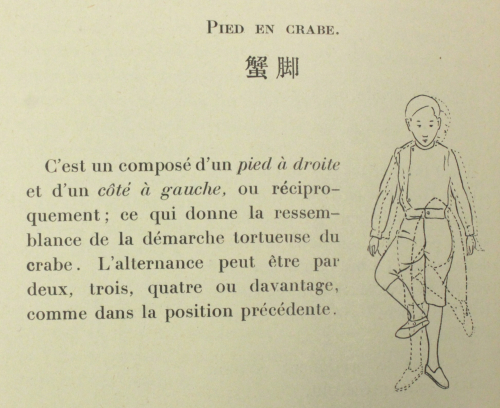 And then moves on to more advanced techniques, such as the crab-style kick. British Library, 15235.b.1 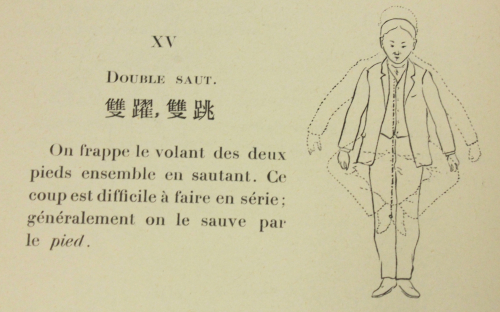 And even demonstrates jumping with both feet! British Library, 15235.b.1

Although jianzi can be bought from shops, they are incredibly easy to assemble at home too. It requires no more than a few feathers, some rubber bands, an old exercise book (preferably with a hardback cover for strength) and a pair of scissors. A jianzi is light-weight and pocket-sized, making it a perfect form of instant mobile entertainment in pre-digital times. It is easy to make, simple to play and, most of all, it is fun! 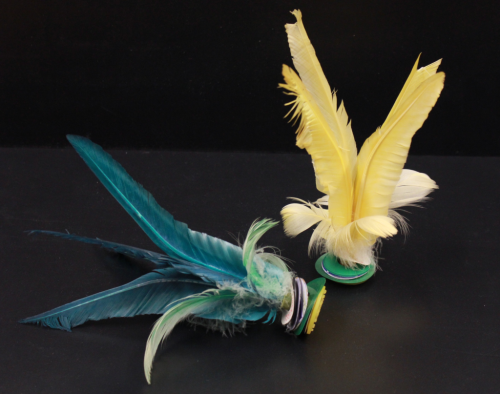 Jianzi has a long history of over two thousand years. According to the International Shuttlecock Association (ISF) website, jianzi (or a version of it), can be traced to at least the Han dynasty (206 BC – 220 AD) if not earlier. It is believed to have evolved from an activity called cuju 蹴鞠 undertaken by military troops for relaxation and exercise. Over the years, its popularity grew and extended to people from all walks of life. This can be seen clearly in a nineteenth-century Chinese export album, in which two men can be seen having a go at kicking a jianzi made of chicken feathers. According to the description, they managed to score over 1000 points in a row. 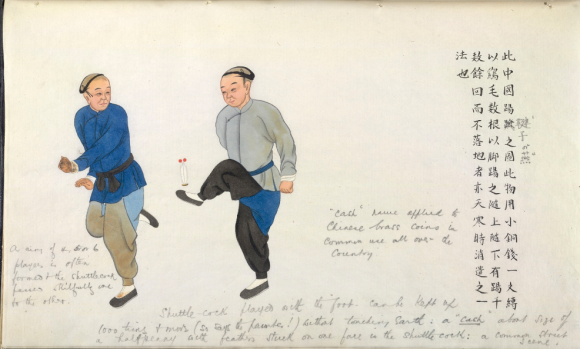 A common street scene. The caption describes the basic components for making a jianzi, namely a small coin about the size of a halfpenny, some feathers and a piece of string. British Library, Or 11539

Another historical reference to jianzi is given at the beginning of Le Volant Chinois, which reads:

This is a quote from another early printed book also held in the British Library, Di jing jing wu lüe 帝京景物略 by Liu Tong and Yu Yizheng, an account of Beijing in the early seventeenth century. It discusses seasonal leisure activities pursued by ordinary people, and mentions jianzi as a typical winter pastime enjoyed by many.

In recent years, jianzi has been transformed from a folk leisure activity to a formal competitive sport on a national and international scale. It not only has well-established official rules but also strict specifications about the components of a standard jianzi, from its weight and dimensions down to the number of feathers and the texture of its plastic base. It is now played over a net and deploys some of the goal-shooting techniques of football. The shuttlecock is kicked towards the other side and points are scored when the opposing team is unable to return it, as in the case of volleyball or badminton. The game has singles and doubles tournaments for men, women and mixed teams.

According to the ISF, jianzi entered the international spotlight when a Chinese athlete from Jiangxu demonstrated it at the Summer Olympics in Berlin in 1936. The sport has since gained great recognition and has spread to many countries around the world. Since the foundation of the ISF in 1999, the list of official members has expanded to include England, Finland, Germany, Hungary, Laos, Vietnam, Greece, France, India, Pakistan and Indonesia. Members take turns to organise their own championships and I am thrilled to hear that the 9th World Shuttlecock Championships 2017 will be coming home to Hong Kong.

Do not despair if you are not yet at competitive or championship level, as you can still enjoy a simple game of jianzi as a much-needed break from a busy modern lifestyle, while also keeping fit and active. So if you are looking for a new hobby, why not get inspired by the manual of Chu Minyi and Louis Laloy? You might just find yourself tapping into a hidden talent, and may soon be showing off your dexterity and endurance.

Posted by Annabel Gallop at 3:08 AM