Some bindings from Tipu Sultan's court

In recent weeks I have been examining bindings of the British Library’s manuscripts which formerly belonged to Tipu Sultan, Sultan of Mysore (r. 1782-1799). The British Library collection probably constitutes about 25% of the original Library as it was in 1799 after the fall of Seringapatam. The manuscripts originate ultimately from a number of different, largely unspecified, locations, but fortunately there is a distinct corpus (23 out of 242 so far examined) which can easily be identified as belonging to Tipu Sultan's court. These are works bound in his own individualistic style of binding or else were copied or composed at Seringapatam. 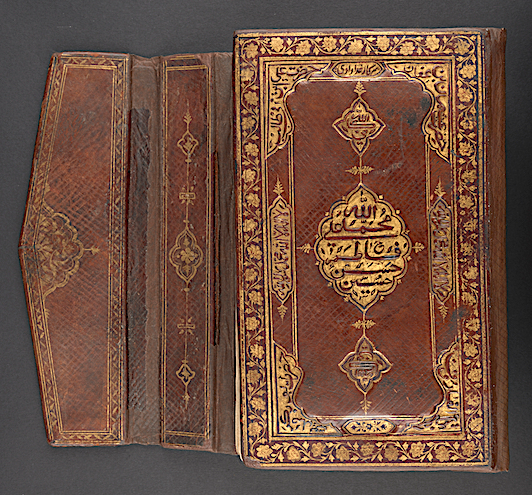 Front board of Tipu Sultan’s personal Qur’an with flap showing inscriptions 1, 2, 4, 5 and 6 below. This binding is unusual of Tipu bindings for its use of gilt decoration. Note also the diced patterned background which is a feature of several other manuscripts. (IO Islamic 3562)

One of the most lavish is Tipu Sultan’s personal Qur’an (IO Islamic 3562), illustrated above (more on this in a future blog). Decorated heavily in gilt on a diced patterned background, the binding also includes a number of inscriptions. These were described in general terms by Charles Stewart in A Descriptive Catalogue of the Oriental Library of the late Tippoo Sultan of Mysore, (Cambridge, 1809), p.v.

All the volumes that had been rebound at Seringapatam have the names of God, Mohammed, his daughter Fatimah, and her sons, Hassen and Hussein, stamped in a medallion on the middle of the cover; and the names of the Four first Khalifs, Abu Beker, Omar, Osman, and Aly, on the four corners. At the top is “Sirkari Khodādad,” (the government given by God); and at the bottom, “Allah Kāfy,” (God is sufficient).”

I thought it would be helpful to expand on these inscriptions which are stamped on the outside of the bindings. Typically, but not always, they consist of: 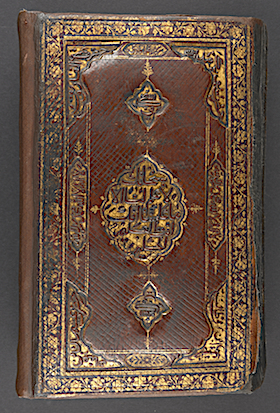 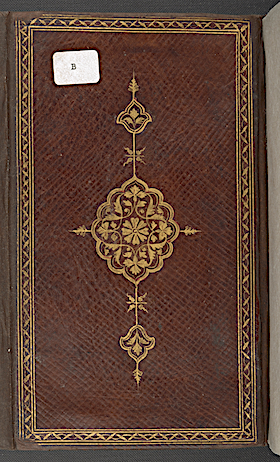 Left: back board with inscriptions 1, 3, 4, 5 and 6; right: doublure; below: flap with inscription 7 which currently, perhaps as a result of restoration, lies on the outside of the front board. (IO Islamic 3562)

A similar binding occurs on IO Islamic 3351, a less ambitiously decorated Qur’an, possibly dating from the 17th century but rebound at Seringapatam. Its small size (16.5 x 10cm) accounts for it only being inscribed in the central medallion, on the spine and with the usual sarkar-i khudādādī. Unlike many of Tipu's bindings, which have been altered during subsequent restoration, this one has been preserved in its original state with the flap designed to go inside the outer cover. 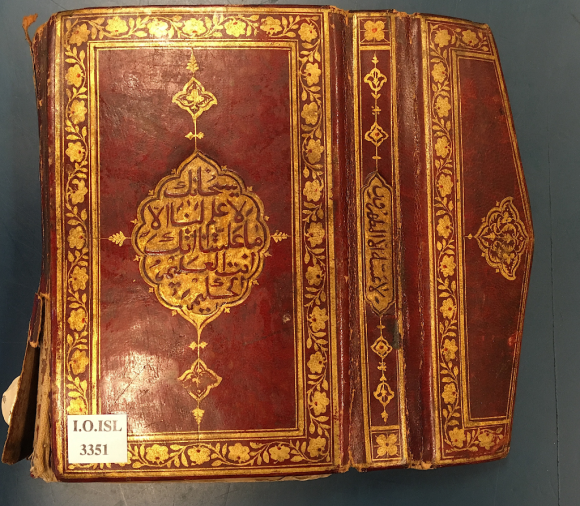 Back board and flap showing inscriptions 3 and 7. (IO Islamic 3351)

Less ambitious Tipu bindings show considerable variation and demonstrate that the inscriptions could be stamped quite carelessly as illustrated in the examples below. 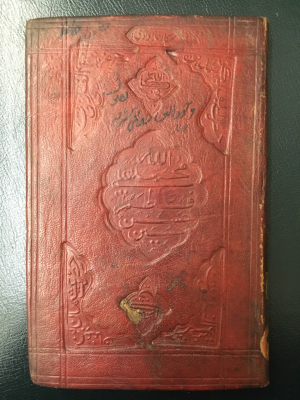 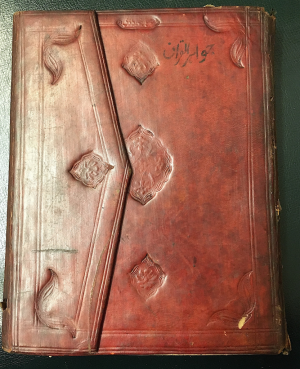 Not all of Tipu Sultan's bindings included his characteristic inscriptions. Two examples of comparitively simple bindings are illustrated below. 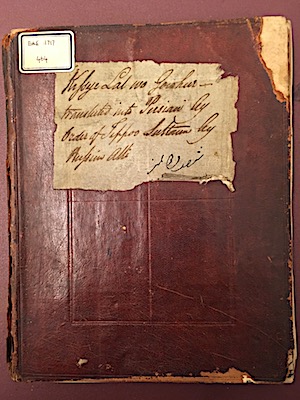 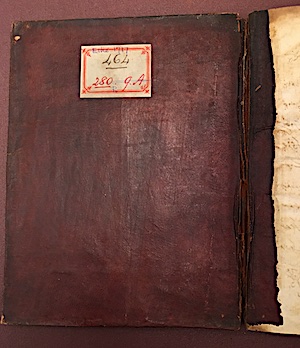 This manuscript is a translation into Persian from Dakhni by Ḥasan ʻAlī ʻIzzat of the love story of Lal and Gohar which was commissioned by Tipu Sultan in 1778. The binding is contemporary and still carries the Prize Agentsʼ label dating from when they were first examining the collection in 1799. (IO Islamic 464) 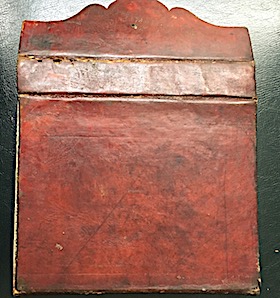 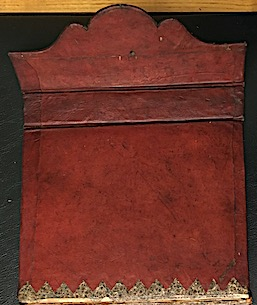 Another work commissioned by Tipu, his army regulations Fatḥ al-mujāhidīn by Zayn al-Dīn Shūshtarī. The scalloped flap is the only example I have found in the collection and unlike IO Islamic 3351 above, it was designed to lie on the outside. Note also the hole, presumably for ties. (IO Islamic 713)

Altogether I estimate that the British Library has about 600 volumes from Tipu Sultan's collection. These consist of 197 volumes of Arabic and Persian manuscripts deposited in the Library on 16 July 1806, further volumes deposited in 1807 (204 vols) and April 1808 (68 vols) and a proportion of the 308 manuscripts sent to London in 1837 after the closure of Fort William College in Calcutta and the dispersal of its collections. For more on this see my earlier post Revisiting the provenance of the Sindbadnamah. I'm hoping that by examining the whole collection I may be able to discover more about the provenance of each volume and establish certain regional binding styles, but this is very much work in progress, so watch this space!

Posted by Ursula Sims-Williams at 9:15 AM