Illumination and decoration in Chinese Qur'ans

A seventeenth-century Qur’an from China in the British Library recently attracted much interest in a belated Eid show-and-tell arranged for the local community. This provides an ideal opportunity to go into more detail about the British Library’s collection of Chinese Qur’ans. 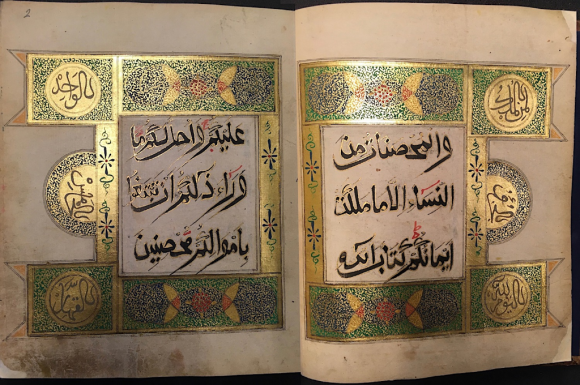 The opening leaves of a seventeenth-century Qur'an written in ṣīnī (‘Chinese’) script, part five of a set originally in thirty volumes (BL Or.15604, ff. 1v-2r)

Visitors are always surprised when we show them a Chinese Qur’an, as they don’t automatically associate Islam with China. But in the eighth century, Muslim merchants were already trading in China and a community is known to have been established in Xi'an, where a mosque was built in 742. The impact of Islam in China was, however, not strongly felt until several centuries later during the Song and Yuan dynasties: the network of routes, known as the Silk Road, became the conduit for the spread of religious and cultural influences as well as for goods and merchandise.

Chinese Qur’ans were often produced in thirty-volume sets rather than in a single-volume codex, and many of our Chinese Qur’ans are sections (juz’) from a number of different thirty-volume sets. The script used was a variation of muḥaqqaq and penned in a way which suggests that the pen strokes were influenced by Chinese calligraphy. This is often referred to as ṣīnī (‘Chinese’) Arabic. A central panel is a prominent feature of Chinese Qur’ans on their decorated pages, which usually contain as few as three lines of text, with only a few words on each. 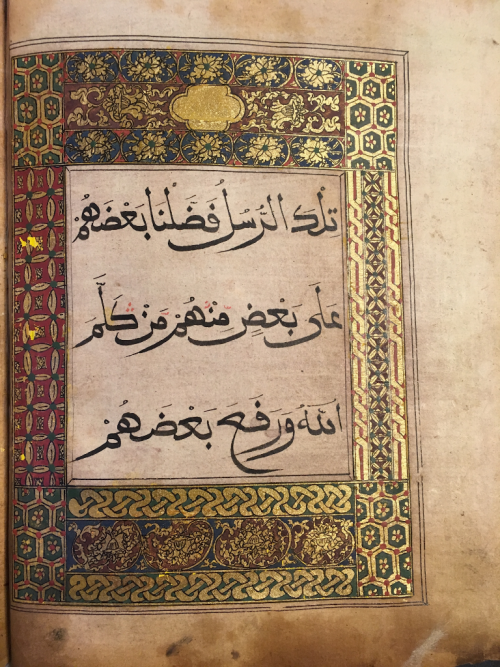 The beginning of a late seventeenth-century Qur'an written in ṣīnī script. This volume is the third of an original thirty-volume set (BL Or.15571, f. 1v)

The assimilation of local traditions in Islamic manuscripts produced in areas not normally associated with the art of Islamic calligraphy and illumination is evident in Chinese Qur’ans. While the illumination and decoration have the same function in all Qur’ans, the influence of local style and culture is manifest, without infringing Islamic practice in sacred art. The adaptation of symbols common to Chinese art and culture is therefore felt very strongly. In the final opening of a seventeen-century Qur’an, a lantern motif has become the visual vehicle for the text in the diamond design in the centre of the lantern. The impression of a Chinese lantern is further reinforced by pendulous tassels attached to the hooks on the outer side of the structure. 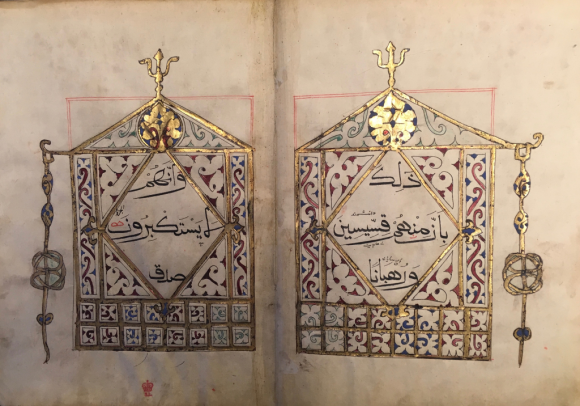 The decorated final text opening with lantern motif from a seventeenth-century Qur'an (BL Or.15256/1, ff. 55v-56r)

In the same Qur’an a decorative leaf, exemplifying the use of local flora, functions as a section marker indicating the halfway point in part six of a thirty-volume set. 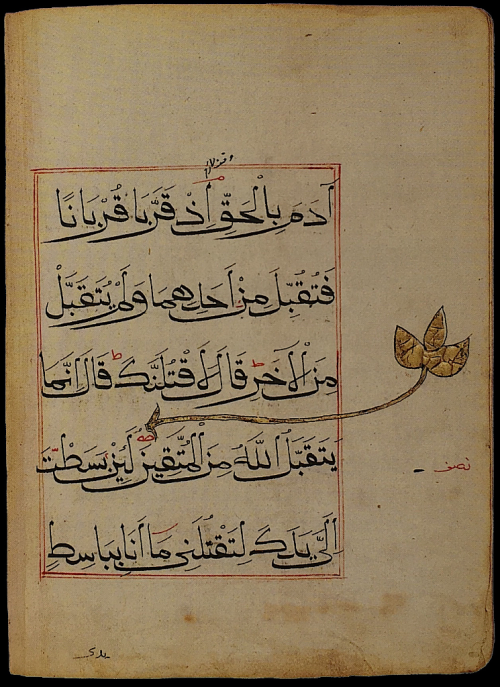 Chinese Qur’ans often incorporate vibrant colours and gold for typical motifs such as crescents and banners. The impression of petals in the shamsah (sunburst) illumination below is produced by the intricate design of overlapping circles. 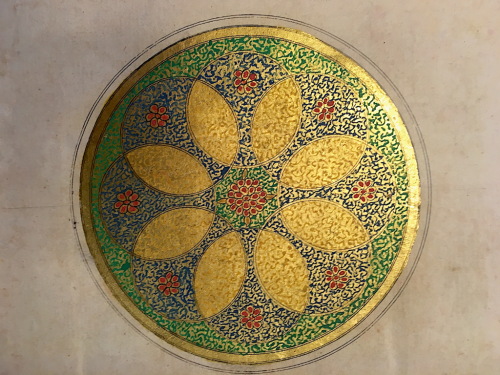 A shamsah medallion placed before the beginning of the text (BL Or.15604, f. 1r)

Chinese influence is also visible in the swirling lettering of the basmalah inscription in this shamsah medallion occurring in an eighteenth-century Qur'an, Or.14758, part ten of a thirty-volume set. 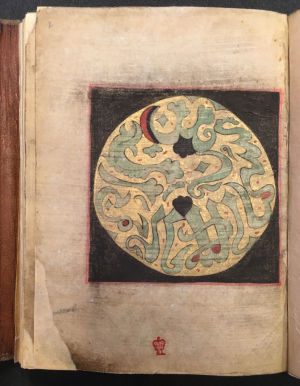 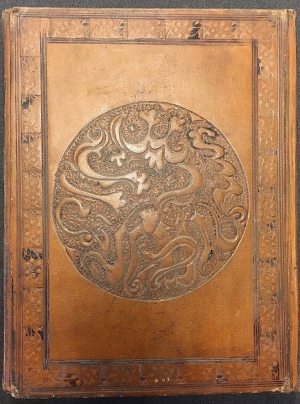 Left: The shamsah containing the basmalah, and right: the same design used as part of the design of the binding (BL Or.14758, f. 2r and front binding) 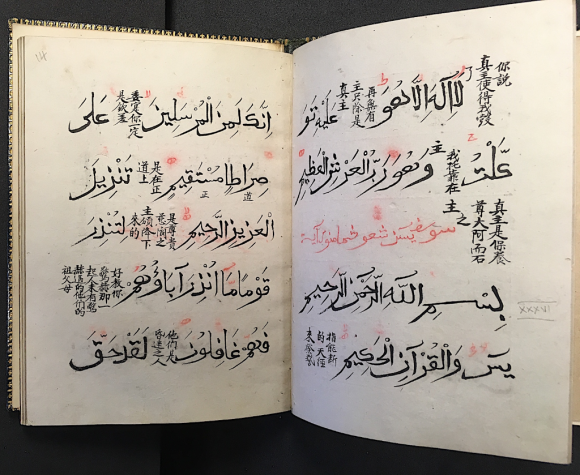 The beginning of Sūrah 36, Yasin from a nineteenth-century Qur'an with Chinese translation, formerly belonging to the presumably Muslim Admiral at Amoy (BL IO Islamic 3440, f. 13v-14r)

This Qur’an has an interesting history. It was presented to the India Office Library in 1883 by Hugh W. Gabbett, whose father Lt. (later Major General) William. M. Gabbett of the Madras Horse Artillery was Lord Gough’s aidedecamp when Amoy (Xiamen) was taken in 1841 during the First Opium War. A faded note in pencil on folio 1r by William Gabbett describes it as “A Koran found by me at Amoy found in the Admiral’s House. W. M. Gabbett” and “The most valuable Book yet found in China. W. M. G.”