Patani is a culturally Malay-Muslim region located on the northeast coast of the Malay peninsula, in the southern part of Thailand. It has long been renowned as a cradle of Malay art and culture, and especially as a centre for Islamic learning, with close links with the Holy Cities of Arabia. Patani has produced many notable Islamic scholars, the most prominent being Daud bin Abdullah al-Patani (1769-1847), who lived and wrote in Mecca in the first half of the 19th century. scholars, and Wan Ahmad al-Patani (1856-1908), the first Superintendent of the Malay press in Mecca. Patani is one of the great centres of the Malay manuscript tradition, and many manuscripts from Patani are now held in the National Library of Malaysia and the Islamic Arts Museum Malaysia in Kuala Lumpur. 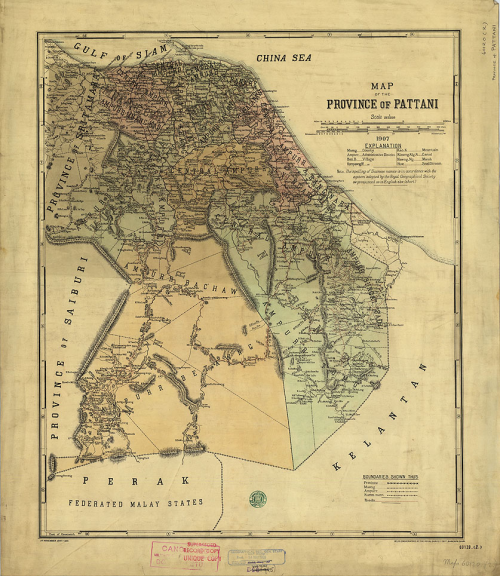 From the 14th century onwards, throughout Southeast Asia the Malay language was written in an extended version of the Arabic script known as Jawi. However, during the course of the 20th century the use of Jawi declined rapidly, and today in Malaysia, Indonesia, Singapore and Brunei the Malay/Indonesian language is normally written in roman script. Perhaps because of Patani’s location within Thailand, and a system of state education not rooted in roman script, competency in Jawi appears to have lasted longer in Patani than perhaps anywhere else in Southeast Asia. This means that uniquely in Patani, Malay manuscripts written in Jawi have been produced until recently, including, for example, some elaborately decorated hand-written copies of the text Sejarah Kerajaan Negeri Patani, ‘History of the Malay Kingdom of Patani’, by Ibrahim Syukri, which was first published in 1958 and contains references to post-war events. 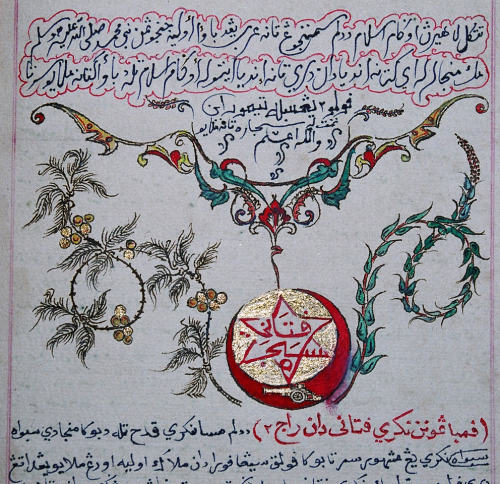 Ingeniously decorated late 20th-century manuscript of Sejarah Kerajaan Negeri Patani, showing the start of the second chapter, Pembanganunan negeri Patani dan raja2, ‘The development of Patani and the descent of its rulers’. PNM MSS 3632, reproduced courtesy of the National Library of Malaysia.

The British Library holds two manuscripts probably from Patani, both of which may have been copied very recently, and which have been fully digitised. One contains a well-known Malay tale, Hikayat Raja Khandak dan Raja Badar (Or.16128), set during the early wars of Islam, in which the eponymous villain, Raja Khandak (known in some versions as Raja Handak or Raja Handik) and his son Raja Badar battle against the forces of the Prophet. It was a very popular story, and is also found in Javanese, Sundanese, Acehnese and Makassar versions. At least 24 Malay manuscripts of this work are known to be held in collections in Indonesia and Europe, copied in locations ranging from Batavia to Singapore, and including another copy in the British Library which was copied in Semarang in Java in 1797 (Or. 14350). 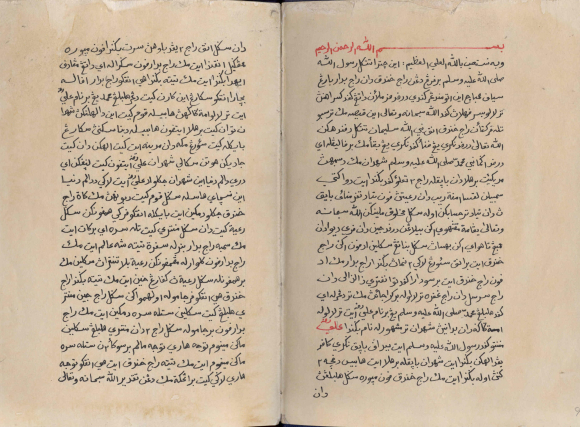 The colophon of Or. 16128 is dated 9 Rabiulawal 1224 (24 April 1809) in the state of Reman (or Raman), which is one of the principalities of Patani, but it is likely that this date refers to the completion of an earlier source rather than that of the present manuscript. This is by no means an unusual scenario; many manuscripts from the Malay world are encountered with colophons that give a date which for codicological reasons (perhaps the use of dated or dateable watermarked paper) evidently predates the the manuscript in question, and therefore can be assumed to apply to the source text rather than the present copy. For example, the British Library holds two copies of the Malay narrative poem Syair Jaran Tamasa, one with a colophon stating it was copied by Ismail on 29 Muharam 1219 (10 May 1804), and another manuscript evidently copied from the former, reproducing exactly the same colophon and date, but which then continues to state that the present copy had been made for Raffles by Muhammad Bakhar. 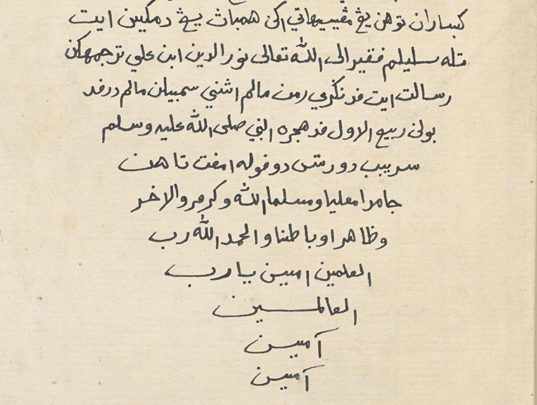 Although the study of Malay palaeography or handwriting is not greatly advanced, it can be said that the writing of this manuscript – in a neat but slightly jerky hand – has a rather ‘modern’ feel. The use of the superscript abbreviation r.ḍ.h for the honorific raḍiya Allāh ‘anhu, ‘May God be pleased with him’, following the names of the Prophet’s companions, is not common in Malay manuscripts. The most unusual feature, though, is that rubricated words have been written in red ink above a pencil outline. This probably indicates that Or. 16128 followed the same pattern of rubrication as its source text, and that while writing the scribe used pencil to indicate words to be rubricated, and then later overwrote the pencilled outlines in red ink. Although rubrication is very common in Malay manuscripts, there are almost never signs of pencil outlines; instead, the scribe wrote directly in red ink. These pencil outlines therefore suggest a manuscript copied outside of (or subsequent to) the mainstream manuscript tradition. 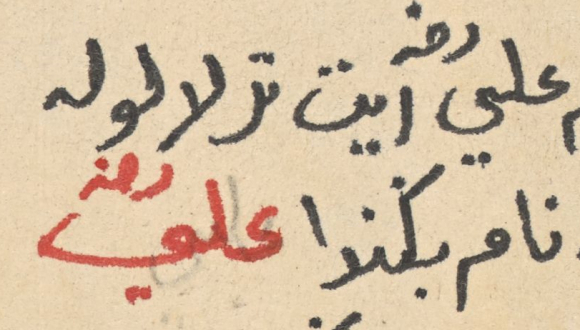 The second manuscript aquired from the same source, Or. 16129, consists of only 11 folios and contains an unidentified religious work (or fragment of a work) by Imām Aḥmad (the Sunni jurist Aḥmad bin Ḥanbal, 780-855) on the shahādah (profession of faith), set within frames with a commentary written in the margins. The main text has a colophon stating that it was written on 24 Muharam 1[2]60 (14 February 1844) in Mecca. This manuscript is also written in a small neat hand with a ‘modern’ feel, but in this case modern influences are clearly manifest in the use of certain punctuation elements such as brackets and numbered points within the text, indicating a date of production in the 20th century and perhaps even suggesting that the manuscript might have been copied from a printed source. 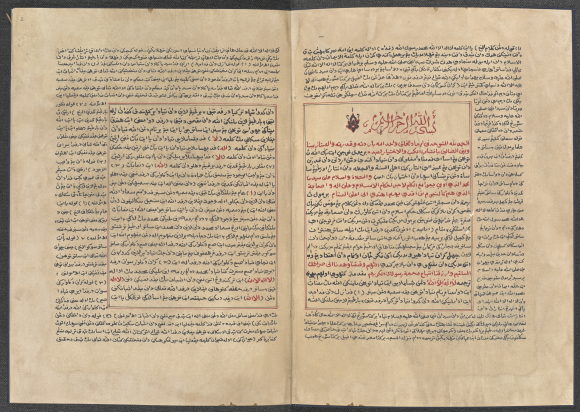 Opening pages of the text by Imām Aḥmad on the shahādah, with brackets around the rubricated words on the left-hand page. British Library, Or. 16129, ff. 1v-2r

A general inference can be made on palaeographical grounds that both these manuscripts are modern copies of older sources, and have reproduced verbatim the colophons in the original texts, although this assertion has not been proved scientifically. Both manuscripts are written on cream laid paper with vertical chainlines but with no visible watermark, and so it has not been possible to use features of the paper to date the manuscripts. In 2012, Rajabi (Shasha) Abdul Razak, a doctoral student from the International Islamic University of Malaysia, spent three months in the Conservation section of the British Library to analyse inks in Malay manuscripts using Multi-Spectral Imaging (MuSIS). I asked her to investigate the black and red inks used in Or. 16128, but the results were not conclusive for dating purposes.

Even if Or. 16128 and Or. 16129 were only copied very shortly before they were acquired by the British Library in 2005, they are still of value in testifying to the presence and circulation of their source texts. Despite the wide popularity of the story Hikayat Raja Khandak, no other copies are known from the northern Malay peninsula, and it is thus thanks to Or. 16128 that we know that this story was part of the literary heritage of Patani in the early 19th century. 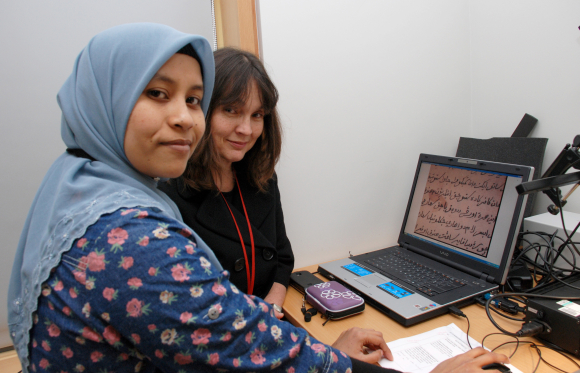 Rajabi Abdul Razak, from the International Islamic University of Malaysia, who visited the British Library in 2012 to study the inks used in Malay manuscripts, with ATG. Photograph by Elizabeth Hunter.

Center for Patani Studies - a website for the study of Patani's history, culture and society edited by Francis Bradley