New Online Resources on the History of Kuwait

A series of archival documents that contain a wealth of information about Kuwait during the 1930s and 1940s have recently been digitized and uploaded on to the Qatar Digital Library. These documents are preserved in a file from the archive of the British Political Agency in Kuwait (now a part of the India Office Records) and consist of several reports covering a broad range of topics including Kuwait’s geography, history, flora and fauna, climate, leading personalities and political structure. In addition to what the files themselves discuss, as colonial records, they also illustrate the extent of British influence in Kuwait at this time, as well as provide a rich illustration of how Kuwait was conceptualised and recorded by British officials that were based in the country 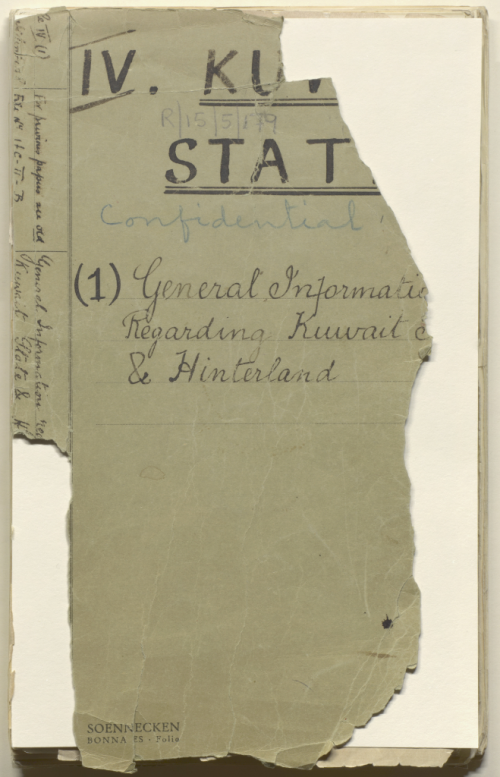 The majority of the reports in the file are written by Lieutenant-Colonel Harold Richard Patrick Dickson (1881-1959), who served as Britain’s Political Agent in Kuwait from 1929 until 1936. Dickson continued living in Kuwait after serving as Political Agent (a role he held again temporarily in 1941) and stayed in the country until his death in 1959. During this time, Dickson wrote two books about Kuwait and the surrounding area, the encyclopaedic – if shamelessly Orientalist – work The Arab of the Desert: a Glimpse into Badawin [Bedouin] Life in Kuwait and Sau'di Arabia (George Allen & Unwin, 1949) and the later Kuwait & Her Neighbours (George Allen & Unwin, 1956) that was edited by the writer Clifford Witting. Both books, notably the former, reveal Dickson’s near obsessive interest in the minutiae of the history, culture and everyday life of the people of Kuwait and Gulf region, with a particular interest in the customs and traditions of the Bedouin. 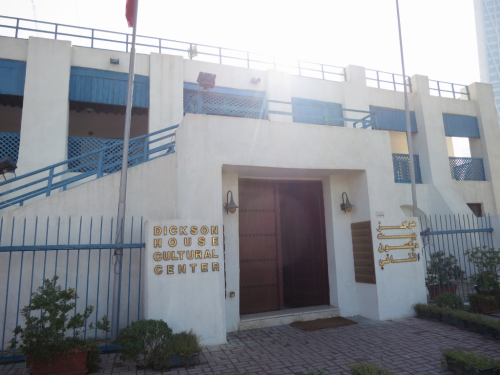 The reports written by Dickson in 1933 contain a diverse range of detailed information including descriptions of car routes between Kuwait and various other settlements in the region (including Basrah, Riyadh, Hasa and Qatif), insightful and frequently scathing character assessments of prominent figures in the country, as well as sketches of the different types of boat used in the country and lists of the species of fish in its waters. It is likely that the information contained in these notes was used by Dickson at a later date to compile his published works. For instance, The Arab of the Desert contains drawings of the different types of sailing vessel in Kuwait that are very similar to the aforementioned sketches contained in Dickson’s notes from almost two decades before. 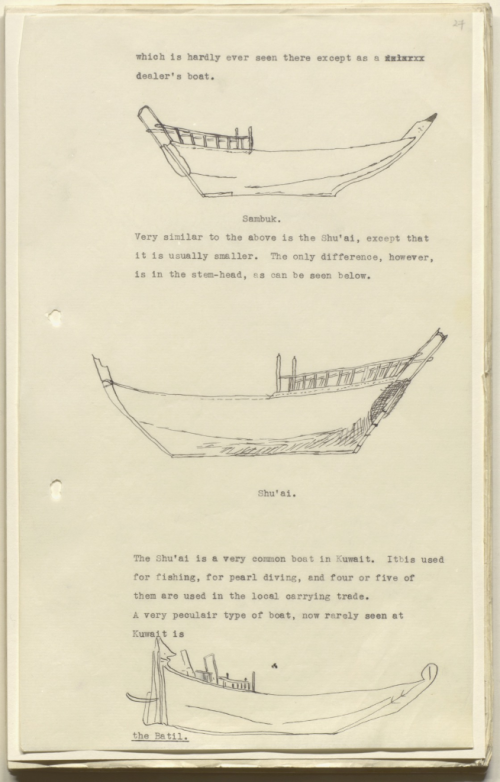 Examples of boats used in Kuwait, 1933

In addition to Dickson’s reports, the recently digitised file contains a secret report on Kuwait that the Australian explorer, Alan Villiers – author of the well-known study of Arab sailors, Sons of Sinbad – was commissioned by the British authorities to write in 1939 (folios 160-183). The file also contains reports written by two of Dickson’s successors as Political Agent in Kuwait in the 1940s, Major Tom Hickinbotham (folios 187-198) and Major Maurice O’Connor Tandy (folios 226-228) as well as a Who’s Who of the leading personalities in Muscat (Oman) written by Captain J B Howes, the Political Agent in Muscat in 1942 (folios 199-209).

The full contents of this fascinating file – all written by Dickson unless stated otherwise – are as follows:

Posted by Ursula Sims-Williams at 1:33 AM