A Judeo-Persian epic, the Fath Nama (Book of Conquest)

While art historical research has focussed on the beauty and splendour of Persian miniature paintings, the study of Judeo-Persian manuscript art has lagged behind, receiving only more recently the attention and recognition it deserves. These paintings form part and parcel of manuscripts that have been copied in Judeo-Persian, that is a dialect or dialects of Persian heavily influenced by Hebrew and Aramaic and written in Hebrew script. The major obstacles to studying these significant hand-written books have been a lack of knowledge of the language, unfamiliarity with the Persian and Judeo-Persian literary traditions, and also with the history of Persian manuscript art in general. 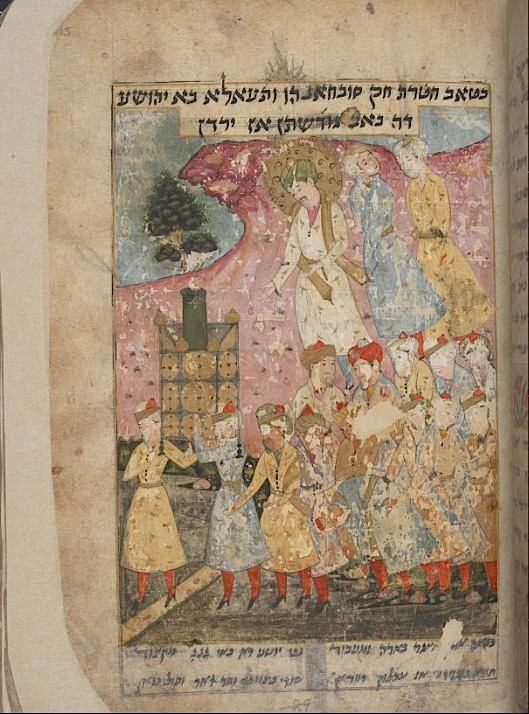 Joshua and the Israelites carrying the Ark of the Covenant and crossing the Jordan river, from the Fath Nama, Iran, gouache on paper, end of 17th or beginning of 18th century. The elaborate raised halo over Joshua's turban is a motif borrowed from Persian iconography, where it is especially associated with prophets (British Library Or 13704, f. 15r)

Persian manuscript art flourished particularly under the Safavid rulers (1502-1642) who deliberately encouraged the artistic expression of various population groups within their kingdom. The Safavid shahs not only patronized manuscript art, but some were gifted calligraphers and painters in their own right. As a result, during the Safavid period, the art of miniature painting spread from the royal workshops to the smaller aristocratic courts and ateliers, eventually reaching the marketplaces of Persia’s major cities. It was in these centres that the popular, provincial style of Persian manuscript art – to which the Judeo-Persian paintings belong – was born. Judeo-Persian manuscript illustration reached its pinnacle between the seventeenth and nineteenth centuries.

In terms of their content, Judeo-Persian illustrated manuscripts can be divided into two main categories: a) Hebrew transliterations of Persian classic works such as those of Jami (1414-1492) and Nizami (1140-1202), two giants of the Persian literary tradition; and b) original works by prominent Jewish-Persian poets such as Mawlana Shahin Shirazi (Our Master the Royal Falcon of Shiraz, 14th century) and Imrani of Isfahan (1454–1536). Among Shirazi’s epic compositions are the Musa Nama (the Book of Moses) dated 1327 which contains narratives from the Pentateuch and has around 10,000 couplets (consisting of two rhyming hemistiches), and the Bereshit Nama (Book of Genesis) which he completed in 1358, comprising over 8,000 verses. 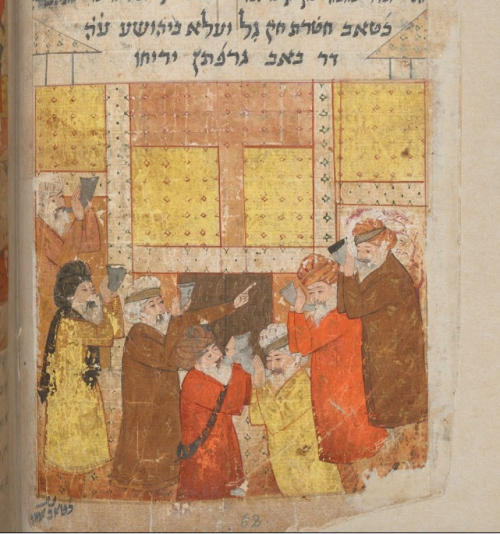 Seven Priests blowing seven horns in front of the Walls of Jericho, from the Fath Nama, Iran, end of 17th or beginning of 18th century (British Library Or 13704, f. 31v)

Composed around 1474, Imrani’s epic Fath Nama (Book of Conquest) is a poetical paraphrase of narratives from the biblical books of Joshua, Ruth and Samuel, consisting of about 10.000 verses.   Imrani endeavoured to uplift the biblical story to the level of the Persian epic, combining in his works Jewish and Islamic legendary and literary material. He is known to have written ten full compositions all of which except three deal with Jewish themes. Imrani’s works are permeated with a deep sense of exile and isolation and a pessimistic view of human condition. While composing the Fath Nama, Imrani had the support of a patron – Amin al-Dawlah (Trustee of the State) who was most probably a wealthy man, perhaps an official in the city of Isfahan. When his patron passed away, Imrani abandoned his work, resuming it only after he had found another patron named Rabbi Yehuda. 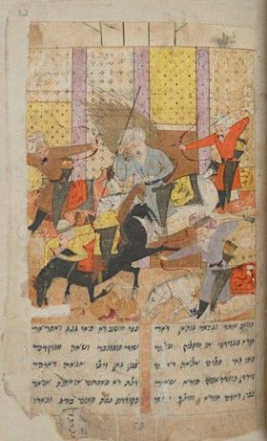 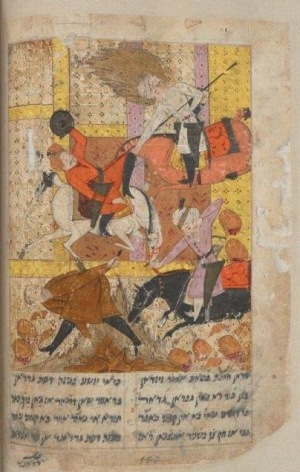 Or 13704, the Fath Nama manuscript illustrated here, contains seven coloured illustrations[1] and numerous floral and faunal designs. The manuscript is incomplete, and, since it lacks a colophon, the exact date of its production and the names of its patron and creators are unknown. The assumption that the manuscript was written and decorated at the end of the seventeenth or the beginning of the eighteenth century is based largely on the style of its paintings and on the names of former owners’ inscriptions found within its pages. Several scribes were responsible for copying the text in a writing style characteristic of Persian Jews. 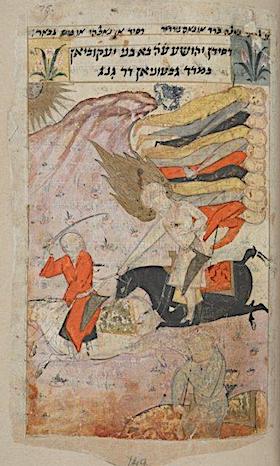 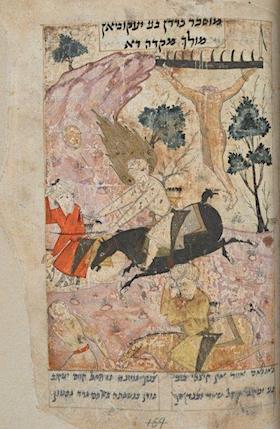 This manuscript is one of two known illustrated copies of this work. Acquired in 1975, it was purchased from the estate of David Solomon Sassoon (1880-1942), a renowned bibliophile of Baghdadi origin, who travelled extensively in search of books and manuscripts for his private library. His collection of 1,153 manuscripts is described in a two-volume catalogue published by Oxford University Press in 1932 under the title Ohel Dawid (David’s Tent). Thanks to the Polonsky Foundation, this manuscript has now been digitised and is available digitally on our Digitised Manuscripts site to explore cover to cover.

[1] Folio 90v, the only illustration not included here, contains an unfinished sketch in outline of Joshua in battle against the five Amorite kings.