The oldest example of Thai script printed in Europe

Formal relations between Great Britain and Thailand were established in 1612 when a letter from James I to the Thai King Songtham travelled on the ship The Globe via Patani in the Gulf of Siam, and finally arrived in the capital Ayutthaya in August or September 1612. Following this, permission was given to British merchants to trade in Siam, and subsequently to explore trading opportunities in the northern Thai kingdom of Lanna, which had been visited in 1587 by the adventurer Ralph Fitch, the first Englishman known to have set foot in Thailand.

In January 1684, during the reign of the pro-foreign King Narai, an embassy from Ayutthaya set sail for France via Great Britain. The ambassadors Khun Phichai Walit and Khun Phichit Maitri were accompanied by the missionary Bénigne Vachet, who spoke Thai. They met Charles II on 26 September 1684. The 17th-century writer, thinker and bibliophile John Evelyn noted in his diary: "26th of September [1684]. There was now an ambassador from the King of Siam, in the East Indies, to His Majesty" (Evelyn 1955: 4.388). On this occasion a manuscript Thai syllabary with numerals, with Romanised equivalents, all written in a sloping hand, was presented to Charles II. 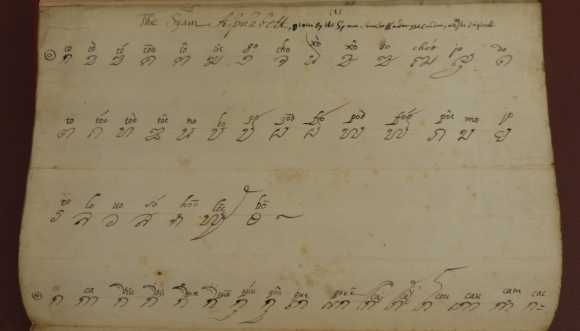 Detail of the first page of a handwritten syllabary listing the Thai consonants (first three lines) and some vowels (bottom line) with Romanised equivalents, circa 1684. British Library, Reg.16.B.IV, f.1

The scribe of the document is not mentioned – perhaps it was compiled by one or both Thai ambassadors working together with Bénigne Vachet. It can be assumed that its purpose was to further written communications between Great Britain and Siam. However, British trading activities in the Thai kingdom came to an abrupt end with the Siamese revolution and the overthrow of King Narai in 1688. 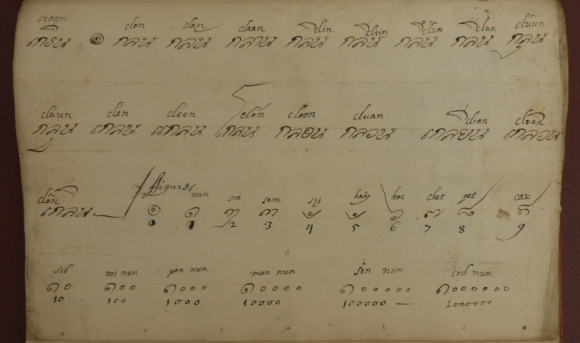 Detail of the third page of the Thai syllabary listing certain syllables and numerals at the bottom, circa 1684. British Library, Reg.16.B.IV, f.3

The Thai syllabary passed into the possession of Thomas Hyde (1636-1703), the king's translator. Hyde was a Cambridge-educated Orientalist, who became Hebrew Reader at Oxford in 1658, and was appointed librarian-in-chief of the Bodleian Library in 1665. He had a strong interest in Asian languages and was well known for his knowledge of Arabic, Hebrew, Malay, Persian, Syriac and Turkish. After Hyde's death in 1703 the syllabary was one of many Oriental manuscripts purchased from his estate for the Royal Collection, and is listed in a catalogue as 'The Syam Alphabet, with their numbers' (Casley 1734: 248). The syllabary then remained in the Royal Collection until 1757, when George II gave the library to the British Museum which had been established four years earlier following the bequest of Sir Hans Sloane’s collection to George II for the nation. The approximately 2000 manuscripts and 9000 printed books of the Royal Collection are now held at the British Library. 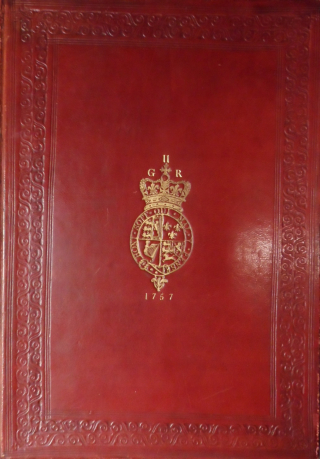 Hyde appears to have commissioned a copper-plate engraving of this handwritten Thai syllabary from Michael Burghers (1647/8 – 1727), a Dutch engraver who resided at Oxford for most of his life, and who was the printer used by Thomas Hyde for most of his experiments with typography. Burghers worked mainly for the university and booksellers, but was also employed by the English aristocracy. Although Burghers produced numerous portraits of scholars and aristocrats, including one of Charles II, he became known best for his engravings of antiquities, artefacts and ruins. In a letter of 19 April 1700 to Thomas Bowrey, compiler of the first Malay-English dictionary, Hyde states that he is sending him copper-plates of two Siamese and one Sinhalese alphabets, for which the engraver had charged £5 (British Library, MSS Eur E 192).

Hyde's own copy of the two-page print of the Thai syllabary was also acquired for the Royal Collection, and entered the British Museum in 1757. Here it was bound in red leather together with prints of the Sinhalese and Tatar alphabets, Chinese numbers, weights, measures, directions etc., all engraved by Burghers. Each of the prints is marked with “MBurg. sculp.” in the right bottom corner. The prints were first published in a collection of Hyde’s works, edited by Gregory Sharpe, with the title Syntagma dissertationum quas olim auctor doctissimus S.T.P. separatim edidit (Oxford, 1767). 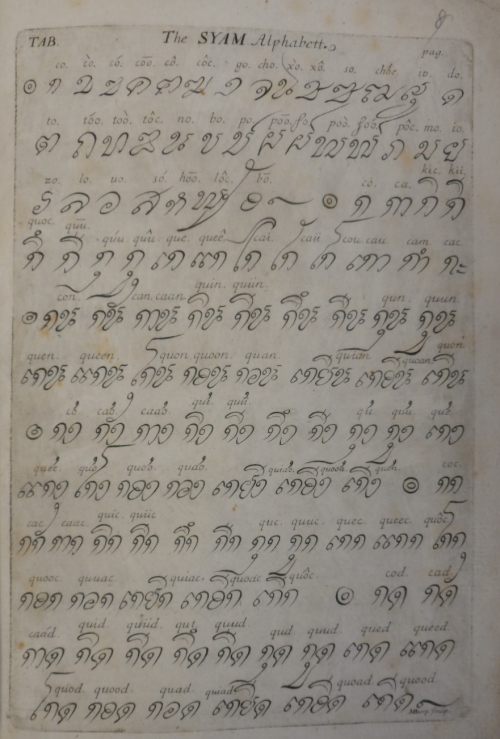 Engraving of the Thai alphabet and syllables, based on the handwritten syllabary presented to Charles II in 1684. British Library, Or.70.bb.9, f.8 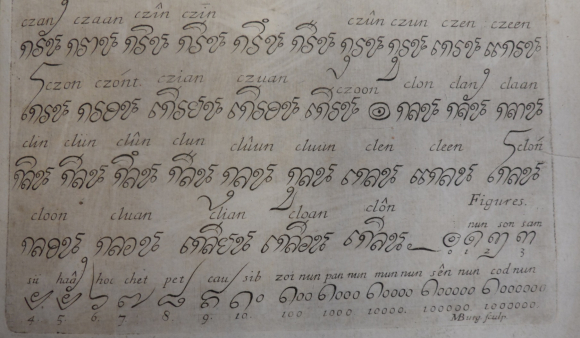 Detail of Michael Burghers‘ copper print of the Thai syllabary with Romanised equivalents, and with numbers at the bottom, 1700. In the right bottom corner, Burghers signed his work: „Mburg. sculp.“ British Library, Or.70.bb.9, f.9

Burghers' work, which can now be dated to 1700, is the oldest known example of Thai script printed in the West. Older Chinese woodblock prints of Thai script were produced at the end of the 16th century as a part of multi-language vocabularies, known as Hua Yi Yi Yu, after a section for the Thai language was established at the translators’ institute of the Ming government in 1579.

Casley, D. A catalogue of the manuscripts of the King's Library. London, 1734.

Posted by Annabel Gallop at 2:40 PM