One striking feature of South East Asia is its traditional markets. They can be easily set up in any available space in communities, with vendors laying out their goods on makeshift stalls or on street pavements. Despite global and international retail chains mushrooming in many parts of the region, traditional markets are still going strong and in many areas are making a comeback.

In Vietnam, traditional markets have played a vital part in daily life, especially in the past when people still lived under a self-sufficient and rural economy. Markets provided a place where they could trade their daily necessities, while socialising and exchanging local news. Their importance is best expressed by the Vietnamese proverb “A market has its regulations; a village has its customs.” Vietnamese traditional markets come in different forms and sizes, from a tiny and basic hamlet market, to a more substantial village market which takes place where roads meet, or a town market, which also has proper shop houses (buildings which combine a shop with simple living accommodation for the trader). Markets can be held on any day but are usually busiest on the 2nd, 6th, 12th, 16th, 22nd, and 26th of the lunar month (Hưu Ngọc 2012: 178) . The origins of the Vietnamese traditional market can be traced back from written records to the end of the 13th century. In 1293 Trân Phu, a Chinese envoy of the Yuan Dynasty (1279-1368) who travelled through Vietnam during the Trầ n Dynasty (1226-1400), made a note in his records (An Nam tức sự) that “Vietnamese markets took place every two days. Hundreds of goods were laid out. A building of three rooms width with four bamboo benches was erected at every five (Chinese) miles as a place for a market.” (Trịnh Khắc Mạnh 2015: 6). 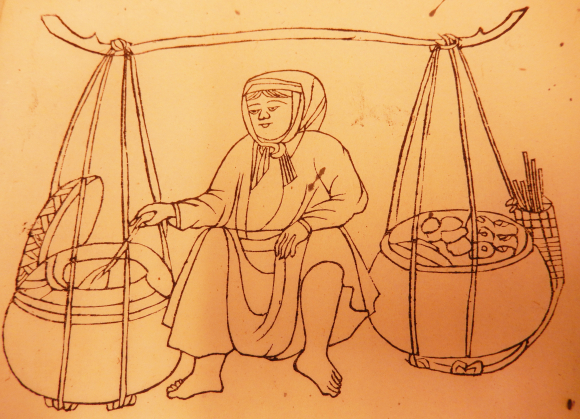 In the past, markets were not only a place for businesses but they served as a community’s centre where locals were able to socialise. In addition to being able to sell or buy goods, both traders and customers also had a chance to meet up and exchange or gather news about their neighbours and communities. A market was a place where other daily activities took place, as this folk song about a girl looking for a man of her dreams demonstrates: “I’m like a length of rose silk / Waiting in the market for the right buyer” (Hưu Ngọc 2012: 178). 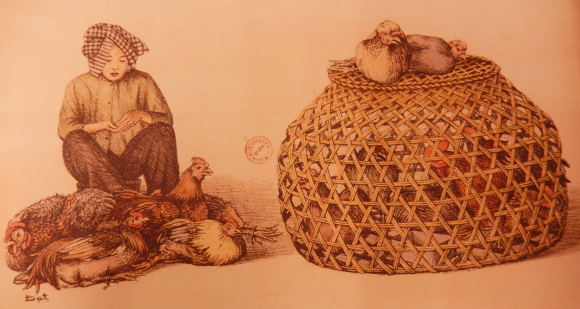 Markets in small villages or communities required no permanent fixtures. They could be easily set up with makeshift stalls, benches or even just a piece of cloth laid out on the bare ground. Markets in towns were generally bigger and would also have permanent shop houses. In the 18th and 19th centuries in prominent towns such as Sài Gòn, Hà Nội or Huế there were markets that specialised in one particular trade, such as clothes, paper, tin and copper household utensils, and leather. Street names in the old quarter of Hà Nội clearly reflect the specific commercial history of parts of the city as each name gives you a clue as to what you could expect to buy from the area. For example, Phố Hàng Đào was a place where you could buy silk or fabric, Phố Hàng Bạc specialised in silver products whereas Hàng Chiếu would have plenty of sleeping mats for you to choose from. Some of these traditions still carry on to the present day. 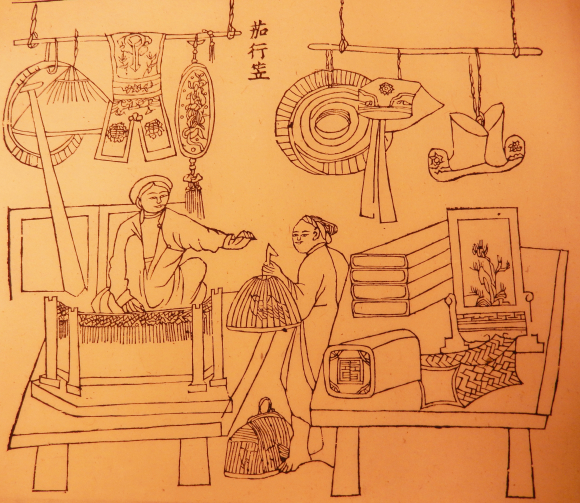 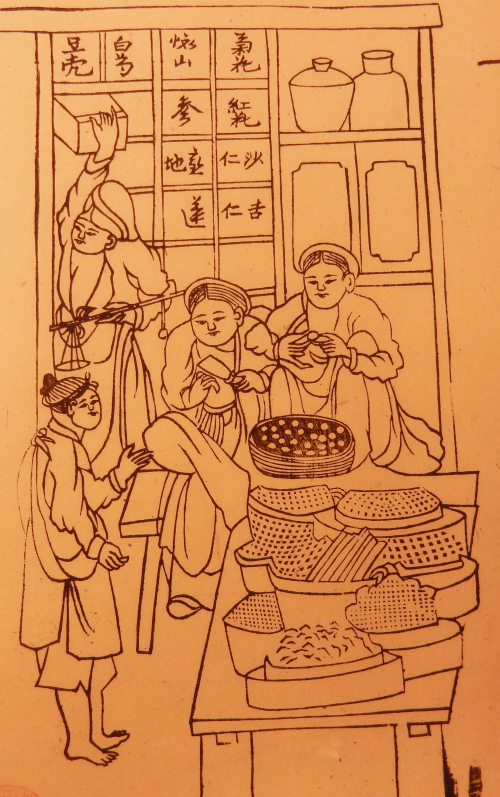 Records of western travellers to the region in the 19th century also give good accounts of what traditional markets were like. George Finlayson, a surgeon and naturalist attached to the Crawfurd Mission to Siam and Vietnam in 1821-1822, gave an account of the principal market in Huế, which he visited on 3rd October 1822, as follows:
“It consists of a spacious street about a mile in length, with shops on either side of the whole of its length. Many of the shops are mere paltry huts, made of palm leaves; the rest are more substantial houses, constructed chiefly of wood, and have tile or thatched roofs. Here also, the poverty of the shops was particularly striking. A very large proportion contained nothing but shreds of gilt and coloured paper used in religious ceremonies and at funerals. Chinese porcelain, of a coarse description; fans, lacquered boxes, Chinese fans, silks, and crapes, the two latter in small quantity; medicines without number, coarse clothes made up, large hats made of palm-leaf, and a sort of jacket of the same material; rice, pulse, and fruit; sago … were the common articles exposed for sale. There were but few, and those very coarse articles of manufactured iron, as nails, hatches, and chisels, which bore a high price …” (George Finlayson 1826: 371-2). 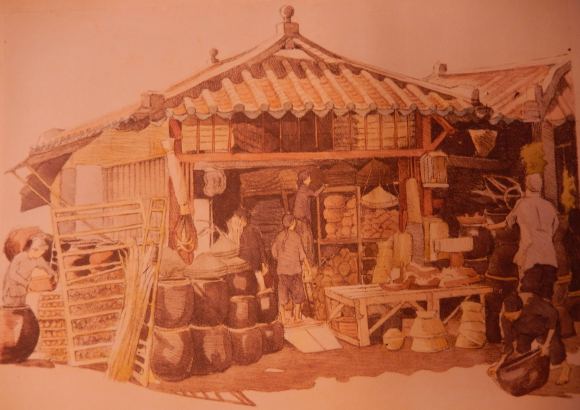 The British Library is fortunate to hold some items which depict Vietnamese markets at the beginning of the 20th century. The three-volume set of Introduction générale a l’étude de la technique du peuple annamite by Henri Oger, published in Paris in 1909 (Or. TC 4) has detailed and informative drawings of daily activities of the Vietnamese in and around Hà Nội in the first decade of the 20th century. In addition to this finely illustrated item, the Ký Họa Về Đông Dương: Nam Kỳ (OIJ.915.97) depicts daily life activities of the Vietnamese in the Gia Định-Sài Gòn area in the 1920’s-1930’s. The item in our collection is a 2015 re-publication of the Monographie Dessinée de L’Indochine: Cochinchine, first published in Paris in 1930. It is a collection of beautiful drawings from the Gia Định School of Drawings (Trường vẽ Gia Định or Ecole de Dessin, founded in 1913, the predecessor of the present University of Fine Arts, Hồ Chí Minh City). Both items are wonderful historical records of the lives of Vietnamese commoners at the turn of the 20th century.