Bestiary of Fears – an artist’s inspiration from illustrated Hebrew manuscripts

Today's  post is by guest contributor Jacqueline Nicholls, a London based visual artist and Jewish educator. She uses her art to engage with traditional Jewish ideas in untraditional ways. She co-ordinates the Art Studio and other Arts & Culture events at JW3, and regularly teaches at the London School of Jewish Studies. Jacqueline’s art has been exhibited in solo shows and significant contemporary Jewish Art group shows in the UK, USA and Israel, and she was recently artist-in-resident in Venice with Beit Venezia. Jacqueline is a regular contributor to BBC R2 Pause for Thought

In the Jewish religion the seven weeks between the freedom festival of Passover and the festival of Pentecost is called the Omer. It is traditional to ritually count every day of these seven weeks and to use this time for personal spiritual transformation. For the last couple of years I have used this time for art projects, and I have undertaken this counting as a daily drawing practice, exploring different themes each year.

In 2016, I was invited to make use of the online digital Hebrew manuscript collection of the British Library and give feedback on how this resource could be useful for artists. I used this as an opportunity to explore the collection with a very personal project: The Bestiary of Fear. If this time is one of personal transformation, the focus for this project was to be on the things that terrify and paralyse the self and prevent growth. The etymology of the word ‘monster’ and the word ‘to demonstrate’ have the same root. They issue out an omen, bring forth a warning, and make visible that which is hidden in the dark. This Bestiary would be an externalising of the internal hidden fears, drawing them out to identify and demonstrate them, transforming the fears into finite monsters that can be contained, and hopefully, overcome.

The process of making this Bestiary was one of daily introspection; by contemplating my vulnerabilities, I was able to identify the fears I wanted to explore through this project. This introspection was followed by searching through the collection items included in The Polonsky Foundation Catalogue of Digitised Hebrew Manuscripts to find forms that resonated with the fears I had identified. I was drawn to the strange animals and fantastical beasts in the marginalia, and decided to focus on adapting them to develop the drawings for the Bestiary of Fears.

Seven manuscripts were selected for this project, exploring one each for a week of the seven-week Omer. They were: The Barcelona Haggadah (Add MS 14761), The Yonah Pentateuch (Add MS 21160, Prayer book (Add MS 26957), The Northern French Miscellany (Add MS 11639), The Hispano-Moresque Haggadah (Or 2737), The Sister Haggadah (Or 2884), and The Golden Haggadah (Add MS 27210). As the Omer begins during the festival of Passover when the Haggadot would have been used, it seemed appropriate to primarily focus on the illustrations within the Haggadot in the British Library’s collection.

The beasties and monsters within these manuscripts are delightful and charming. Sometimes the connection with the text is clear, fulfilling an interpretive role of commentary. And sometimes their inclusion seems decorative with very loose connections to the content. There are breaks and dividing markers within the long body of writing and playful insertions in the margins. One of my favourites is the depiction of a dog licking its bottom on the page containing some special festive prayers in the Northern French Miscellany (Add MS 11639 f.232v). 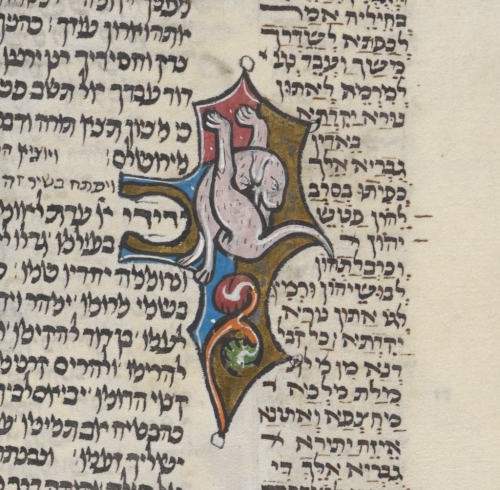 This whimsical and vulgar treatment is not found in modern day printed Hebrew prayer books, and contemporary Jewish religious culture is poorer for its exclusion. These are manuscripts that were made for a particular audience and therefore they can be intimate and personal in a way that printed books for a wider readership cannot.

An example of this can be seen in the Italian Prayer Book (Add MS 26957). This manuscript was created in 1469 for the patrons Menachem ben Shmuel and his daughter Maraviglia bat Menachem ben Shmuel. In this manuscript, mindful that it is made for a woman, the stage-directions for the prayers depict a woman and not a man as the active participant who performs the rituals. This is something that would be unusual to find in a mainstream printed Hebrew prayer book today. I was inspired by the woman on folio 55v, who is pointing to the blessing to count the Omer, as the inspiration for my Omer Drawings Day 24: Fear of Domesticity. To portray the fear I turned her pointing instructing finger into the gesture of an overbearing matriarch. 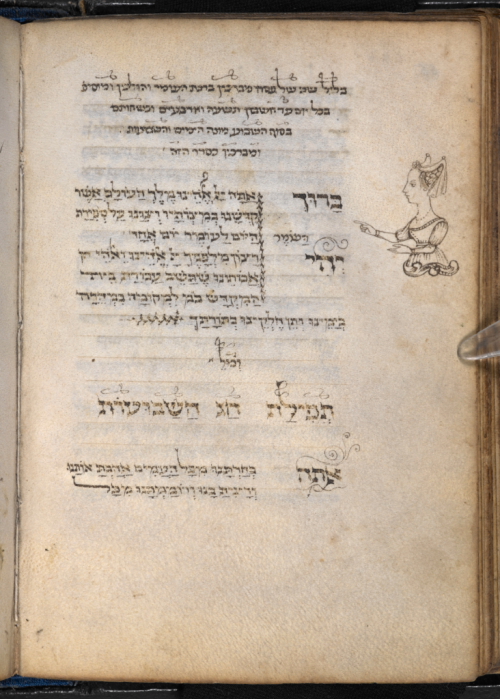 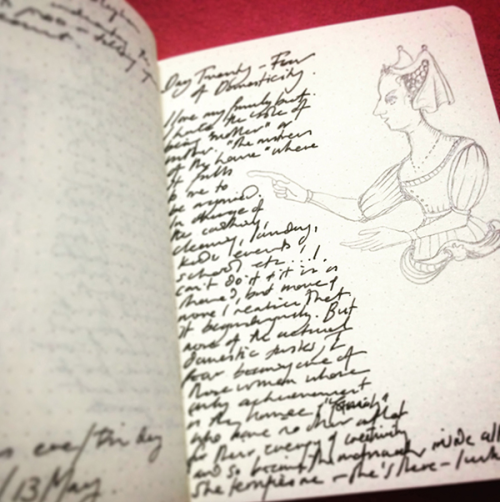 In the process of searching through the beasts in the marginalia looking for the right external form to match the inner emotion, I sometimes made connections with the text on that page. An example of this can be seen in Omer Drawings Day 5: Fear of Disapproval. This features a stern, condescending, and judgemental creature looking down his nose and frowning with contempt. The inspiration for this beastie was found in the Barcelona Haggadah (Add MS 14761) accompanying the introductory passage of the Four Sons (f33v.), where it describes how a parent should tell the Passover story to their different types of children. It seemed fitting for this fear, because there is nothing more disapproving than the patriarch who judges his children, who pigeon-holes them and finds them lacking. 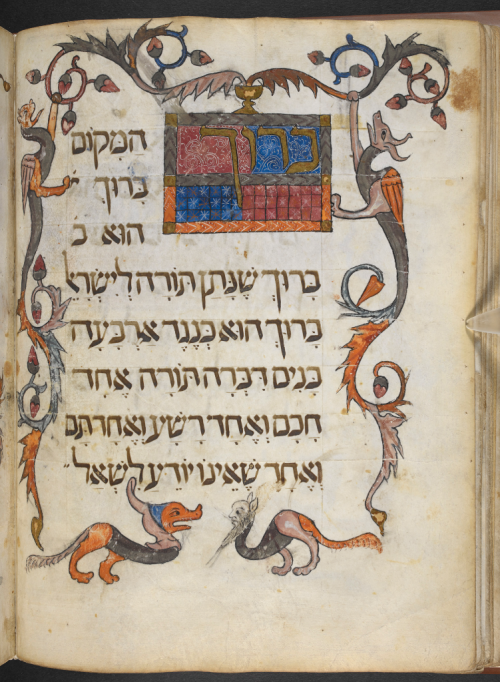 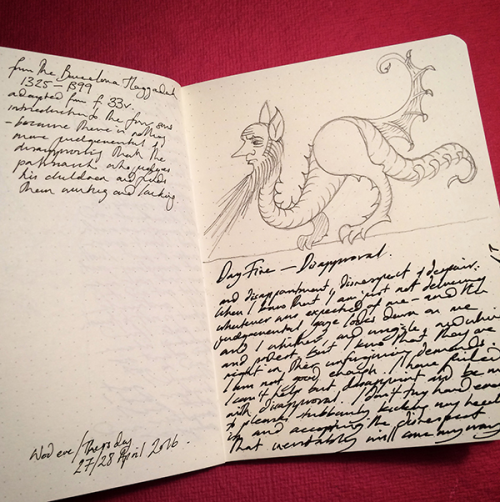 I was particularly struck by the nuance and detail of expression that were captured in these small and delicate drawings. The high quality of the photography and the ability to examine close details on the computer screen meant that the subtleties and sleight touches in the drawings can be scrutinised without damage to the original manuscript. As the online digitised manuscripts do not have a scale on the screen, one can only estimate the size of the original manuscript and accompanying illustrations by noting the width of the pen strokes.

In the Yonah Pentateuch (Add MS 21160), the text of the Five Books of Moses is decorated with micrography of patterns and beasts in the margins around the text. This unique Jewish scribal art form consists of weaving minute letters into abstract, geometric and figurative designs. In the section which tells the story of Jacob and Esau, there is a strange dopey looking dinosaur-like figure (f. 19v) that became the inspiration for my Omer Drawings Day 9: Fear of Messing Up. The narrative of Esau and Jacob is one of a relationship that does not run smooth, with patterns of deceptions and mistakes. 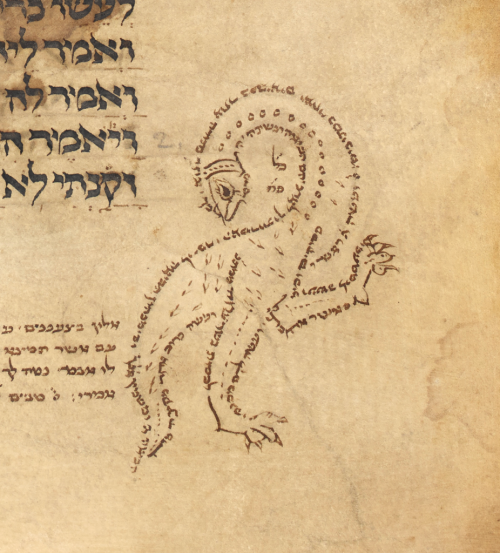 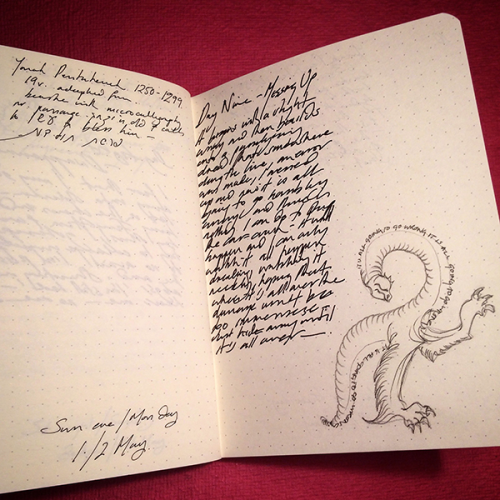 Discussions about definitions of Jewish Art tend to centre on the prohibition of making graven images in the Ten Commandments. This focus side-lines the history and existence of Hebrew illustrated manuscripts. It misinterprets a specific Rabbinic directive about idolatry, putting it into a wider context of disapproval of the plastic arts. This has resulted in a tendency to be suspicious of or to downplay the role of the visual within Jewish heritage. As an artist who engages with traditional Jewish texts, it was refreshing and inspiring to connect with the range and diversity of imagery within the Hebrew manuscript collection at the British Library, at the same time becoming familiar with the quirks, humour and artistry that exist within the tradition, a spirit that can be renewed for contemporary Jewish Art.

The complete Bestiary of Fears can be found online at Jacqueline Nicholls: Omer Drawings.