On January 3rd 1938, the BBC’s first ever foreign language radio station – BBC Arabic – made its inaugural broadcast. The station was launched in almost direct response to Radio Bari, the Arabic-language radio station of the Italian Government that had been broadcast to the Arab world since 1934. Radio Bari’s broadcasts consisted of a mixture of popular Arabic music, cultural propaganda intended to encourage pro-fascist sentiment in the Arab world and news bulletins with a strongly anti-British slant. British officials had initially been largely unperturbed by Italy’s efforts, but from 1935 onwards as Radio Bari’s output became more overtly anti-British and specifically attacked British policy in Palestine, they became concerned and began to discuss how Britain ought to respond. 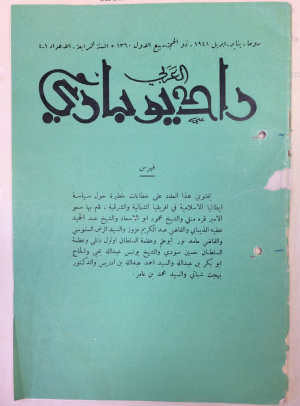 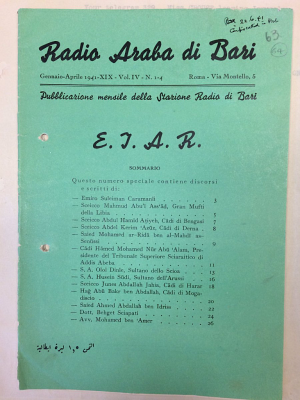 It was soon decided that Britain needed to establish its own Arabic radio station in order to counter Italy’s broadcasts. As the Secretary of State for the Colonies remarked in August 1937, “the time has come when it is essential to ensure the full and forcible presentation of the British view of events in a region of such vital Imperial importance”. Detailed discussions began over what form the station should take. In addition to logistical issues concerning content and where it should be based, British officials were concerned as to what type of Arabic should be used in its broadcasts. There was a keen awareness that in order for the proposed broadcasts to be both widely understood and taken seriously, making the appropriate choice linguistically was crucial. The Cabinet Committee that was formed to discuss the issue reported that the Arabic used in Radio Bari’s broadcasts in the past – speculated to be that of a cleric of Libyan origin – had been “open to criticism as being pedantic and classical in style and…excited the ridicule of listeners”. The potential for ridicule, in addition to the fact that many uneducated Arabs would struggle to understand it, made classical Arabic an undesirable choice. Yet given the significant variation in regional dialects that exists throughout the Arab world, the choice of a single dialect was equally problematic. British officials in the region possessed strong and sometimes divergent opinions about what course of action should be taken. 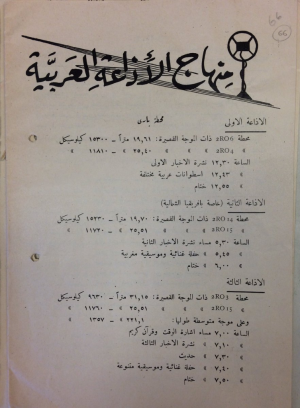 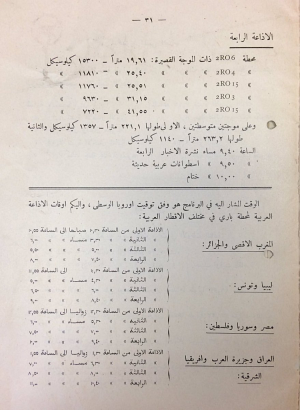 Britain’s Political Agent in Kuwait, Gerald de Gaury, believed that Nejdi Arabic was the ideal choice, arguing in March 1937 that the “Nejdi accent and vocabulary are accepted by all unprejudiced persons as the finest in Arabia” and form “the common denominator of the whole Arabic language”. He supported this assertion by providing quotations from the 19th century travelogues of Johann Ludwig Burckhardt (Notes on the Bedouins and Wahabys, 1831) and Charles Montagu Doughty (Travels in Arabia Deserta, 1888), both of whom stressed the supposedly uncorrupted nature of Nejdi Bedouin Arabic in comparison with – in Burckhardt’s words – “the low language of the Syrian and Egyptian mob”. De Gaury emphasised the importance of getting the decision right, noting that the Ruler of Kuwait – “who regretted the absence of an Arabic broadcast from London” – had commented to him on the poor grammar of the announcer used by Radio Bari. He argued therefore that there was “an excellent opportunity to be taken up by the British Arabic Broadcast Station of having a really first class man much more welcome than those of other foreign Arabic broadcasters”. In a further display of his simplistic understanding De Gaury concluded his argument by stating that “the Arab is far more language conscious than any other race”. De Gaury’s stance was more a reflection of a racist attitude then rife amongst British officials regarding the ostensible purity of Bedouin Arabs than of reality.

A more nuanced proposal was put forward by Robin Furness, a Professor of English at King Fuad University in Cairo who had been approached by the Foreign Office for his expert opinion. Furness had previously served as Deputy Director General of Egyptian State Broadcasting, as a Press Censor for the Government of the Mandate of Palestine and later served as Deputy Chief Censor in Egypt. He too stressed the importance of making the right decision, commenting that Radio Bari now employed a broadcaster who spoke "ungrammatical Arabic with a marked Levanese [sic] accent…those Palestinian Arabs who spoke to me about these broadcasts ridiculed the accent of the broadcaster: Egyptians…would have ridiculed it even more”. 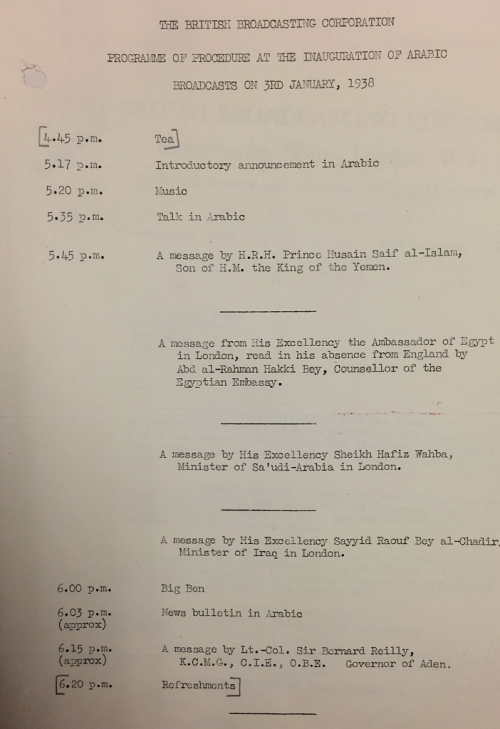 While Furness concurred with De Gaury regarding the importance of the decision, he did not agree as to what form of Arabic should be used. Furness explained that on Cairene radio, classical Arabic was generally used only for broadcasts that were related to religion, literature and history and that colloquial Egyptian was used only occasionally for stories or broadcasts intended for children. Otherwise, what Furness terms “Egyptian Nahwy” was generally used. Nahwy (literally ‘grammatical’) is a term used in Egypt to refer to classical Arabic (i.e. fusha), but it is clear that at this time it referred to something distinct. Furness elaborates on what he meant describing it as the way “an educated Egyptian would read prose, endeavouring to avoid grammatical errors, not indulging in what would be regarded as classical preciosities, and using so far as he can an accent which would be called ‘Egyptian’ but not e.g. ‘Cairene’, ‘Alexandrian’ or ‘Saudi’ [Sa’idi or Upper Egyptian]”. Furness gives the specific example of the pronunciation of ثلاثة أيام (three days) which, in Nahwy, would not be pronounced in the classical way as “thalāthatu ayāmin” nor in the fully colloquial Egyptian way of “talat ayām” but rather as “thalāthat ayām”. Furness argued that the announcer chosen for the British broadcasts should avoid colloquial dialects, eschew classical Arabic except for such purposes as Cairo radio used it (“otherwise he would generally be regarded as absurdly pedantic”), avoid grammatical mistakes as much as possible and use Egyptian Nahwy. He reasoned that as Egypt was “the largest and most advanced of the countries affected, and the centre of Islamic education. A broadcaster will be best understood by the most of the listeners, and least criticised, if he uses Egyptian Nahwy”. Aside from classical Arabic, he concluded, “it is the nearest approach to a common language”.

At this time, Britain already operated a local Arabic language radio station in the Mandate of Palestine and for this it utilised what the Cabinet Committee on Arabic Broadcasting referred to as Palestinian Nahwy. This committee acknowledged that although the type of Arabic to be used in the broadcasts for the Arab world as a whole “presents certain difficulties…these are not considered to be insuperable”. Through constructive comments on style and pronunciation it was believed that a “type of Arabic may gradually be evolved which would be palatable to the largest Arabic-speaking audience”. This succinct description brings to mind a form of Arabic that emerged in the 20th Century and is now usually referred to as Educated Spoken Arabic (ESA) or Formal Spoken Arabic (FSA). 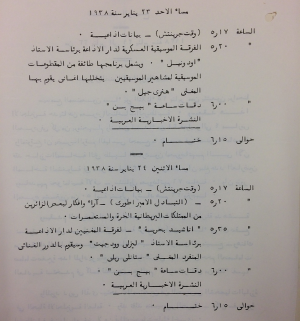 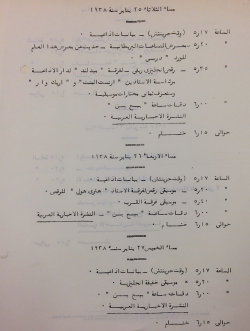 Sir Miles Lampson, Britain’s Ambassador in Cairo, was receptive to Furness’ argument regarding the use of Nahwy but believed that there could “be a conflict of opinion between him and those who advocate the use of classical Arabic, except in the exceptional cases of broadcasts for children, popular stories, humorous items etc”. Lampson also feared that although Egyptian Nahwy “approximates very closely to classical Arabic minus the inflectional terminations, there may be many who hold the view that to give an Egyptian flavour to material which was intended for general consumption in the Arabic-speaking countries might well detract from its wider effectiveness”.

Notwithstanding Lampson’s concerns, it appears that Furness’ argument was influential, for the first chief announcer appointed by BBC Arabic was an Egyptian named Ahmad Kamal Suroor who had previously worked for Egyptian radio. The first ever broadcast of BBC Arabic, that was announced by Suroor, can be listened to here. After its launch, BBC Arabic quickly became popular, Suroor in particular, who was praised by listeners as having “forcible and clear delivery”. 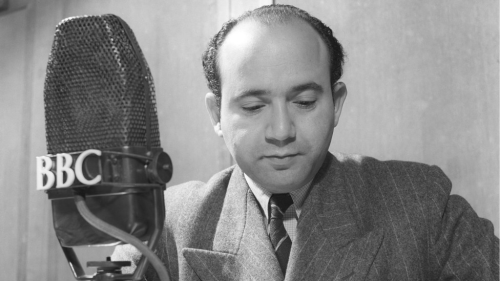 By September 1938, a secret report produced by the BBC was able to report that “[n]ative opinion” unanimously approved of both the type of Arabic used and the quality of the announcing in BBC Arabic broadcasts, which were said to “compare favourably with the performance of other stations broadcasting in Arabic”. Interestingly, the only adverse comments reported had come from Europeans, criticism which the BBC report argued could largely be discounted as it was “based on hasty impressions and incorrect information”. For instance, the report claimed that the specific criticism by some Europeans that the Egyptian accent of the announcers was “displeasing outside Egypt” was “not endorsed by native opinion”. The report quoted at length the thoughts of a “well-informed Englishman in Baghdad” who stated:

A friend told me the other day that he and his friends really enjoy listening to an Egyptian talking correctly in contrast to the best of the announcers from the local Baghdad broadcast, who was always getting his (vowel) points wrong.

One of the Europeans highly critical of BBC Arabic’s broadcasts was James Heyworth-Dunne, a senior lecturer in Arabic at the School of Oriental and African Studies, who attacked the technique of the announcers. The report commented that although Heyworth-Dunne claimed to voice the opinion of “every Arab to whom he has spoken on the subject”, his view directly conflicted with a large volume of evidence gathered from all parts of the Arab world. The report argued that since modern literary Arabic was an “artificial and bookish language” with no universally accepted fixed standards, discussions on disputed questions of grammar and style were to be expected and that few “achieve unquestioned correctness”.

Primary documents:
(These are all due to be digitised as part of the  Qatar Digital Library)

Posted by Ursula Sims-Williams at 12:01 AM