Kim Văn Kiều, or the Tale of Kiều, by Nguyễn Du (1765-1820), is a jewel in the crown of Vietnamese classical writing. In Vietnam, as Nathalie Huynh Chau Nguyen (2003: 18) points out, the Tale of Kiều has been embraced by the general public, who see it as a romance, a book of divination, and a moral fable, while scholars explore its literary, linguistic, philosophical, political and social aspects. The eponymous heroine is the most acclaimed lady in Vietnamese literature, and her captivating but tragic story has inspired many artistic depictions. The most outstanding version in the British Library collection is undoubtedly a manuscript which was completed around 1894 (Or 14844), written in Hán-Nôm with illustrations of scenes from the story on each page, and a fine yellow silk binding with dragon patterns. Shown in this post are a selection of images of Kiều from this beautiful manuscript, alongside more recent portrayals from printed books. 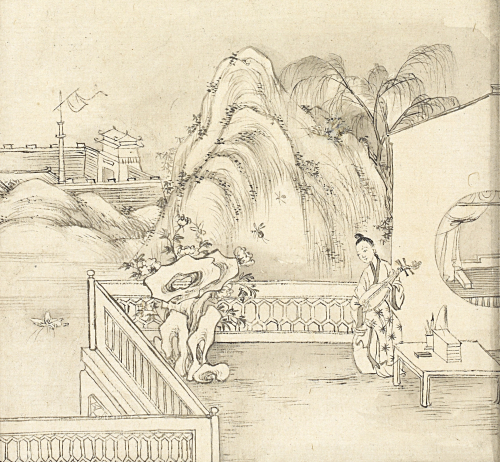 Literary critics have argued that the theme of the story is an allegory of Nguyễn Du’s guilt and conflict of interest in agreeing to work for the new regime (the Nguyễn dynasty, 1802-1945) which had been indirectly involved in the overthrow of his former master. This behaviour was unacceptable in traditional Confucian Vietnamese society as it was tantamount to betraying filial piety. Hence the theme of the story was a poignant reminder for Nguyễn Du, who was born into a high profile mandarin family, and whose father served as a high ranking minister under the Le dynasty.

Nguyễn Du was inspired by a Chinese Qing dynasty novel ‘The Tale of Chin, Yu , Ch’ia’ while he was leading a diplomatic mission to Beijing in 1813. He re-wrote the story by using ‘lục-bát’ or ‘six-eight’ verse form. The ’lục-bát’ was a commonly used and popular style in folk poetry and it was conducive to reciting. Its original title in Vietnamese is Ðoạn Trường Tân Thanh (A New Cry From a Broken Heart). However, it is better known as Truyện Kiều or Kim Văn Kiều.

The name of the story Kim Văn Kiều derives from the names of three important characters: Kim Trọng, Kiều’s fiancé and her first love; Thúy Văn, Kiều’s younger sister; and Thúy Kiều herself; the main protagonist being, of course, Thúy Kiều. Arguably the most recognised and stereotypical image of Kiều is of her playing a musical instrument, usually depicted either as a Ho guitar or a p’i p’a lute. In his English translation of the story, Lê Xuân Thủy describes her talents and beauty: "The bow of her eyes looked like two graceful autumn waves ... flowers envied her brightness, and willow shivered for not being so clear. With one sidelong glance, then another, she could subvert empires and put cities in revolution ... Being a thorough master of the Cung Thương five-tone scale, she excelled chiefly in playing Ho guitar ... (1960?: 22-23). 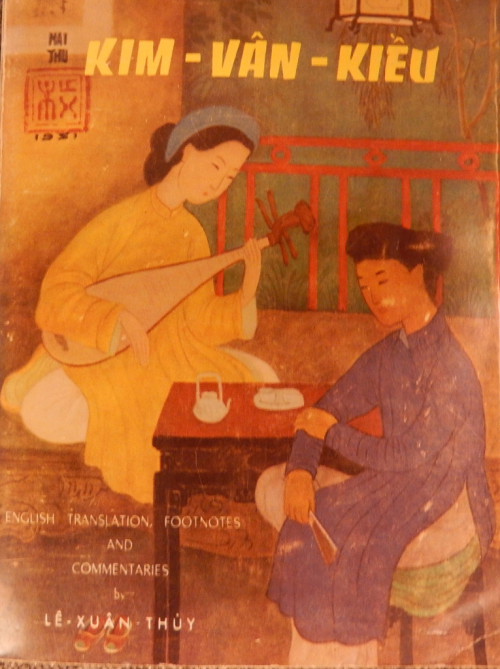 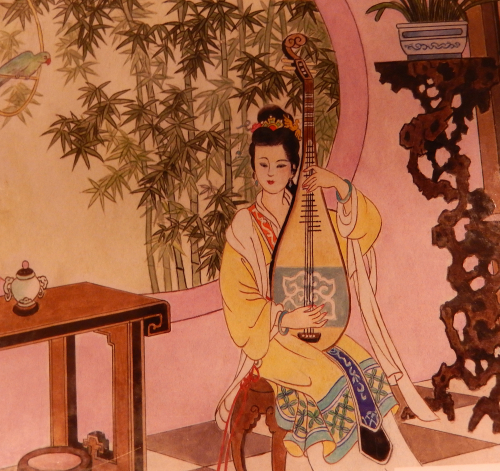 Kiều was born to a family of scholars and was a vision of idealised Confucian womanhood: beautiful, chaste, obedient and loyal to her family (Nathalie 2003: 14). A virtuous and graceful young woman, however her fate was doomed, and she had to sacrifice her love and life to save her father and her family. After a noble upbringing, she gradually fell into disgrace, being forced to work as a prostitute, not once but twice, and had four husbands. At one point she even stole valuables from her master to survive. After fifteen years of suffering, she was finally reunited with her first love, Kim Trọng. However, after all she had gone through she could not see herself as his wife, and therefore remained in a platonic relationship with him, and asked her younger sister, Thúy Văn, to marry him instead. 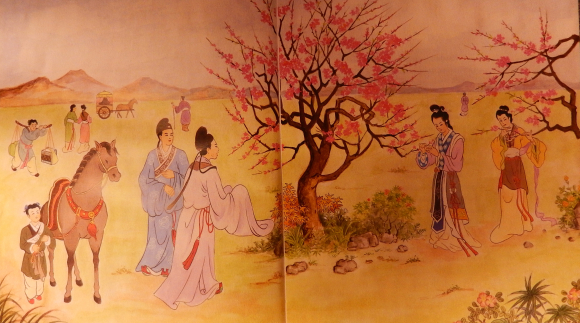 It is hard to imagine how this pure and talented young lady faced and coped with her subsequent downfall. In the following images, the manuscript artist depicts the lowest point in Kiều’s life, when she was sold by her first husband to a brothel. Tứ Bà, the madame and owner of the brothel cajoled Kiều into prostitution: ‘Listen to this my daughter, and keep this in mind: there are seven interior attitudes and eight intimate techniques to amuse people …until you can turn them upside down like stones…you must know how to charm them, sometimes by the tips of your lips, sometimes by the corner of your eyes, sometimes by reciting alluring poems, and occasionally by the flowers of your smile’ (Le Xuân Thủy, 1960?: 176-77). 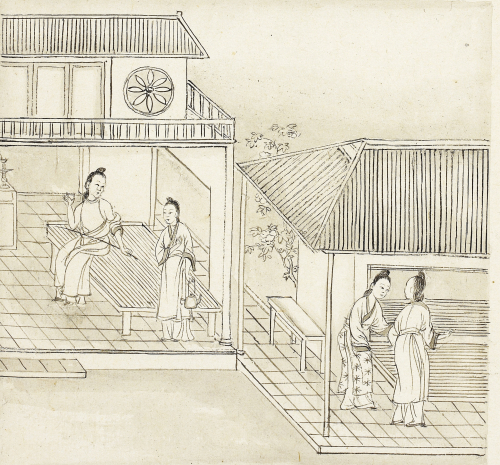 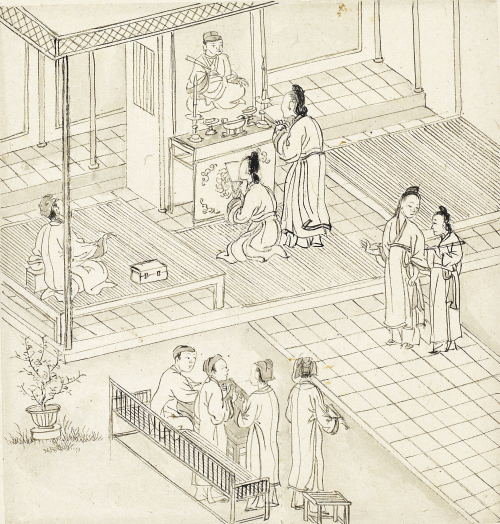 As Nathalie (2003: 13) points out, Kiều and this literary genre ‘stand out as a character of universal and enduring appeal, a vulnerable individual with whom those most acutely affected by change and misfortune can readily identify. For generations of Vietnamese who have experienced years of turmoil, changing regimes, colonisation, post-colonisation, war and exile, Kiều’s troubles strike a deep emotional chord.’ 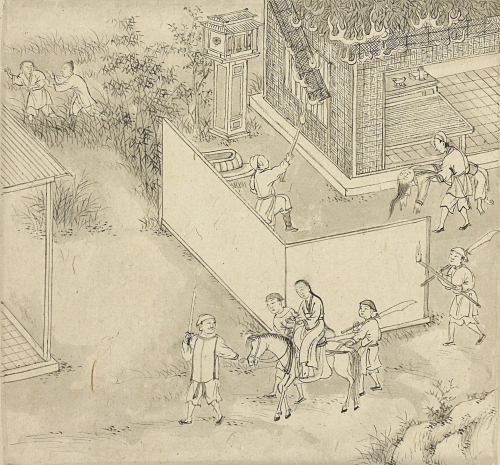 Kiều is kidnapped on the order of Hoạn Thư, the first wife of Kiều’s second husband. British Library, Or 14844, f. 38v 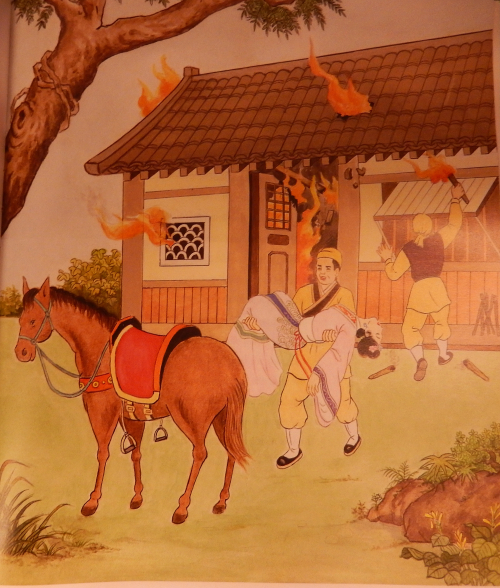 Reflecting its popularity, Kim Văn Kiều has been widely published in various forms, and in the British Library alone, there are over thirty books on this Vietnamese classic. Literary criticisms, different interpretations and translations of Kiều, both in Vietnamese and foreign languages, continue to be published; for instance, in 2004, Vladislav Zhukov translated the story into English with his own interpretations. His version complements well other widely recognised English translations, especially those by Lê Xuân Thủy in the early 1960s and by Huynh Sanh Thong in 1973.

Posted by Annabel Gallop at 2:43 AM