Since September I have been working on the Maltese collection at the British Library, where I am tasked with cataloguing Maltese publications. The library boasts an impressive range of material ranging from 16th century publications by the Knights of Malta to books published in 2017. Amongst these there are some of the earliest references to the Maltese language as in Jean Quintin’s historical and geographical survey of the islands Insulæ Melitæ descriptio (1536, BL 795.g.6.(1.)), contemporary accounts of the Great Siege of Malta from 1565, some of the earliest works on the Maltese language by Agius De Soldanis from 1750, and a complete collection of Mikiel Anton Vassalli’s works from 1791. 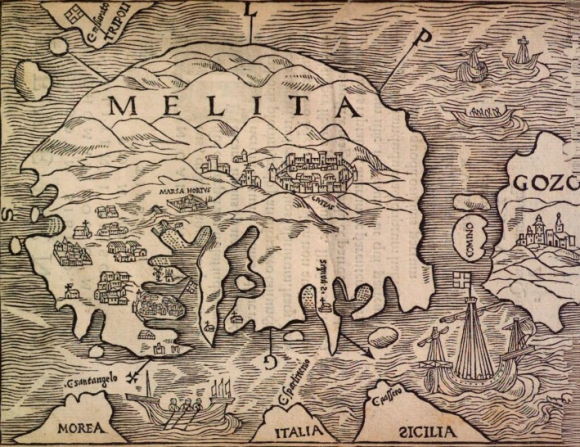 The turning point in the history of Maltese publications was the liberalisation of the press in 1839, which formally came into force in March of that year following a wider drive for political autonomy in the British colony throughout that decade. The earliest wave of independent newspapers to be published in Malta came on the heels of this development. These newspapers were a largely multilingual affair, with the vast majority being in Italian or English, bilingual Italian and English (Il Mediterraneo, BL NEWS8160 NPL), and even trilingual in Italian, English and French (Il Corriere Maltese, BL NEWS8160 NPL). However, a number of short lived journals in Maltese started popping up at the same time, with one issue of the English-language publication The Harlequin published on the 6th of December, 1838, under the title L’Arlecchin, jeu Kaulata Inglisa u Maltìa, (Cassola, 2011,p. 22), being entirely in the vernacular. One month later, on the 15th of January, 1839, the first issue of the first Maltese journal Il Kaulata Maltia was published followed by two other issues. Only one copy of the first issue was thought to have survived in a private collection in Malta, and a reproduction of its frontispiece was first published by Ġużè Cassar Pullicino (1964). The second and third issues have thus far eluded researchers for decades until I recently discovered a copy of the full three-issue set in the British Library newspaper collection (view Kaulata pdf here). 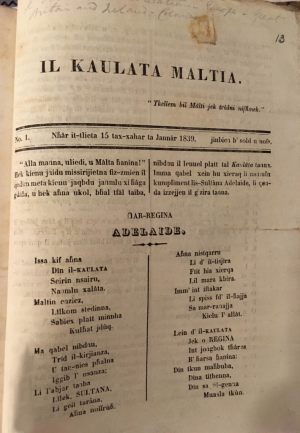 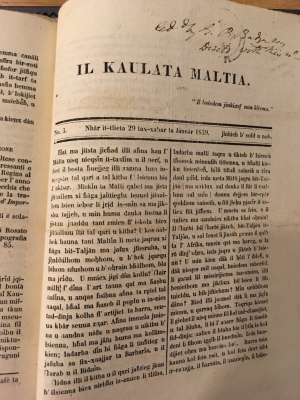 The editor of Il Kaulata Maltia was James Richardson[1], an Anglican missionary for the Church Missionary Society (CMS) who was also the editor of the aforementioned The Harlequin as well as The Phosphorous. The CMS was no stranger to publishing in Maltese in the years prior to the liberalisation of the press. In fact, the society’s own press, established by William Jowett in 1822, was one of the few allowed to operate before 1839 despite stringent press laws, and serviced other non-Catholic Christian denominations such as the Methodist Wesleyan Missionary Society. Its operations were nonetheless limited in the nature of the material which could be published, and were subject to the governor’s approval. The British government gave the green light to Anglican and other Protestant groups to operate and publish material in Malta yet pledged to protect the local Catholic population (Zammit, 2008, p. 258). This meant that no material of a religious nature intended for local circulation was allowed, and so output was limited to religious and educational material in Arabic, Turkish, Syriac, Italian and Greek and educational material in Maltese or about the Maltese language. Most notably, the CMS’s press was responsible for the publication of a number of works by Mikiel Anton Vassalli, known as “The father of the Maltese language”, including a revised edition of his Grammatica della Lingua Maltese (1827, BL 621.e.4), Motti, aforismi e proverbii Maltesi (1828, BL 14599.c.43), and Storja tas-Sultan Ciru (1831, BL 14599.b.58). All of these books fail to credit the CMS for their publication, instead using simply “Malta” or “Published by the author” despite their non-religious content, although this may have been done to avoid announcing Vassalli’s close ties with a Protestant group (Zammit, 2008, p. 259). In fact, Vassalli’s 1829 translation of the Gospels and Acts of the Apostles (BL 14599.ee.17) was also published by the CMS, albeit in R. Watts’ press in London, thus circumventing the ban on religious material. Of particular note are the Wesleyan Missionary Society’s Ktyb -yl-Qari Ghat-tfal (1831, BL 14599.c.3) and Ktyb yl Qari fuq bosta h̡uejjeg mah̡tura myn kotba Kattolici (1832, BL 621.a.9), both written by Cleardo Naudi which despite their religious content, were allowed to be printed as they were intended for exclusive use in its Malta Charity School. 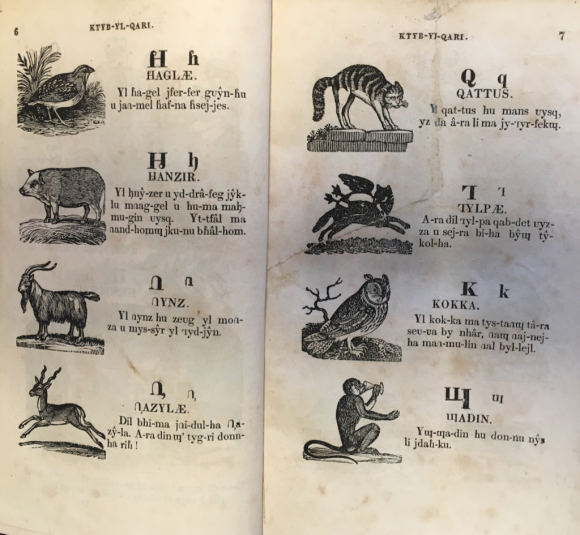 The CMS’s focus on nurturing the Maltese language was a well calculated effort. In an article in the 1831 issue of CMS’s The Missionary Register, which compares the inhabitants of Malta and Syria, the linguistic situation is described thus (vol. 19, p.317):

The Maltese, in general, are not a reading people, and their language can scarcely be said to be a written language: it is only a few years since it was reduced to writing; and nearly all the books which have ever, to my knowledge, been published in it have been published within a very short time, and mostly by Mr. Jowett, or at his press […] and perhaps not twenty persons can be found, among the native population of the whole island, who are able to read them.

This may have been seen as a hindrance to the missionary efforts of the CMS which consequently undertook a role in education. It is in this context that Il Kaulata Maltia should be seen. Rather than a newspaper, it was meant to be a compilation of opinion pieces by its author George Percy Badger, together with poetry, idioms and aphorisms. The 13th December, 1838 issue of The Harlequin included an advert for it, saying (reproduced in Cassola, 2011, p. 30. My translation):

There is no need to spell out the usefulness and prestige of such a publication, these are obvious matters to everyone. Who is to say that this paper might not one day be the first to establish the Maltese language on a level and solid foundation, and produce a literature that could fill the Mediterranean with its praiseworthy and glorious revelations?

The second and third issues of the journal had scathing attacks on the Maltese educational system, in particular with regard to language instruction, perhaps acting as a precursor to Badger’s own publication Sullo stato della educazione pubblica in Malta (“On the state of public education in Malta”) later that year.

The second issue tackled suggestions brought forward by the Royal Commission of 1836, in which the two commissioners sent to Malta, John Austin and George Cornewall-Lewis, reviewed the educational system of the islands. In their report they had suggested that all elementary school children should first learn Maltese, followed by Italian, which they deemed to be the de facto language of the educated, through the medium of the former. Consequently, English should be taught on the basis of the country being a British colony, followed by Arabic. Badger criticised the idea of teaching students four languages and rubbished the need to learn Italian except for those businessmen who required it for their trade. He declared pro-Italianism as the domain of irredentists and Carbonari wanting to secede from the British Empire, and suggested that the Maltese people as a whole wanted to be British and should thus be taught English. His article highlights the vehemently pro-British nature of the publication.

The third issue picked up the issue of linguistic education by turning the spotlight onto the Maltese language. Here Badger criticised those who had wilfully neglected the language by discouraging its use. This was no doubt an attack on the Knights of Malta who had ruled the country until 1798, and was by extension a thinly veiled attack on the Catholic Church. Despite a seemingly anti-Catholic stance, the very same issue included a poem dedicated to St. Publius by the Catholic priest Dr. Ludovico Mifsud Tommasi, who, in spite of his religious differences, showed an overlap with the CMS’s support for the freedom of religion and press, and was also a pioneering translator of religious texts into Maltese.

Il Kaulata Maltia also sheds some light on another aspect of the Maltese language that was topical at the time of its publication: orthography. As written Maltese was still in its infancy there were different opinions on how it should be written, particularly in terms of the sounds that have no equivalent letters in the standard Latin alphabet, such as the għajn and the rgħajn, equivalent to the Arabic ع and غ respectively. Some writers preferred to use the Arabic letters mixed in with the Latin alphabet, while others like Vassalli added specially designed characters to it, as can be seen from the image reproduced above from the spelling book by Cleardo Naudi. More radically, others proposed the exclusive use of the Arabic consonantal script, an example of which can be seen below. 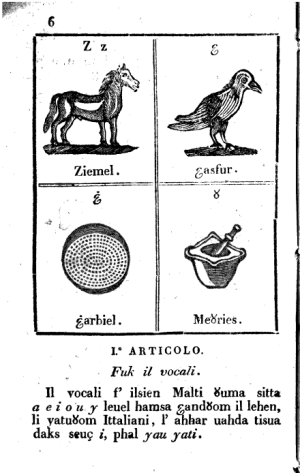 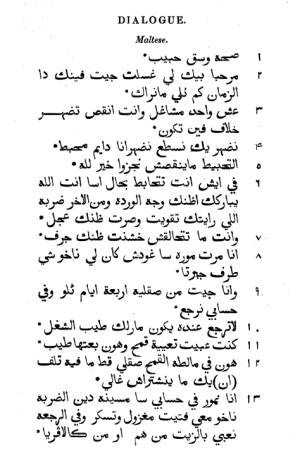 Left: An example of the Arabic ع , غ and ه mixed into the Latin alphabet from Francesco Vella’s Chtieb-ilkari yau dahla عal ilsien Malti (1824) (BL 14599.b.1)
Right: Excerpt of a dialogue in Maltese written in Arabic script from Rev. C. F. Schlienz’s Views on the improvement of the Maltese language and its use for the purposes of education and literature (1838) (BL 14599.c.4)

The CMS, however, opted for a modified version of Vassalli’s Latin orthography which became the basis of its Maltese publications, including Il Kaulata Maltia. In fact, it seems that the journal was intended to introduce the orthographic system to the general population, as the second page of the first issue lists the whole alphabet with a guide to its pronunciation and an explanation. Different opinons gave rise to some animosity between their respective proponents, and in this description the author taunted Rev. Giuseppe Zammit, known as Brighella, by jokingly requesting that he bless his orthography. Brighella published a response in the journal Bertoldu in January, 1839 in answer to that taunt (Cassola, 1994, pp. 59-60), and a reply to that was in turn published in the third issue.

I would like to thank Dr. William Zammit and Dr. Olvin Vella from the University of Malta for the help and information provided.

[1] The final pages of each of the three issues, as well as The Phosphorus, say that they were published for the editor of The Harlequin. For this reason, I regard Richardson as the official editor and Badger as the author.