An Introduction to the Peking Gazette at the British Library

Today’s post is by Emily Mokros, Assistant Professor of History at the University of Kentucky and Postdoctoral Fellow at the Center for Chinese Studies, University of California, Berkeley. She wishes to thank the China and Inner Asia Council of the Association for Asian Studies for funding a trip to the British Library in summer 2017. This post draws on research from her 2016 doctoral dissertation on the Peking Gazette and for her book on the same subject. In January 1808, the missionary Robert Morrison recorded some musings on news and politics in south China, where he had recently arrived under the auspices of the London Missionary Society. He wrote:

A court gazette from Pekin falls into the hands of some, & the loquacious Chinese, who spend much of their time in chatting parties, soon diffuse reports, and as is general, with considerable additions. I have called the Chinese loquacious, it is however only to be understood of them when by themselves. To foreigners they are reserved on every topic that regards the internal affairs of the Empire.
(Robert Morrison, Journal, January 1808, in CWM/LMS Collection, SOAS, University of London)

By early 1809, Morrison had begun to translate the court gazette (jingbao) for his new employers, the East India Company (EIC). Confined to posts in Macao and Canton, English traders yearned for access to Beijing, the nerve-center of the Qing dynasty, which ruled China from 1644 to 1911. The “Peking Gazette” promised a glimpse at the activities of the imperial court and bureaucracy. Soon, translations of the Peking Gazette by Morrison and his students became common in London newspapers and journals. Meanwhile, the EIC, the British Superintendency of Trade (established in 1842), and the Chinese Secretary’s Office (established in 1860) began to collect, transcribe, and translate the gazettes. European and American visitors to China sought out copies of the gazette as souvenirs of their encounters with the Qing state.

Originating from the intelligence missions of British diplomatic and trade representatives in China, the British Library now holds the most comprehensive collection of nineteenth-century Chinese gazettes in the world. The collection is almost continuous between 1820 and 1910, and contains both manuscript and print editions for many periods. In total this amounts to about a million pages, documenting events like the Opium Wars, the Taiping Rebellion, and subsequent efforts to modernize and rescue the ailing dynasty. At that time, most Chinese archives, libraries, and scholars saw gazettes as cheap daily publications, and not suited for long-term collection. As a result, the British Library collection is singular in scope.

Government gazettes are valuable sources for historians who want to understand state communications, and the exchange of official information between the central state, its officials, and the public. By reading the Peking Gazette, we can better understand what people in nineteenth-century China knew about the Qing state and its operations. Gazettes contained details of wars, disaster relief campaigns, criminal cases, and everyday personnel transfers. They were both distributed to imperial officials, and sold on the streets and by subscription. Gazettes reveal what types of information the state made available to readers throughout the empire, and how quickly this information could travel. Finally, they are important exemplars of the print and textual methods employed in early modern China.

Chinese gazettes offer exciting transnational comparisons to both other official counterparts and to commercial newspapers emerging around the globe at the same time. Beginning in the mid-seventeenth century, the English government published a daily gazette called the London Gazette. By the nineteenth century, the London Gazette contained advertisements, and was subject to a press tax. Like the Chinese gazette, this paper excerpted from official documents. In comparison with the London Gazette, the Peking Gazette included relatively candid representations of state operations, because it published critical internal reports about the misbehavior of serving officials and the salacious details of criminal cases.

Like newspapers, gazettes provide insights into everyday life and social conditions. However, gazette writers did not act as editors. They did not include their own opinions, solicit letters, or publish commercial information. The Qing government regulated the contents , and punished accidental or intentional variations. Although the state controlled gazettes, it did so in order to maintain the document’s authority, rather than to eliminate unfavorable representations of court and officials as we might expect.

In addition, the margins of the Peking Gazette collection reveal hidden dimensions of historical Sino-British interactions. Many gazettes in the British Library collection were annotated by readers: names were marked, Western dates were added, and pencil summaries in English were included. 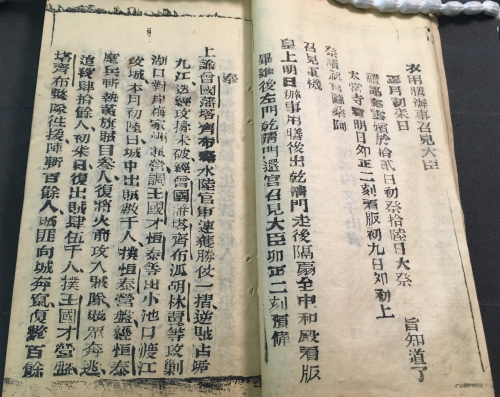 We also see  evidence of the idle moments of the Chinese clerks who worked through gazettes, including whimsical sketches and calligraphy practice on unused pages. 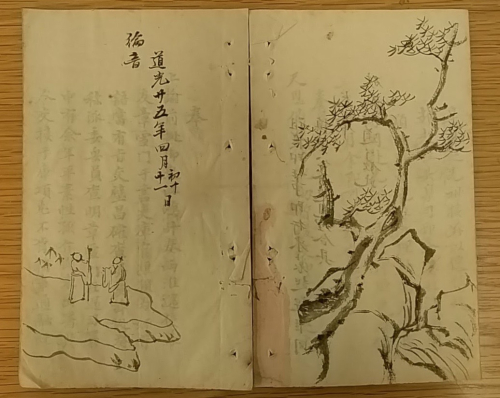 British diplomats also compiled translated summaries of the Chinese gazette. The archives of the Chinese Secretary’s Office, held at the National Archives at Kew, reveal this process in action (see in particular FO 233 and FO 1080).

The diary of Sir Chaloner Alabaster (1838-1898), held at the University of London, details his experience as a student interpreter in China. British student interpreters worked through translations each day as part of their language training. One day in 1856, eighteen-year-old Alabaster wrote in his diary:

…we worked away but did not do much today the teachers being remarkable stupid at 12 1/2 down to office & when there wasted my time nicely reading extracts from the Peking Gazette however as it was by Wades [Thomas Francis Wade, Chinese Secretary] order it was alright.
(Diary of Sir Chaloner Alabaster, 1856, n.p, MS 380451, SOAS, University of London)

Today, as in Alabaster’s day, it is possible to waste your time quite nicely reading the Peking Gazette collection at the British Library. It is a fascinating glimpse into the daily reading of individuals across nineteenth-century China, from emperor to interpreter.

Further reading
For a study of the place of the Peking Gazette in the late Qing newspaper Shenbao, see:
Barbara Mittler, A Newspaper for China? Power, Identity, and Change in Shanghai’s News Media (1872-1912) (Cambridge, MA: Harvard University Press, 2004), Chapter 3.

On the history of news in Europe before the modern newspaper, see:
Andrew Pettegree, The Invention of News: How the World Came to Know About Itself (New Haven: Yale University Press, 2014).

Emily Mokros, Assistant Professor of History at the University of Kentucky and Postdoctoral Fellow at the Center for Chinese Studies, University of California, Berkeley