At the centre of a Thai royal funeral are processions of the royal urn to a specially built and lavishly decorated crematorium that represents Mount Meru in Buddhist cosmology. However, there are numerous additional rites and ceremonies around funerals in Thailand that are deeply rooted in Thai history, traditions and Buddhist culture. They have been the subject not only of various scholarly research works, but also feature in accounts of early travellers and explorers to Thailand and are well documented in the form of Thai cremation volumes and commemoration books. 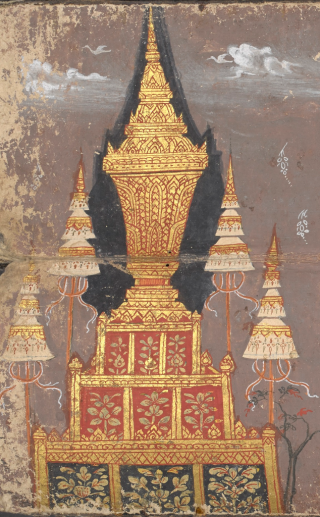 A lavishly gilded funeral casket with triple-tiered umbrellas on a high pedestal. Illustration in a 19th century Thai funeral book from central Thailand containing a selection of Buddhist texts and the legend of Phra Malai. British Library, Or.15258, f. 93

In the Thai Buddhist tradition, a dying person was treated with respect, dignity and great compassion. Relatives and friends encouraged the dying person to concentrate on Buddha and his teachings, to recall the positive aspects and good deeds of their life, and if possible to repeat the names of previous Buddhas. The aim was to help them to be free from disturbing emotions like fear, anger or sorrow. Most of these traditions are still followed up till today, but some have changed over time. 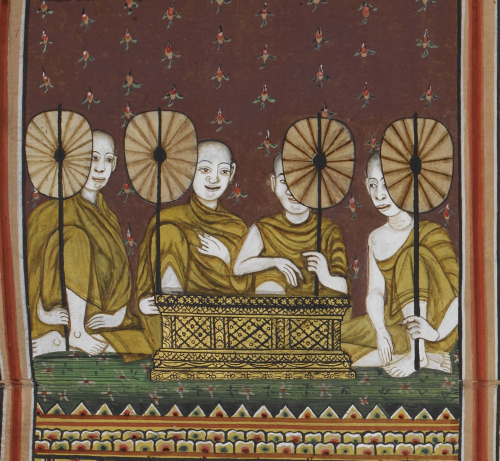 Illustration of four monks with fans and a gilded manuscript box preparing to chant at a wake. From a central Thai folding book, 19th century. British Library, Or.14117, f. 7

Once the person had passed away the body was cleaned and covered with a funeral cloth called pamsukula. A bathing rite, in which relatives poured scented water over the right hand, took place before the hands were put together in front of the chest and long white strings were tied around the wrists and ankles of the deceased. The ends of the strings were held by four monks who chanted a selection of Buddhist texts or delivered sermons. Occasionally, the monks could recite and perform the legendary story of the monk Phra Malai during a wake at the family home of the deceased. 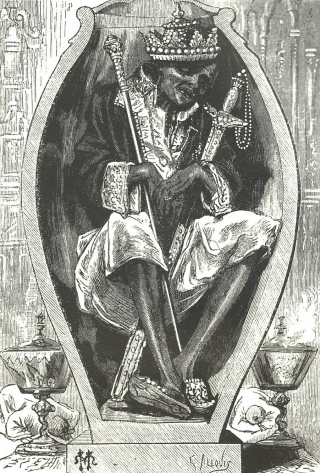 An impression of the physical remains of the Second King (Uparaja) Phra Pinklao, who passed away in 1866, during the period of lying-in-state in the funeral casket. Engraving by E. Allouis, reprinted in Yumangmi 2016, p. 37. British Library [shelfmark pending]

The fully dressed body of a deceased person in a high-ranking position was usually put in a seated position in an urn-shaped casket made from sandalwood. The urn could be heavily decorated, depending on the social status of the person who had passed away and their family. The casket was then placed on a pedestal to which multi-tiered umbrellas and an altar for flower and incense offerings could be added. The period of mourning could last from one week to one year, the latter being often the case with kings. 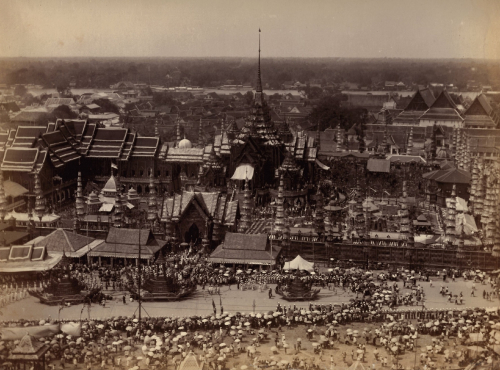 Procession of the funeral caskets of two princes to the cremation site near Wat Mahathat in Bangkok during the reign of King Chulalongkorn (r.1868-1910). Photograph from the collection of Lord Curzon, Viceroy of India (r.1899-1905). British Library, MSS EUR F111/88

The period of mourning and lying-in-state was used to erect a temporary structure, often in the shape of a large pagoda-like pavilion representing Mount Meru, at the site where the body would finally be cremated. During this time, friends, distant relatives and neighbours - or even the entire community in which the deceased lived - visited to pay their respects to the deceased person and to cheer up the grieving family members. One or more monks could perform or lead morbid meditations in order to reflect on their own mortality and the universal law that everything is subject to change and decay, but also to transfer merit to the deceased so that they may be reborn in a fortunate future existence where they could meet the future Buddha Metteyya. 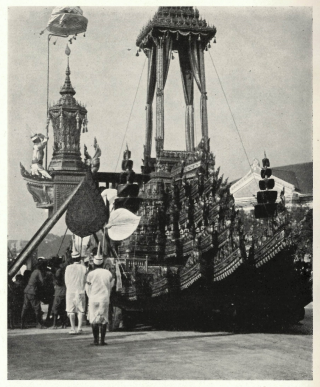 Funeral carriage in the shape of Mount Meru. A Brahmin leads the transfer of the funeral casket from the site of the lying-in-state to the crematorium. Photograph published in Döhring 1923, vol. 1, p.80. British Library, J/10152.tt.26

Another important activity that took place during the period of mourning was the production of cremation or commemoration books, often commissioned by family members in order to make merit on behalf of the deceased. Daily rites were carried out for a certain number of days, usually 100 days for a king. Preparations for the event of the cremation were made during this time as well. Like in the case of members of the royal family or senior leaders of the Buddhist Order, a large procession of the funeral casket and triple circumambulation of the cremation site was organised. For the royal procession, the casket with the body was placed on a large lavishly decorated carriage in the shape of Mount Meru. Following Thai-Hindu traditions, a royal procession had to be led by several Brahmins, dressed entirely in white clothes with white pointy head-gear, who were ritual and ceremonial advisers at the royal court. 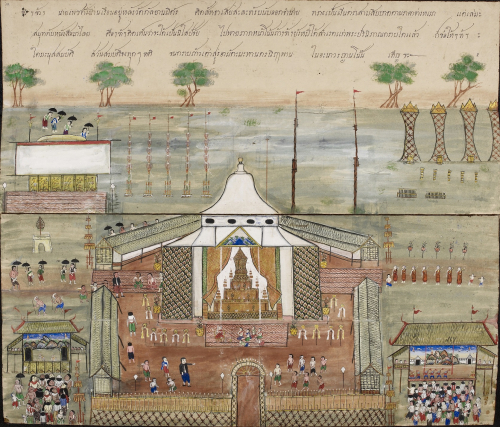 Illustration in a Thai folding book showing a cremation site with the funeral casket in a pavilion in the centre. A monk reads from palm leaves to a gathering of people in front of the crematorium, while others watch puppet theatre performances. In the background there is a stage for a shadow theatre and structures for the launching of fireworks in the night. A colophon at the top states that the production of the manuscript cost thirty Baht. Central Thailand, 1894. British Library, Or.16100, f. 49

The cremation itself would often be attended by a large crowd of mourners and visitors from near and far, and this was an ideal opportunity for everyone to make merit by giving offerings, listening to Buddhist sermons or by watching performances of the Vessantara Jataka, Buddha’s last Birth Tale. The cremation of royals, senior members of the Buddhist Order or important members of the community could be combined with certain entertainments like puppet and shadow theatre, dance drama, acrobatic and music performances. In stalls around the cremation site food was provided for visitors, and often also flowers, especially lotus blossoms, incense sticks and scented bees wax candles for offering and merit-making purposes.

The sacred space of the cremation site was usually marked by poles decorated with multi-tiered umbrellas or flags and flowers. The highest number of umbrellas on a single pole could be nine, this being the most sacred royal regalia, indicating that the cremation of a king or a member of the royal family was taking place. Tower-like structures were often erected around the crematorium to launch magnificent fireworks which concluded the event of the cremation once night had fallen. 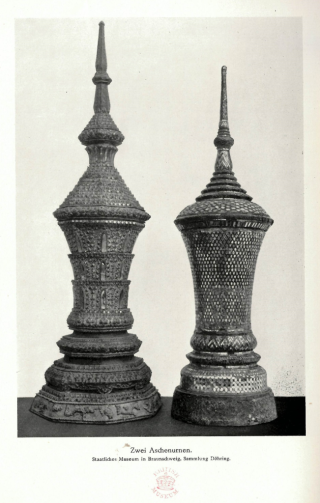 Photograph of two stupa-shaped wooden urns with lavish lacquer, gold and mirror-glass-inlay decorations in which the ashes were transferred to their final resting place. Photograph published in: Döhring 1923, vol. 2, p.36. British Library, J/10152.tt.26

After the cremation, the ashes and remaining bones of the deceased person were placed in wooden urns in the shape of a stupa. These could be heavily decorated with gold leaf, mirror-glass inlay or mother-of-pearl inlay. The ashes were then transferred in another procession to a site where a memorial service could take place before it was finally enshrined in a stupa-like monument. This would normally be the final and permanent resting place of the physical remains of a deceased person.

Illustration of a stupa or dhatu chetiya showing its main elements – a plinth with a multi-level square base representing the Three Worlds (Traiphum), the bell-shaped relic chamber, the spire base and spire representing the heavens, and the top of the spire in lotus-bud shape representing nibbana (Nirvana). From a central Thai divination manual, or Phrommachat, in folding book format, 19th century. British Library, Or.13650, f. 25

In the Buddhist tradition, stupas or dhatu cetiyas were originally designed to house the relics of monks or nuns. Gotama Buddha’s relics are said to have been enshrined in such structures in various places, like for example at the Temple of the Sacred Tooth Relic (Sri Dalada Malagawa) at Kandy, Sri Lanka. In the Thai Buddhist tradition, smaller stupa-like monuments called thāt (from dhatu chetiya) became commonly accepted as structures to house the ashes of deceased lay Buddhists as well. They were built as permanent structures, usually with bricks, and then decorated with plaster and sometimes with elaborate gold or mirror-glass decorations, especially those housing the relics of royals. 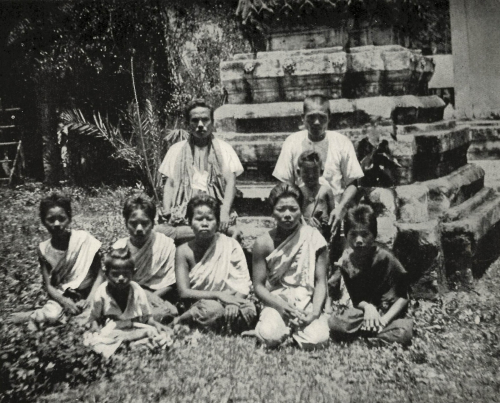 A small commemoration gathering in front of the thāt housing the ashes of a deceased person, perhaps a former family member, many years after the cremation as one can tell from the weathering of the monument. Photograph published in: Döhring 1923, vol. 1, p.95. British Library, J/10152.tt.26

Stupa-like monuments housing the ashes of deceased people are not places for worship, but for remembering and paying respect to the deceased and for reflection and meditation about life, death and rebirth. Recurring ceremonies and commemoration services could be held at the thāt or at the monastery where it was situated. Such events also served as occasions to make merit on behalf of the deceased person and to support the Buddhist Order, Sangha. Often people attending such commemoration services would take five or eight precepts and dress in white clothes. White was traditionally the choice of colour for mourners. 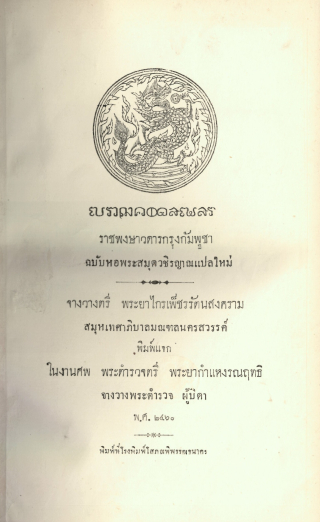 Title page of a Thai cremation volume published in 1917 on occasion of the funeral of Phraya Kamhaeng Ronnarit, sponsored by the deceased’s son Phraya Kraiphet Rattanasongkhram. The book contains the Chronicle of the Kingdom of Cambodia, held at the Vajiranana Library in manuscript form, translated into modern Thai and with a foreword by Prince Damrong Ratchanuphap. British Library, Siam.70

Prior to the 20th century it was a widespread practice to commission a handwritten cremation or commemoration volume in folding book format containing a selection of Buddhist texts in Pali language, often extracts from the seven books of the Abhidhamma, which were sometimes combined with the Thai version of Phra Malai. A colophon would often include information on the occasion, the sponsor of the manuscript and for which purpose it was produced. In the first decades of the 20th century, however, a printing culture of cremation and commemoration volumes evolved which by the 1930s had completely replaced the production of handwritten funeral books. Due to the fact that the printed volumes could be distributed to large numbers of people attending the cremation and commemoration services, the contents of these books became much more varied and ranged from art, music, literature, history, archaeology, linguistics and poetry, to Thai traditions and customs, ranks and titles of the nobility, writings and travels of kings etc. The Vajiranana Library, Sophon Printers and Thai Printers were the forerunners in the production of such cremation volumes. The texts contained in the books were often transcriptions from older palm-leaf manuscripts or handwritten folding books held in the collections of the Vajiranana Library, in private collections of royals and in various monastery libraries.

Posted by Annabel Gallop at 2:39 AM