Today's post is from guest contributor and regular visitor to Asian and African Collections, Sunil Sharma, Professor of Persianate and Comparative Literature at Boston University.

The seventeenth century witnessed a flowering of literature in Dakhni, a language that was essentially old Urdu and used in the entire Deccan peninsula, especially for the genre of the narrative verse romance (masnavi). The chief centres for the literary florescence were the courts of the Adilshahis in Bijapur and the Qutbshahis in Golconda. Royal patrons at these courts sought to elevate the status of the vernacular Dakhni to that of the more prestigious lingua franca Persian. Continuing an older tradition that began in the north, poets recast tales from the Indic tradition by adding various Persianate elements, even as they produced retellings of classical Persian stories with Indic features. A canonical work in this literary production was the Phulban (Flower garden), a verse romance composed in 1656 by the court poet Muhammad Mazharuddin Ibn Nishati, which was dedicated to the generous patron, the Qutbshahi king ʻAbdullah (r. 1626-72). We know next to nothing about the poet other than the meagre tidbits of information that he provides in the poem. 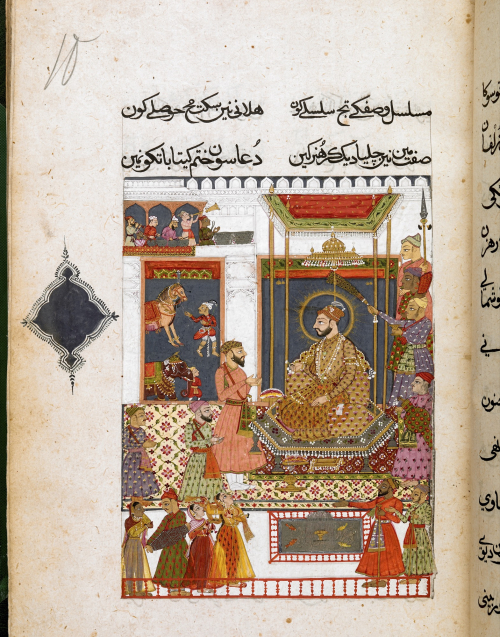 The British Library manuscript IO Islamic 14 is an illustrated copy of the Phulban.[1] The text is written in Persian naskh, accompanied by 43 paintings, some on double pages. Although undated, it is likely that this manuscript dates from the mid-eighteenth century since it has several codicological similarities to another Dakhni verse romance, the more sumptuous Gulshan-i ‘ishq (Rose garden of love) in the Philadelphia Museum of Art (1945-65-22).[2] Both manuscripts have their provenance in the library of Tipu Sultan. The fascinating history of the travels of this collection is described in an earlier blog: Revisiting the provenance of the Sindbadnamah. The BL Phulban was apparently not completed since there are blank spaces for section headings and also some additional paintings. 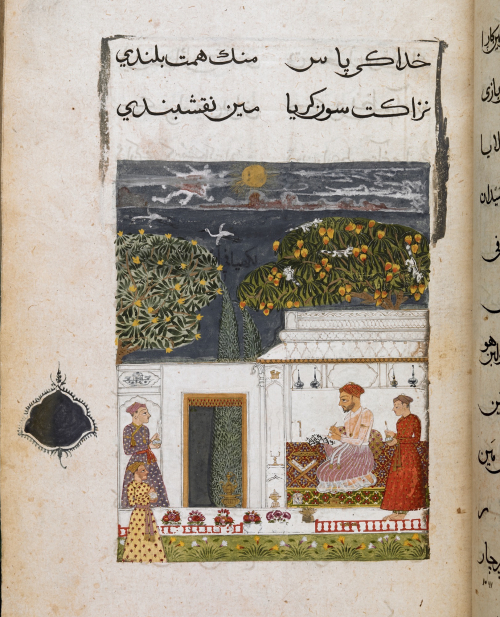 The poet, Ibn Nishati seated in a walled garden writing his poem. The line that the poet is writing in the book corresponds to the first of two in the text block above the image. Outside the walled enclosure is an Indo-Persian garden with both cypress and mango trees, flying birds, and strange-looking squirrels (BL IO Islamic 14, f.13r)

The Phulban comprises almost 2000 couplets and is a racy mix of romantic escapades and fantastic adventures involving Chinese merchants, kings of Kashmir, Sindh, Egypt, and Ajam, princes, princesses and fairies, mendicant figures such as a dervish and yogis, a talking parrot. The opening narrative involves a story told by a dervish to the king of the fabled city of Kanchanpur (City of gold). 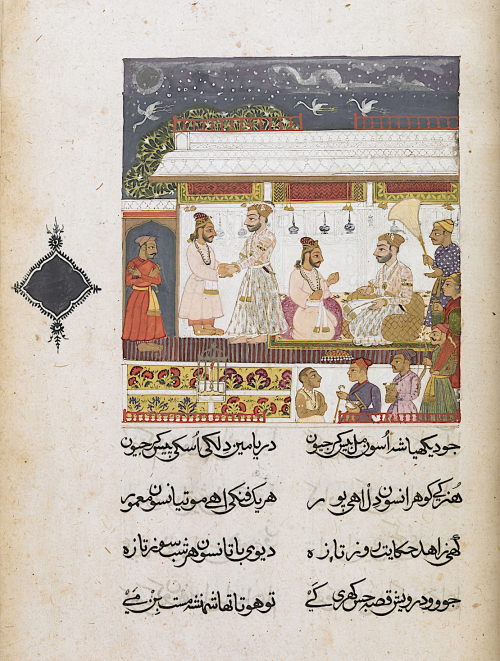 A dervish and the king of the fabled city of Kanchanpur (BL IO Islamic 14, f.20r)

But this is not the frame story of the Phulban. Rather the whole work is a loose collection of tales, as one story leads to another. Ibn Nishati claimed in the prefatory part of the poem that his work originates in a Persian work named Basatin that is a mirror of love (basatin jo hikayat farsi hai / muhabbat dekhne ki arsi hai), exhorting himself to “translate” it into the more accessible Dakhni.[4] This Persian Basatin has generally been considered as a reference to a lost work, but it is most likely the fifteenth-century Indo-Persian prose romance, Basatin al-uns (Garden of companionship) written by Muhammad ibn Sadr Taj ‘Abdusi Akhsitan Dihlavi, a work that had a moderate degree of readership in the early modern period.[4] Some changes in place names were made in the Dakhni version, such as the city of Ujjain becomes Kanchanpur. Ibn Nishati’s work is considerably shorter than the Persian one, which is in mixed prose and verse.

The story of the king who learns the secret of making his soul enter another creature’s body has its origins in Sanskrit literature, especially connected with King Vikramaditya of Ujjain. In the Dakhni version, the king’s evil vizier learns the secret mantra and takes over the king’s body and life. It is the king’s faithful wife who helps him kill the villain and re-enter his own body. 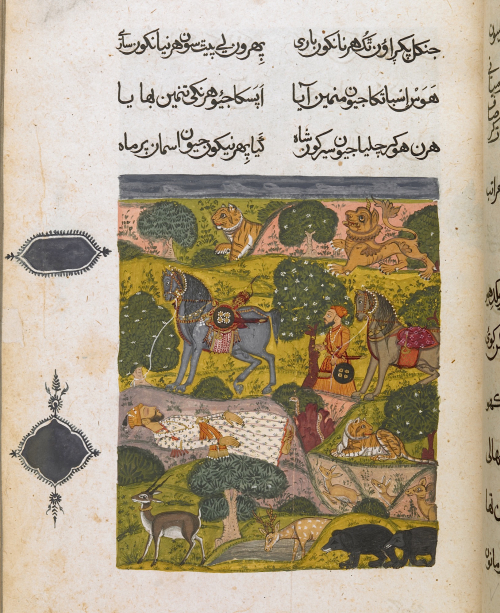 The longest story in the second half of the text is a romance with a somewhat convoluted plot that involves the love, separation, and reunion of the Egyptian prince Humayun-fal and the princess of Ajam, Samanbar. Although they elope and live in hiding, the king of India falls in love with her as she is drying her hair at a palace window. 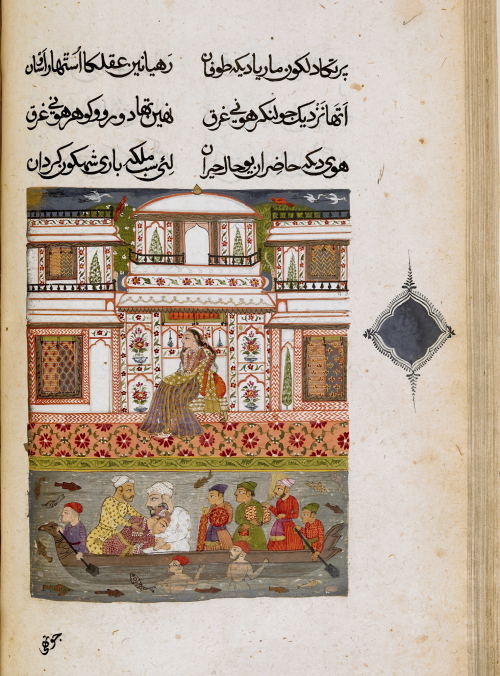 In order to steal her from his rival, the king conspires to have Humayun drowned, but the distraught Samanbar spurns him. To avenge his son’s death, Humayun’s father comes with his Egyptian army and in an epic interlude defeats the Indian king. It is then discovered that Humayun did not die after all and is being held captive by fairies. Overjoyed by the news, Samanbar becomes a jogan and sets off to find him. 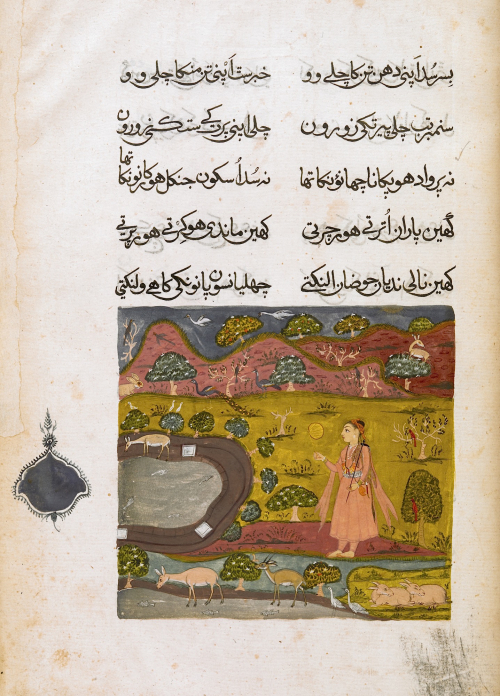 She arrives at a stunning palace whose walls are adorned with inscriptions of the feasts of the Qutbshahs, the battles of the Turkmen, and pictures of legendary Persianate lovers such as Shirin-Farhad, Vamiq-Azra, and Layla-Majnun. The fairy princess Mulkara discovers her there and helps the lovers reunite. A third of the total paintings in the manuscript are devoted to ethnographic scenes depicting the wedding celebrations of Humayun and Samanbar. 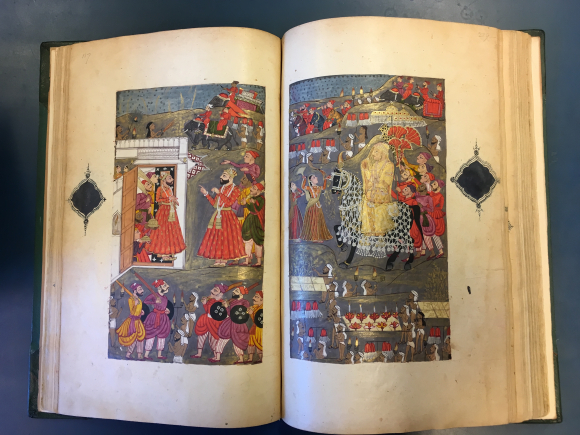 The numerous manuscripts of Phulban attest to the work’s popularity and importance in the Urdu literary culture of an earlier age. As with most Dakhni literary works, this one too has never been translated. As Ibn Nishati described the discerning reader in the concluding section of his work: “He who understands figures of speech is knowledgeable and will appreciate my verbal skills” (jo ku’i san‘at samajta hai so gyani / vahi samje meri yo nukta-dani).

[1] See J.F. Blumhardt, Catalogue of the Hindustani Manuscripts in the Library of the India Office (London, 1926), pp. 55-56.
[2] For a discussion of this manuscript see N.N. Haidar, "Gulshan-i ʻishq: Sufi romance of the Deccan", in L. Parodi (ed.), The Visual World of Muslim India (London, 2014), pp. 295-318.
[3] Phulban, ed. ‘Abdul Qadir Sarvari (Hyderabad, 1938), p. 22. The introduction is useful for the facts known about Ibn Nishati and also a summary of the story in modern Urdu.
[4] This Persian text was published as Basatin al-uns, ed. Nazir Ahmad (New Delhi: Centre for Persian Research, Office of the Cultural Counsellor, Embassy of Islamic Republic of Iran, 2010).