A papyrus puzzle: an unidentified fragment from 4th century Oxyrhynchus

The Hebrew Manuscripts Digitisation Project team has just started working on five papyrus fragments, which are some of the earliest Hebrew texts we have at the British Library. The fragments are a fascinating mystery, one that we hope you can help us solve.

In 1922, the almost 70-year old Egyptologist Flinders Petrie discovered some papyrus fragments written in Hebrew script during an excavation in Oxyrhynchus, Egypt. These fragments were acquired by the British Museum that year, and are now held in the Oriental Collection of the British Library under the shelfmarks Or 9180A, B, C, D, and E. 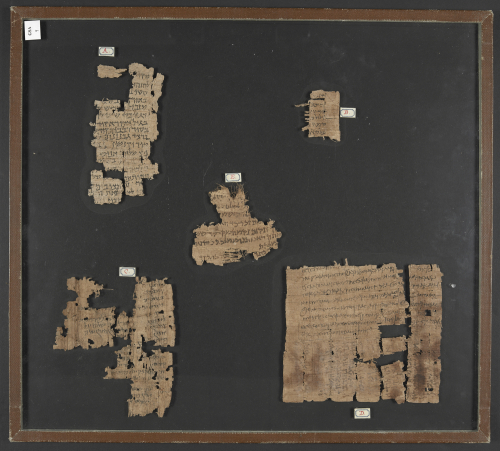 As you can see here, the papyrus fragments are housed all together in one glass frame. Papyrus documents have been traditionally housed in glass since the late 19th century, when people first started to think about how to study them without handling them directly. It is still considered the most suitable storage method for papyri as glass is inert - papyrus requires a highly stable chemical environment due to its high salt content. Static is also problematic as papyrus is very fibrous, and the rigid nature of glass frames means that they can be handled without disrupting the material. The imaging team at the British Library were able to produce incredibly high quality images of the fragments through the glass, which has enabled us to research them fully without risking damaging them.

We are not able to precisely date these fragments, but the current consensus is that they are from the fourth century CE. Three of them (A, B and E) are poems, all written in Hebrew language and script. Fragment D is a Greek contract, with Hebrew text in the margins, which is probably also of a legal nature. Fragment C is written in Hebrew characters however the language – except the last three lines –is yet unidentified. This is where our mystery lies – and perhaps it is about to be uncovered by one of you. 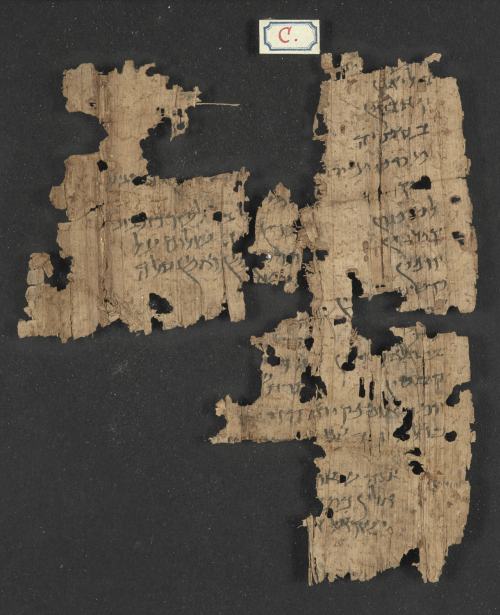 As you can see here fragment C actually contains two pieces: a small piece on the left and a larger one on the right. Photographs of the Or 9180 fragments have been published in various articles over the years, in 1923, 1971 and 1985, and we have been able to use these to ascertain that the position of the two pieces of C have changed over time. In all of these publications, the smaller piece was attached to the lower left side of the larger piece. Today however, the smaller piece is situated at the upper left side of the larger one. 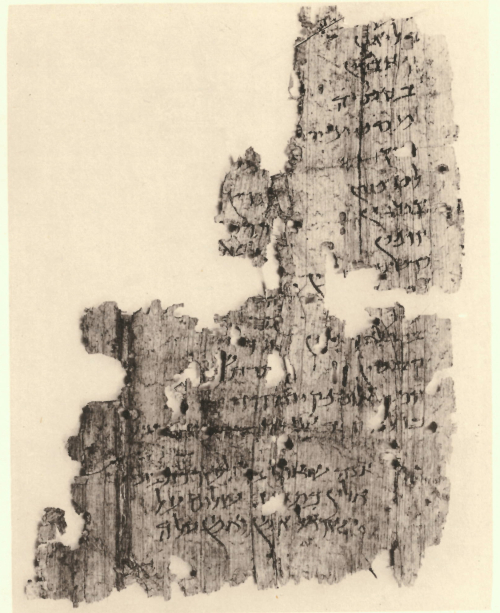 If you have a closer look at the arrangement above,  you can see the matching strands of the fibres within the papyrus, and that the three lines of text on the smaller fragment are perfect continuation of the last three lines of text in the larger piece. This shows that the earlier arrangement of the fragment was correct, and that what might have happened is that the left part of the fragment had broken off from the larger piece when the fragment was rehoused at some point after 1985. Thanks to the digitisation project, we were able to prove this theory by virtually reconstructing fragment C without risking damaging the original fragment.

Virtual reconstruction of the original arrangement of the fragment

In its reconstructed form, the last three lines of the papyrus, first deciphered by Hartwig Hirschfeld in 1923, become once again legible:

The so-called colophon - the last three lines of Or 9180C

These lines were written in Aramaic and have been identified as a colophon[1]:

I, Saul son of [E]leazar have written these wri[tings]. Peace be upon Israel. Amen and amen, selah 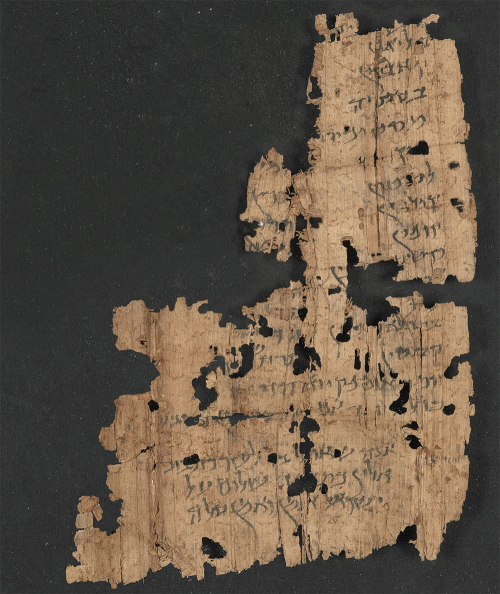 The reconstructed arrangement of Or 9180C

The 14 lines above the colophon are a real mystery though, both in terms of language as well as content. It seems that this fragment was originally a list of words in two columns, but now only the right column has remained more or less intact, with just small traces of the left column visible. For us, the real challenge is to identify the content of this fragment. Over the years various suggestions have been made, such as: a kind of Latin and Greek vocabulary; a list of gnostic charms; magical incantations; an inventory of articles; and a list of Latin names.[2]

Although Fragment C contains Hebrew characters, unlike the other fragments in Or 9180, the language is not easily identifiable. It was not uncommon for Jews to use Hebrew script when writing in a language other than Hebrew. Among the most widely used are Judeo-languages are Judeo-Arabic, Yiddish and Ladino (Judeo-Spanish). Ancient Jewish Greek literature however was almost always written in Greek script.

Our initial approach to deciphering this fragment was by looking into what languages the Jews of Egypt spoke in the Late Antique period:

We can see here in this quote from the Palestinian Talmud, compiled in the 4th century CE, that the Jews of the period were multilingual. Evidence shows that the Jewish population would have been exposed to Hebrew, Aramaic, and Greek, although they may not have been equally fluent in all of them. Greek became one of the main languages if not the main language of Egyptian Jewish communities of the time. They used the Greek translation of the Pentateuch, the Septuagint, which was mostly compiled by Alexandrian Jewish scholars in the 3rd century BCE -2nd century CE.

The language of this fragment was discussed further at a workshop organized by Platinum (specialists researching Latin papyrus fragments) at the University of Naples Federico II in May 2017. The participants there concluded that the language could not be straightforwardly identified as Aramaic, Greek or Latin. There were some reservations though. Rabbinic literature of the Hellenistic period is rich in Latin and Greek loanwords, but they are often very different from their original forms. For example: a word may not have simply been transliterated, but would have gone through some phonetic and accentual changes. They can preserve lower register (colloquial or slang) words of spoken Greek or Latin that are unattested in literary sources, and were not recorded in dictionaries. Consequently, the fragment we are dealing with could contain such low register Greek or Latin words written in Hebrew script. On the same basis, it could also have been written, perhaps, in a local Aramaic dialect. A further possibility, which as far as we know has not yet been looked into is that the text of the fragment could be the local Egyptian language (Coptic) in Hebrew script.

As well as the mystery of the language, another question to consider is why this text would have a colophon with a blessing at the end? It would seem unnecessary at the end of a list of articles, or a list of names. This might be more plausible if the text was of a magical or mystical nature.

Such a small fragment and so many questions. Our aim with this blog post is to draw attention to this fascinating and mysterious text. Perhaps one of you can solve the puzzle? If you think you have a solution, or further questions, please get in touch with us on Twitter @BL_HebrewMSS. We look forward to hearing from you!

[1] Colophon is a kind of inscription recording information relating to the circumstances of the production of a manuscript, which were usually placed at the end of a work.
[2] For studies discussing this fragment, see ‘Publications’ in the full catalogue record.