The evolution of the Malay title page

My previous blog presented the exhibition Tales of the Malay World, now in its final month at the National Library of Singapore (18 August 2017 - 25 February 2018); today I examine two Malay manuscripts from the British Library currently on display in Singapore, Hikayat Parang Puting and Hikayat Perintah Negeri Benggala.

Hikayat Parang Puting, 'The tale of the (magic) sword', is a Malay fantastical adventure tale about a young hero, Budak Miskin, the ‘Poor Boy’, who goes through many trials to win the hand of the fairy princess. Accompanied by his magical pets - a snake, an eagle and a rat - and with the help of a sword that can cut by itself (the eponymous 'Parang Puting', parang meaning sword, and puting referring to the top part of a blade embedded in the hilt), Budak Miskin battles dragon-serpents (naga) as well as an army of 99 rival suitors before he can settle down to rule his kingdom with his hard-won wife Puteri Mengindera Sehari Bulan.

The British Library manuscript (MSS Malay D.3) appears to be the oldest of the several manuscripts known of this tale. According to the colophon it was copied in Penang for Thomas Stamford Raffles by his chief scribe Ibrahim, and was completed on 29 Syawal 1220 (20 January 1806). Ibrahim, who was born in Kedah in 1780, was the younger son of Hakim Long Fakir Kandu, a prominent merchant from the south Indian Chulia community. Ibrahim and his older brother Ahmad both worked in Penang as scribes for British employers – Ahmad for the merchant Robert Scott, while Ibrahim was employed by Raffles. Raffles must have given this copy to his close friend John Leyden, and following Leyden’s early death in Java in 1811 the manuscript was acquired by the East India Company, and is now held in the British Library. 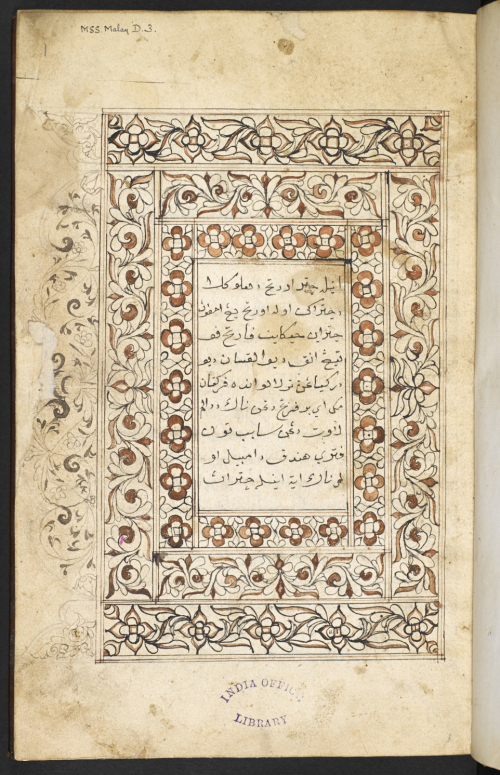 The first page of the book is decorated with attractive triple ornamental borders, filled with floral and foliate motifs picked out in orange-brown and black ink, but it is puzzling to find a single ornamental frame on a left-hand page of a Malay manuscript book. A fundamental principle of Islamic book culture, common to all manuscripts written in forms of the Arabic script, is the centrality of the aesthetic concept of the ‘double-page spread’. Unlike books and manuscripts written in Roman script, where the first page in invariably a right-hand page and the text thence continues overleaf, in Islamic manuscripts the text almost always starts at the top of a right-hand page, and continues onto the facing left-hand page. The most common decorative adornment to an Islamic manuscript is therefore a set of double decorated frames composed across two facing pages, symmetrical about the gutter of the book, and with the illumination concentrated on the three outer sides of each page. In some cultures there is a preference for double headpieces: illuminated frames across two facing pages, but with the decoration concentrated above the text on each page. In simpler books it is also common to find ornamental frames on one page only, in the form of a single headpiece, but almost invariably located on the right-hand page of a manuscript. Shown below are examples of Malay manuscripts displaying each of these three basic formats of decorative frames: 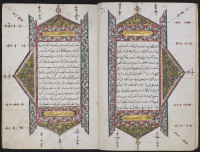 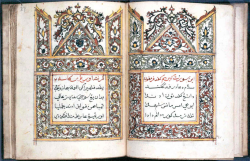 Returning to Hikayat Parang Puting, we find that in fact the narrative proper does indeed commence not within the decorated frames shown above, but overleaf, at the top of a right hand page. Rubrication (red ink) is used to highlight the first words Al-kisah ini hikayat, a time-honoured formula for the start of Malay stories, and then continues with words and phrases familiar from so many other Malay tales: ‘This is a tale of long-ago folks in the heavens, a truly beautiful tale, full of wonders, recounted by the teller of tales. Once upon a time, there lived a heavenly being called Dewa Laksana Dewa …’ (Al-kisah ini hikayat orang dahulu kala duduk di kayangan terlalu indah2 ceteranya, lagi dengan kesaktian maka diceterakan oleh orang yang empunya cetera ini sekali persetua seorang dewa duduk di kayangan bernama Dewa Laksana Dewa …). 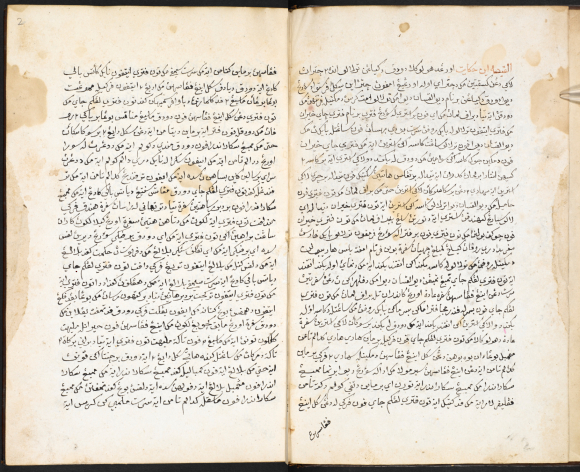 So what is the point of the decorated frames on the first page of the book? They enclose the following 'stand-alone' text: ‘This is a tale of folks long ago, told by the teller of tales, the Tale of the Magic Sword, and of the (grand)son of Dewa Laksana Dewa from the heavens, it is a wonderful story, he had to battle the serpent in the sea to save the princess from being taken by the serpent, that is the story’ (Inilah cetera orang dahulu kala diceterakan oleh orang yang empunya cetera Hikayat Parang Puting anak Dewa Laksana Dewa dari kayangan terlalu indah perkataan maka ia berperang dengan naga di dalam laut dengan sabab tuan puteri hendak diambil naga itu inilah ceteranya). Thus what we have here is, in essence, the title of the story, and its contents. Very occasionally religious texts in Arabic and Malay might have a ‘title page’, comprising a few lines in a tapered triangular format giving the title and author of the work. But this is rare in literary works, and it is almost unknown for such information to be set within decorated frames. As this manuscript of Hikayat Parang Puting was copied for Raffles, it is possible that this ornamental embellishment, unusual in the Malay literary tradition, may have been created by Ibrahim to help serve as a gateway to the Malay text for his English patron.

The implication of European influence in the graphic interplay of text and image in this manuscript is reinforced by another manuscript, that of Hikayat perintah negeri Benggala, 'The tale of the state of Bengal', an account of a journey to Calcutta by Ibrahim’s brother, Ahmad Rijaluddin. Here too the main narrative, heralded with the bismillah, only starts at the top of the second double-page spread. The first two pages, with double decorated frames, serve a different purpose: they present the title of the work and an authorial statement, dated September/October 1811: ‘This is a narrative of the state of Bengal as it was at the time I, Ahmad Rijaluddin, son of Hakim Long Fakir Kandu, left my homeland to visit it.  I have composed this narrative for the benefit of posterity, commiting it to writing in the year 1226, in the year dal awal, in the month of Ramadan’, (Inilah hikayat diceterakan perintah negeri Benggala tatkala masa zaman senda Ahmad Rijaluddin ibn Hakim Long Fakir Kandu belayar / membuang diri ke Benggala.  Maka dikarang hikayat ini meninggal akan zaman diperbuat surat pada sanat 1226 tahun dal awal bulan Ramadan.) 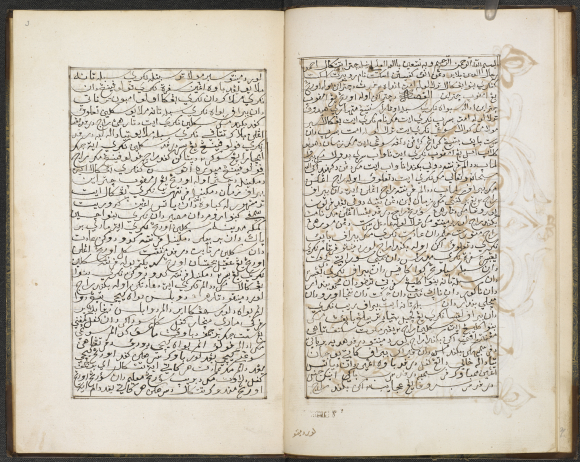 It looks as if Ahmad Rijaluddin had further planned another innovative addition to the end of his manuscript, for after the final page of text he prepared decorative frames on two facing pages. What did he plan to write - a poem? a dedication? a prayer? We will never know, for the pages have been left blank. 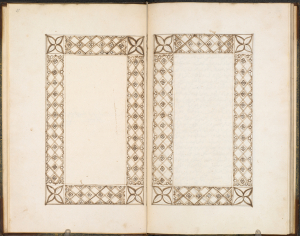 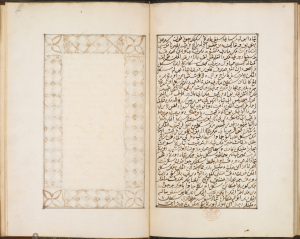 And so these two brothers, Ibrahim and Ahmad Rijaluddin, may be credited for their original and exploratory treatments of Malay title pages. Their efforts did not spark a bibliographic revolution; that had to await the imminent arrival of the printing press in Melaka and Singapore. Nonetheless, these two Malay manuscripts - Hikayat Parang Puting and Hikayat perintah negeri Benggala - can be regarded as being in the vanguard of the movement to expand the graphic frontiers of the Malay book.

Posted by Annabel Gallop at 2:17 AM