The script of the Naxi, their religious literature and early translation attempts

This week’s guest blog post is by Dr Duncan Poupard, Assistant Professor (Translation) at The Chinese University of Hong Kong and Naxiologist. He sheds light on some of the most extraordinary, mysterious and visually interesting manuscripts we hold in the Chinese section of the Library: the Naxi dongba manuscripts, commenting also on some of their early translations in the Library

The British Library holds a modest but important collection of religious texts from a lesser-known people: the Naxi of the Himalayan foothills in southwest China. Among China's officially-recognised ethnic minorities, the Naxi are a relatively small group, especially when compared to their more populous neighbours to the north, the Tibetans. But the Naxi are nevertheless significant, not least for the unique way in which they record their religious literature: the dongba script. 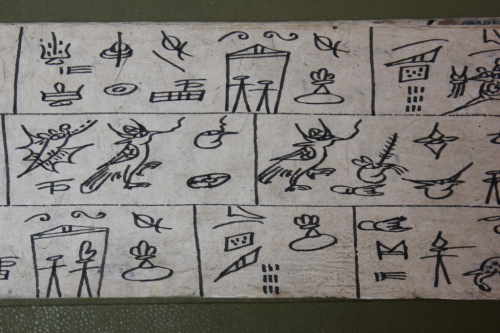 Example of Naxi script, from the British Library volume containing Or.11417A to Or.11426A

This script can probably be dated to at least as early as the Mongol period (1253 -1382). The Naxi ritual texts, hand-written in books and read from left to right, form the basis for what we know about the culture and beliefs of the Naxi people. The dongba script is often touted as the world's last living pictographic script, although this classification is problematic as they are not really in active use, and are not strictly pictographic either.

The graphs can be seen in and around the city of Lijiang (centre of the Naxi population in Yunnan province), on shop fronts and road signs, but as the general populace cannot read or write the script, these signs are mostly for show. 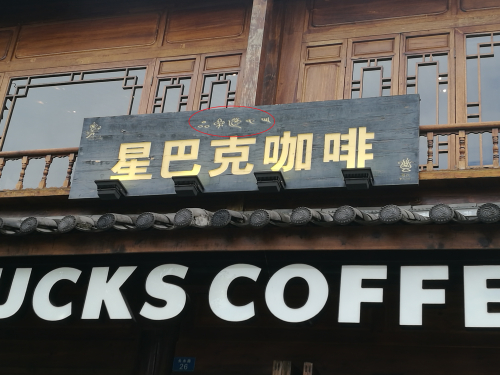 In this picture, the Naxi (top) and Chinese (bottom) names for 'Starbucks' can be seen on the board above the English lettering. In Naxi, 'Starbucks' is translated as 'gee bbaq kee'.

The first character above means 'star' (gee, depicted as three stars), the second and third graphs being phonetic loans, the flower (bbaq) and the dog (kee) together approximating the sound of the English 'bucks'; it is a combination of literal and phonetic translation.

In fact, the script was historically reserved for the dongba religious practitioners and was primarily used for ritual, not secular (or Starbucks-related!) purposes. The books are recited by a dongba during the performance of religious ceremonies such as funerary rites, or when appeasing a vast pantheon of gods and spirits. Looking at the Naxi manuscripts themselves, which are written on specially made paper, and knowledge of which was historically only passed down the male family line, we would be forgiven for thinking they looked like comic strips: especially as they are separated into clearly marked rectangular sections. Of course, however, there's a lot more to this writing than meets the eye.

Detail from the opening page of British Library Or.11417A

The image above is from a manuscript titled Ssee zhul: El-miq Rherq Zhail (Increasing longevity: calling upon the power of great dongba El-miq), recited at a ceremony held after a funeral to prolong the life of the surviving members of the family. This particular book is a call to a powerful dongba from Naxi history, El-miq, entreating him to aid the dongba who is conducting the ritual by investing him with power. In the first section on the top left, after the page decoration on the left, there are a total of ten graphs.

Here we have the character for the sky, beneath it three stars (just as in the Starbucks sign), beneath the middle star a piece of jade, to its right a svastika (a symbol of good luck in Naxi culture that was likely borrowed from Tibetan Buddhism), then an image that looks like a cross on a triangle that originally meant 'to hang (as an object hanging off a cross)', and below it the earth, sprouting tufts of luxuriant grass. To the right we have the more easily identifiable sun, above a person pointing to their left (but our right) and the moon above someone pointing to their right (our left). Lines emanating from the celestial bodies indicate light being cast (and for the sun, by extension, warmth).

This first section is an opening benediction, an incantation that is supposed to bring about good fortune for the ceremony to come, but also contains much of the cosmological wisdom of the Naxi people. These ten characters, when read out during a performance of this text (for all such ritual texts are to be orally performed, not read silently), will become 40 spoken Naxi words. How can this be so? Simply because the relationship between what is written and what is said follows no clearly defined rules. The characters are often called in to use more than once, and much of what is said is not actually written. Despite this, every dongba would be able to recite this section without any problems. An English translation might read,

One may wonder why the sun is on the left and the moon is on the right. The Naxi have a creation myth that tells the story of how, after the heavens and the earth were separated, the people all came together to build the holy mountain Jjuqnalsheel’loq, which acted as an axis mundi, propping up the heavens. Once the mountain was completed, they used a giant iron chain to tie the sun to the left of the mountain and the moon to its right. Thus, in the Naxi cosmogony, the sun and moon rotate around the holy mountain, in between the sky and the earth, and these opening lines are a microcosm of the Naxi cosmogony.

Alongside 107 dongba manuscripts, the British Library holds a number of Chinese and English translations of several of the texts: these were in fact the first Chinese and English translations of Naxi manuscripts to be completed, making them especially important to the history of Naxi studies. The Library's translations were commissioned by the British Foreign Office after a recommendation by S Wyatt Smith (1887-1958). They were acquired by a Pentecostal missionary (probably James Andrews, a British missionary in Lijiang during the 1920s and 30s) on the consul's behalf, and translated into Chinese, with the help of a Naxi to read the manuscripts and a Chinese translator to translate them. Some of the manuscripts were subsequently translated into English at the consulate. As is the case in much of translation history, the translators remain invisible, as the identities of the Naxi, Chinese and English translators have, it seems, been lost to history. The translation work stopped in 1931 as it presumably became prohibitively expensive: three translators were required to get the final English translation, and prices of the original manuscripts in Lijiang were rising as Joseph Rock, the Austro-American explorer and Naxiologist, began to make bulk purchases in the region. 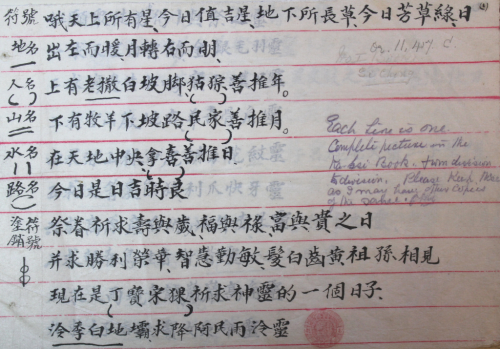 In 1934 the collection was given to the British Museum and the India Office. The 1930s were an exciting time for translations of Naxi manuscripts: many of the English versions that we have today were completed in this decade. There was a serious popular interest in the Naxi during this period, fostered by Joseph Rock's National Geographic articles on the region which highlighted this ‘strange tribe’. Joseph Rock began seriously translating and publishing his work on the Naxi in the 1930s, and he eventually went on to monopolise the field, with a somewhat unassailable combination of exhaustive (some may say pedantic) scholarship, a knack for self-promotion, and deep pockets. 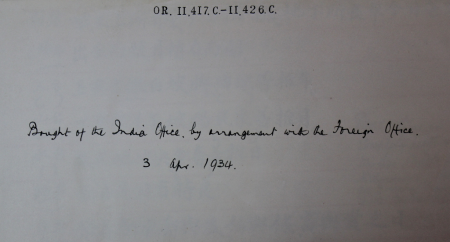 Provenance note on the first page of Or.11417C to 11426C, containing the Chinese translations of the correspondent “A” volumes in Naxi

Rock is dismissive of the Library's translations, writing that they have ‘totally wrong titles and explanations in Chinese’. This is, I believe, an unfair assessment. Even a preliminary look at the translation of this first manuscript shows a quite accurate rendition, with the title, Si Chong, being the correct name of the ceremony in romanisation. Perhaps Rock was unhappy as to the nature of the Library collection's acquisition: some fifty Ssee Zhul texts were acquired by the missionary acting on behalf of the Foreign Office from the officiating dongba after the Ssee Zhul ceremony had been performed for Rock. This was a purchase that transpired without Rock's knowledge.

The British Foreign Office's translations were pioneering, despite being somewhat unilluminating. They are presented without introduction and without any exegesis, which, combined with the large number of proper names present in the texts, makes for slow and mystifying reading for the uninitiated.

Anthony Jackson has suggested that a dictionary (as yet undiscovered) was compiled from this translation work, which would have been used to translate more of the texts without going through a Naxi intermediary. This was probably wishful thinking; to this day, Naxi dongba are required to give a reading of a book before it can be translated. This is because the texts are fluid: there is so much that is not written, there are graphs that are written and not read, and there are incantations that are recorded in a phonetic system separate to the picture-based graphs.

Translation of the Naxi texts is a practice that has all but died out in the modern era, as the remaining dongba grow fewer in number and their traditions become less relevant to modern life in Lijiang. This makes the library's collection all the more invaluable, for there will come a time when such translations will be all but impossible to carry out.