The appreciation of postage stamp designs transcends the mere aesthetic since their designs can be used to enhance our understanding on a range of contemporary concerns relating to heritage. This is best exemplified with the postage stamps of Afghanistan, Iraq, Syria and Yemen depicting heritage sites destroyed, or at risk of destruction from armed conflict.

Islamic Republic of Afghanistan
The Afghanistan 16 July, 1972 9 afghanis stamp (Fig. 1) depicts the Graeco-Bactrian Temple amongst the ancient ruins at Ai-Khanoum situated in present day Takhar Province, Northern Afghanistan. Initially believed to have been the Alexandria on the Oxus, established after Alexander the Great’s conquests in the region, it is now known to date to around 280 BCE during the rule of King Antiochus I. French and Russian Archaeologists worked on the site between 1964 and 1978 but the Soviet invasion of Afghanistan forced the excavations to be abandoned. Tragically, Ai-Khanoum was heavily looted and much of it destroyed during the ensuing conflict. 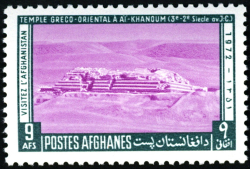 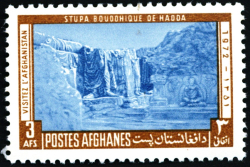 The 3 afghanis stamp from the same issue (Fig. 2) depicts the Buddhist Stupa at Hadda, close to the Khyber Pass in Kandahar Province. Over twenty thousand Buddhist sculptures fusing Buddhist and Hellenic artistic traditions from the second or first century BCE were excavated at the site. Much of this site was destroyed in the Afghan Civil Wars between 1989 and 1986 which followed the Soviet withdrawal from Afghanistan. 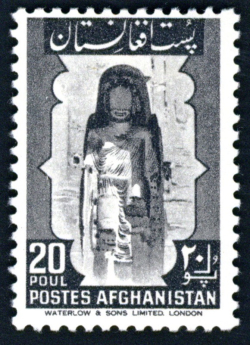 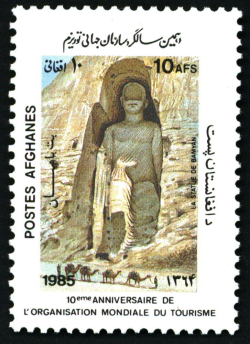 The Afghanistan 21 March, 1951 20 poul (Fig. 3) and 27 September, 1985 10 afghanis (Fig. 4) stamps both depict the largest of the Bamiyam Buddhas, situated in the Hazarajat region of Central Afghanistan. Part of the historic silk-road trade route linking India and China, Bamiyan was an important Buddhist holy site. Statues of the Buddha were carved out of the sandstone cliffs during the sixth century. The largest being 55 metres in height was once renowned as the tallest Buddhist statue in the world. In March 2001 the Taliban’s Military and Spiritual leader, Mullah Mohammed Omar, ordered the destruction of the Bamiyan Buddhas. Their destruction immediately sparked outrage and condemnation within the international community. In an interview Mullah Mohammed Omar stated that he ordered the destruction of the Buddhas as an act of protest and outrage against the vast sums of money being offered to conserve such ancient sites whilst millions of Afghans faced real privation. Nevertheless the act of destruction was widely regarded by the United Nations, UNESCO and others to be an act of iconoclasm by the Taliban.

Syrian Arab Republic
Elsewhere, the Syrian Arab Republic 10 October, 1968 Ancient Monuments issue also includes a number of stamps depicting heritage sites destroyed or at risk from conflict. The 15p stamp (Fig. 5), depicts the Monastery of St. Simeon the Stylite, established during the fifth century northwest of Aleppo. The Monastery is one of the oldest surviving Byzantine Churches in the world and consequently the church and village were designated a world heritage site by UNESCO in 2011. Initial fears for the site’s safety were raised during the Syrian conflict whilst it was under the control of Islamic State forces who have garnered widespread notoriety for their practice of destroying Islamic, Christian and other historical sites. Although safely recaptured by Kurdish forces in 2015, the monastery was heavily damaged by a possible air strike on 12 May 2016. 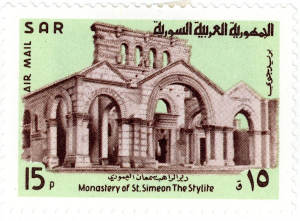 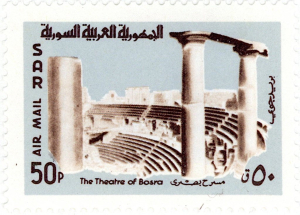 The 50p stamp from the same issue (Fig. 6) depicts the Roman Theatre at Bosra situated in the district of Dar’a in south-western Syria. Carved out of black basalt in the mid second century CE, the theatre has a seating capacity for 15,000 people making it one of the largest and best preserved ancient roman theatres in the world. In March 2015, video footage was released showing rebel and Syrian Government forces battling amongst the ruins which resulted in the destruction of statues and shattered the stone work.

The second series of the Syrian Arab Republic 20 January 1969 Ancient Monuments Issue are also significant. The 25p stamp (Fig. 7) depicts the Baal-Shamin Temple in Palmyra which was consecrated in 32AD for worshipers of the Mesopotamian God Baal. Under Byzantine rule the temple was converted into a Christian Church before being again converted into a Mosque in 1132. The Mosque remained active until the 1920s when Franco-Syrian archaeological missions removed the post-classical additions to the site as part of a restoration process. The ruins were amongst the best preserved in Palmyra until August 2015 when Islamic State forces searching for hidden gold used explosives to demolish the site.

The 16p stamp from the issue (Fig. 8) depicts the Shrine of St John the Baptist housed in the Umayyad Mosque, Damascus. Built on the site of an old Christian Church in 634 CE, the Mosque is one of the oldest and largest in the world, widely regarded as Islam’s fourth holiest site. It houses the Shrine of St John the Baptist, a religious figure of importance to both Christian and Muslim believers. The tomb of the great Muslim leader, Saladin in also situated within an adjoining garden. For centuries the site has been a place where both Christians and Muslims have worshipped alongside one another peacefully. Although it remains undamaged, fears for the site's safety were raised in November 2013, after a mortar round landed perilously close to the mosque killing several people. 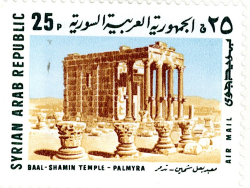 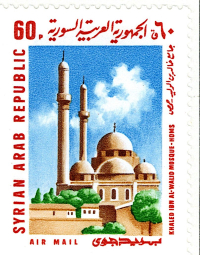 Finally the 60p stamp (Fig. 9) depicts the Khaled ibn al-Walid Mosque in Homs, Syria. Although the current building was constructed in the twentieth century, the Mosque has been located at this site since 1265 CE. It is dedicated to and holds the mausoleum of Khalid ibn al-Walid, a military commander who led the Islamic conquest of Syria in the seventh century putting an end to Byzantine rule in the region. During the Syrian Conflict, the mosque was held by anti-government rebels and was consequently in 2013 shelled on a number of occasions causing significant damage to the building and tomb.

Republic of Iraq
A notable set of stamps depicting cultural sites impacted by the various conflicts in Iraq is the Republic of Iraq 1 December 1967 International Tourist Year Issue. The 15 fils stamp (Fig. 10) depicts the Minaret of the Great Mosque of al-Nuri in Mosul. Established in 1172, the mosque was named after Nur al-Din Mahmoud Zangi, a Turkic ruler of Mosul and Aleppo who ordered its construction. Having undergone significant development over the centuries, the mosque was made famous by its leaning cylindrical minaret nicknamed ‘al-Hadba’ (the hunchback) which was covered with elaborate Iranian style brickwork and surmounted with a white dome. In July 2014 Abu Bakr al-Baghdadi made his first appearance as IS leader at the mosque and announced the establishment of a Caliphate. Sadly in July 2017, IS forces used explosives to demolish the site during their retreat from Mosul. 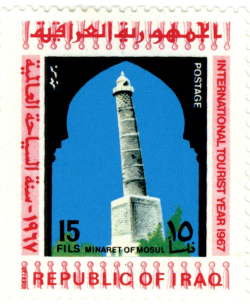 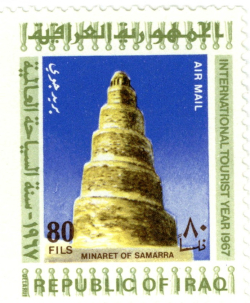 The 80 fils stamp (Fig. 11) depicts the Minaret of Samarra, originally part of the Great Mosque of Samarra constructed between 848 and 851CE. Although the mosque itself was destroyed in 1278 during the Mongol Invasion of Iraq; its outer wall and iconic minaret known as the Malwiya Tower survived. Constructed of sandstone, the minaret is a spiralling cone fifty-two metres high and thirty three metres wide with a spiral ramp. During the Iraq War, US troops used the top of the minaret as a lookout position, making the site a military target. Consequently in April 2005 Insurgent activity resulted in the top of the minaret sustaining bomb damage.

Yemen People’s Democratic Republic
The Yemen People’s Democratic Republic 15 December, 1998 International Campaign for the Preservation of Old Sana’a Issue, 75 fils (Fig. 12) depicts the city’s skyline. Yemen’s largest city is recognised to be one of the oldest continuously inhabited cities in the world and contains many architectural wonders including the Great Mosque of Sana’a, the ancient clay walls and the Yemen Gate all of which are over a thousand years old. Declared a world heritage site by the United Nations in 1986, many of the city’s important historical sites including the ninth century mosque of the prophet Shuaibi are being destroyed or damaged by military action in the ongoing conflict in the country, largely a result of aerial bombardment by Saudi Arabia with the backing of other nations. 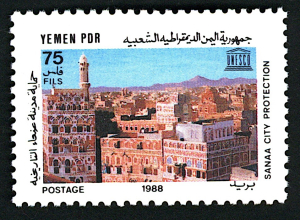 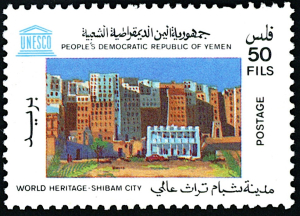 The Yemen People’s Democratic Republic 28 August, 1985 UNSECO World Heritage Site, 50 fils issue (Fig. 13), depicts the iconic skyline of Shibam, another of Yemen’s cultural sites at risk from military conflict. The city is famous for possessing some of the oldest skyscrapers in the world, made from mud brick, many of which rise to between five and eleven storey’s high. Although the town has existed for almost two thousand years, many of these houses originated in the sixteenth century although they have been continuously rebuilt. These historic buildings have been at increasing risk from damage since 2009 when it was targeted in an Al-Qaeda attack- and remain so due to the ongoing conflict in the country. Sadly the destruction and damage sustained to many important heritage sites throughout these regions is set to continue for the foreseeable future. It is a sobering thought that many of the cultural heritage sites depicted upon postage stamps from these nations might not be with us for much longer.

Posted by Ursula Sims-Williams at 12:00 AM