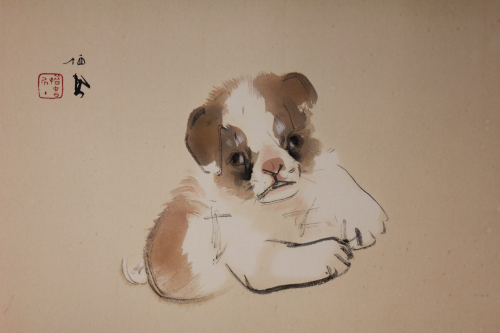 The lunisolar calendar is used traditionally in China and other East Asian and South East Asian countries. According to it, on the 16th of February we celebrate the arrival of a New Year: the Year of the Earth Dog. In fact, the lunisolar calendar consists of 12 cycles associated with 12 zodiac animals, which are combined with one of the Five Elements of traditional Chinese cosmology (Wu xing: Wood, Fire, Earth, Metal and Water), together forming cycles of 60 years. This is why the upcoming Chinese New Year is the year of the “Earth Dog”. 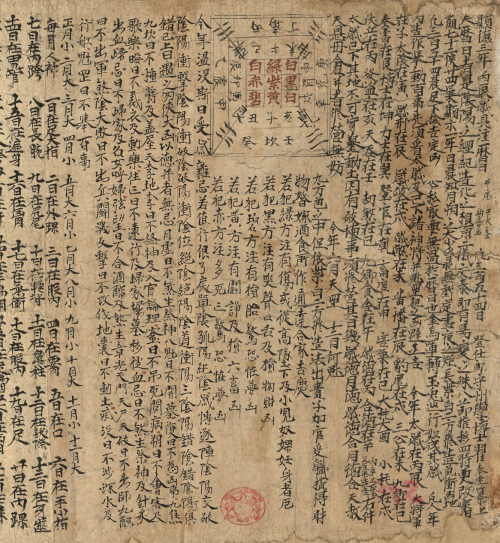 Detail from a Chinese Almanac dating from c. 956 by Zhai Fengda (British Library Or 8210/s.95). The item has been fully digitised by the International Dunhuang Project and can be discovered here

According to the Chinese horoscope, people born in the year of the Dog are responsible, practical and faithful. They show persistence and loyalty. 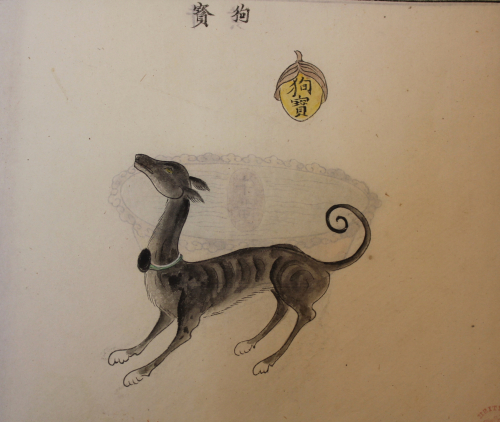 Illustration of a dog from the album “Coloured Drawings of Chinese Flora and Fauna”, 18th century, China (British Library Add. 15503)

Many Chinese Emperors kept dogs as pets and treated them as if they were members of the imperial family! Emperor Qianlong even commissioned a series of paintings of his “Ten Prized Dogs” (Shijun quan十駿犬) from the Italian missionary and artist Giuseppe Castiglione (1688-1766). 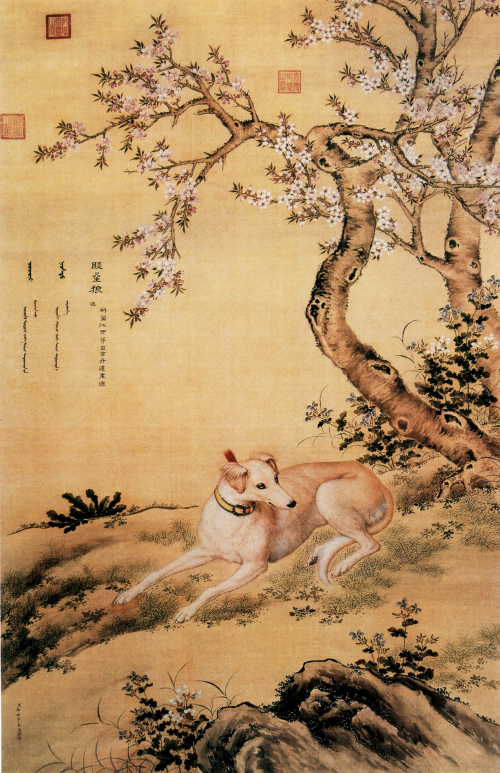 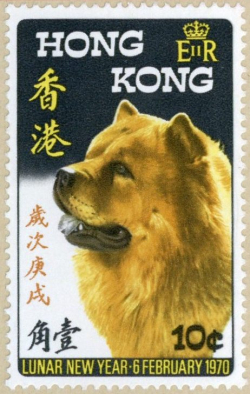 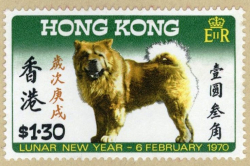 The Year of the Dog in Japan 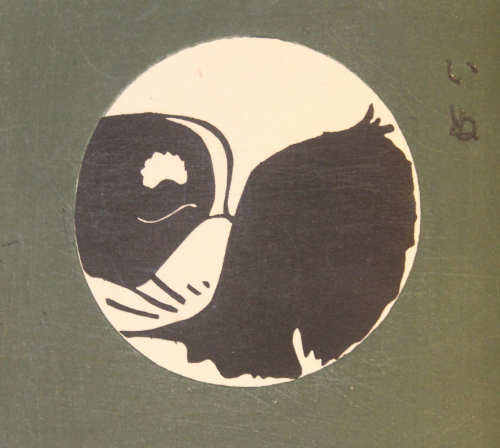 In Japan, dogs are traditionally regarded as symbols of loyalty and protection. They are entertaining playmates and faithful companions. 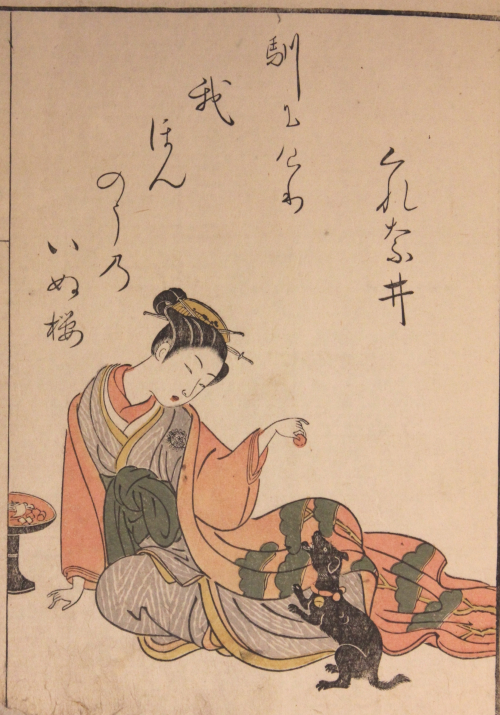 Dogs are also traditionally associated with easy childbirth and the protection of pregnant mothers and young children. This can be seen in the ritual of ‘obi-iwai’ in which on the first ‘Day of the Dog’ of the fifth month of a woman’s pregnancy a cotton belt (obi) is tied around her abdomen to protect the baby and ensure a safe delivery. Small dog figurines called ‘inu hariko’, often made of papier-mâché, are sold at many shrines and temples and are given to young children to protect them from ill health and bad luck. 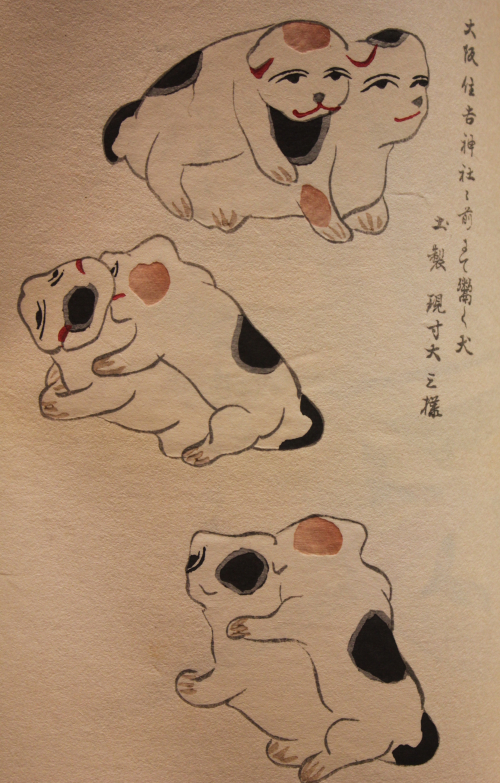 A dog playing with a straw sandal. From Seihō gahakuhitsu junishi-jō, an album of 12 images, one for each of the zodiac animals, by Takeuchi Seihō. Ca. 1900-10 (British Library ORB.40/710)

The Year of the Dog in Thailand 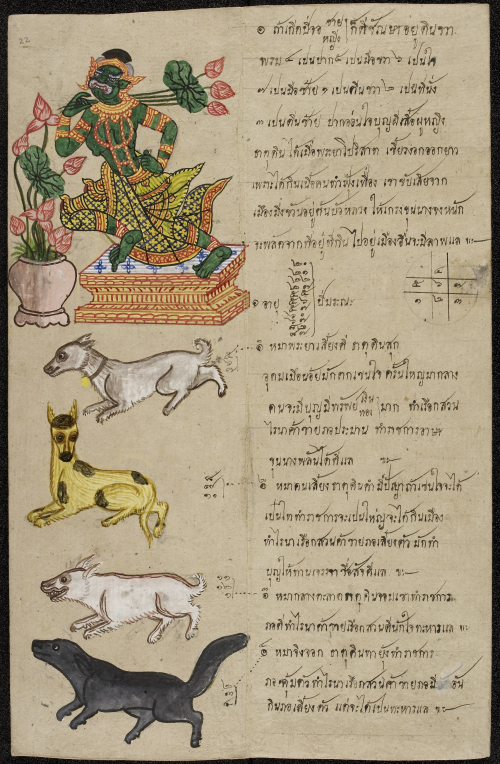 Folio of a Thai Phrommachāt manuscript dealing with predictions for people born in the Year of the Dog. Dated 1885 A.D. (British Library, Or.3593 f.22). This item has been digitized and can be discovered here.

In the Thai tradition the Chinese zodiac was adopted for the purpose of divination and horoscope making, laid down in manuscripts called Phrommachāt. For each year, certain predictions are associated with the animal of the zodiac in combination with the constellations of planets, sun and moon.

For the Year of the Dog, the following predictions were made:

‘A yakkhini [female ogre, demon] rides the Dog, and the element is Earth. The khvan [life essence, soul] lives in wild almond trees or in royal lotus. Mercury is the mouth, which cannot speak pleasantly, except to serve its own ends. Venus is the heart: brave-spirited and would like to serve the rulers, enjoying scenes of battle, but will be handicapped by bodily weakness. Moon is the loins: weak sensuous desires. Jupiter and Saturn are the hands: skilful and expert in crafts. Sun and Mars are the feet: no desire for travel. Liable to facial sores and to indigestion. Will have adequate wealth and enough slaves. Garden cultivation would be profitable. Will have a son as a support.’
(Wales, H. G. Quaritch, Divination in Thailand. The Hopes and Fears of a Southeast Asian People. London/Dublin: Curzon Press, 1983, p. 17). 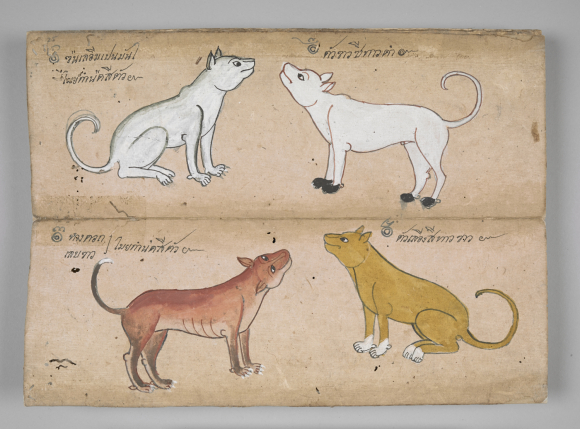 Various types of dogs illustrated in a 19th century Thai medical treatise (tamrā phāēt). This medical treatise contains illustrations of animals that are believed to have a certain influence on peoples’ health and wellbeing. (British Library Or 16799, f025r). This item is fully digitised and can be discovered here

We wish all our readers a wonderful Year of the Dog!