The Lotus Sūtra, whose earliest known Sanskrit title is the Saddharma Puṇḍarīka Sūtra and means “Sūtra on the White Lotus of the Sublime Dharma,” was possibly composed between the first century BCE and the second century CE. It is thought to contain the Buddha’s final teaching, complete and sufficient for salvation. Through the medium of parables and short stories, it delivers the message that all sentient beings have the potential to attain Buddhahood. As such, it is one of the most influential scriptures of the Mahayana branch of Buddhism, and it is highly regarded in a number of Asian countries, including China, Korea and Japan, where it has been traditionally practised. 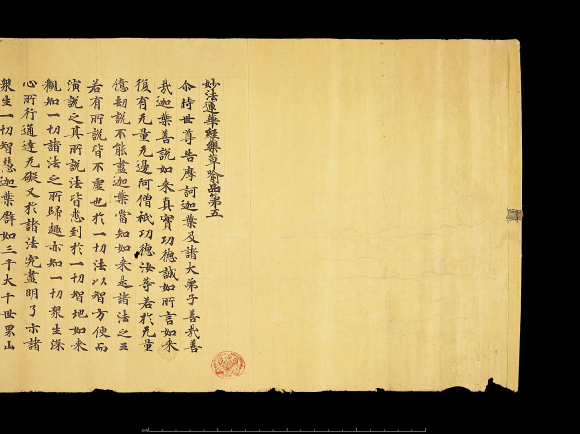 Frontispiece of Chapter 5 of the Lotus Sūtra, "The Parable of the Medicinal Herbs" (British Library Or.8210/S.1511)

Images and scenes inspired by the Lotus Sūtra can be seen in the murals adorning the caves of the Mogao Buddhist complex, near the oasis-town of Dunhuang, Gansu. An estimated 4,000 copies of the Lotus Sūtra were also found in one of the caves, commonly called the Library Cave or Cave 17. They are now dispersed across various institutions in Beijing, Paris, St Petersburg and London. In the British Library's collection, the Lotus Sūtra outnumbers all the other Chinese Buddhist texts brought back by Sir Aurel Stein during his second expedition to Central Asia (1906-1908). There are over a thousand manuscripts, some of which are scrolls measuring up to 13 metres long. 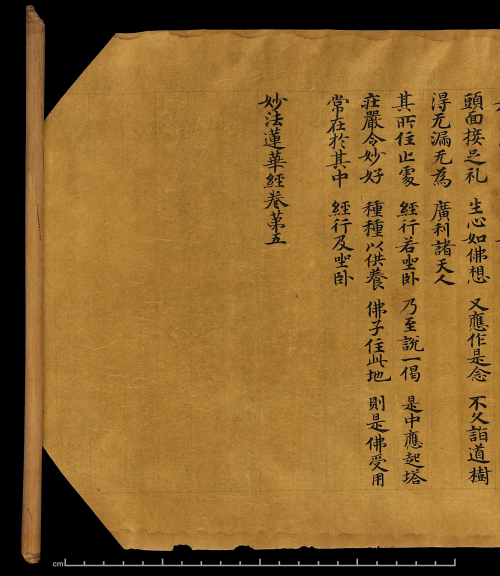 If a few have already been digitised and are now accessible via the International Dunhuang Project (IDP) website, a large proportion has remained practically untouched since their discovery in 1907 and is currently unavailable online. Thanks to a generous grant from the Bei Shan Tang Foundation, in Hong Kong, work is now underway to address this issue. The aim of this four-year project is to conserve and digitise nearly 800 copies of the Lotus Sūtra in Chinese, with a view to make images and information about them freely accessible on the Internet.

For the past six months, I have been busy checking the condition of all these manuscripts in order to plan both the conservation and digitisation workflows for the years to come. I have been extremely lucky to be joined in this task by three colleagues from the British Library Conservation department, who have volunteered some of their precious time to assess the collection with me. Together, we have been writing up detailed condition status reports to facilitate future conservation treatment and handling during photography. Another important part of my curatorial role has also been to enhance information on each of the corresponding catalogue recor

Meanwhile, Vania Assis, full-time conservator for the project, has started conserving the scrolls. Although an initial estimate based on a sample of manuscripts had established that between 200 and 300 items would need to be conserved, the ongoing assessment of the scrolls has so far revealed that most of them require some level of intervention. They are extremely fragile: they present tears, missing areas, creases and other damage that make photographing them in their current state inadvisable. Vania has already completed treatment of more than 50 items and will tell you about her amazing work in a separate post.

The project's team should soon include two senior imaging technicians, who will be ensuring the digitisation of the Lotus Sūtra copies. We will let you know how the project progresses and will post updates as regularly as possible, so watch this space!