Adam Munni Ratna, a Buddhist monk in England in 1818

The Visual Arts section has recently acquired a portrait of Adam Sri Munni Ratna, a Singhalese Buddhist monk, who accompanied Sir Alexander Johnston (1775-1849) from Sri Lanka to England in 1817-18. Raised between Scotland, Madras and England, Johnston would be appointed as the President of the Council of Sri Lanka (Ceylon) in 1811 and be a founding member of the Royal Asiatic Society in Great Britain in 1823. Fluent in multiple languages including Tamil and Telegu, he was in regular communication with local Buddhist priests who elucidated Buddhist judicial matters and were instrumental towards helping Johnston to establish trial by jury on the island. In 1817, Sri Munni Ratna and his cousin Dharma Rama, approached Johnston and requested his support to travel to England as it was understood that they were keen to learn about Christianity after reading the Singhalese translation of the New Testament by the Wesleyan ministers in Colombo. Ratna was in his late twenties. 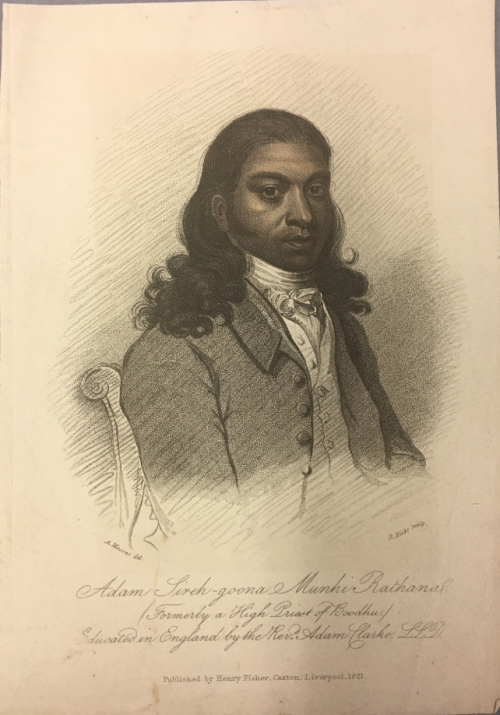 Arriving in England in May 1818, the two monks were met by Dr. Adam Clarke (1762-1832), an Irish Methodist and well known scholar on the New Testament who took it upon himself to look after them. Later in his life, Clarke would become a notable collector of Arabic, Persian and Syriac Manuscripts. In 1820, Clarke wrote: ‘did so; and in doing it encountered many difficulties, which, because the good hand of my God was upon me, I surmounted; and, after twenty months instruction under my own roof, I was fully convinced that they were sincere converts to the Christian religion, and that their minds were under a very gracious influence. At their own earnest desire I admitted them into the church of Christ by baptism’.

An Account of the Baptism of two Budhist Priests by Adam Clarke as observed and written by Philoxenas provides the detailed account of the education the Singhalese monks received while living in Millbrooke, Clarke’s home near Prescot. As Clarke could not speak Singhalese or Tamil and the monks did not understand English, ‘the teacher and his pupils formed, in effect, a language for themselves, and that principally out of the Portuguese, Cinghalese and Sanscrit [sic]: these helps, however proved insufficient; but Dr C. had the high satisfaction of frequently witnessing, that his pupils, under the immediate influence of a Divine Teacher, comprehended his meaning..’ 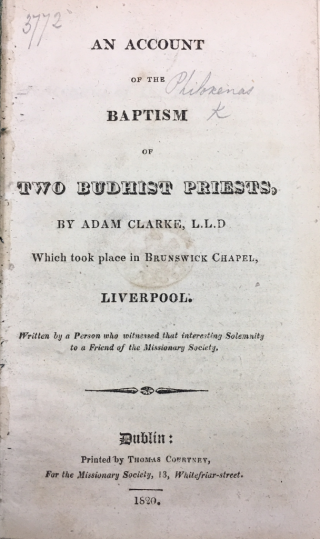 During their brief stay in England, several portraits of the Buddhist monks and their tutor Adam Clarke were produced. In the collection of the John Wesley’s House & Museum of Methodism, is a portrait by the artist Alexander Moses. This 19th century orientalist painting features Clark seated in a chair in his library with one of the monks seated in a chair and pointing to a manuscript, possibly a copy of the New Testament. An engraved version of this painting was published in 1844. In comparison, our newly acquired portrait instead features the Singhalese monk dressed in western clothing, including a suit jacket and a cravat. In the period following their baptisms, Munni Ratna and Dharmma Rama returned to Ceylon where they entered into government service (Sivasundaram 2013, 111) 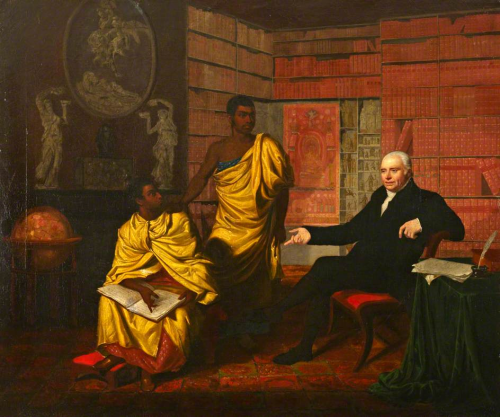 Adam Clarke and Two Former Buddhists by Alexander Mosses (1793–1837). Image reproduced with the permission of The Trustees of Wesley’s Chapel, John Wesley’s House & The Museum of Methodism.