Burmese puppet shows (yokthe pwe) were a popular entertainment under the Burmese monarchy, and possibly date back to the Pagan kingdom of the 11th century. Historical sources show that puppet plays have certainly been performed since the early 15th century, and rapidly grew in prestige and popularity in the 17th century. By the 18th century, puppet shows were common in ordinary Burmese circles, and were seen as a means of educating people in history, religion, culture and everyday life. At court, puppet shows were patronized by the Burmese kings, and the Thabin-wun (Minister for the performing arts) was in charge of performances.

The string puppets used in Burma (Myanmar) are made of wood, ideally Yamane wood (botanical name, Gamelina arborea) which is light and soft. Teak is also used, but it is heavier than Yamane wood. The size of the puppets varies from one to three feet tall, with small dancing puppets while non-dancing puppets are made larger. The standard repertoire involves a troupe of 28 puppets of characters comprising a nat (deva), sakka (ruler of the Tavatimsa heaven), zawgyi (alchemist), a king and queen, four ministers, a prince and princess, a hermit, a pageboy, punna (brahmin), bhilu (ogre), nat kadaw (spirit medium), two prince regents, a handmaiden, and animals including tiger, horse, elephant, monkey, parrot, garuda (mythical bird, in Burmese galon), naga (serpant), kinnara and kinnari (mythical birds). Each puppet has its own style of dancing, with accompanying song and music. 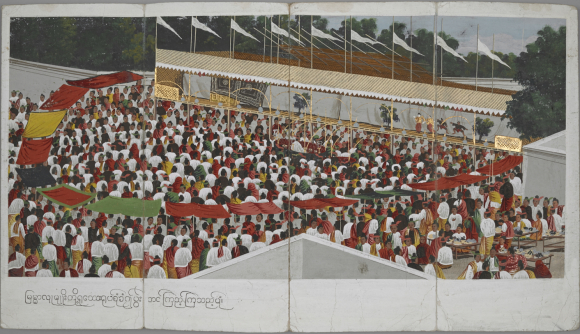 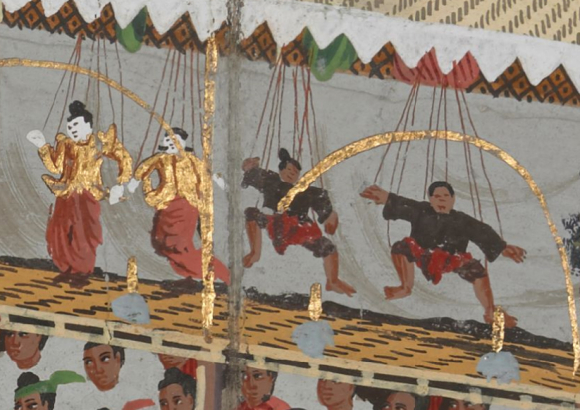 A late 19th century Burmese manuscript in the British Library (Or.14031) contains painted scenes of a courtly puppet show and dramatic performance. The painting on folio 9 is inscribed on the bottom left in English, ‘Maung Tsa Painter.’ This identifies the painter as Saya Sa, the son of the most famous court painter U Kya Nyunt, who served as a royal artist to King Mindon (r. 1853-1878). Saya Sa was also a royal artist at the Burmese court, who served King Mindon’s son and successor, King Thibaw (r. 1878-1885). The illustration above shows the stage for the puppet show which is built of bamboo and thatch. The marionettes on the stage are surrounded by green trees. The white backdrop is about waist high. The puppeteers who work behind the curtain are visible to the audience. The stage is bare except for a male and female dancers and page boys against the white backdrop. The duet danced on the stage is performed by the leading characters in romantic scenes which are favourites with the audience. The puppets are dressed in real clothes and the puppeteers skilfully make their puppets act like living performers. The show is held under the open sky, and the grounds are filled with people who stand to watch the show. Spectators, enjoying the free entertainment, walk along the line of food stalls in the bazaar in the marionette theatre grounds.

The puppet show was allowed to use a stage as the puppets would otherwise be too small to be seen, and was hence termed amyint thabin (raised performance). However the puppet theatre was the only form of entertainment allowed to use a stage at the royal court at that time, and other entertainments performed by men and women could only be staged on the ground. Amyint thabin was later called yoke thay, and the popular saying, tha bin a sa yoke thay ka, ‘dance and drama began with marionettes’, reflects the prestige of the puppet theatre.

The themes of the puppet plays were based on the Buddha’s previous births (Jataka stories), Buddhist fables and stories, folktales and incidents in Burmese history, including the history of the pagodas. The last ten Jataka tales were very popular as they describe the perfection of ten important virtues. People learned about history, astrology, court intrigues and ethics from puppet plays.

The painting above, from the same manuscript, portrays a royal dramatic performance. The king is shown on the stage on the right watching the court musicians and dancers in the large white umbrella hall shown in the centre. Two drum circles are in place on either side of the stage, and alongside each of them is a brass gong circle. The drum circle consists of 21 drums, and the player sits within the circular frames and strikes the drums with his bare fingers and the heels of his hands. The brass gong circle is similar in design and there are 18 brass gongs. The player sits in the middle of the gongs and strikes them with a short knobbed stick (glimpsed on the left). In the centre, the male and female dancers sing and dance the duet hna-par-thwar. All the dancers and musicians perform on the ground, as they are not allowed to dance on a stage.

A Burmese puppet troupe includes puppeteers, singers and musicians. The most complex aspect of the art of the Burmese marionette is the working of the marionette strings. 16 strings are attached to the head, hands and feet of each puppet, and these strings are then attached to a cross-piece handle. The puppeteer needs great skill to hold the handles in both his hands and pull the strings to make the marionettes perform delicate movements. The vocalists sit behind the screen and the puppeteers stand behind the screen to handle the puppets, working in conjunction with each other. A skilful puppeteer can operate the puppet in time with the vocalist’s dialogue or song, bringing the puppets alive. Some vocalists could sing both male and female voices, playing many different roles. Sometimes the puppeteer is able to perform both tasks, to sing and to manipulate the strings at the same time. 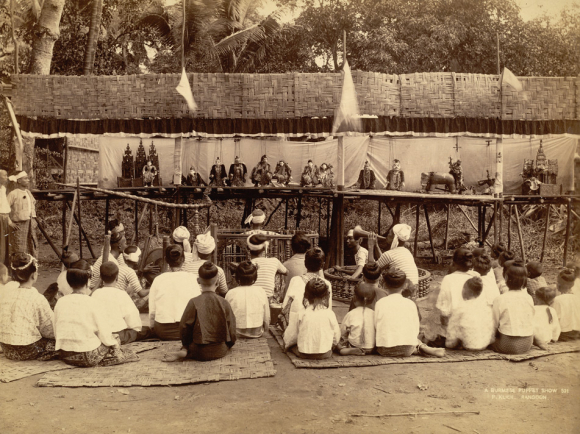 The marionette stage in the photo above is built of bamboo. A group of some thirty people are seated on bamboo mats spread on the bare ground, watching the performance. The puppets are arranged on the stage, and in front is the saing (puppet troupe orchestra). At one side of the stage is a throne, and puppets such as the king and queen, the prince and princess, the hermit, the minister, the page boy and the elephant can be seen on the stage. The hermit puppet is depicted as a religious image and is treated with respect by puppeteers. The scene being performed is set at the royal court and involves the king, queen and the minister.

In the present day, puppet shows can be seen at pagoda festivals in Rangoon and Mandalay, which are still occasions for traditional entertainment, with food and other bazaar stalls in the festival grounds. The dance style of the puppets differs from that of humans, but nowadays in Burma we see human performances adopting puppet characteristics and movements, as professional artists try to save this beautiful art form from disappearing.

Posted by Annabel Gallop at 3:45 AM