Making his mark: the seals of Tipu Sultan

Over the past year or so I have been working on the library of Tipu Sultan, Sultan of Mysore (r. 1782-1799), of which an estimated 600 volumes were deposited in the library of the East India Company between 1806 and 1808 and again in 1837 after the Library of its college at Fort William was disbanded (for more on this see my earlier post Revisiting the provenance of the Sindbadnamah (IO Islamic 3214). By now I have examined well over half of the British Library manuscripts, and a few in other libraries, but have been surprised at how few of the volumes actually contain the seal of Tipu Sultan himself. So far I have found only twenty-eight, some with more than one impression. With the exception of one, they can be divided into three basic types: a personal seal dated 1186 (1772/73), and official seals dating from 1215 (1787/88) and 1223 (1795/96) of the muhammadi or mawludi era. 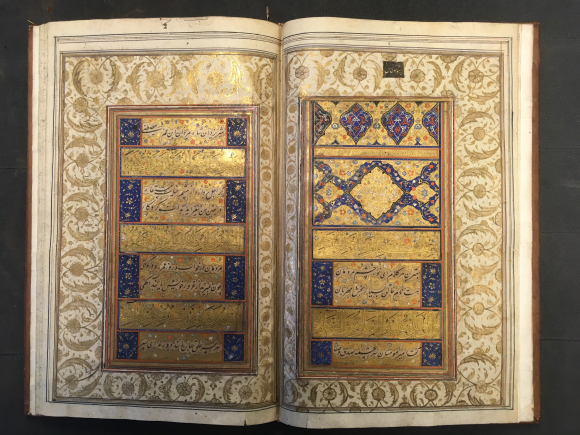 The opening pages of the highly illuminated and calligraphic Miʼat kalimah ʻAlīyah ʻālīyah Murtaḍawīyah (the 100 sayings of  ʻAli ibn Abi Talib) with an interlinear Persian verse translation. Tipu's personal seal dated 1186 (1772/73) is placed at the top. This manuscript was probably acquired in 1780 when the previous owner Nawab ʻAbd al-Vahhab was defeated by Hyder ʻAli’s forces and was despatched to Seringapatam with his family as prisoners (British Library IO Islamic 1662)

Tipu's personal seal
In many ways this is the most interesting of the three seals as it perhaps reflects Tipu's personal interests. The rectangular seal is inscribed Tīpū Sulṭān 1186 (1772/73), measuring 16 x 11.5 mm (interior measurement: 15 x 11 mm). The seal predates Tipu's accession to the throne at the end of 1782 after the death of his father Hyder ʻAli. 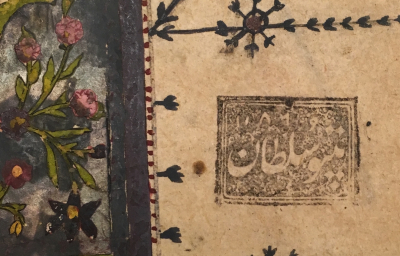 It would take too long to go into details here and I hope to write more fully about it later, but to summarise, of the twenty-one volumes discovered so far, fourteen are volumes of poetry by Amir Khusraw, ʻAttar, Nasafi, Ahmad-i Jam, Zulali, Kamal Khujandi, ʻUrfi, Ahsan Allah[1] and others (but surprisingly not Firdawsi, Hafiz or Nizami). Other works with Tipu's seal include four historical works, a dictionary and two works on letter writing (inshāʼ). For the most part these volumes are very ordinary, only two, for example IO Islamic 1662 illustrated above, could be described as high quality. Since there were many other deluxe volumes in his collection which did not carry his seal, we can perhaps assume that it was the content Tipu especially valued.

It is not known when these manuscripts were acquired though at least five had belonged to Nawab ʻAbd al-Vahhab of Chittoor, brother of Muhammad ʻAli Nawab of the Carnatic, who was taken prisoner with his family in 1780. Another manuscript had belonged to the Qutb Shahs of Golconda and includes the seals of Muhammad Quli Qutb Shah (r. 1580-1612) and his successor Muhammad Qutb Shah (r. 1612-26) – his seal dated 1021 (1612/13).

The one exception to these otherwise literary manuscripts is IO Islamic 4683: a collection of original documents from Seringapatam bound together in one volume. This seal occurs occurs on documents dated 15 Jaʻfari, year Azal 1198 AH (1784), and 1 Ahmadi, year Dalv 1200 AH (1786), ie. dating from before 1787, the date of the earlier of his two official seals described below.

Official seals of 1787 and 1796
Within a few months of ascending the throne Tipu instigated calendrical changes by renaming the twelve months and the year names of the 60 year cycle, while still also using the traditional hijri era for the year. An example of this can be seen in the documents mentioned above. However in his fifth regnal year, he established a new lunisolar system which he called muhammadi or mawludi[2], ie. dating from the supposed spiritual or actual birth of the Prophet which he believed to be thirteen years before the hijra in 622. A further innovation was to record the numbers from right to left instead of the usual way round, from left to right.

The reasons for establishing this new era are not clear but Kirkpatrick (Select Letters, p. xxxi) mentions a letter dated 29 Izadi (11th month) of the year Dalv, ie. at the beginning of 1787, written shortly before the change, in which Tipu Sultan requested information from scholars as to the exact dates of the birth, mission and flight of the Prophet. 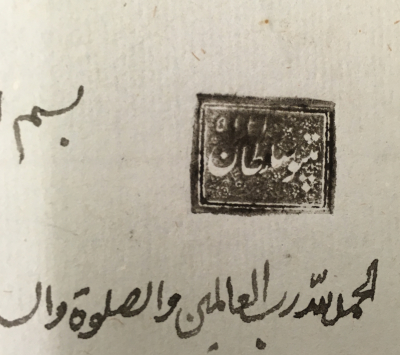 This seal has been found in three volumes so far:

Eight years later a second seal was introduced. A description of this seal is given in Z̤avabiṭ-i Sulṭānī, regulations issued 21 Haydari, Hirasat, 1224 corresponding to 19 Rabiʻ I, 1211 hijri (22 September 1796) on the correct royal insignia to be used in seals and standards, and on the form of official cyphers to be used in different government departments. Instructions are given there for the special seal (muhr-i khāṣṣ) to measure one finger (angusht) by half with the tughra Tipu Sultan in the shape of a tiger’s (shīr[4]) mouth, and the four corners to carry the letters maw lū d-i Muḥammad. The tughra was also to contain 6 tiger (babrī) stripes. 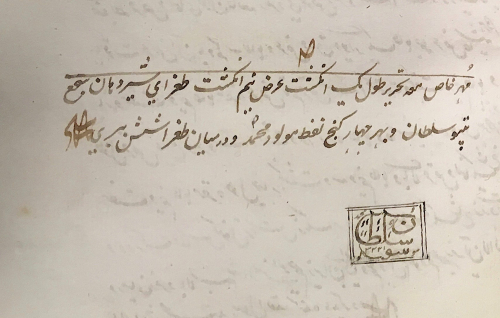 The design of this new seal is another example of Tipu's fondness for the tiger motif and was presumably introduced in 1796 to coincide with the orders. It reads: Tipū Sulṭān 3221 [ie. 1223] Maw lū d-i Muḥammad (1795/96). It measures 19 x 15 (17 x 13 mm) and like the earlier seal is found on documents and government manuals of which several copies exist. 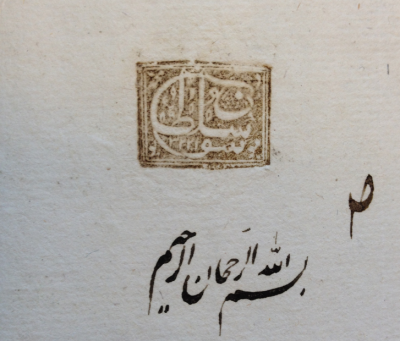 This seal has been found in five volumes so far:

Wax impression of a further official seal
Finally a unique  example of a European style wax sealing is found in IO Islamic 4683 attached to a consultation to Tipu's six government departments, dated 15 Ahmadi, Shadab (April 1798). The left-hand seal is inscribed yā ḥāfiz̤, and is possibly dated 1219 (1791/92), but if so, it is quite a few years earlier than the document it is connected to. Unfortunately I haven't been able to decipher the right hand seal. There were no doubt other seals of this type, but by virtue of their ephemeral nature they have not survived. 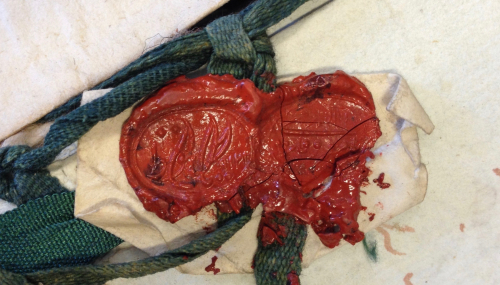 [1] Royal Asiatic Society RAS Per 310.
[2] See Kirkpatrick, W., Select Letters of Tippoo Sultan to Various Public Functionaries ... London, 1811, especially his notes on the calendar and Mauludi era, pp.xxvi-xxxvii; also Henderson, J.R., The coins of Haidar Alī and Tīpū Sultān. Madras, 1921. p. 28.
[3] The first year of the mawludi era is sometimes reckoned as 1786-7 AD, but fortunately some documents are dated in both the mauludi and the hijri era which makes a start date of 1787-8 incontrovertible.
[4] Shīr usually refers to a lion, but there is no doubt that tiger is implied here because of the babri 'tiger' stripe.

Posted by Ursula Sims-Williams at 2:20 PM