Last month as part of a pilot on using three-dimensional modelling at the British Library's Digitisation Studio, a few objects from the Visual Arts section were photographed and rendered using a Cyreal 3D camera rig and made available through Sketchfab. One of the objects selected is the terracotta model of 'Ummeechund', a trooper of Skinner's Horse which painted using polychrome pigments and modelled with wires and an armature. It measures 28.5 cm high. The trooper is featured wearing the distinctive long yellow coat with red trimmings, a black jacket with red frogging, a tiger-skin bandolier, a tall shark marked with a crescent and with red trimmings and tassels, and white pantaloons. His left hand rests on the hilt of his upright sword. As the trooper was last displayed in the Mughal India: Art, Culture and Empire exhibition at the British Library from 2012-13 and now currently in storage, it was the ideal candidate for digital modelling as it is fragile.

Skinner's Horse was the regiment of irregular cavalry established by James Skinner (1778-1841) in 1803 in northern India. As Skinner was an Anglo Indian, son of a Scottish solider and Rajasthani mother, he was not allowed to serve in the East India Company as a solider and established an independent cavalry. Skinner initially supported the Marathas against the British, but changed sides in 1803. In 1814, he established the second regiment of the irregular cavalry to support the British against the Nepalese. Aside from establishing Skinner's Horse or the 'Yellow Boys', Skinner is recognised as a key patron of art in Delhi during the first half of the 20th century. Skinner was close friends with artist James Baillie Fraser and his brother William Fraser, the Assistant to the Resident at Delhi from 1805, who were also patrons of local artists.

The terracotta figure of Ami Chand was produced approximately in 1819-20. The portrayal is closely linked to a portrait of Ami Chand, commissioned by William Fraser (in the collection of Prince Sadruddin Aga Khan) in May 1819. The inscription below the painting in William Fraser's hand reads: 'Ummee Chund the son of Oodey Ram by birth a Bath of vil. Gundana District Gohand province Hissar or Hurreeanah. The man who saved my life when an assassin cut me down by seizing him tho' unarmed himself. In his troop dress - done in May 1819.' Ami Chand saved Fraser by throwing an inkstand at the assassin. According to correspondence between the Fraser brothers, Ami Chand was employed by the Frasers for several years and featured in at least two portraits belonging to the brothers. A study of six recruits from the peasant castes Jat and Gujjar that lived on the outskirts of Delhi is featured below for comparison of the style of the uniform. 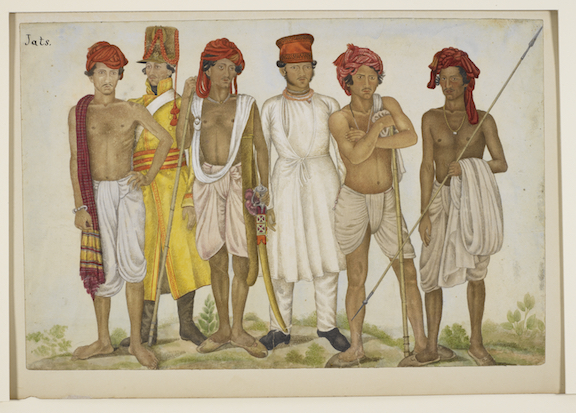 Ami Chand was not the only servant working for the Fraser brothers that was portrayed. In the David Collection in Copenhagen, there are two drawings featuring Kala, one showing him dressed in simply trousers and turban with no top based on his attire while out hunting and a second in full regimental attire of the irregular cavalry of Skinner's Horse.