The Burmese New Year falls in the second week of the Burmese month of Tagu (April). It is an auspicious time for Burmese people, who each year determine to make the New Year a happier, healthier and more successful one. The New Year is ushered in with the Thingyan water festival, which starts on 13 April and lasts for four days, after which comes New Year's Day itself. The word Thingyan is derived from the Sanskrit word Samkranti, which means literally ‘a passing on’, and the exact date and the precise time of the commencement and termination of Thingyan and New Year’s Day are fixed through astrological calculations. The first day of the festival is called Thingyan a-kyo nei (welcoming day), the second day is Thingyan a-kya nei (falling day) and the third day is Thingyan a-kyat nei (tight day). Certain years may contain one or two extra a-kyat days, and then the last day of the festival is Thingyan a-tet nei (rising day). The following day, 17 April, is celebrated as the Burmese New Year's Day. 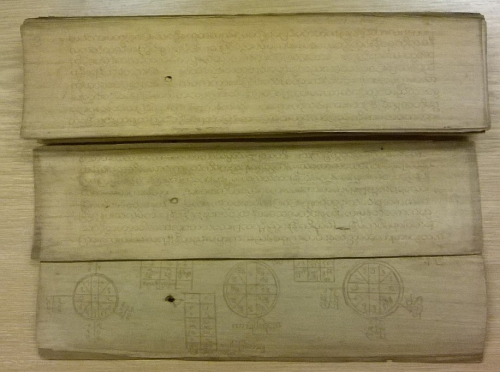 Shown above is a half-length Burmese palm leaf manuscript of Thingyan sa, which gives explanations of Thingyan with calculations. Thingyan sa are traditionally written annually at the time of the Thingyan festival, based on astrological calculations, and purport to predict the great events of the coming year.

The above illustration portrays royal people in a procession to celebrate Thingyan and New Year, attended by musicians. Some carry small water pots with flowers on their shoulders, some carry long fans and some wear masks resembling mythical animals. According to traditional beliefs, Sakka, king of the Tavatimsa heaven, descends to the earth from his celestial abode on a-kya day. People place a small pot with seven different kinds of flowers representing seven days of the week in front of their house to welcome Sakka. He remains upon earth for three days. During the festival people, regardless of age, gender or religion, wear colourful dresses and sing and dance together, sprinkling scented water on one another, in the belief that the Thingyan festival water will make them healthy. For fun, some people enjoy playing with water hoses at their temporary pavilions. 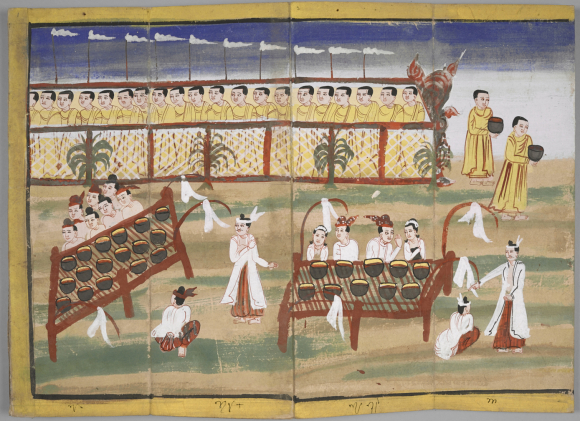 The above illustration shows an alms-giving ceremony. The practice of offering food to monks is the most common ritual practised in in Burma, and is a peaceful and spiritual ceremony. Indeed, the true spirit in which the New Year should be celebrated is by fasting, giving alms, doing meritorious deeds and observing the Buddha’s teachings (Dhamma) on New Year’s Day. Kadaw (Homage) day is held in this season. On this day, people pay their respects to their parents, teachers and superiors, and novitiation ceremonies are held in towns, cities and villages. 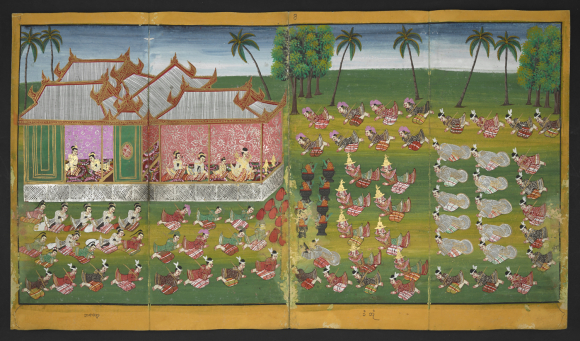 This painted scene depicts the ruler receiving homage from his ministers and court officials on Kadaw or Homage day. The king is seated in a pavilion and traditional offerings of coconuts and bananas are set before him. The bottom yellow border of the painting is inscribed in Burmese characters, ‘Receiving homage’. British Library, Or.14963, f. 7

In the scene above, the king is shown receiving homage from his ministers and members of the royal family. The ceremony features folk music troupes and processions of elephants and horses. During the days of royal rule, the New Year celebration included the state-sponsored feeding of monks for three continuous days, the watering of the sacred banyan trees and the cleansing of Buddha statues, and a three-gun salute was fired to usher in the New Year.

Posted by Annabel Gallop at 2:20 AM