Tracking down the earliest copy of Khvaju Kirmani's collected works: British Library Or. 11519

Our guest contributor today is Shiva Mihan of the University of Cambridge who recently completed her thesis Timurid Manuscript Production: The Scholarship and Aesthetics of Prince Bāysunghur’s Royal Atelier (1420–1435). 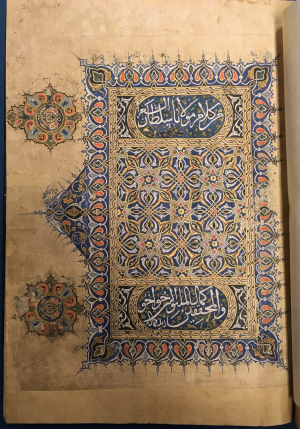 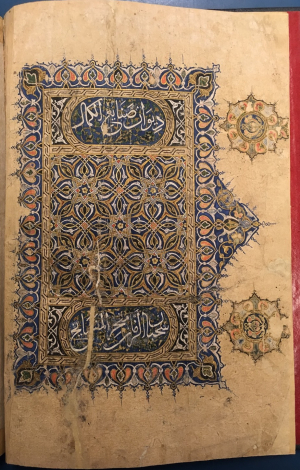 When I came across the following description of  British Library Persian manuscript Or. 11519 on page 63 of G.M. Meredith-Owens, Handlist of Persian Manuscripts 1895-1966, my interest was piqued:

At the time, I was writing up my doctoral research into 15th century Persian book production under the patronage of Prince Baysunghur in his atelier in Herat, modern day Afghanistan. I was therefore familiar with the most complete early manuscript of the works of Khvājū Kirmānī (died c.1352), Tehran Malek 5963[1], which was almost certainly produced under Baysunghur. The scribe of this manuscript, which is dated 1426, was Muḥammad b. Muṭahhar, a senior scribe in Bāysunghur’s atelier, who had copied other important manuscripts for him. The manuscript Malek 5963, is an exquisite example of Timurid royal book production, now sadly slightly defective at the beginning and the end. 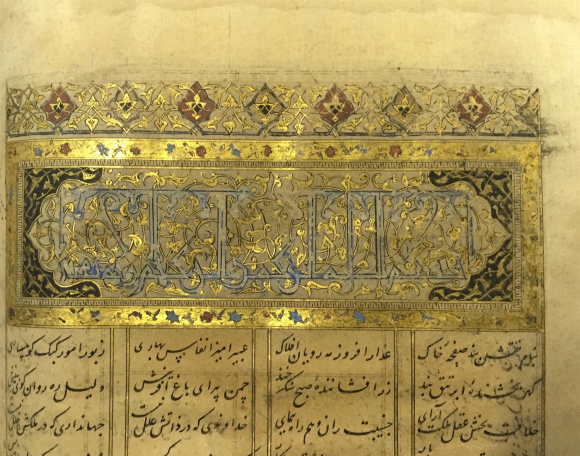 The beginning of Gul u Nawrūz, from the Kullīyāt of Khvājū Kirmānī (Malek 5963, p. 811) By permission of the Malek National Library In order to verify the completeness of the Baysunghuri manuscript, bar the minor losses at start and end, I had compared its contents to the oldest known Khvājū Kirmānī manuscript, now housed in the same library, Malek 5980. That manuscript was copied during the poet’s lifetime, in 750/1349, by another accomplished scribe, Muḥammad b. ʿImrān al-Kirmānī. It too is very beautifully illuminated, and was very likely the presentation copy for the poet’s patron, the vizier Tāj al-Dīn Aḥmad who had commissioned the collection. 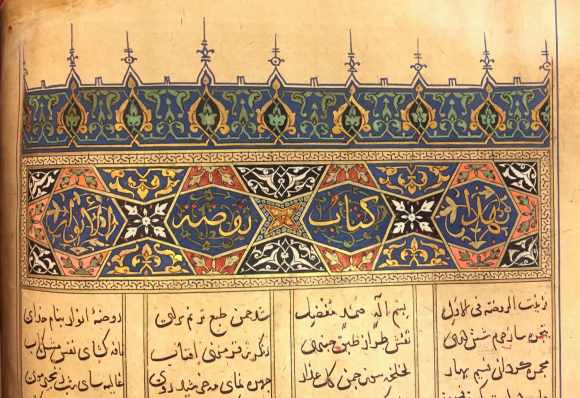 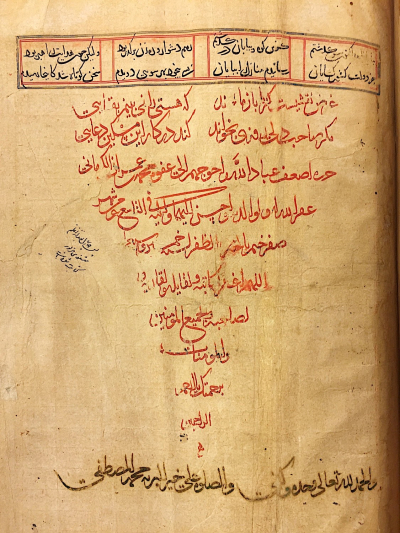 Malek 5980 is thought to be the oldest extant manuscript by some 50 years. Khvājū Kirmānī is highly regarded in Iran to this day, and in 2013 a facsimile edition of Malek 5980 was produced by the University of Kerman in 2013 (see Further reading).

So, with this background, the reader might well imagine the excitement when the good people of the British Library delivered Ms. Or. 11519 to me in the Reading Room. On opening up the manuscript, I was confronted by a beautiful illuminated double-page frontispiece and a few folios later a magnificent double-page heading (sarlawḥ). 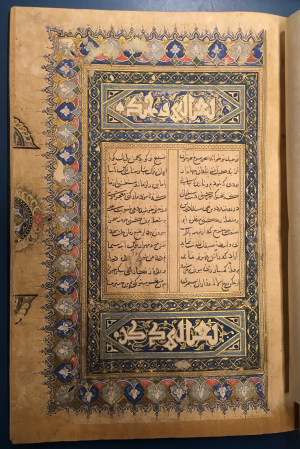 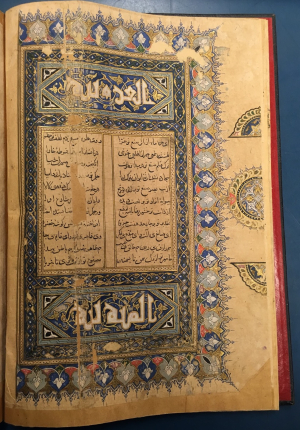 Straightaway, it was clear to me that the catalogue had been in error – this was not the work of the 15th, but of the 14th century. But the hand, a beautiful Persian script (a combination of taʿlīq and naskh) seemed strangely familiar to me. When I read the colophon I was amazed to find that although it was undated, the scribe named himself as Muḥammad b. ʿImrān. No wonder I recognized the hand. There was no doubt in my mind: this manuscript must date to the mid-14th century, around the time the same scribe had copied the oldest known manuscript, Malek 5980, in 1349. As with the Malek manuscript, when Or. 11519 was copied, the poet himself was still alive.

To what was Glyn Meredith-Owens referring when he said “apparently once part of a majmuʿeh [collection] of 500 folios”? There is a note in Turkish on the first folio, which says something to this effect (where the number, I believe, is not 500, but 580). Could Or. 11519 (66 folios) and Malek 5980 (352 folios) have once been part of a single manuscript? If so, were there other parts remaining to be discovered? These seemed intriguing possibilities. 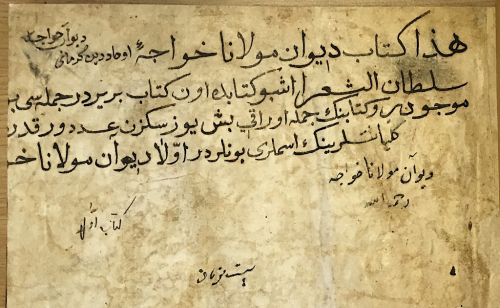 The similarity of the illuminations and the common scribe were very suggestive. It remained for me to study the text of the BL manuscript in more detail. Ursula Sims-Williams, Lead Curator of the Persian collections, very kindly sent me photographs to enable this. I laboriously tracked down every poem by comparing the manuscript to the edition of Suhayli Khwansari (1336 shamsi/1957) and to other early manuscripts, using images kindly provided by librarians in Iran. Those other early manuscripts of the Kullīyāt of Khvājū Kirmānī were:

The valuable Jalayirid manuscript of the recently digitised BL Add.18113, dated 798/1396, is older than the above copies (see earlier posts  An illustrated 14th century Khamsah by Khvaju Kirmani and The archaeology of a manuscript: the Khamsah of Khvaju Kirmani), but since it only contains three mathnavis, it was of little use in this comparative analysis.

As a result of my analysis, I can now say with confidence that there is no overlap in content between Or.  11519 and Muhammad b. ‘Imrān’s other Khvājū manuscript, Malek 5980. Putting all the evidence together, although Malek 5980 was previously thought to be a complete manuscript, in fact, BL Or. 11519 almost certain formed the first part of it. As such, despite the unfortunate inaccuracy in the catalogue, Or. 11519 presents a very good claim to being the earliest complete extant manuscript of Khvājū Kirmānī’s poetry. It is an unsuspected treasure of the Persian collection and a great gift for devotees of Khvājū Kirmānī.

Recalling the note in Turkish at the beginning of Or. 11519 stating that the original manuscript contained 580 folios, I was determined to do what I could to track down other missing parts, with a view to reconstructing the complete works of Khvājū in its original form. My initial investigations threw up to two strong candidates and another outside possibility. Firstly, a manuscript in the Konya Mevlana Museum, no. 140, was catalogued as 748 AH. Secondly, a Dīvān of Khvājū Kirmānī was said to be in the hand of our scribe, Muḥammad b. ‘Imrān, but was catalogued as a work of the 13th/19th century, in Mashhad, Astan Qods Library, no. 4650. With the help of colleagues in Turkey and in Iran I was able to study digital images of both manuscripts. As it turned out, neither was a part of the original Khvājū manuscript: the first had mistaken the date of composition for the date of copying, and the second proved to be a literal copy, including the colophon, of Malek 5980.

The third manuscript on my list, the outside chance, I had found catalogued as Khvājū’s Mafātiḥ al-qulūb in Tehran University Central Library, no. 2043, dated 705/1305, and penned by Muḥammad b. ʿUmar, 44 folios. The date had to be wrong, so why not the scribe’s name? More excitement was in store. When, thanks to the generosity of the Director, I was able to examine the manuscript first hand in Tehran University Library, I immediately recognised it was yet another part of the puzzle: here again was the same handwriting and the same style of illumination, the same paper, folio size, layout, rulings, ink, and headings. 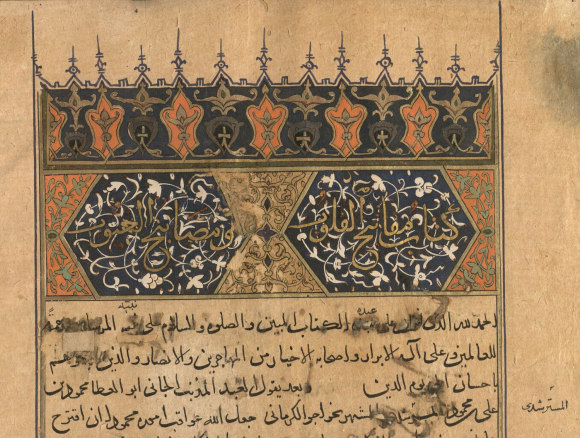 Tehran University 2043 is incomplete at the end and so has no colophon. However, a note at the beginning of the manuscript in a similar hand to that of the scribe, provides the title of the work and the name of the scribe, Muḥammad b. ‘Imrān (not ʿUmar), as well as the year, 750 (not 705)/1349. Other notes on the same folio tell us that the manuscript was once owned by Luṭf ‘Alī b. Muḥammad Kāẓim in 1343/1924. 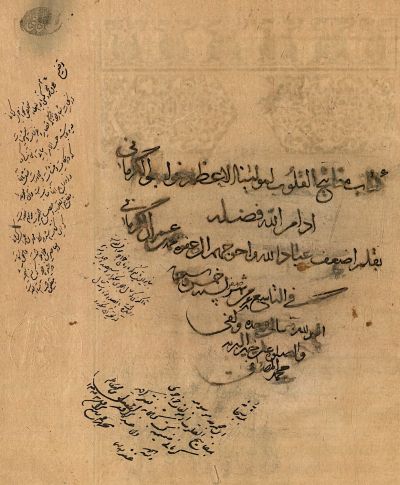 Luṭf ‘Alī b. Muḥammad Kāẓim (1857-1931), known as Ṣadr al-Afāz̤il, was a prominent scholar and calligrapher as well as a collector of Islamic manuscripts, in a line of such men (the Nasīrī-Amīnīs)[2]. A close examination of the Tehran University manuscript convinced me that the scribe’s signature (f. 1r) was not in the hand of Muḥammad b. ‘Imrān, but was a skilful forgery. The similarities with the authentic colophons of BL Or. 11519 and in Malek 5980 suggest that whoever forged this note had seen one or both of the other colophons. Yet another note, at the beginning of Malek 5980, signed by Ṣadr al-Afāz̤il, states his ownership of that manuscript also in 1339/1920. The BL manuscript was presented to the British Museum by R.S. Greenshields in 1934. Of course these could all be coincidences, but the signs are that the original Kullīyāt (of 580 folios?) – containing what would become BL Or. 11519, Malek 5980, and Tehran University 2043, and perhaps other fragments, yet to be discovered – was divided up between 1920 and 1934.

As stated above, I have compared the three parts of the original manuscript to numerous later ones (all pre-1440). The results have been both interesting and complicated. The poetic content of BL Or. 11519 is found in each of the four manuscripts I listed above. In Tehran University 5154 that content is faithfully reproduced; however, in the other three manuscripts, extra poems appear in this section, drawn from the first section of Malek 5980, but the redistribution of poems is different in each case. Surely, BL-Malek-Tehran University should now be regarded as the core corpus against which later reorganisations and additions are assessed, and much work by Khvājū Kirmānī scholars remains to be done in this area. To facilitate such work, and to satisfy a demand for reproductions of high quality illuminated manuscripts from the period, it is intended that a facsimile of the BL and Tehran University manuscripts be published to complement the University of Kerman’s Malek facsimile of 2013. The complexities of my textual comparisons will be provided in the introduction to the facsimile.

[2] For more on faked manuscript interventions and the part played by Ṣadr al-Afāz̤il and his family, see F. Richard, “FORGERIES iv. OF ISLAMIC MANUSCRIPTS” and A. Soudavar, Reassessing Early Safavid Art and History, pp. 85-9.

Posted by Ursula Sims-Williams at 11:51 AM