Only two known Malay manuscripts in the British Library relate to Christianity, and they represent very different periods in the spread of the faith in Southeast Asia. One is a compilation of hymns, psalms and Christian services, written in Maluku in the 17th century, at a time when all aspects of Calvinist church activities were firmly controlled by the Dutch East India Company, the VOC. Church ministers were all VOC employees, and hence Protestantism was termed Agama Kumpeni, ‘the Company Religion’, to differentiate it from Catholicism.  The second manuscript is a Malay account of a conversion to Christianity in Singapore in the early 19th century, a period when Christian missionary work took place essentially outside the government orbit.

The island of Ambon in the Moluccas, from Oud en Nieuw Oost-Indiën by François Valentyn, 1724-1725.  Source: Atlast of Mutual Heritage, Wikimedia Commons.

The 17th-century book (Sloane 3115) is one of the oldest Malay manuscripts in the British Library, as it was in the collection of Sir Hans Sloane, founding father of the British Museum and its Library. An inscription in Dutch on the first page states that this book belonged to Cornelius van der Sluijs (Sluys) who in the year 1672 sailed on the ship ‘The Coat of Arms of Alkmaar’ ('t Wapen van Alkmaar) to the East Indies, as a church comforter of the sick (krankbezoeker).

According to notes kindly provided by Th. van den End, Cornelius van der Sluijs was born ca. 1648 at Sluis, in the Dutch part of Flanders. He matriculated in 1665 in the theological faculty at Utrecht and sailed to the Indies, and in July 1673 was posted to Ambon where he was immediately appointed ‘proponent’ minister, giving him a licence to compose his own sermons, but not to administer the sacraments. On 10 April 1678 Van der Sluijs took his final church exams, at last becoming a minister with full rights, and served in this capactity with the church in Ambon until 1684. From 1684 to 1690 he held the same position in Ternate, and from 1690 to 1697 in Batavia. He then spent five years back in the Netherlands, but in 1702 was again in Batavia, where he died in 1715. 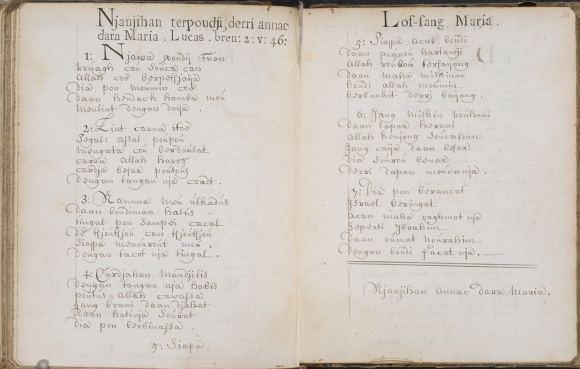 Van der Sluijs was well known for his knowledge of Malay, and during his final years in Batavia he worked on revising the Bible translation of Leydecker and Van der Vorm. However he is not personally recorded as having submitted translations to the church council in Ambon or Batavia, and so the Malay hymns in this volume are unlikely to be his own work. Van den End indeed suggests that discernible Portuguese influence in the vocabulary points towards a much earlier date of translation, perhaps from the first half of the 17th century, indicating that the contents of this volume were probably copied from existing manuscript or printed sources. It is most likely that the manuscript was compiled to mark the important occasion of Van der Sluijs' appointment as a full minister in Ambon in 1678, making him not only the leader of his own church, but also the third highest official in the local VOC hierarchy.

The hierarchical, state-sanctioned circles of 17th-century churchmen in Indonesia were very different from the missionary world of the Straits Settlements in the early 19th century. Judged by its impact on the fields of education and printing, the Christian mission among Malays in the Malay peninsula and Singapore was of enormous significance, but from the perspective of its primary aim, namely the conversion of souls, success was much more limited. Thus a small manuscript of four pages in the British Library (Or. 4942, f. 229)  is of some interest as a rare autobiographical account in Malay of a conversion to Christianity. Nothing is known of the provenance of this item, although it was written before 1888 (the date of its acquisition by the British Museum). The author lived in Kampung Boyan in Singapore, the settlement of people from Bawean island, off the north coast of Java, which suggests a date of composition after the 1840s, when migration to Singapore from Bawean increased markedly. 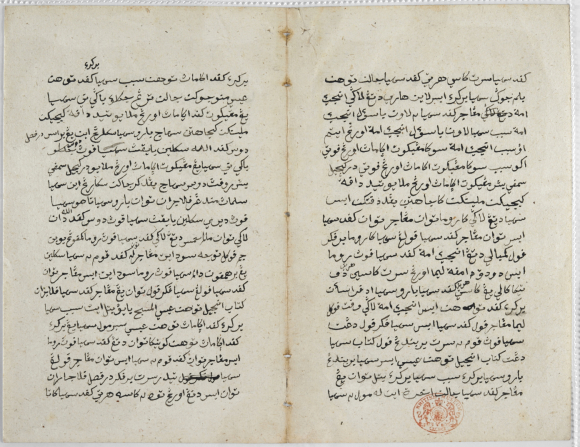 This account was clearly written by the convert at the behest of an unnamed missionary. The anonymous author, simply referred to as sahaya, 'I', recounts how he first met the missionary, only called Tuan, 'Sir', and how he listened to his preaching, but then returned home, unmoved by the message. This scenario occurs several times:

Lain hari datang pula ka ruma tuan mengajar kepada sahaya, abis mengajar tuan kepada sahaya, pulang sahaya sampai ka ruma berpikir pula, serta sahaya berbandingkan dengan sahaya punya kitab Melayu, mana yang betul kitab Melayu dengan kitab Injil tuhan Isa, suda itu sahaya abis berpikir serta berbanding agama orang itam dengan puti, belum juga sahaya bergerak.
'Another day I came again to your house when you were teaching, after which I returned home and thought about it, and I compared the teachings with my own books in Malay, and pondered as to which were true, the Malay books or the Gospel of Lord Jesus, and then I thought and compared the religion of the dark-skinned people with the white man’s religion, but I was still not moved.'

Finally, through the intercession of Encik Amat, a Malay who had been Christian since birth or at least since childhood, and who was thus able to act as interlocuter with ‘dark skinned people’ for the ‘white man’s religion’, sahaya is convinced, and is converted.

Sahaya is no Munsyi Abdullah, the great contemporaneous Malay writer, printer, teacher and associate of Singapore missionaries: as can be seen above, his literary style is ponderous and repetitive, with certain orthographic characteristics such as the consistent dropping of ha both initially (abis for habis, itam for hitam) and at the end of words (suda for sudah, ruma for rumah).  One interesting choice of vocabulary, which  occurs ten times in this short text, is the term bergerak, a verb meaning literally 'to move'. As in the extract above, bergerak is used here to signify a stirring of emotion or inclination, reflecting the extent of the impact of the Christian message upon sahaya, and is ultimately also used to mean moved spiritually to the extent of conversion. Another notable linguistic feature of this account is that although it is implied that the writer was originally Muslim – he talks about agama orang Melayu, 'the religion of the Malays' – nowhere is the word Islam mentioned, suggesting a deeply-held and respectful reticence, and perhaps inviting a deeper dissection of the text. The full text and English translation of this account can be read here.

With many thanks to Th. van den End for his notes on Cornelius van der Sluis (personal communication, 2 October 2015).

Posted by Annabel Gallop at 5:44 PM