In traditional Vietnamese society people were divided into four classes, similar to those found in Chinese and other East Asian Confucian societies. The tứ dân, or four social hierarchical classes, were scholars (sĩ), farmers (nông), craftsmen (công) and merchants (thương).

At the top of the social hierarchy were the scholars or intellectuals, who led relatively comfortable lives in respected occupations such as doctors, mandarins and teachers. Commoners who were not born into this class but wanted to climb the social ladder to enter it were able to do so by studying very hard and sitting civil service examinations, supported financially by their own families. If they were successful, they brought great honour upon themselves and their families, and even their villages, and they might be welcomed back to their villages with parties paid for by their neighbours (Woodside: 1981, p.170). The royal court would award them special costumes which distinguished them from common folk, and they could even be appointed as local mandarins. 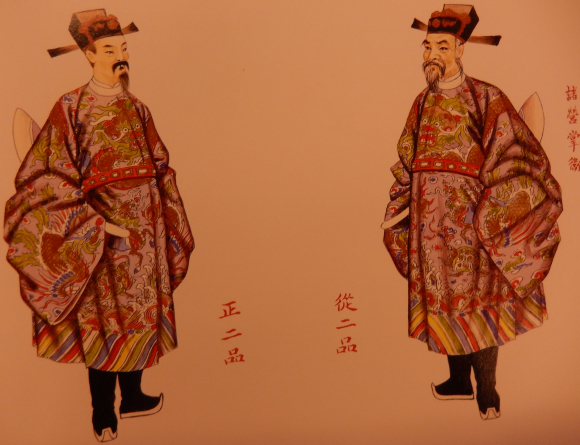 Vietnamese mandarins, both civil and military, were divided into nine grades and each grade was further subdivided into senior and junior levels. High ranking mandarins were distinguished by their official robes in purple or red, colours reserved for their class, while lower ranking officials wore blue robes. Commoners could only wear black, brown or white dyed costumes, as Harry A. Franck, an American travel writer, observed in Tonkin in 1923: “the Tonkinese were dressed in a cinnamon or tobacco-juice colour that suddenly became as universal as black had been further south … the country women, then their men, and finally all the hand-labouring class, took to wearing long cotton cloaks of this reddish brown hue” (Franck 1926: 191). 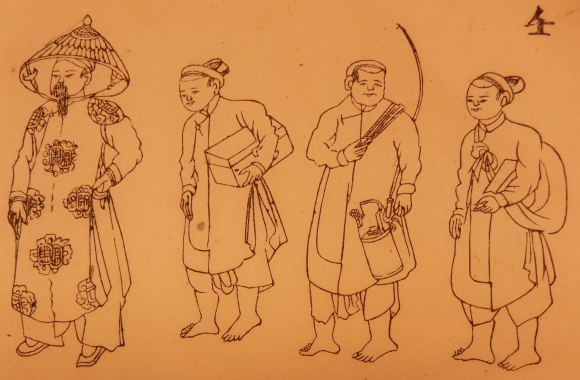 A mandarin accompanied by his servants; only the mandarin wears shoes. Oger [1909]: f. 4. British Library, Or. TC 4

Below the class of scholars was the largest social grouping in Vietnamese society: farmers, primarily rice farmers, who could be further sub-divided into three different groups according to land ownership: trung nông, bần nông and cố nông. Trung nông were farmers who owned land and farming tools. This was the most well-off group economically and socially, as they could produce enough rice or other agricultural products to support themselves, and therefore did not have to labour for the state in lieu of taxation. Bần nông were farmers who owned a small amount of land, albeit not large enough to yield sufficient rice to support their families. They therefore had to work on land belonging to landlords, and also had to rent their farming tools. Cố nông or tenants were farmers who owned no land or farming tools at all and had to till the land for landlords to earn their living. They were the poorest people in the society and were frequently subject to exploitation.

The third class was craftsmen, whose numbers were relatively small compared to farmers. Some were actually farmers who had developed skills in crafts such as carpentry, weaving or blacksmithing. At the village level their scale of production was very small and did not have significant economic impact, but in larger towns they formed their own guilds to protect their interests and to support each other. Those who were highly skilled could be recruited to work for the court, but the court did not support them to develop their production into an industrial scale.

At the bottom of the social hieracy were merchants. From a modern perspective it may come as a surprise to find that in a traditional self-sufficient economy merchants actually played a very insignificant role, since farmers were able to produce most of their daily necessities and could barter goods with each other, rather than relying on tradesmen. Traditional Confucian society also disapproved of the mercantile practice of “buying cheap, selling dear”. 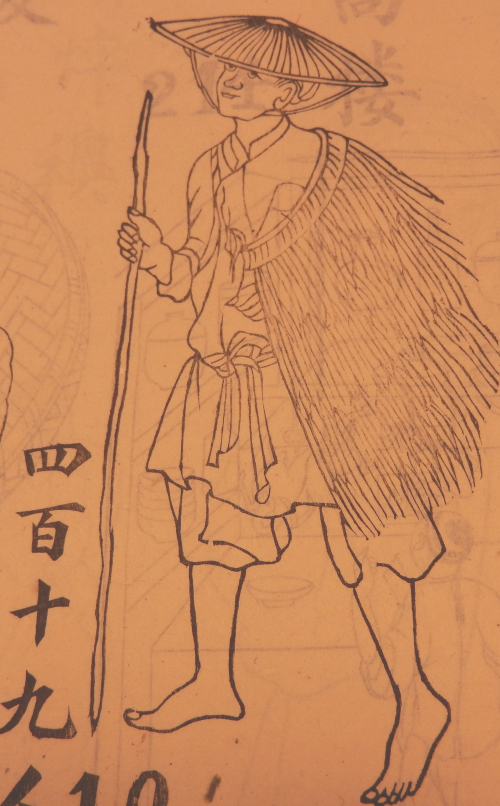 Towards the end of the 19th century, Vietnamese hierachical society was still very much intact. Even though French colonial rule brought about some social and economic changes, these were not powerful enough to uproot entirely the traditional system of four social classes. Newly emerging social groups, such as the French-educated literati or colonial employees, still fitted into the scholar class (sĩ) despite the different ideological basis. The number of poor farmers and landless peasants increased, and their plight may even have been exacerbated through colonial land ownership and tax policies. Traditionally, Vietnamese women wore both skirts and trousers. In the 17th century Emperor Lê Hyuền Tông issued a decree forbidding women to wear trousers, but this decision was reversed during the reign of Emperor Minh Mang (r.1820-1841) who instead forbade the wearing of skirts (Ngô Đức Thịnh 2009: 2). In the 1820s, George Finlayson wrote of the Vietnamese: “…though living not only in a mild, but warm climate, the partiality for dress is universal. There is no one, however mean, but is clothed at least from head to the knee, and if their dress is not always of the smartest, it is owing more to their poverty than to their want of taste … the principal and most expensive article in their dress is the turban ... A loose jacket, somewhat resembling a large shirt, but with wide sleeves, reaching nearly to the knee, and buttoning on the right side, constitutes the principal covering of the body. Two of these, the under one of the white silk, are generally worn, and they increase the number according to their circumstances and the state of the weather. Women wear a dress but little different from this, though lighter, and both wear a pair of wide pantaloons, of various colours. The dress of the poorer class is made of coarse cotton, but this not very common, coarse silks being more in vogue. Those of China or Tonquin are worn by the more opulent classes. Shoes are also worn only by the wealthy, and of Chinese manufacture, clogs, in fact, rather than shoes” (Finlayson 1988: 378-9).

A Vietnamese gentleman wearing a western-style cap rather than a traditional turban. Oger [1909]: f. 32. British Library, Or. TC 4

Almost a century after Finlayson’s account, almost no major changes in the costumes of Vietnamese commoners could be observed. Henri Oger’s pictorial records of daily life in and around Hanoi at the turn of the nineteenth century illustrate the slow rate of change in social class in this French colony. One might argue that some changes in fashion can be noticed reflecting western influence, but these mainly affect the elite and wealthy classes. As for the poor, Oger’s drawings suggest that they barely benefitted from the social and economic changes brought about by the new ruler.

Harry A. Franck reports on the clothing of the period: “Among the coolie class these overcoats of both sexes were of thin cotton. The well-to-do men in towns and in autobuses wore jet-black ones, thin as gauze … with flowered designs of the same hue woven in them, … and fastened together down the side with little gold buttons … A black cloth carelessly wound about the head distinguished most coolies, but all men above that class wore the most unique item of the Annamese costume, a black band-turban permanently arranged in many little folds … At least along this main route of the French railway and autobus highway both men and women of the well-to-do class wore gold and other valuable ornaments openly. Long necklaces of grains of gold of the size of peas are the favourite adornment”(Franck 1926: 106). 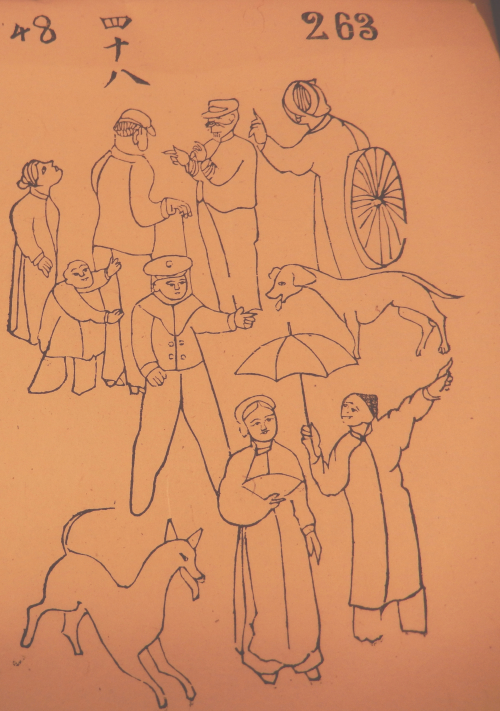