From the Page Up: The Peking Gazette and the Histories of Everyday Print in East Asia (1)

Today we  welcome back guest blogger Emily Mokros, Assistant Professor of History at the University of Kentucky and Postdoctoral Fellow at the Center for Chinese Studies, University of California, Berkeley. This is the first of two posts on printing and moveable type in East Asia. 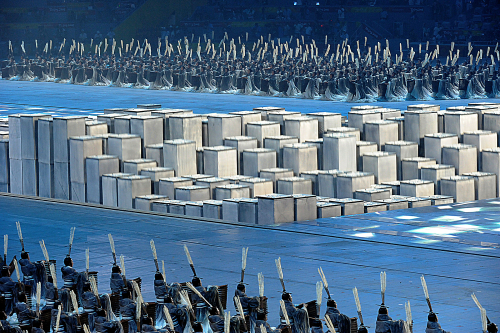 In 2008, the Beijing Olympics opened with a demonstration of four great inventions from China’s long history: the compass, gunpowder, paper, and printing. In particular, you might remember the dramatic representation of movable type: 897 performers manipulated movable type blocks representing the character he (harmony) in a series of historical script styles. The display spoke to the important role that this innovation played in Chinese, and indeed world, history. Readers with a knowledge of Chinese book history, however, are probably more familiar with books printed with solid woodblocks rather than movable type.

The British Library is home to a significant collection of texts printed using wooden movable type – this is the Peking Gazette collection. The Peking Gazette was a periodical record of government communications for the Qing dynasty (1644-1911) in China. The British Library collection includes a wide variety of editions from the nineteenth century. In my last post I described the significance of the Peking Gazette as a source for understanding the political and diplomatic history of China in the nineteenth century. In this, the first of two posts, I’ll highlight the ways these material sources shed light on little known aspects of the history of print in China. Peking Gazettes contain valuable clues as to the everyday applications of wooden movable type, the diversity of premodern print techniques employed by urban publishers, and even the routes by which print and paper were made, bought, and distributed in Qing China and maritime East Asia.

Xylography, or printing from wood, enabled a vibrant print culture to emerge in premodern Chinese empires. The fine detail of the British Library’s Diamond Sutra from AD 868, the oldest dated woodblock print example, makes it clear that woodblock carving and printing techniques were already very sophisticated in the Tang Dynasty (618-907). In later centuries, woodblock printed books became increasingly common, especially after an explosion of commercial publishing activity in the sixteenth and seventeenth centuries. To print books from woodblocks, manuscript pages were commonly laid onto prepared blocks of hardwood, on which a block-cutter carved the text, columns, and other features in relief. After carving, a printer applied ink to the block, laid paper on the surface, and pounded the paper evenly with a special brush, producing an imprint. Depending on the quality of the block, thousands of imprints could be taken from a single woodblock before it required repair. The flexibility of this technology was a key factor in the flourishing book culture of early modern China. 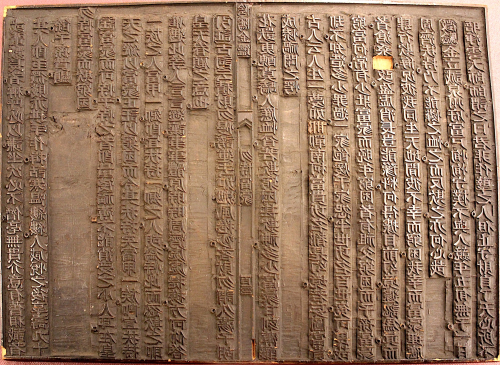 The woodblock is darkened by the use of black ink for printing. On the upper right side, the original colour of the wood is visible in a hole made for replacing a character (British Library Or. 14251)

Despite its apparent rarity, movable type came into use quite early in the history of print in East Asia. In the eleventh century, the polymath scholar Shen Kuo wrote of a contemporary named Bi Sheng, who had invented an ingenious method of using fired clay to form movable types (huo zi 活字) for printing. According to Shen, Bi laid the clay type into a frame, the bottom of which had been painted with a mixture of ash and wax. After laying the type, the bottom of the frame was heated to fix the type in place, allowing the printing process to proceed in the same way as in traditional xylography. According to surviving descriptions, movable types of fired clay, wood, and metal (predominantly copper) were used in succeeding centuries to print both Chinese and non-Chinese script. Such editions are extremely rare today.

Today, the most prevalent examples of premodern wooden movable type printing in China come from two commercial enterprises: the printing of lineage genealogies, and of government gazettes. In genealogical printing, traveling printers carried a type supply and carved new types on a per-job basis. By contrast, gazette printing took place in cities, typically adjacent to government offices or the examination yards. Still, on the level of texts, these two seemingly disparate industries shared some important qualities. Both used a limited subset of the vast corpus of characters in the Chinese written language. Genealogies used a fairly circumscribed vocabulary, focusing on names, generational and familial terms (which could be recycled between jobs); gazettes contained summaries of official correspondence and employed the constrained vocabulary of bureaucratic language. In both cases, the producers did not have any use for retaining stores of carved woodblocks—instead, they wanted to produce a fixed and limited set of copies on a quick basis. In addition, while block-cutting labor was growing increasingly cheaper in early modern China, natural resources were limited. In particular, the durable and large-format hardwoods used for woodblock printing grew increasingly rare with the pressures of population expansion, urbanization, and wartime destruction. By using movable types, often carved from relatively soft woods, printers minimized their expenses. As a result, gazettes were cheaply available in urban markets. These gazettes exhibit the visual markers of movable type printing. A low “shoulder” on carved wooden types allows us to see the imprint of square borders around characters. The occasional mistake in type-setting resulted in a flipped character. Most types were of individual characters, but printers also produced “double characters,” that held common two-character combinations. Daily gazettes typically numbered about ten leaves of paper (thus twenty pages), each containing up to seven columns of text. However, movable-type techniques freed the printer to create a wider page if needed. In the case of a long memorial, printers could fill a wider page and simply fold the page within the gazette.

Beijing, as the seat of the imperial government, was naturally the main hub for gazette publishing. At least ten publishers operated in late Qing (1860-1911) Beijing, clustering in the southern commercial districts of the city, close to Liulichang, Beijing’s lively market for books and antiques. Together, the publishers produced between one and two thousand gazettes per day. Of these, about two hundred were carried by government couriers to officeholders around the empire, but the majority were sold to capital residents. Rutherford Alcock (1809-1897) called this district “the Paternoster Row of the capital” (Alcock, p. 252), in reference to London’s news district, and described the cabinets of wooden type that lined the walls of the shops in a widely reprinted account in the English periodical press. Wang Zhonglin (1818-1878), a Chinese minor official, once wrote in his diary about an idle afternoon spent watching printers “hunting for characters to fill their blocks.”[1] 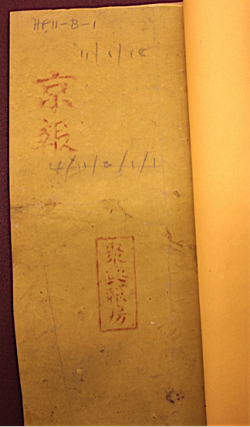 The publishers typically included their shop names on an opening page or the issue cover. The names of some of these publishers and these names attest to the use of movable types (as in juxing 聚興 “assembled prosperity,” in which the use of the character ju 聚 often refers to assembled types); more commonly they simply summoned auspicious themes, with recurring terms as in the recurrence of terms like “prosperity,” (xing 興) “advance,” (sheng 升), and “success” (cheng 成).

In my next post I'll be writing about some provincial gazettes published outside the capital.