From the Page Up: The Peking Gazette and the Histories of Everyday Print in East Asia (2)

A follow up on the history of printing in China by guest blogger Emily Mokros, Assistant Professor of History at the University of Kentucky and Postdoctoral Fellow at the Center for Chinese Studies, University of California, Berkeley.

One of the highlights of the British Library collection is that it includes many examples of gazettes published outside of Beijing. At provincial capitals, gazette publishers typically used capital editions supplied by couriers to reprint runs of the gazette on local paper. Before the Treaty of Tianjin in 1858, which allowed representatives of Western countries access to the imperial capital, most British trade and diplomatic activity happened in port cities, especially Guangzhou (Canton) and the treaty ports that had been opened in 1842. For this reason, many of the British Library Peking Gazettes dating to earlier than 1860 are in fact reprints, mainly originating from Canton and Suzhou, a city not far from Shanghai. Provincial reprints are not identical to their capital cousins, and they have much to tell us about the material culture of publishing in nineteenth-century China. Most Suzhou reprints appeared in pamphlets of a standard size, typically eight columns in width and twenty columns in length. These were roughly the same proportions as a compact book. This format may have appealed to subscribers who obtained gazettes in monthly packets (and thus easily bound into a book format), rather than the daily pamphlets available in the capital.

Canton reprints and manuscript editions evoke the commercial networks that supported print culture in South China and maritime Southeast Asia. Canton was a major urban market for the rural papermaking enterprises located in hinterland Guangdong and especially in its provincial neighbor, Fujian. In Canton, paper firms (zhihang 紙行) controlled by natives of nearby Foshan sold a wide range of paper products transported by waterways from the mountainous interior. Through the entrepreneurship of Foshan merchants, southern paper was sold and used throughout the Qing Empire. Both papermakers and these intermediate suppliers often left their mark on the page, in the form of stamps that served advertising and branding purposes, and some gazettes bear theses stamps.

The print quality of these reprints is strikingly different from the movable type editions produced in Beijing later in the 19th century. By contrast with the fairly wobbly columns of movable type in the Beijing editions, the columns of Suzhou reprints are far more uniform. There are still markers of individual types (see the last three characters of the second column from the right on the below page, where the borders of the individual characters are clearly visible). On the whole, this page – and other Suzhou reprints – exhibits a smudgy quality, which suggests that local gazette publishers went about the printing process in a different manner than their capital counterparts, in ways that we still do not fully understand. One working hypothesis is that they may have used an intermediate medium, perhaps a wax mixture, to create a stereotype as the basis for an imprint, rather than printing directly from the assembled wooden blocks. 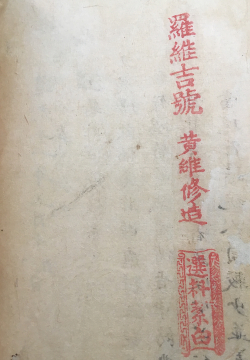 The stamps that I found on gazettes in the British Library collection include the name of the craftsman or brand, and advertise the quality and characteristics of the paper. While many book publishers likely trimmed off the margins and stamps, gazette purveyors were evidently less discerning. Notably, all of the stamped gazettes are manuscript editions, and may have been copied by scribes on paper purchased separately from paper suppliers.

Another tiny stamp, this one found on an 1849 gazette reprint tells that it was sold from the Jinyu lu shop (金裕祿全堂), located on Datang street. Datang street was the site of the local administrative offices and civil examination yards, and was therefore the center of government life in Canton. Both local administration and the imperial examinations were important markets for local printers and paper suppliers. 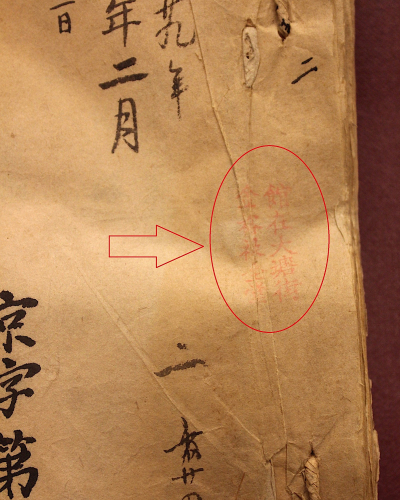 The port city of Canton served as the hub of a maritime trade in paper that extended far beyond its shores. The paper trade left its marks on the city streets. Even today, there is a ‘Paper Merchants’ Street’ (zhihang lu 紙行路) in central Guangzhou. The antecedent of this street can be found on 19th century maps of the city, as seen below. A previous contribution to this blog, Malay Manuscripts on Chinese Paper (February 2014), describes the seal of a Chinese paper supplier, based outside the Taiping Gate in Canton (not far from that street), found on a Javanese manuscript from the early 19th century. Chinese merchant seals have also been found on texts in the Philippines and Japan (see examples collected by Devin Fitzgerald and Guillermo Ruiz-Stovel, highlighted in Devin Fitzgerald’s blog entry). 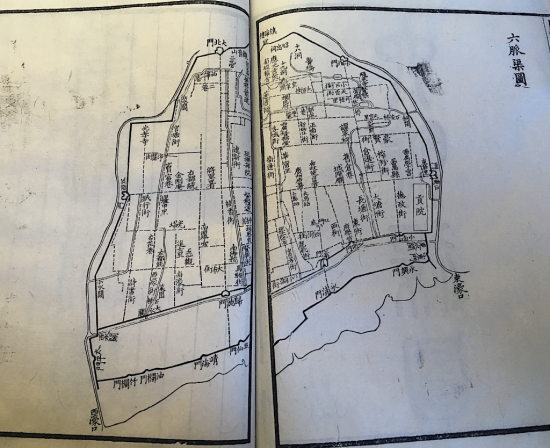 Details like flipped and smudgy characters and incidental stamps may seem like trivial matters in the history of Chinese print culture, and indeed in the history of the Peking Gazette. However, our knowledge of Chinese book history is so dominated by elite tastes and collecting practices that these elements of commercial production and exchange remain virtually unknown. These fragmentary impressions on the page are hints at a complex history that encompassed a larger variety of materials, techniques, and geographical spaces than we previously thought possible.