Sultan Baybars’ Qur’an is one of the most magnificent Qur’ans in the British Library. This seven-volume Qur’an produced in Cairo between 704-5 AH/1304-6 AD is the earliest dated Qur’an of the Mamluk period. 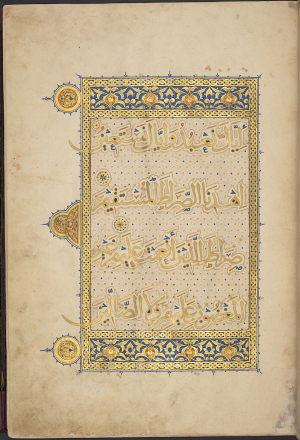 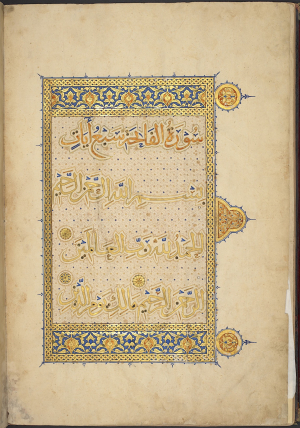 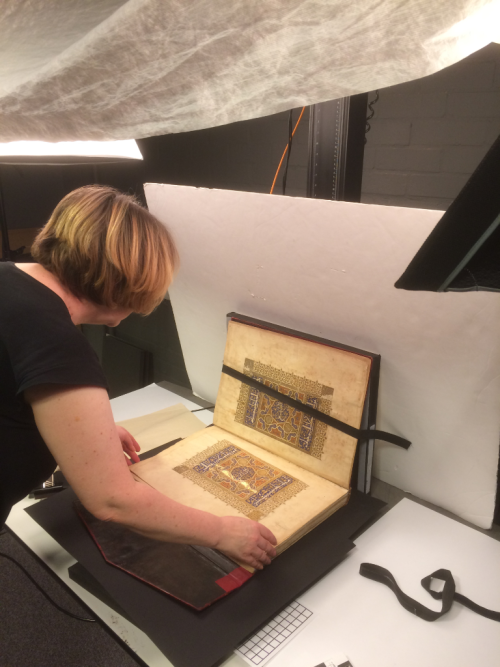 Sultan Baybars’ Qur’an was commissioned by Rukn al-Din Baybars al-Jashnagir, who at that time was a high-ranking official in the court of Nasir Muhammad. Only later, between 1309 and 1310, did he acquire the title al-Muzaffar Baybars, or Sultan Baybars II. 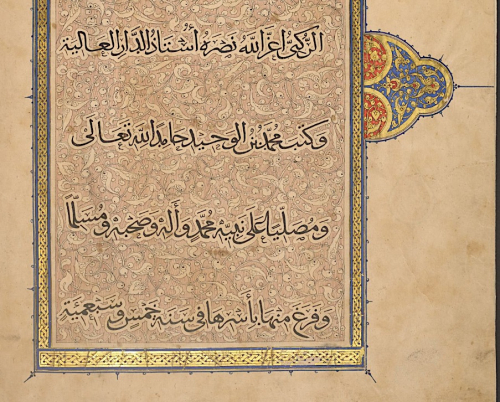 Though the Arabic historical sources make reference to this Qur’an, the purpose of Sultan Baybarsʼ patronage is unclear. It is not known whether the Qur’an was intended either as a pious gift to the mosque of al-Hakim in Cairo (built 990-1013), for whose restoration he was responsible after it was severely damaged by an earthquake in 1303, or as a donation to the building of a religious foundation. The subsequent history of the Qur’an is rather vague, but it was purchased by the British Museum from the antiquarian booksellers T & W Boone on 12 June 1858. 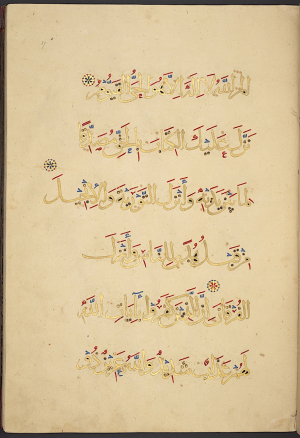 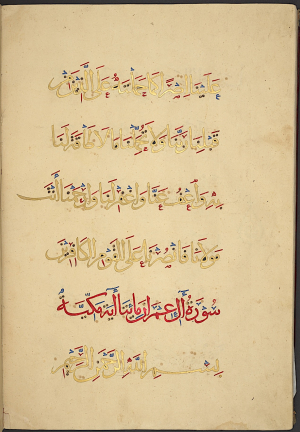 The physical size of this Qur’an, measuring 47.5 x 32 cm., enabled the calligrapher, Muhammad ibn al-Wahid, together with a team of three illuminators, Muhammad ibn Mubadir, Abu Bakr Sandal and Aydughdi ibn ‘Abdallah, to work not only with a large script and extensive decoration but also within a spacious page layout. Its 1,094 folios (2,188 pages) written in gold thuluth script spread over seven volumes give an indication of its monumental stature.

The calligrapher Muhammad ibn al-Wahid, mentioned in all the colophons, was born in Damascus in the mid-thirteenth century though he lived most of his life in Cairo. This Qur’an is the only known surviving example of his work.  His choice of thuluth is rather strange, for by the Mamluk period this cursive script was generally considered ornamental, being used primarily for chapter headings and not for the body of the text. The gold thuluth script is outlined in black, with vowels marked in red and other spelling signs in blue. The layout of the calligraphy is also of special interest. Unlike many Qur’ans which have an odd number of lines per page, each page of the Baybars Qur’an carries six lines of text. Of interest, too, is the fact that the text layout is continuous, without large illuminated panels to indicate the beginning of a chapter, as in many other Qur’ans of the period. In this Qur’an, chapter headings are merely indicated by a change of colour, with red ink overlaying the gold, with no additional spacing between the lines. Ornamentation in the margins include illuminated medallions to indicate the end of a tenth verse; pear-shaped medallions to mark the end of a fifth verse; and illuminated oval markers for the sajdah, instructing the reader when to prostrate during the recitation of the Qur’an.

Detail of an illuminated oval marker containing the word sajdah instructing the reader to prostrate at this point during the recitation of the Qur’an (BL Add MS 22412, f. 156r)

Each volume of Sultan Baybars’ Qur’an has a magnificent double frontispiece or carpet page indicating the volume number in its central design. The illuminators worked on specific volumes: the colophon of volume one is signed by Muhammad ibn Mubadir and volume three by Abu Bakr Sandal, the master illuminator in charge of the team. 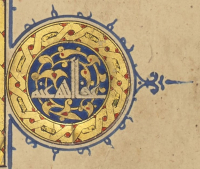 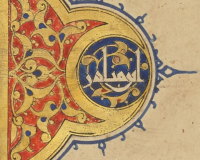 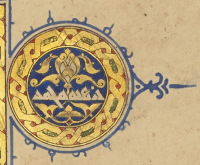 The style of ornamentation of volumes two, four, and six makes it more than likely that these volumes, though unsigned, were illuminated by Muhammad ibn Mubadir, and that volumes five and seven, also unsigned, were illuminated by Abu Bakr Sandal. Aydughdi ibn ‘Abdallah worked on all the volumes. According to the inscription in volume seven, his role was to paint-in “either the gold or polychrome areas”. This accords with David James’s interpretation of the Arabic verb zammaka in the inscription (James, Qur’ans of the Mamluks, p.67).

The inscriptions in the top and bottom panels describing the role carried out by Aydughdi ibn ‘Abdallah in all seven volumes (BL Add MS 22412, f. 2v)

Below the seven opening frontispieces are shown together for the first time: 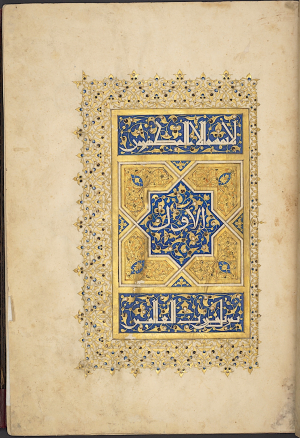 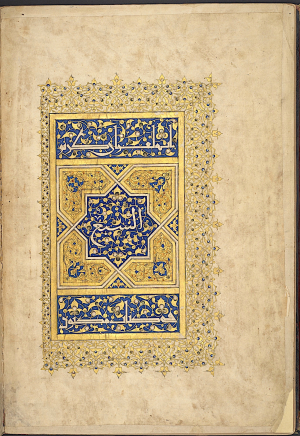 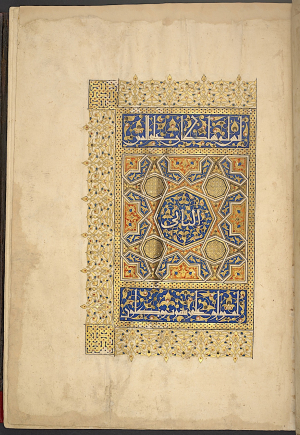 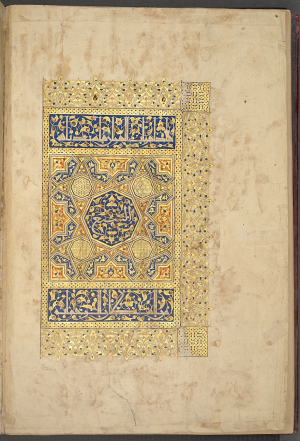 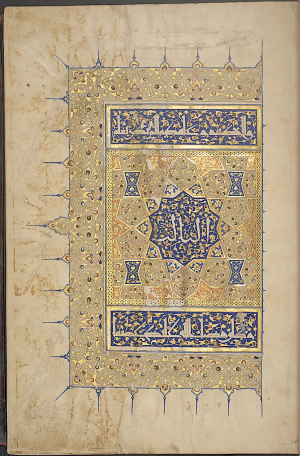 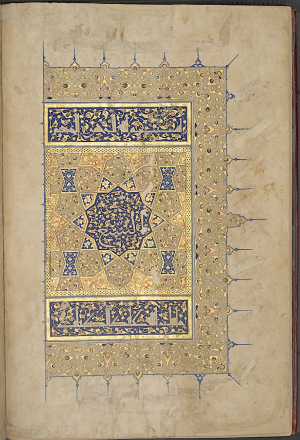 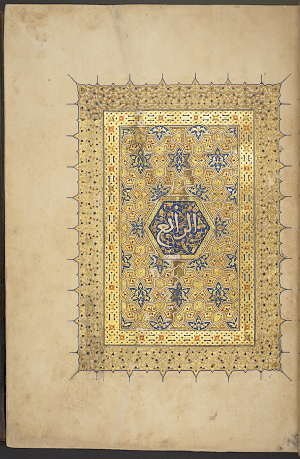 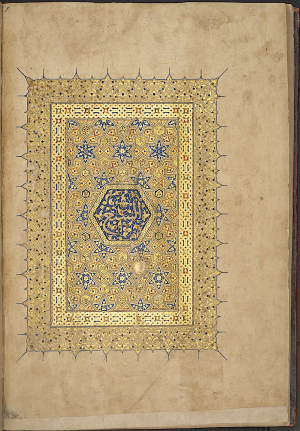 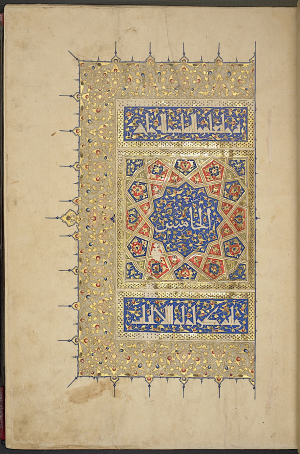 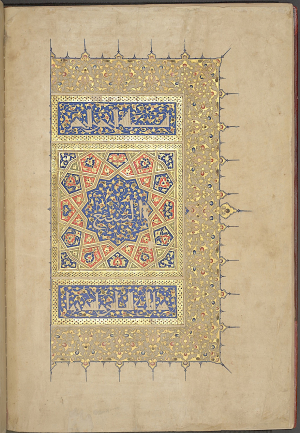 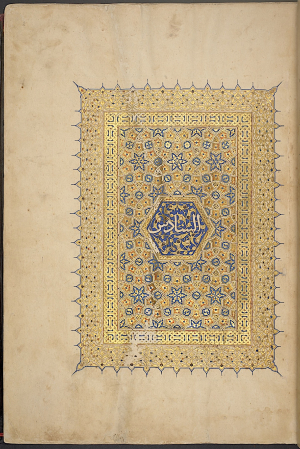 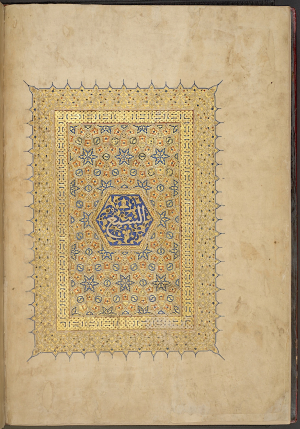 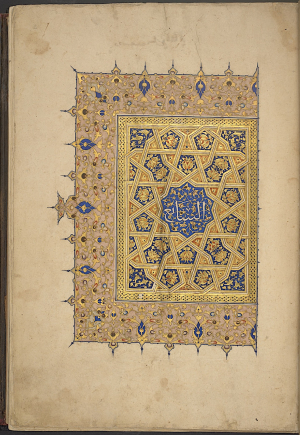 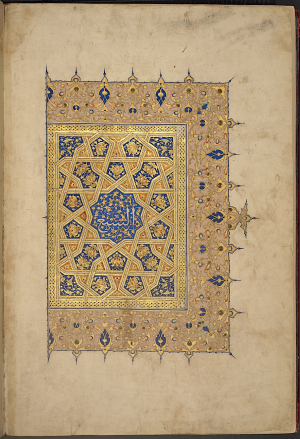 Posted by Ursula Sims-Williams at 12:09 AM