Buddhism Illuminated: Manuscript Art from Southeast Asia is a lavishly-illustrated book which has just been published by the British Library, in collaboration with Washington University Press. The book, by two curators in the British Library's Southeast Asia section, is dedicated to the memory of the Library’s former Curator of Thai, Lao and Cambodian collections, Dr Henry D. Ginsburg (1940-2007), who was a leading expert and one of the pioneers of research on Buddhist manuscript art in Southeast Asia. The purpose of this book is to share many years of research on the British Library’s unique collection of Southeast Asian manuscripts on Buddhism, which illustrate not only the life and teachings of the historical Buddha, but also everyday Buddhist practice, life within the monastic order, festivals, cosmology, and ethical principles and values. 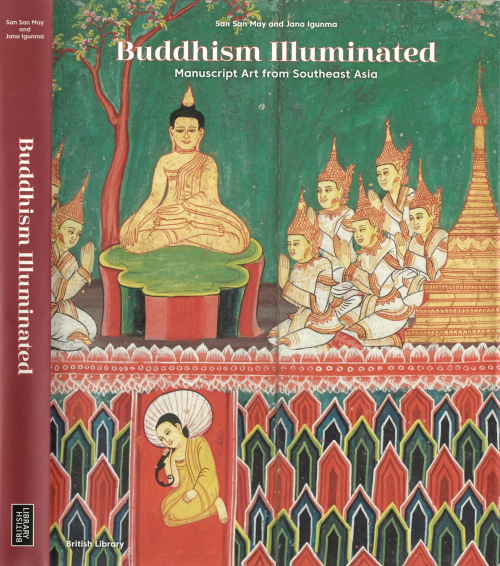 The book contains six chapters and over 200 high-quality coloured photographs of manuscripts which have mostly been digitised with generous funding from Henry Ginsburg’s Legacy. The illustrations are mainly from eighteenth and nineteenth century Burmese and Thai manuscripts, and the book provides detailed background information on Theravada Buddhism in general and Buddhist art in mainland Southeast Asia in particular.

A palm leaf manuscript of the Malalankara (the Burmese version of the Life of Gotama Buddha) from Burma, dated 1883. British Library, Or 16673

The palm leaf manuscript shown above has five bundles and is a fine example of Burmese craftsmanship and artistry. The leaves with gilded and lacquered edges are bound between a pair of red lacquered binding boards, together with a hand-woven sazigyo featuring Burmese script. The manuscript is wrapped in a cotton cloth with butterfly and flower patterns on a red coloured background. The text on the sazigyo states ‘May the merit of writing the scripture of the Buddha’s 45 years of glorious teachings help me to attain nibbana.’

The Library’s collections are particularly rich in illustrated folding books and palm leaf manuscripts featuring scenes from the Life of the Buddha, Jataka stories or Birth Tales, Buddhist cosmology, as well as festivals and rituals.

A Thai paper folding book (samut khoi) from the eighteenth century containing extracts from the Tipitaka with illustrations from the Ten Birth Tales (or the last Ten Jatakas). British Library, Or. 14068, f. 4

Each of the last Ten Birth Tales illustrates one of the Buddha’s great qualities, mahabuddhaguna. Illustrated in the Thai folding book above is the Nimi Jataka, illustrating the quality of resolution through the story of Prince Nimi who, thanks to his great merits, was invited to visit the Buddhist heavens. On his journey there, the charioteer stopped briefly at one hell where Nimi learned of the torments and sufferings in the Buddhist hells. This is one of a small number of surviving eighteenth-century manuscripts from central Thailand with illustrations of outstanding quality.

The second chapter,  “Buddha – The Enlightened One,” introduces the concept of Buddhahood and shows how the historical Gotama Buddha, who lived and taught in northeast India over 2,500 years ago, is depicted in manuscript illustrations. An overview is given of the 28 Buddhas of the past, as well as examples of Jatakas, stories of previous lives of the historical Buddha. Also presented in this chapter are important episodes from the life of the historical Buddha such as his birth as Prince Siddhattha, his famous renunciation of worldly life, the miracles of the Enlightened One, the Buddha’s visit to Tavatimsa heaven, his passing into parinibbana and the coming of the future Buddha Metteyya. 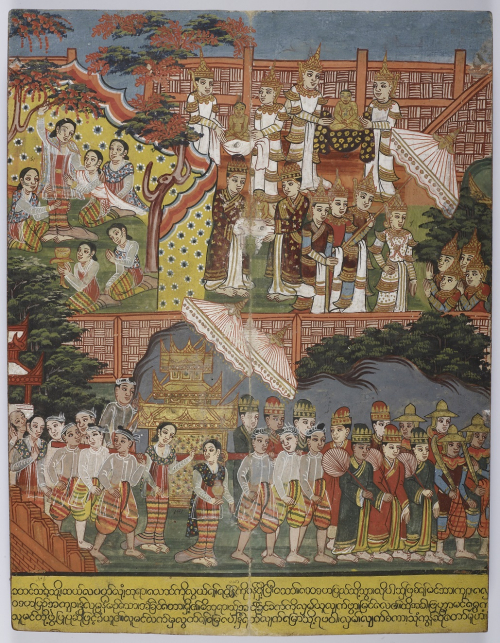 The birth of the Buddha-to-be (Prince Siddhattha Gotama) illustrated in the rare Burmese manuscript shown above depicts the procession of Queen Maha Maya through Lumbini Garden on her way to Devadaha, depicted at the bottom of the page. Above left we see Queen Maha Maya holding with her right hand a branch of the Sal tree for support and ease of pain while giving birth, with her left hand draped around the shoulder of Pajapati Gotami, the queen’s sister. The scene in the top right corner depicts the Brahmas receiving the new-born prince into the world. This is a fine example of Burmese artistic interpretations of scenes from the Life of Gotama Buddha.

After his enlightenment, the Buddha told his disciples and followers of his experiences in his previous existences, before he was born as Prince Siddhattha. The Buddha’s previous lives are the subject of a large collection of stories commonly known as Jatakas, or Birth Tales. The Jatakas show how he gradually acquired greater moral stature in passing from one incarnation to another. These stories are well-known in all Buddhist cultures of mainland Southeast Asia. The Buddha is thought to have narrated them during his ministry to his followers, using each Jataka to teach certain ethical principles and values. 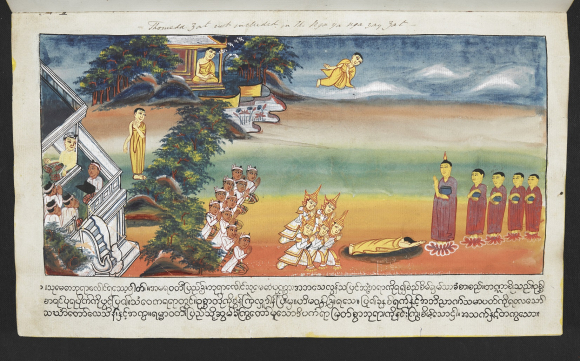 The Dipankara Jataka, the story of Dipankara Buddha, is special in the way that it tells of how the historical Buddha in one of his earlier incarnations met one of the 28 Buddhas of the past. The illustration above shows how the Buddha-to-be Sumedha receives his niyatha vivarana (prediction of future Buddhahood) from Dipankara Buddha, who had reached enlightenment aeons before Gotama Buddha. When he arrived at a place called Ramma, to honour him, local people cleaned the road for him to walk upon, and Sumedha took responsibility for one stretch of the muddy road. The Buddha Dipankara addressed the hermit Sumedha and foretells that in due time he will himself attain enlightenment and become a Buddha.

As well as the Buddhas of the past, the Buddha of the future, Metteyya, is also depicted in illustrated manuscripts. He is often portrayed in Thai manuscripts telling the legend of the monk Phra Malai, who, during his journey to the Buddhist heavens, learns about the coming of the future Buddha.

These two generously gilded illustrations in the Thai painting style of the nineteenth century are set in two of the Buddhist heavens, Tavatimsa (left) and Tusita (right). On the left, the monk Phra Malai is shown seated, in orange robes, in front of the heavenly Culamani Ceti. This stupa houses the hair collected by the god Sakka when Prince Siddhattha cut his topknot on adopting the ascetic life. Phra Malai converses with Sakka (shown here as a green figure) and a deva attendant. On the right the Bodhisatta Natha, the future Buddha Metteyya residing in Tusita heaven, is depicted with a group of female attendant deities, all wearing glamorous outfits. Tusita heaven is thought to be the residence of divine beings (devata). The appearance of the future Buddha Metteyya forecasts a blissful future for those humans who follow the Dhamma, or Buddha’s teachings.

Although the life of Gotama Buddha, and those of the Buddhas of the past and the future Buddha, are often at the center of Buddhist manuscript art, there is much more to learn from Southeast Asian manuscript art about Buddha’s teachings, life in the monastic order and everyday Buddhist practice. All the details can be found in the newly published book, and a few more will be revealed in part two of this blog which will follow soon.

The book is available from all major booksellers and online.