The British Museum was founded through the generosity, intellectual curiosity, and vision of the physician and collector Sir Hans Sloane (1660-1753). On his death in 1753, Sir Hans Sloane bequeathed to the nation his vast collections of natural history specimens, coins, medals and curiosities, as well as 50,000 books, prints and manuscripts, on condition that they be housed in a new and publicly accessible museum. In 1972 the books and manuscripts held in the British Museum, including the Sloane collection, were transferred to the British Library. 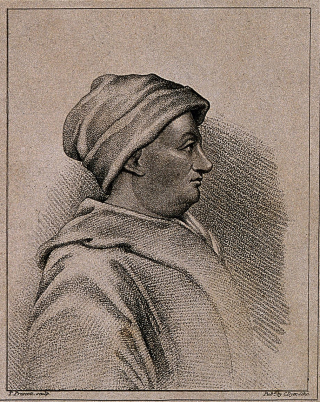 The extraordinarily eclectic nature of Sloane's manuscript collection has been described with some understatement as ‘very heterogenous’ (Arnold 2012: 190), and this evaluation could in turn be applied to the selection of his manuscripts from island Southeast Asia. In addition to two manuscripts in Malay, Sloane owned five items from Java, which though fragmentary in nature encompass a wide variety of languages and scripts (Javanese, Old Javanese, Lampung and Chinese) and writing materials (palm leaf, bamboo and paper), and range from commercial documents to a primer of religious law. Sloane's Javanese manuscripts, which are of interest not only for their diversity but also for their relatively early date, have now all been digitised and can be read on the Digitised Manuscripts website. For each manuscript, the first hyperlink below leads to the catalogue entry, and the second directly to the digitised image.

The broken piece of palm leaf shown above, Sloane 3480, contains an unidentified text written in Old Javanese, an early form of the Javanese language marked by a very high proportion of words derived from Sanskrit. Old Javanese was in use from around the 8th to the 13th centuries in Java, but manuscripts in Old Javanese continued to be found in scholarly circles in Bali until recent times. British Library, Sloane 3480

This palm leaf document inscribed in Javanese, Sloane 1035, is a record of a debt between a Chinese, Si Cina Kamasan, and Ratu Kilen. The piece of palm leaf is folded down the middle, with the spine evident along the top. British Library, Sloane 1035

Sloane 1403A is a single piece of palm-leaf is inscribed with Javanese text on one side and Chinese on the reverse. The Chinese text  is a record of the purchase of four cows, and is dated in the Chinese cycle perhaps equivalent to 1715. According to Dick van der Meij, the form of the Javanese characters on this leaf suggests an origin from Bali. British Library, Sloane 1403A

Sloane 1403E is a document written on a piece of bamboo, with two lines of Javanese text and annotations in Javanese and Lampung script on one side, and Chinese on the reverse. The Chinese text is probably a record of an account, dated in the Chinese cycle perhaps equivalent to 1708.  British Library, Sloane 1403E

The final manuscript, Sloane 2645, is a volume in Arabic with interlinear commentary in Javanese in Arabic (pegon) script, containing the Mukhtaṣar, ‘Commentary’, by the 16th-century scholar from the Hadramaut, ‘Abd Allāh bin ‘Abd al-Raḥmān Bā Faḍl. This work, the Muqaddima al-ḥaḍramiyya, 'Hadrami Introduction', also entitled Masā’īl al-ta‘līm, 'Questions for instruction', is an important text of the Shafi‘ī school of law, which was widely used throughout the Indian Ocean littoral spreading out from Yemen to East Africa and Southeast Asia. This well-preserved manuscript, copied in 1623, is one of the earliest dated manuscripts written on dluwang, Javanese paper made from the beaten bark of the mulberry tree. 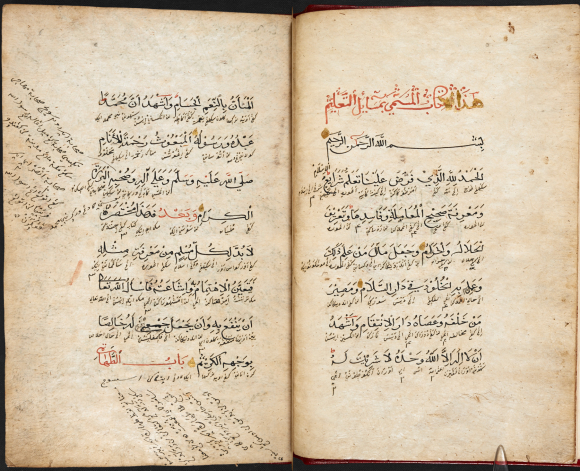 Opening pages of Masā’īl al-ta‘līm, with the first word of the title highlighted in gold, and rubrication on the first two pages. British Library, Sloane 2645, ff. 5v-6r 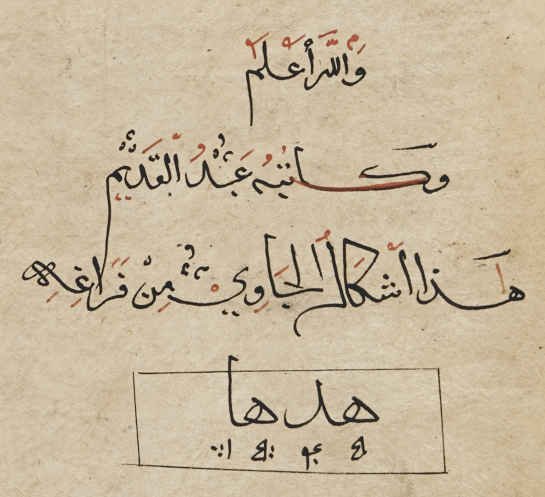 The writing of the date 1545 (AD 1623/4) in numerals is of some interest. It shows very clearly the standard Indian form of the numeral 5, like a reversed B, used throughout Southeast Asia until the late 19th century, but barely recognized any longer, having long been displaced by the standard Middle Eastern form of the numeral 5, ۵.  More intriguing is the use of a system of dots indicating the unit place: the 1 is followed by three dots indicating thousands, 5 is followed by two dots indicating hundreds, 4 is followed by one dot indicating tens, and finally 5 is in the unit of ones. Exactly the same protocol is utilised in a decorative roundel found at the start of the manuscript, reproduced below. 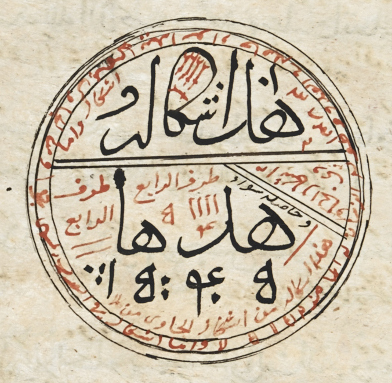 Decorative medallion containing the date at the start of the manuscript, 1545 in the Javanese era (AH), equivalent to AD 1623/4. British Library, Sloane 2645, f. 5r

With thanks to Dick van der Meij for advice on the Javanese, and Emma Goodliffe for reading the Chinese inscriptions.