This guest post by Katherine Butler Schofield introduces her recent talk at the British Library on Sophia Plowden, Khanum Jan, and 'Hindustani airs', now available as a podcast “The Courtesan and the Memsahib: Khanum Jan meets Sophia Plowden at the Court of Lucknow”, and accompanied here by a collection of images forming a visual record. The podcast, produced by Chris Elcombe with music by harpsichordist Jane Chapman, is part of a series of presentations at the British Library in 2018 for Katherine’s British Academy Mid-Career Fellowship programme “Histories of the Ephemeral: Writing on Music in Late Mughal India”.  Special thanks are due to the Fitzwilliam Museum, Cambridge, for permission to reproduce the images below from MS 380, Mrs Plowden’s beautiful collection of North Indian song lyrics and tunes. 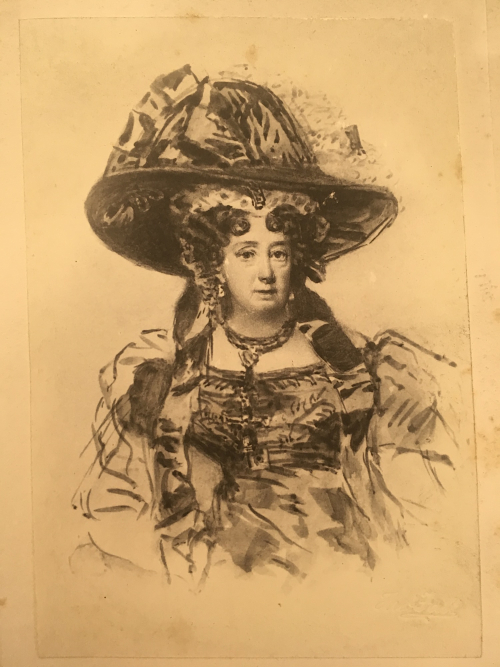 Among the British Library’s extraordinary collection of materials relating to the history of Indian music in the eighteenth and early nineteenth centuries lie dozens of European accounts of the nautch—intimate musical parties at which troupes of high-status North Indian courtesans would sing, dance, recite poetry, and match wits with the assembled company, often to mark special occasions like marriages or festivals. In the late Mughal and early colonial period, nautch troupes were employed as enthusiastically by Europeans as by Indian gentlemen. This famous painting from the Library’s collections below shows a man who is almost certainly Sir David Ochterlony, early nineteenth-century British Resident to the Mughal emperor, being entertained by his own personal nautch troupe at his home in Delhi. 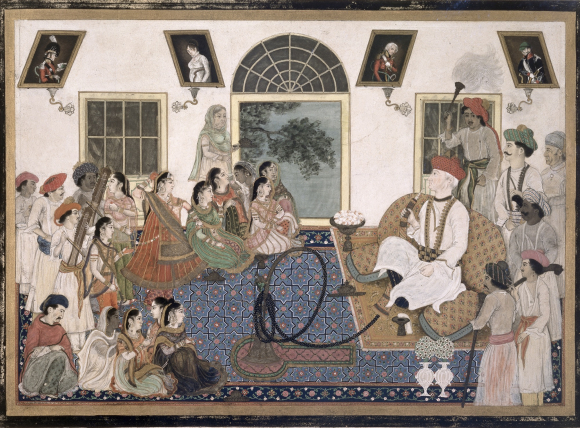 Published European travel writings from this period, by men and women, nearly all feature noteworthy encounters with North India’s famous “dancing girls”. But some of the most important materials on the nautch and its performers are to be found in the private papers of Europeans resident in India preserved in the collections of the India Office.

Of these, one set in particular stands out as unusual: the diary, letters, and other papers of an eighteenth-century Englishwoman—the memsahib of my title—Sophia Elizabeth Plowden. Sophia and her husband, the East India Company officer Richard Chicheley Plowden, were resident 1777–90 in Calcutta and the independent princely state of Lucknow under its ruler the Nawab Asafuddaula (r. 1775–97). The portrait of her in her papers, above, shows her as a respectable middle-aged matron of ten children, having returned to London and a genteel life in Harley Street. But in her younger days in India, in between having several babies Sophia spent a great deal of her time collecting and performing the Persian and Hindustani songs of nautch performers at the Lucknow court. One in particular captured her fascination—the celebrated Kashmiri courtesan Khanum Jan. Sophia wrote down Khanum’s songs and those of her companions in European notation; they were then turned into harmonised arrangements for the harpsichord, and published to great acclaim by William Hamilton Bird in Calcutta in 1789. For a while, these European-style salon pieces known as “Hindustani Airs” were all the rage in drawing rooms across the British Empire from Inverness to Singapore. 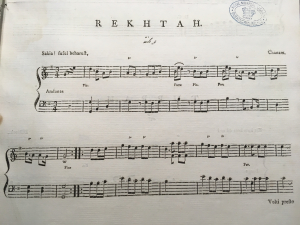 The European side of this story has been told before: it was in fact the British Library’s Ursula Sims-Williams who wrote the first lengthy piece on the Hindustani Airs phenomenon in 1981 for the India Office Library and Records Newsletter. Those who are interested can explore this angle further in books by Ian Woodfield, Music of the Raj, and Gerry Farrell, Indian Music and the West. Plowden’s harpsichord transcriptions and Bird’s arrangments squeezed the Indian originals firmly into European corsets, rendering Khanum’s songs ultimately impossible to recover. This has led to the obvious interpretation that they were instances of colonial violence to Indian culture. But recently I have been investigating a number of sources from the Indian side for this and similar musical engagements with Europeans in the late eighteenth century. These suggest that the episode was more complex, mutually enjoyable, and less morally certain.

At a time of heightened debate over the ethics of empire, it is important to keep in mind that sharing a moment of musical harmony was not why Plowden and her compatriots were in Lucknow. The British were there to pursue a colonial project designed to benefit themselves; and less than seventy years later in 1856, the East India Company would use the last Nawab of Lucknow’s attentions to exactly the same kind of music as their primary excuse to depose him—a major grievance that fed into the horrendous tragedy of the 1857 Indian Uprising. At the same time, viewing Plowden’s efforts from the perspective of the Indian musicians who engaged with her and others like her in the 1780s reveals the Hindustani Airs episode to have been a two-way affair of mutual curiosity and delight in musical minutiae— an open exploration of affinities and possibilities through trained bodily proficiencies, rather than a closing of ears to offensive differences. The wider historical ramifications of the mutually pleasurable liminal space of the nautch are thus ambiguous and unsettled.

The most important of the Indian sources for the Hindustani Airs are the loose-leaf folios of poetry in Persian, Urdu (then called rekhta), Punjabi, and other Indian languages that Sophia Plowden brought back with her from India alongide the tunes she wrote down from live nautch performances. These are held together as MS 380 in the Fitzwilliam Museum, Cambridge, and are an invaluable counterpart to her other papers in the British Library. Until recently, because of the exquisite illustrations garnishing each one, the loose-leaf folios were mischaracterised as a set of miniature paintings. But through painstaking detective work, I have identified them instead as the lyrics that go with the tunes. I have also managed to put about a quarter of them back together for the first time in over 200 years.

The question then is—is it possible to bring them back to life? 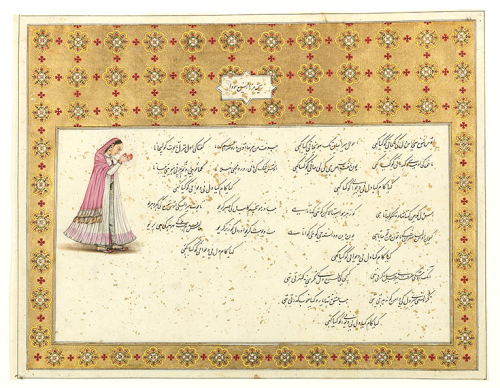 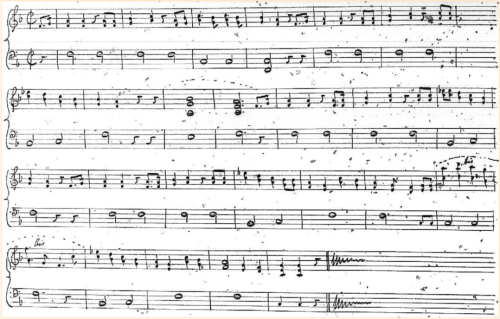 Join me and harpsichordist Jane Chapman as we retell the story of the entangled lives of these two extraordinary women musicians, Khanum Jan and Sophia Plowden, in the “Courtesan and the Memsahib” podcast —of a world in which an Indian courtesan could be treated like a celebrity London opera singer and an Englishwoman made a Mughal Begum by none other than the Emperor Shah ‘Alam II himself. Throughout, we explore the question—philosophically and practically through our own musical experiments—of whether it is possible to reconstruct the songs of the Lucknow court as both Sophia and Khanum may have performed them in the 1780s.

The images in this blogpost accompany the podcast, and will help guide you in your journey with us to the underworld of the Indian musical past, as we seek to discover whether or not it is ever possible for Orpheus to bring Eurydice back from the dead. A larger version of the images is available by clicking on each individually. 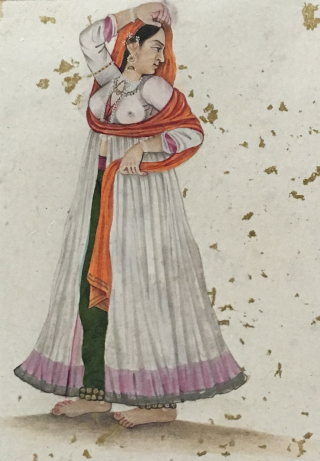 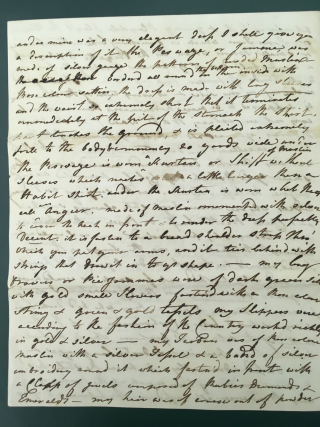 Left: the dress of a Lucknow courtesan. Plowden Album f. 25, detail. Lucknow, 1787–8. (Fitzwilliam Museum, Cambridge, MS 380) © Fitzwilliam Museum
Right: Sophia’s letter to her sister Lucy describing in detail the dress made for her to appear as a courtesan in a Calcutta masquerade. Calcutta, 4th April 1783 (BL MSS Eur B 187) 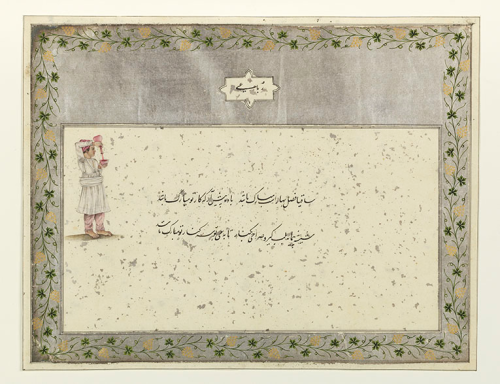 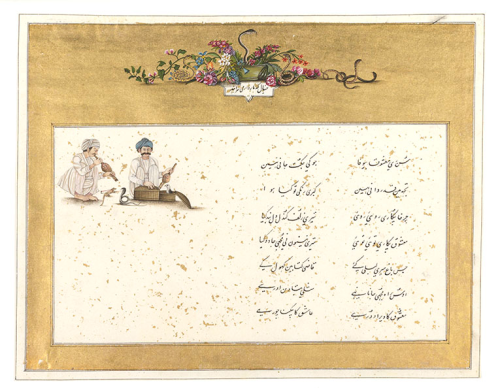 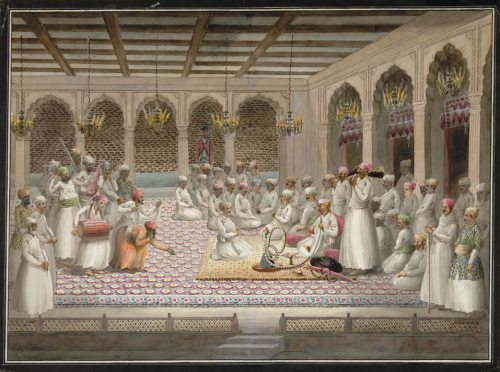 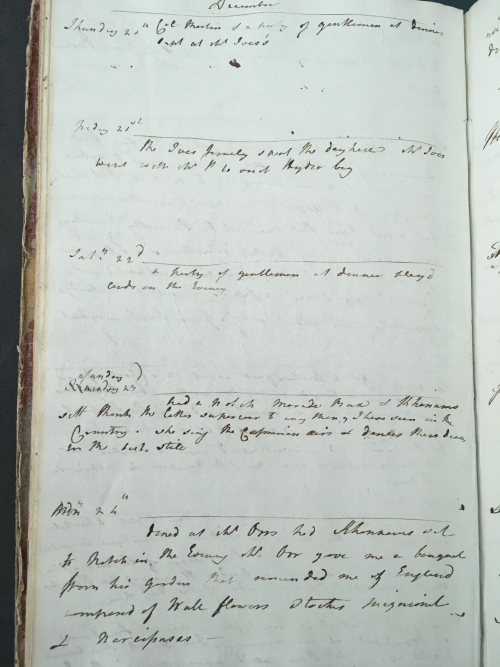 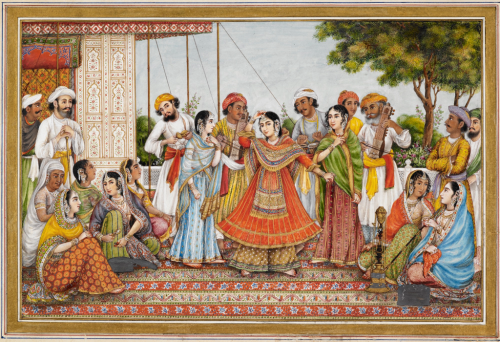 Painting of Colonel James Skinner’s nautch troupe, given as a souvenir to a European visitor. Delhi, c. 1838 (BL Add.Or.2598) 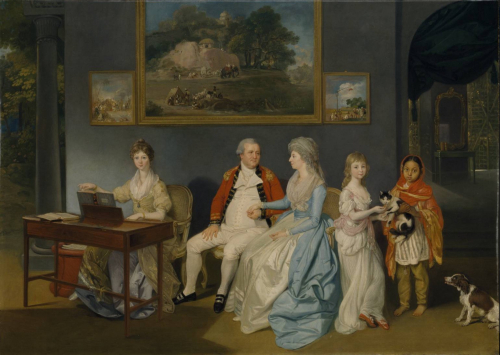 Colonel William Blair and his family in India with his daughter Jane at the pianoforte.  Johan Zoffany, 1786 (Tate Britain, T12610) 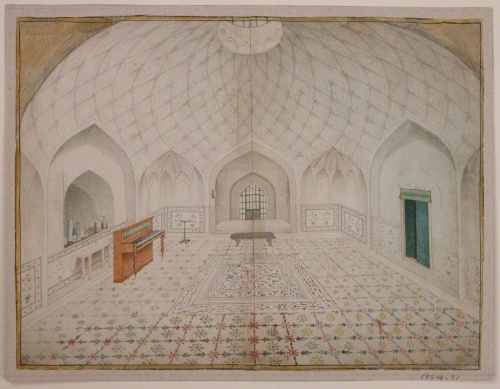 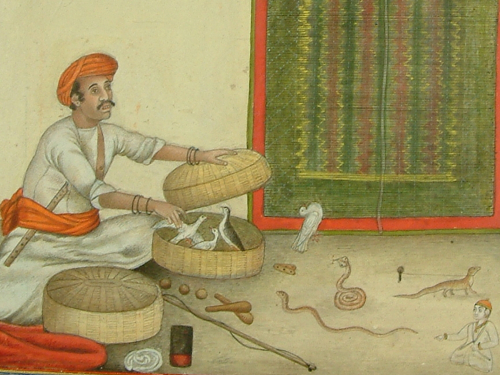 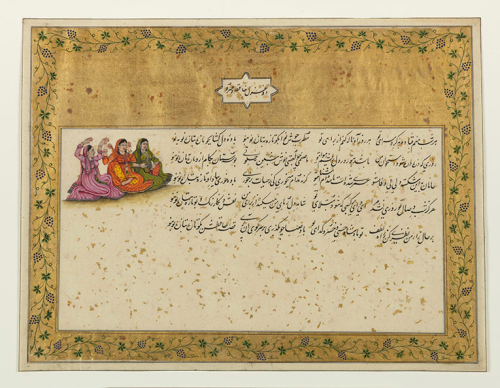 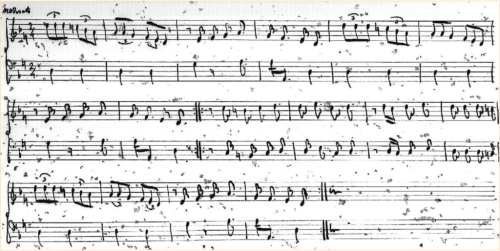 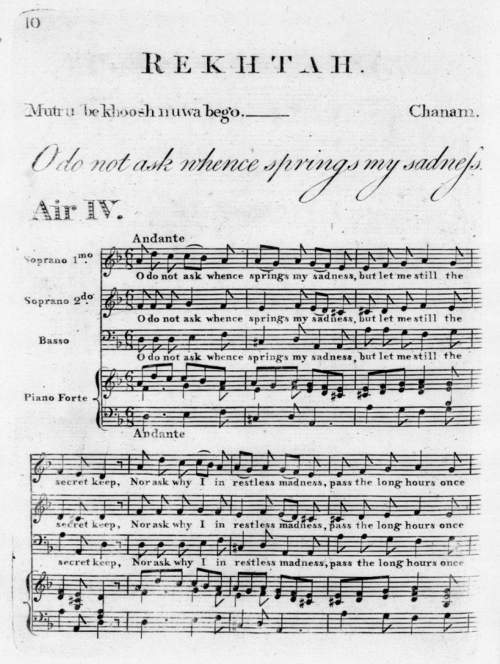 “A dancing woman of Lucknow, exhibiting before an European family,” by Charles D’Oyly. Plate from Thomas Williamson, The costume and customs of modern India. London, c.1824 (BL X 380) 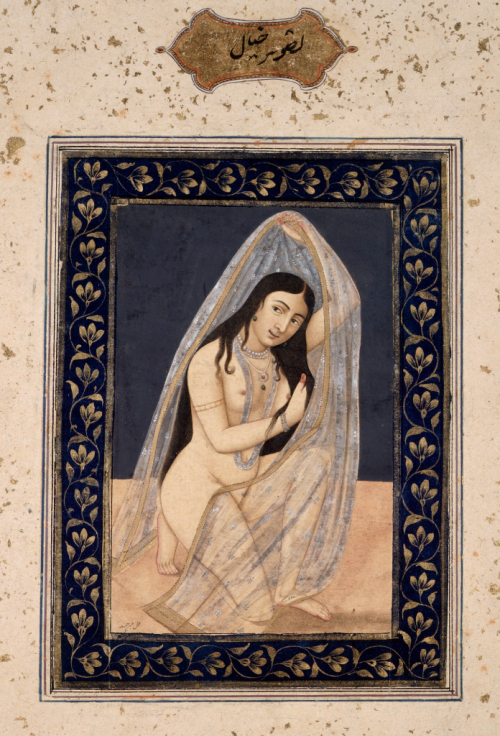 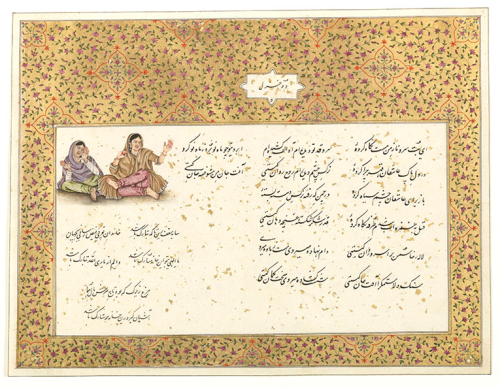 “The Courtesan and the Memsahib” was written and performed by Katherine Butler Schofield with harpsichordist Jane Chapman. Additional voices were: Georgie Pope, Kanav Gupta, Priyanka Basu, and Michael Bywater. Recordings of vocalists Kesarbai Kerkar and Gangubai Hangal, and sarangi player Hamid Hussain, are courtesy of the Archive of Indian Music and Vikram Sampath; selections from Jane Chapman’s studio recording “The Oriental Miscellany” are found on Signum Classics.

Posted by Ursula Sims-Williams at 2:14 AM