The Bugis diary of the Maqdanrang of Bone

The most well-known Bugis manuscript in the British Library is the diary of Sultan Ahmad al-Salih Syamsuddin of Bone (r. 1775-1812), covering the two decades from the start of his reign in 1775 to 1795. This treasury of information on daily life at the court of Bone in south Sulawesi was made accessible through the doctoral study by Rahilah Omar (2003), and the full diary, Add. 12354, is accessible online.

Now a second Bugis court diary from Bone, Or. 8154, covering the years 1790 to 1800, has also been digitised. A. A. Cense identified the diarist as the Maqdanrang, one of the highest Bone officials: “it was he who dealt with all kinds of state affairs and through whose hands all important letters passed. The notes for the years 1795-8 give much information on the struggle between Bone and Sidenreng, the attitude of the other south Sulawesi states, and Dutch efforts to maintain peace. Some notes refer to battles, the erection of strongholds, and chiefs who died in action. For the rest the diary contains notes on legal questions, especially on matrimonial law and property. Events in the royal family and the ruling classes receive great attention” (Ricklefs and Voorhoeve 1977: 34). Rahilah (2003: 58) has named the Maqdanrang as Muhammad Ramallang (the Bugis form of the Arabic Ramaḍān), Arung (Lord) Ponre, father-in-law and maternal uncle of the ruler, Sultan Ahmad al-Salih. An entry in the Sultan's diary for 7 July 1775 announces the appointment of Muhammad Ramallang as Maqdanrang or private secretary to the ruler, one of the three most senior officials in the Bone administration, along with the Tomarilalang, head of the advisory council, and the Maqkedangngetana, 'Spokesman of the Land' (Rahilah 2003: 196). 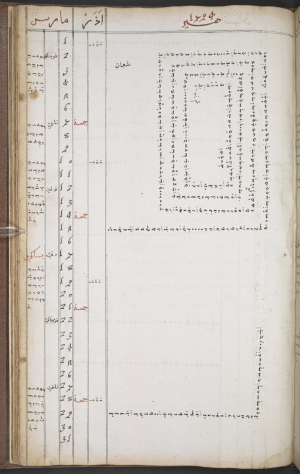 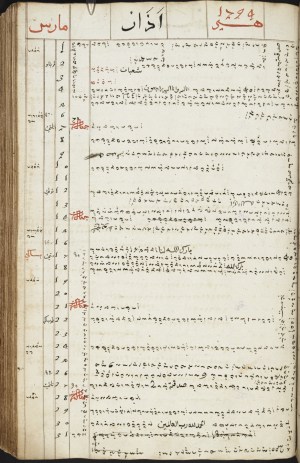 As was usual for Bugis court diaries, the pages were prepared in advance, with one month per page according to the Gregorian (AD) calendar, with one line allocated for each day of the month, and Fridays (Jumaat) highlighted in red. If the events of the day took up more than one line, the scribe would write in a rectangular labyrinthine pattern, as shown above. In between each year, a few pages were always originally left blank, and these could be filled with miscellaneous jottings and copies of important documents. Found in the Maqdanrang's diary are notes on a wide variety of subjects, including on alliances and war activities, correspondence with the Dutch, and on the astronomical, meteorological, and agricultural calendar. 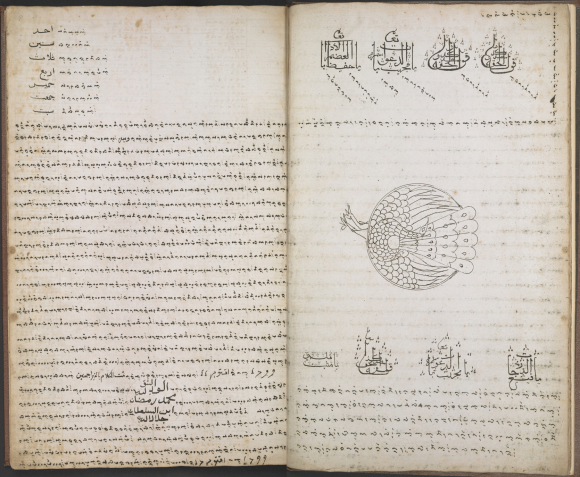 On the left-hand page are notes on names of days and their auspicious or inauspicious natures, and on the right-hand page are rules for people who pay homage to the Arumpone (the sultan), as well as calligraphic sketches of letter headings. British Library, Or. 8154, ff. 7v-8r

Stored alongside this diary is a second volume, Or. 8154*, which contains 103 letters, fragments of letters, and scraps of paper in Bugis, Makasarese, Malay and Arabic, said to have been found inside the binding of Or. 8154, presumably when the volume was rebound in the British Museum bindery in the early 20th century. Both volumes were presented to the British Museum in 1916 by a Miss E. G. Wren. It is probable that these two volumes - like the other Bugis manuscripts in the British Library from the collection of John Crawfurd - were acquired during the British military campaign against Bone in 1814.

Among the miscellaneous notes found in the diary of Sultan Ahmad al-Salih are sketches for his seal, and a similar feature is encountered in the Maqdanrang's diary. As can be seen on the left-hand page above, nestled amongst notes is a circular sketch of a seal, inscribed in Arabic al-wāthiq billāh Muhammad Ramadan ibn al-Sultan Jalaluddin, ‘He who trusts in God, Muhammad Ramadan, son of the Sultan Jalaluddin’, referring to his father Sultan Abdul Razak Jalaluddin of Bone (r. 1748-1775). This inscription can be linked with a 12-petalled seal of which numerous faint  impressions are found in Or. 8154*, while a much clearer impression can be seen on a contract between Bone and the Dutch of 27 December 1794, signed and sealed by the Sultan, Maqdanrang and Tomarilalang of Bone. The original silver seal matrix is held today in the Museum Lapawawoi in Watampone, Bone. 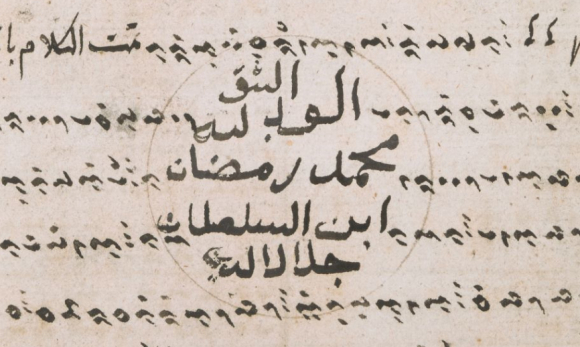 Sketch for a seal in the name of Muhammad Ramadan in the diary of the Maqdanrang of Bone. Or. 8154, f. 8r 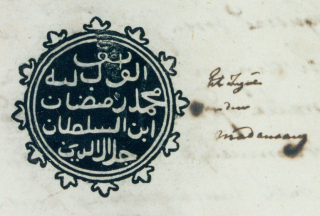 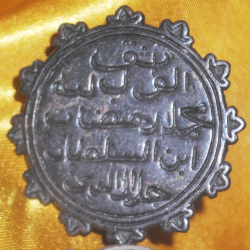 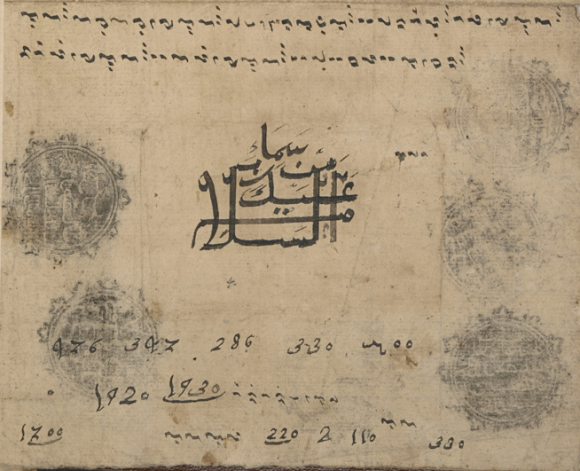 Faint impressions of the seal of Muhammad Ramadan on a document. British Library, Or. 8154*, f. 40v