Manuscripts of the Qur’an exist in many different sizes and forms: in single volumes and also in multi-volume sets ranging from two to seven, ten, thirty or sixty volumes. However it was not until recently, while working on Qur’ans in the Tipu Sultan collection, that I became aware of the popularity of thirty-leaved Qur’ans, described as ‘si-varqī’ which were popular in South Asia from the seventeenth century onwards. These copies are based on the thirty equal sections juz’ (pl. ajzā’), designed to be read over a single thirty-day month, notably the fasting month of Ramadan, with one juz’ spread over two facing pages. 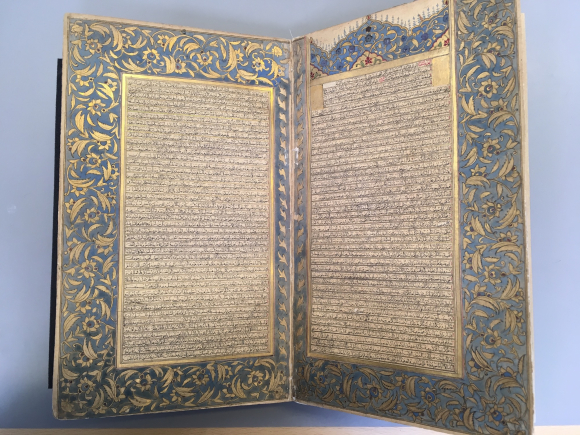 The earliest reference to this format that I have come across is in the Tazkirah-ʼi khvushnivīsān, a biographical dictionary of calligraphers by the late eighteenth-century calligrapher Ghulam Muhammad Raqim Haft-qalami (Haft-qalami, pp 125-6, quoted by Bayani, pp.172-3). Haft-qalami writes that in the reign of Shah Jahan (r. 1628-58) a scribe called ʻAbd Allah, better known as ʻAbd al-Baqi Haddad, a particularly famous naskh calligrapher, came to India from Iran and presented prince Awrangzeb with a thirty-leaved Qur’an and other manuscripts for which he was awarded the title Yāqūt-raqam before returning home again.

The earliest thirty-leaved Qur’an that I have detailed information about is CBL Is 1562[1], in the Chester Beatty Library, which dates from before 1083 (1672/73) – the date of an inscription following the colophon. The illuminated opening contains the Sūrat al-Fātiḥah spread over two pages, while throughout the manuscript margins, delineated by ruled borders, are filled with stemmed flowering plants in gold (similar to those found in the margins of many seventeenth-century imperial Mughal albums) and simple gold medallions marking divisions of the text. The British Library has altogether four thirty-leaved Qur’ans, three of which belonged formerly to Tipu Sultan of Mysore (r. 1782-99). Although undated, one, IO Islamic 1267, is stamped with the octagonal seal of a previous owner Zu’l-Fiqar ʻAli Khan 1141 (1728/29). The other two, IO Islamic 1376 and IO Islamic 3250 are probably more recent, but Tipu Sultan’s death in 1799 places them in the eighteenth century or earlier. A fourth Qur’an, IO Islamic 3534, dated 1266 (1849/50), is much later and includes a Persian commentary in the margins. 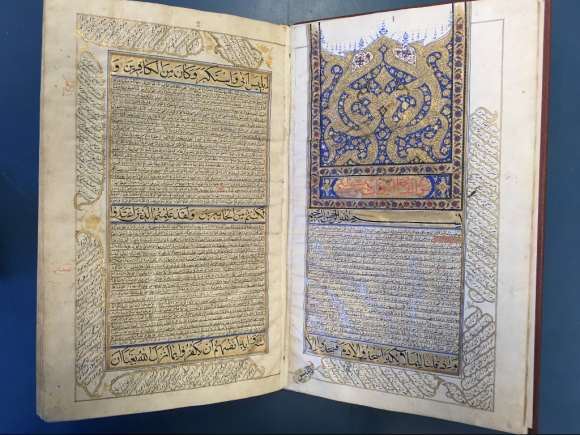 Unlike the Tipu Qur’ans, this copy dated 1266 (1849/50) by the scribe Vali, includes a half-page ornamental heading (sarlawḥ). The margins contain an as yet unidentified Persian commentary. The text block is divided by three lines of larger calligraphic script on a gold ground (BL IO Islamic 3534, ff.1v-2r)

These Qur’ans share many features typical of Indian Qur’ans such as the division of the text into quarters or eighths of a juzʼ[2] and the use of interlinear rulings between each line of text. However one especially striking feature is the use of the letter alif at the beginning of each line, which occurs in two of our four copies. Such Qur’ans are today much prized and termed ‘alifi’. A search on the web reveals any number of deluxe printed editions. However ‘alifi’ manuscript Qur’ans seem to be comparatively little known, or at least they have not been the subject of written research. 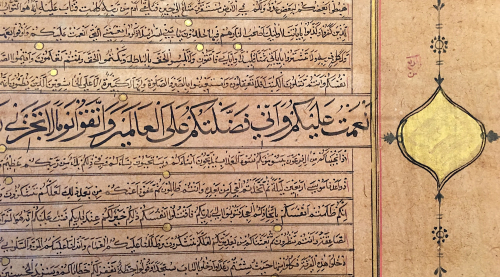 Details showing (above) an initial alif in red ink at the beginning of each line of the main text. In the lower image, which occurs at the beginning of the second juz’, the alifs were never inserted, leaving an empty space. The fact that the first two lines begin with a black alif, suggest that perhaps the scribe ran out of red ink and then forgot to finish off the copy later. Also visible in the margins is the juz’ eighth marker (thumn al-rubʻ) and medallions which in this Qur’an serve a purely decorative purpose (BL IO Islamic 1376, ff. 1v and 2v) 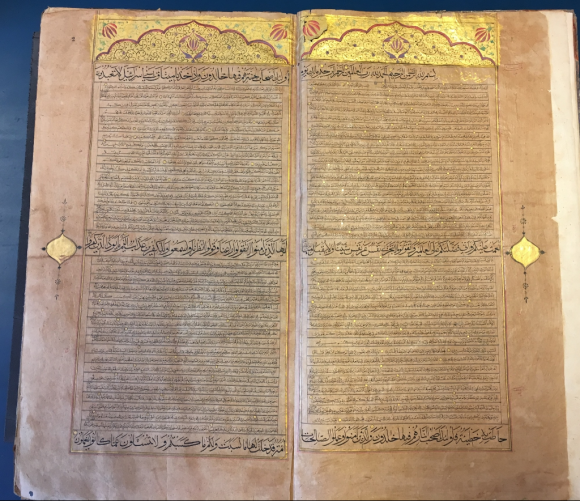 The double page opening of an undated thirty-leaved Qur’an from Tipu Sultan’s library. The initial alifs, the use of gold, the marginal devices and the calligraphic panels at the top, middle and bottom of each page, suggest that this was a particularly valuable Qurʼan (IO Islamic 1376, ff. 1v-2r)

The largest of our four thirty-leaved Qur’ans, IO Islamic 1376 (pictured above), is 43 x 23.2 cms, so from a practical point of view it would be quite easy to hold. The limitations of the thirty-leaved format, however, required that the text be proportionally small making it therefore correspondingly difficult to read. Our copies were written in a small naskh hand although in IO Islamic 1376 and IO Islamic 3534 the top, middle and bottom line of each page has been copied in a larger script. This tri-partite division is particularly noteworthy, shared, for example, by only one of the thirteen thirty-leaved Qurʼans in the Salar Jung collection[3]. To save space the headings in three of the four are also quite minimal, placed in the upper margin above the text block so as not to interfere with the basic design of one juz’ per opening.

Illuminated heading placed in the upper margin above the text block. The sūrah headings and the juzʼ indications are written inline in red ink and each line is separated by a double interlinear ruling (BL IO Islamic 1267, f. 1v) 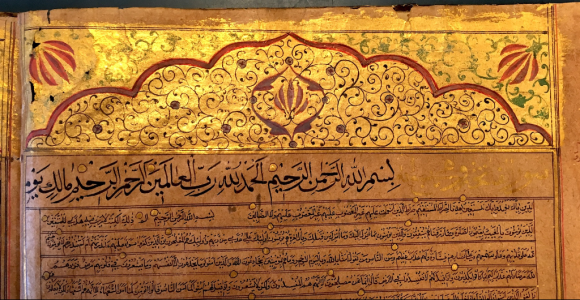 Here a scalloped triangle forms the basis of the heading which is repeated on the facing page. The sūrah heading, in gold, and the first verse are in a larger calligraphic script. Note also the raised gold verse markers and the interlinear rulings (BL IO Islamic 1376, f. 1v)

A similarly scalloped heading is outlined above the two opening pages at the beginning of this Qur’an. Here the sūrah headings are marked inline in red and the juz’ indications are given in the margins (BL IO Islamic 3250, f. 1v) 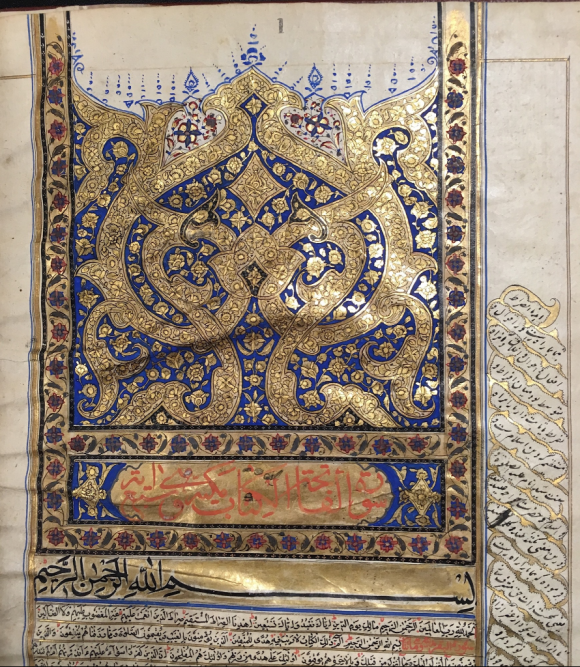 The half-page sarlawḥ of a thirty-leaved Qur’an dated 1266 (1849/50). The dimensions of the heading have had the effect of displacing the division of the sections (juz’) which begin mid-page rather than at the top right of each opening (BL IO Islamic 3534, f. 1v)

In terms of marginal decorations, only IO Islamic 1376 has the typical medallion-shaped devices which are a regular feature of Qur’anic illumination. The margins of IO Islamic 1267 are decorated with gilt floral arabesques on a blue ground in the opening and on a clear ground in the subsequent pages. The margins of IO Islamic 3534 contain a Persian commentary enclosed within gilt leaf-inspired edges, with occasional flowers and leaves interspersed. 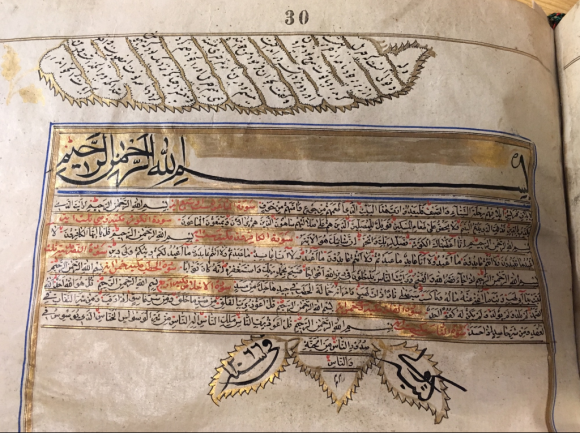 Thirty-leaved Qur’ans were clearly a popular format. Although only four are preserved at the British Library, Charles Stewart's 1809 Descriptive Catalogue of the Oriental Library of the late Tippoo Sultan of Mysore mentions six (out of a total of seventy-nine Qurʼans or parts of the Qur'an in Tipu Sultan's collection). There are descriptions of a further five in the Khuda Bakhsh Oriental Library, Patna, one of which (no. 1171) was copied in Muharram 1112 (1700) by the same calligrapher ʻAbd al-Baqi Haddad mentioned in the Tazkirah-ʼi khvushnivīsān referred to above. Muhammad Ashraf, in his catalogue of the Salar Jung Qur'ans, describes thirteen copies which include one (Ms 202, no 108), an alifi Qur’an dated 1109 (1697/98), copied by Muhammad Baqi in the island of Socotra. Four of the Salar Jung copies date from the seventeenth century, eight from the eighteenth and one from the nineteenth. Three of these are alifi Qur’ans.

For those interested in Qur’anic illumination and decoration in general there is an extensive literature available and Qur’ans have been the subject of several recent exhibitions including Sacred at the British Library and The Art of the Qur’an: Treasures from the Museum of Turkish and Islamic Arts at the Freer Sackler. However the study of Indian Qur’ans has been much neglected with even less written on manuscripts from the seventeenth to nineteenth centuries apart from Manijeh Bayani and Tim Stanley’s work on the Khalili Collection (see below: The decorated word). There is a vast amount of material available, however, leaving plenty of scope for future research by enterprising scholars.


Ursula Sims-Williams, Lead Curator Persian
with thanks to Elaine Wright and my colleagues Colin Baker, Annabel Teh Gallop and Sâqib Bâburî

[1] I thank Elaine Wright for sending me details of this Qur’an.
[2] Many of these features are also shared with Qur’ans from Southeast Asia as described in Annabel Teh Gallop’s “The Boné Qur’an from South Sulawesi” (see above).
[3] Ms 175, no. 213 in Salar Jung, catalogue (see above).

Posted by Ursula Sims-Williams at 9:52 AM