The Makasar people originate from south Sulawesi, the bottom left arm of the orchid-shaped island of Sulawesi. In the 17th century the port-city of Makasar (alternatively spelled Makassar or Macassar), comprising the twin kingdoms of Gowa and Tallo’, was one of the greatest and most cosmopolitan ports in Southeast Asia. A gateway to the spice trade of the Moluccas, and an important source of rice, Makasar had particularly benefitted from an influx of Malay and other Muslim merchants following the fall of Melaka to the Portuguese in 1511. Makasar embraced Islam relatively late, with the conversion of the sultan of Gowa in 1605, but Islam rapidly became firmly entrenched in south Sulawesi society. 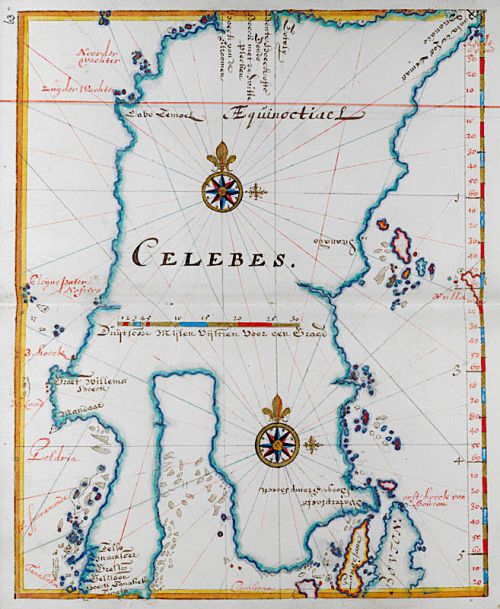 Writing traditions in the Makasar language (also referred to as Makasarese, Makassar or Makassarese) date back at least to the 17th century, and may be encountered in four different scripts. Old Makasar script is of Indic origin, and is written from left to right. It is mainly associated with manuscripts in the 17th and 18th century and appears to have become obsolete in the course of the 19th century, since when the Bugis/Makasar script has been used. However, the Bugis/Makasar script (often called simply Bugis script) coexisted with Old Makasar script from the 17th century onwards, and both probably developed from an earlier prototype similar to Kawi or Old Javanese script. Makasar can also be written in  Arabic script (known locally as serang), which was frequently used in religious contexts, and texts in Roman script are also found (Tol 1996: 214). 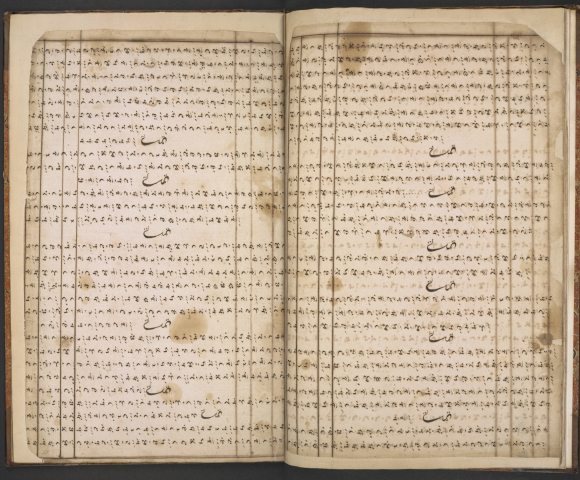 Copies of treaties between Goa and Tallo' in the 16th century, in Makasarese in Old Makasar script. British Library, Add. 12351, ff. 12v-13r.  [NB these pages have been bound upside down in the manuscript.]

The manuscript in Old Makasar script, Add. 12351, contains copies of documents on a variety of historical, diplomatic and legal topics, which were identified by Dr A. A. Cense for the catalogue of Indonesian mansucripts in British collections (Ricklefs & Voorhoeve 1977: 99).  Contents include the sayings of former princes, declarations of war, and notes on right behaviour and customary law.  There are also texts on the status of the countries of the island of Sumbawa which were subdued by Tumenanga riAgamana, king of Tallo’ and co-ruler of Goa in the beginning of the 17th century, as well as copies of treaties between Goa and Bone, and between Goa and Tallo’ in the 16th century.  Other texts concern the history of various polities in south Sulawesi covering periods up to the mid-17th century, including Goa, up to and including the reign of Tu-menanga riPapambatuna (1649-53); Tallo’, up to and including the reign of Tu-mammalianga riTimoro' (1636-41); Sanrabone, Maros and Bangkala’, as well as notes on the ancestors of Karaeng Cenrana and of Tu-menanga riLakiung (lived 1652-1709).  Parts of this manuscript (from ff. 12v-35v) have been bound upside down. 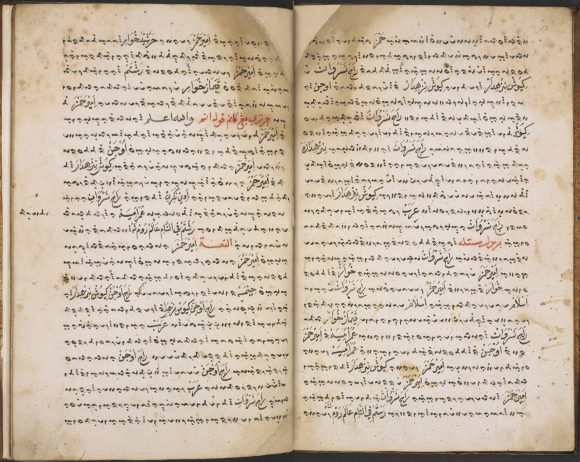 Hikayat Amir Hamzah, written in Makasarese in Bugis/Makasar script, with names of the characters written in Arabic script in black ink, and chapter headings and 'paragraph words' in Malay written in red in Arabic (Jawi) script. Add. 12347, ff. 11v-12r.

The second Makasar manuscript, Add. 12347, is a fragment of a Makasar version of the Malay Hikayat Amir Hamzah, itself derived from the Persian Hamzanama, recounting the adventures of the uncle of the prophet Muhammad. The manuscript is written in Makasar script (which reads from left to right), with insertions in Malay in Jawi script (which reads from right to left) marking the start of new chapters and sections in the text. Reflecting the confusion of a 19th-century custodian, the folios in the manuscript have been numbered ‘backwards’. The volume therefore begins on f. 37r with the 59th chapter (with a heading in Malay in Jawi script: ceritera yang keanam puluh sembilan), dealing with Amir Hamza's fight against Sudad and his grief at the death of his wife Mihrananigara. The manuscript ends abruptly in the 68th chapter, in which Hamza's voyage to the country of Ḥuṭānah is described, where he finds Raja Nasarwan (Nasruwan), on the way encountering a group of fire-worshippers.

Although these are the only two full manuscript volumes in Makasar in the British Library, there are also a number of documents and fragmentary texts in Makasar contained in mainly Bugis manuscripts. For example, Or 8154*, a volume consisting of scraps of texts found within the binding of the Bugis diary of a prince of Bone for the years 1790-1800, contains a few Makasar documents including a fragment of a page from a diary written in Old Makasar script for 1733 shown below. 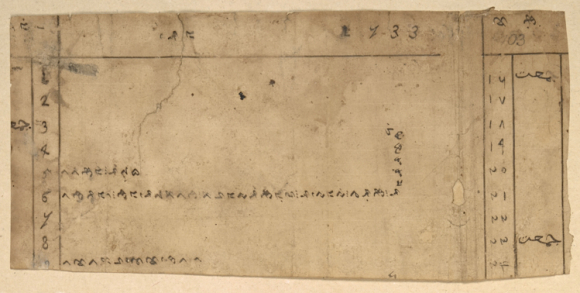 Through the Endangered Archives Programme, the British Library also holds digital copies of a few Makasar manuscripts, documented during a pilot project in Makassar.