‘An inexperienced and incompetent chauffeur’: the Anglo-Soviet invasion of Iran

At dawn on 25th August 1941, the people of Iran awoke to a full-scale invasion of their country by the combined forces of Britain and the Soviet Union. Within three weeks the Iranian military had been overwhelmed, Tehran had fallen under foreign occupation for the first time in its history, and the Shah had been forced into exile and replaced with his 21-year-old son Mohammad Reza. Operation Countenance, as the invasion was codenamed, was one of the most successful Allied campaigns of the war and it was carried out against a neutral nation. Although British troops had occupied parts of Iran during the First World War, that occupation had been characterised as a response to direct German and Ottoman aggression in the region and they had neither entered the capital nor disrupted the government. There were a complex array of factors that provoked the far more extreme manoeuvres of 1941, some of which are revealed within certain India Office Record files held at the British Library. 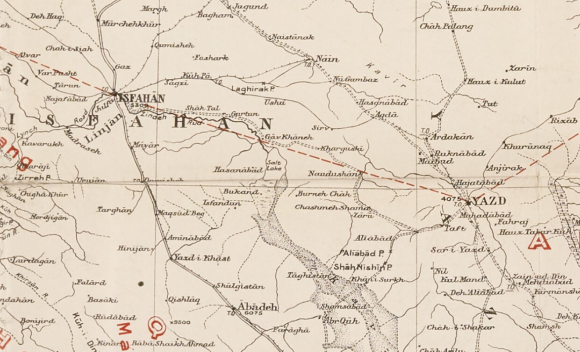 Detail from a map of Iran (1912) showing the unofficial demarcation line between the British and Soviet spheres of influence (British Library, India Office Records IOR/L/MIL/17/15/5, f 230)

The reign of Reza Shah Pahlavi had been marked by his large-scale modernisation projects, not least in terms of Iranian military power. Even before his elevation to the throne, as Minister of War under his predecessor Ahmad Shah Qajar, he had created the country’s first unified standing army. As Shah he continued to build on this, making significant arms purchases from various countries. “We have been viewing with a certain amount of concern Persia’s large orders in the arms markets of Europe and America” wrote Hastings Ismay in the introduction to a War Office report of 1933 estimating that in the previous two years Iran had purchased 119 aircraft, 1,400 machine-guns, nearly 200,000 rifles and over 16 million rounds of ammunition, among much else. 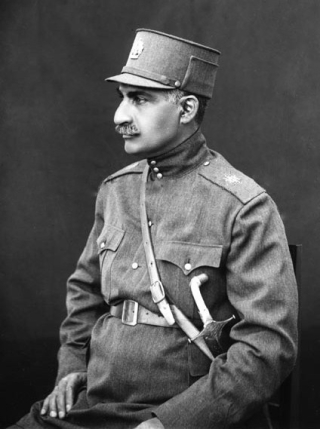 However, not everyone in the British Government agreed that these purchases were a cause for concern. “All these highly technical appliances are of little value unless the best can be got out of them” a Foreign Office official wrote in reply to Ismay’s report, “I have not noticed anywhere that the Persian Army is considered either highly trained or high in morale.” A report from 1936 agreed with this assessment that the Iranian military were ill equipped to make use of their newly acquired equipment, comparing them to “an inexperienced and incompetent chauffeur placed in sole charge of a fleet of expensive motor cars of intricate design.” The British Government certainly never made any serious attempt to limit Iranian arms purchases. As late as 14th July 1941, less than six weeks prior to the invasion, a Foreign Office telegram sent to the UK Ambassador in Iran stated that the Government would “continue to permit the export to Iran of aircraft material.” 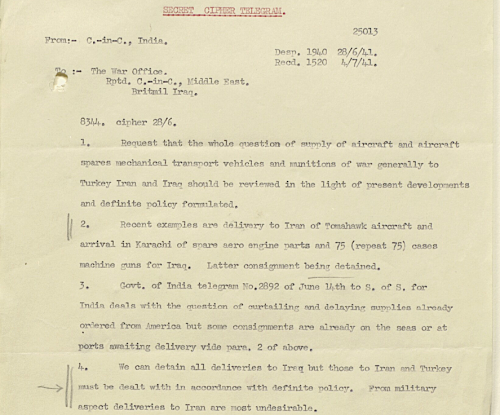 Telegram from the Government of India to the War Office, 28th June 1941, suggesting an end to military exports to Iran (British Library, India Office Records IOR/L/PS/12/551)

Taken more seriously as a threat than Iran’s military strength was the perceived growth of German influence in the region. A small number of German engineers employed in Iran as industrial consultants were suspected not just of promoting their country’s cause to those in positions of power, but also of secretly stirring up anti-British sentiment among the native population. Although Iran may have favoured the Allies at the outbreak of the war, wrote the British Envoy to Tehran Sir Reader Bullard in March of 1940, “recently there has been a slight change in the other direction.” A telegram from the Government of India to the India Office sent on 6th July 1941 described Iran as the “centre of German intrigue in Asia [which] now harbours important Arab revolutionaries,” and suggested that the removal of German nationals “could not fail to add to military security and upset the German plans.” In the months leading up to the invasion both the British and Soviet governments put increasing pressure on the Shah to expel all Germans from Iran and his failure to comply was cited as justification for their intervention. 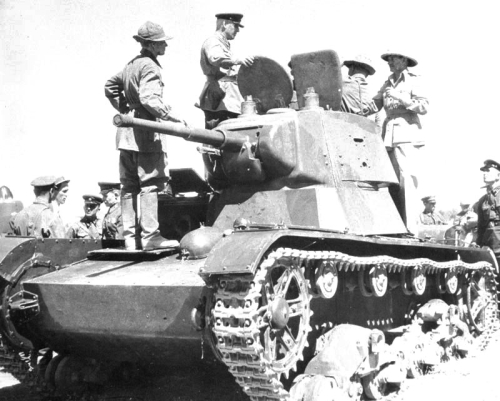 Soviet concerns over German influence were initially kept in check by their non-aggression agreement with Nazi Germany, the Molotov-Ribbentrop Pact. On 22nd June 1941 the pact was suddenly demolished by the Nazi invasion of the Soviet Union, codenamed Operation Barbarossa, which created drastic implications for the situation in Iran. “German attack on Russia has introduced entirely new element into situation,” wrote India Secretary Leo Amery three days later, “which affects our whole policy in Central Asia.” He classified Iran as being in “immediate danger from a German victory.” 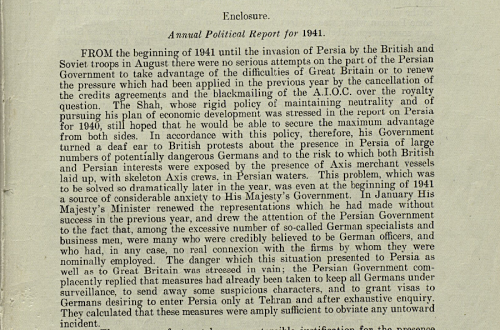 In the weeks following Germany’s attack on the Soviet Union, British and Soviet considerations over Iran escalated quickly. Of particular concern was the sudden vulnerability of Soviet oilfields in the Caucasus region. Should these fall to Germany, Iran would then become a vital component of the Allied war effort, meaning that securing their position there was of the utmost importance. Sir Stafford Cripps, the British Ambassador to the Soviet Union, reported on 8th July that Stalin felt that “the Germans and the Italians will try to carry out a coup against Baku oilfields, and against us in Persia and that it is urgently necessary that something should be done about it.” Far from perceiving Iran’s increased military strength as a threat, the Allies were now worried that Iran was too weak to resist German influence and potential invasion. Furthermore the supposedly neutral Shah was considered to be uncontrollable at best, a Nazi sympathiser at worst. The British and Soviet governments reached the conclusion that trying to influence Iran would not be enough. Slightly over two months after Operation Barbarossa, Operation Countenance was launched.