One of the national games of Burma is chinlone, or the cane-ball game, played with a ball made of six hoops of interwoven smoothly-cut cane or rattan. The idea of the game is to try to keep the chinlone up in the air for as long as possible by foot-work, and to not let it drop to the ground. The chinlone can be kicked by the instep, outer and inner sides of the foot, sole, heel and knee, but may not be touched with the hand. It can be played indoors and outdoors, in all seasons and by all ages, and is often played barefoot. Burmese people regard this traditional game as good for exercising leg muscles, building strength and developing body flexibility. 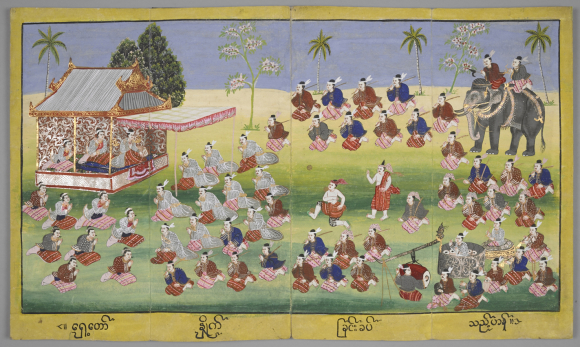 The illustration depicts a professional solo player playing chinlone in a court yard, while the king and queen in the pavilion watch the game. In the painting, the player has heavily tattoed legs, and his longyi (waist-cloth) is tucked up close round the middle, so that his legs may be quite free to play. In the game, the player sends the chinlone into the air again and again with decreasing force till he allows it to alight in the hollow of his shoulder, and he then rolls it down the back of the arm and jerks the chinlone off at his elbow to catch it on his knee. Up to seven chinlone may be tossed by master players; in this painting the player is playing with three chinlone. In the bottom right, musicians perform with a traditional orchestra and drum. British Library, Or 13291, f. 13

The game of chinlone can be played solo, but it more enjoyable with teams of six players. The team stands in a circle, the players standing three or four feet apart from one another and the chinlone is passed from one to another, by flipping it in the air using a succession of thirty techniques. There are rules for chinlone competitions between teams. The game exercises the body in a way that restores elasticity to the back and limbs, but it is believed that the game is good not only for physical exercise but also for mental control. 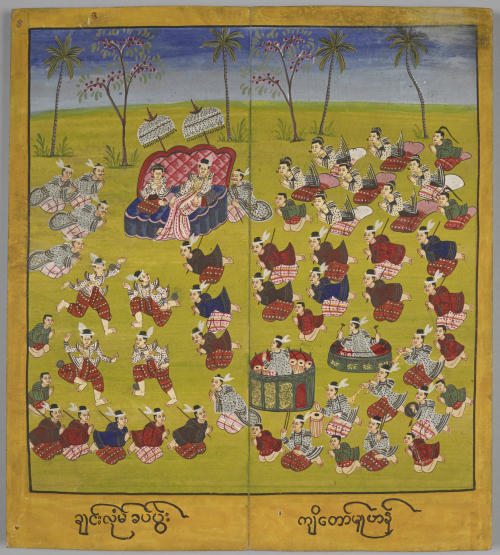 The above scene shows a chinlone tournament. Court musicians play in a traditional Burmese orchestra while the king and queen under the white umbrellas watch a chinlone game. Four players each toss a chinlone with their feet, without touching it with their hands, trying to keep it in the air as long as possible. They may also touch or flip the chinlones with their knees, ankles, soles and shoulders. British Library, Or 14551, f. 8 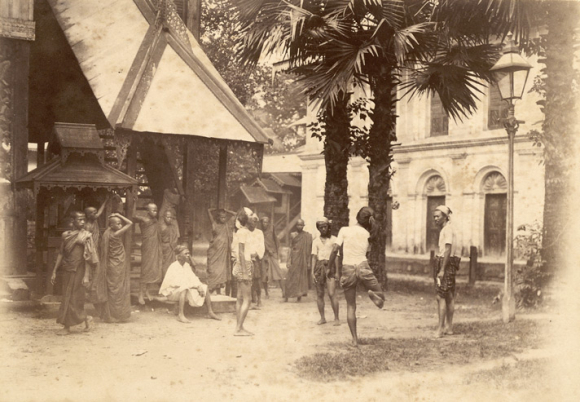 Four players play chinlone in the monastery compound, watched by a group of monks. Photograph of the national Burmese game of chinlone, taken by Watts and Skeen in the 1890s, British Library, Photo 430/15(63) 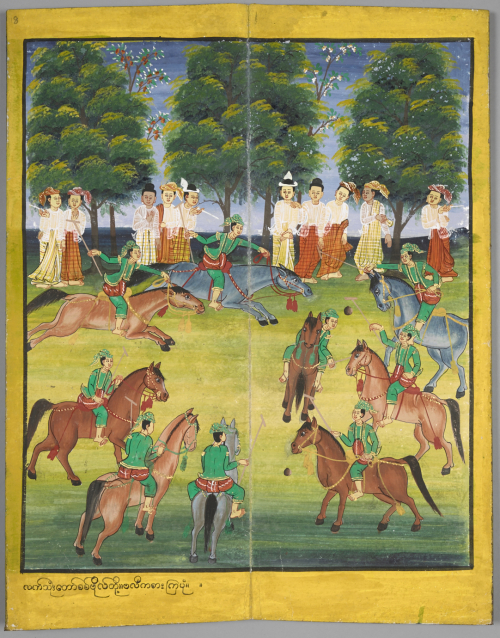 The above scene shows nine military men on horseback playing polo in a courtyard. According to  Burmese historical sources, this game was probably brought to Burma from Manipur in northeast India. British Library, Or. 6779, f. 8 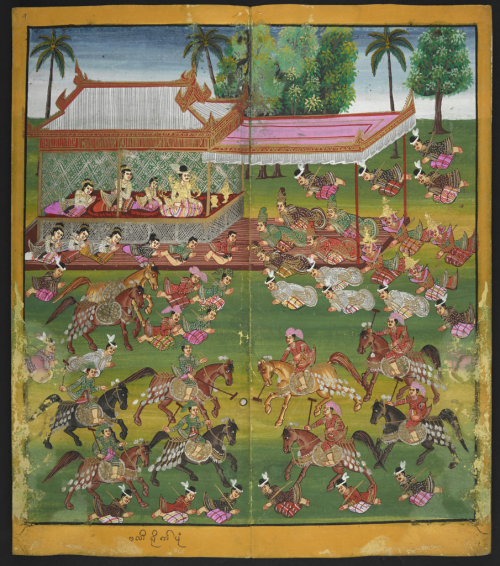 This painting depicts Burmese courtiers on horseback playing a game of polo, watched by the king and queen in the pavilion. The teams of four players on horseback try to hit the ball through the goal posts in order to score. In the illustration, the team wearing green (on the left) is competing against the team wearing red (on the right). British Library, Or 14963 f. 9 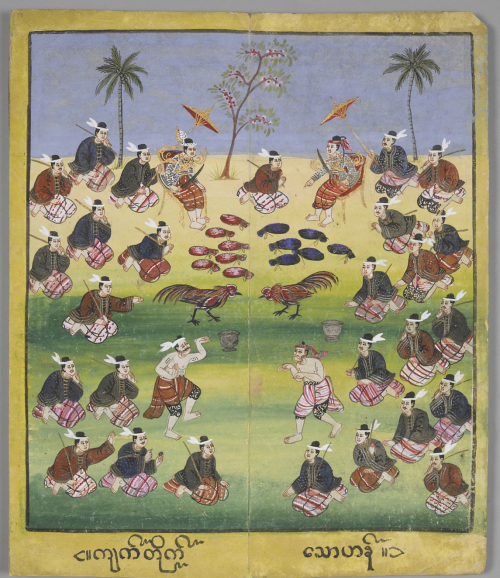 Shown here are two large long legged fowls fighting each other, and people betting. Cock fighting was a favourite game of village people in the past, and despite being condemned by religion, people still bet heavily on their birds. British Library, Or 13291, f. 15 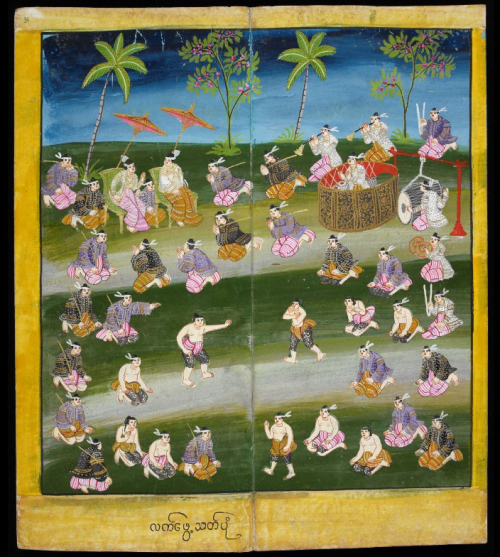 The above painting shows the traditional Burmese form of boxing. The two boxers have their longyis gathered up over their groins to their waists, in order to move their knees and legs easily. Tattoos can be seen on their legs, but other parts of their bodies are left bare. No gloves are worn in Burmese boxing; instead, the skill in this game lies in leaping into the air and kicking each other with their bare feet. On the left, the royals watch the boxing tournament, while to the right, musicians  entertain them. British Library, Or 16761, f. 31 An equestrian competition. This painting shows the king and queen watching a competition in martial skills. The competitors are princes, officials of ranks, and officers of the army, who are throwing spears from horseback at a gallop at targets placed on poles ranging from 15 to 50 or 100 cubits in height, standing at intervals one after the other. Under the monarchy, kings held equestrian competitions to select the best soldiers for the cavalry. British Library, Or 14963, f. 10

All the scenes of games in these Burmese folding books are painted in water colours and enclosed in yellow panels with a single line or a few words of explanatory text in Burmese script along the bottom border.

In Burma today, the game of chinlone can still be seen being played everywhere, by players young or old, male or damile, in fields and yards or in tournaments. Young girls play hop scotch at school or in playgrounds. Some seasonal festivals in Burma involve athletic competitions, with games such as climbing a greased pole, tugs of war, pulling a rope and pillow fights. In the mid-nineteenth century, western sports such as football, badminton, tennis, volleyball and golf were introduced to Burma.