One of the most unusual objects held in the British Library’s Visual Arts collection is an oversized silver candelabra that was presented to Sir Henry Montgomery Lawrence (1806-57) as a ‘Testimonial’ from the ‘Friends of the Panjab’ in 1856. Lawrence was appointed as the British Resident in Lahore in 1846 and was the President of the Board of Administration for the Affairs of the Panjab. The Testimonial is currently on loan and featured at the exhibition Empire of the Sikhs at the Brunei Gallery, London which runs from 12 July – 23 September 2018. 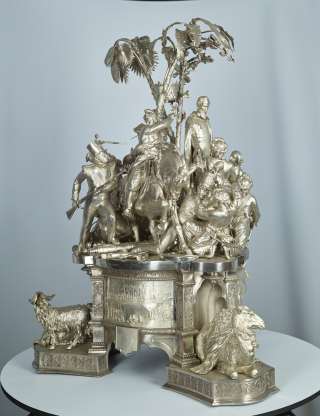 The Lawrence Testimonial, by Hunt and Roskell after the design and model of Alfred Brown, 1853-56. British Library, Foster 1075

Henry Lawrence started his career as an army officer of the East India Company. He was trained at the Company’s Addiscombe College in south London and travelled to India when he was 16 to join the Bengal Artillery. Lawrence was in fact born in Ceylon and would spend the majority of his life in the subcontinent. From the onset of his career, he was keen to develop his linguistic skills and would become fluent in Persian, Hindi and Urdu. His language skills would prove to become useful and he was appointed as an assistant revenue surveyor for the revenue survey of India in the north-western provinces based in Moradabad from 1833. From the 1840s, Lawrence’s career shifted to a more political nature. In 1840, Lawrence was formally appointed as Assistant to the Governor-General's Agent for the Affairs of the Panjab and the North-West Frontier. In 1843, Lawrence became the Resident at the court of Nepal. Following the First Anglo-Sikh War of 1845-46, Lord Hardinge appointed Lawrence as Agent at Lahore and subsequently the British Resident. Following the annexation of the Panjab in 1849, he served as President of the Board of Administration for the Affairs of the Panjab. According to the Illustrated London News (Feb 16, 1856), ‘this magnificent testimonial was projected in the year 1853 for presentation to Sir Henry Montgomery Lawrence K.C.B. … upon the occasion of his voluntary relinquishing of the above appointment [President of the Board of Administration for the Affairs of the Panjab] for the no less honourable and important post of Governor-General’s Agent in Rajpootana.’ The Testimonial was in the Lawrence family’s collection until 1949, when it was deposited as part of the wider Lawrence archive to the India Office Records and Private Papers collection by Sir John Lawrence; shortly after the acquisition, the Testimonial was sent on long term loan to the National Army Museum and only returned to the Library in 2015. Tarnjeet Singh Padam, Leading Library Assistant at the British Library, volunteer for the UK Panjab Heritage Association, and a contributing curator for Empire of the Sikhs, located the Illustrated London News article which now provides the documentation regarding the circumstances of production and the symbolic significance of the multiple vignettes presented in this elaborate testimonial.

According to the Illustrated London News: ‘The figure on the summit represents India; beneath, in bassi rellievi, are five reclining Deities, representing the rivers of India. The branches, ornamented in the Indian style, carry twelve lights. The palm, plaintain, and the fig-tree encircle the shaft. On the base is a grand composition of figures, divided into three groups. The first is typical of the state of anarchy which existed in the Punjab previously to the introduction of British rule. One of Runjeet Singh’s body guard is attacked by a hill man-a dismounted irregular horseman lies dead on the ground, and above him is a wounded Akalie. The second group represents the conflict between the British and the Sikh forces which resulted in the conquest of the country by the former. The figures introduced are a Sikh irregular horseman mounted, opposed to by a British foot solider, and a Sikh artilleryman contending with a dismounted trooper. The third group represents the pacification of the Punjaub. Sir Henry Lawrence is represented in the act of receiving from an Afghan villager and a Sikh Chief their arms; in exchange for which he is about to present them with different implements of husbandry, held by Industry and Peace, which are represented by two female figures.’ 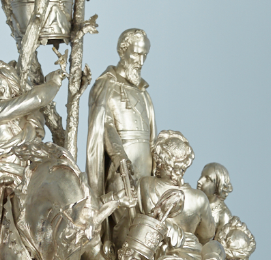 ‘The entablatures on the three sides of the Testimonial contain respective representations; - firstly, of the sacred Tank at Amritsar (the Pool of Immortality), with the Sikh temple in the centre; secondly, of Sir Henry Lawrence, with the Maharajah of the Punjaub and Chieftains seated in Durbar at Lahore, arranging for the payment of the troops, who were in a state of mutiny; and, thirdly, the establishment of the Lawrence Asylum in the Himalaya, for the children of European soldiers – allegorically represented by Benevolence under the guidance of Wisdom-removing the children from the plains to the salubrious regions of the Himalaya. At the angles are the Brahmin Bull, the Cashmere Goat and the Camel.’

In 2000, the descendants of Henry Lawrence donated to the British Library the Lawrence Album, which contained 66 drawings, prints and cut-outs, along with 35 photographs connected with the life of Henry Montgomery Lawrence (1806-1857) and Honoria Lawrence, née Marshall (1810-54), presented to their daughter Honoria Letitia (1850-1923) in 1859 by her aunt and godmother Charlotte Frances Lawrence (1814-1885). The album includes further information regarding the design of the testimonial, including a set of illustrations showing the original design by Alfred Brown which was manufactured by the silversmith Hunt and Roskell. 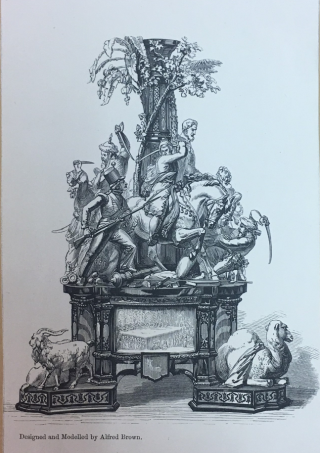 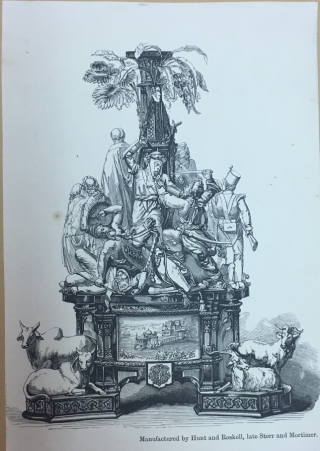 Illustration from the Lawrence Album with the vignette of the Golden Temple at Amritsar on the base, c. 1853-56. British Library WD 4464