The British Library holds a rich collection of Malay manuscripts originating from all corners of maritime Southeast Asia, covering subjects as diverse as literature, history, law and aspects of religious thought and life. But we still know relatively little about the practicalities of how manuscripts were prepared, written, stored and used in the Malay world. What did Malay pens look like? What inks were used, and how were they made? How were the sheets of paper prepared? While libraries are certainly treasure troves of books, the paraphernalia pertaining to writing cultures, which might help to answer these questions, are more likely to be found in museum collections. Last week, after attending a workshop in Leiden at the Volkenkunde Museum on ‘Imagining Islamic Art of Indonesia’, I visited Bronbeek, a beautiful former royal estate in Arnhem which houses a home for invalid soldiers and the museum of the Royal Netherlands East Indies Army (Koninklijk Nederlands-Indisch Leger, KNIL), and thus holds important collections from Indonesia. More recently, Bronbeek Museum has also taken in Indonesian artefacts from other, now defunct, museums in the Netherlands, including from the Ethnographic Museum in Nijmegen, which closed down in 2005, and from the Nusantara Museum in Delft, which shut its doors in 2013. From Nijmegen Bronbeek acquired the collection of Jean Beijens (1835-1914), a soldier in the Dutch East Indies from 1850 to 1861, who served mainly in Borneo. Beijens probably started collecting in Indonesia, but his collection was mainly built up through purchase after his return to the Netherlands, and in 1912 was presented to the city of Nijmegen.

At Bronbeek Museum I was delighted to have the opportunity at last to meet the Director, Pauljac Verhoeven, with whom I have corresponded for nearly twenty years, and also curator John Klein Nagelvoort, whose deep interest in Aceh I share. Paul and John kindly gave me a behind-the-scenes tour of the museum’s collections, bringing out the small number of Malay manuscripts held in the museum, including a copy of Mawa‘iẓ al-Badi, ‘Fine Advice’, an anonymous work attributed to the 17th-century Acehnese scholar ‘Abd al-Ra’uf bin ‘Ali al-Jawi, also known as Abdul Rauf of Singkil, other copies of which are known to be held in collections in Aceh, including the Yayasan Ali Hasjmy in Banda Aceh. 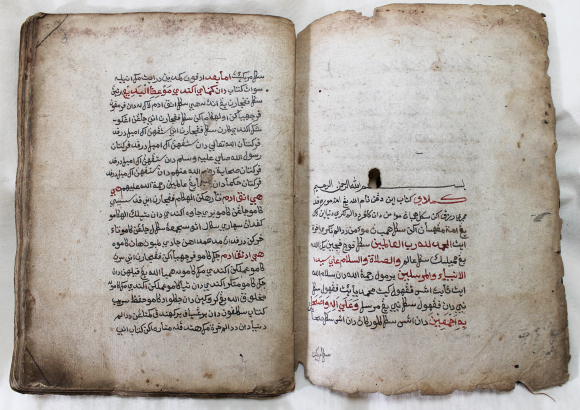 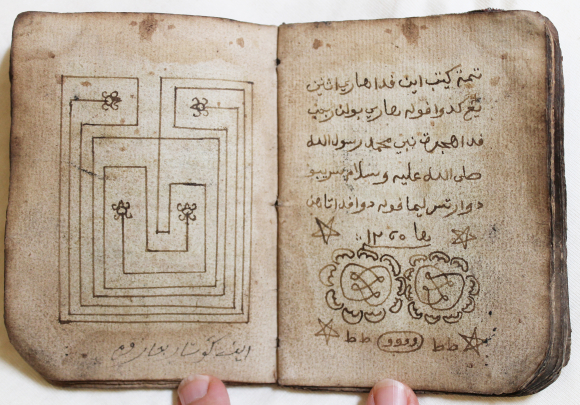 Small Malay manuscript showing, on the right, the final page of Hikayat Nabi Bercukur, 'The story of the Prophet's shaving', dated 20 Rejab 1252 (31 October 1836), with talismanic drawings including the pentagram and the Sanggah Siti Fatimah; that on the left is labelled Ini kota raja rumah, 'this is the royal fort and residence'. Bronbeek Museum, 2004/00-130

As can be seen in the manuscripts above, rubrication – the use of red ink for highlighting certain words – was a common practice of Malay scribes. Red ink is used for a variety of textual purposes: to emphasise certain words, to indicate the start of a new section within the text, or to signal portions written in Arabic, while in manuscripts of the Qur’an, the surah headings are normally written in red ink. Thus metal pencases found in Southeast Asia usually follow the Ottoman model of including an ink well with two chambers, one for red and one for black ink. The Bronbeek Museum has a fine brass example shown below, from the Beijens collection and known to have been acquired in Aceh, which is perhaps of Ottoman manufacture, for tiny stamped seals bearing the maker’s name are visible on the casing. Of particular interest in this pen case is that each ink chamber still contains remnants of what appear to be cotton threads, which John Klein Nagelvoort suggested may have helped to prevent the ink evaporating too quickly. 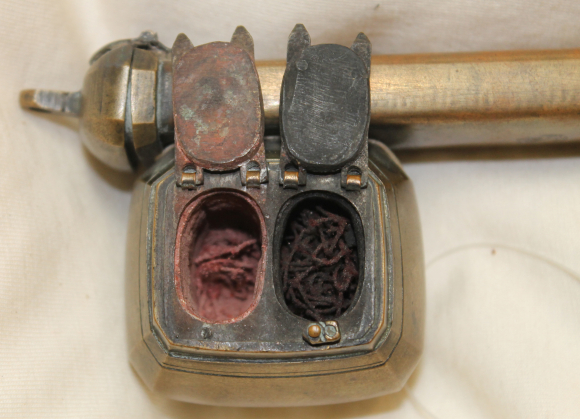 The Bronbeek Museum also contains a pen, said to be from Java, and from the Beijens collection and therefore dating from before 1912, and most likely from the 19th century. Although some museums in Southeast Asia occasionally display writing implements, these are usually modern replicas, and this is the first definitely 'old' pen I have seen from the Malay world.  Carved from a twig or stalk with a sharpened point, the stem of the pen is hollow and was filled with cotton threads, presumably to act as an ink chamber. 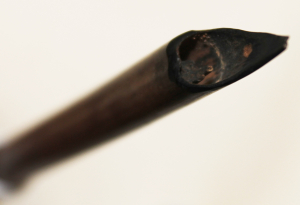 Also from the Beijens Collection are two rehal, carved wooden Qur’an stands. One finely carved example can be identified as originating from Aceh on the basis of the interlocking scroll design, a characteristic motif of illuminated manuscripts from Aceh. 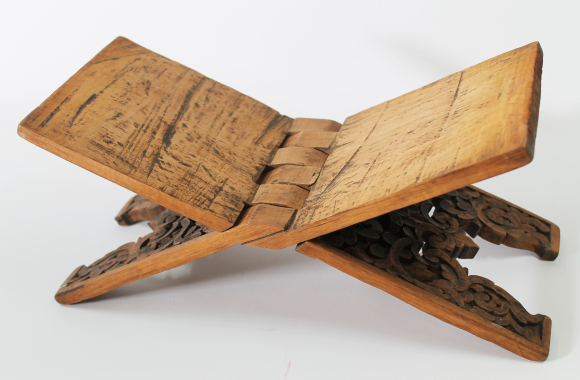 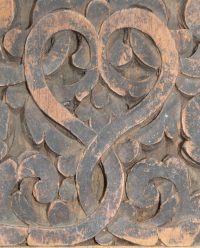 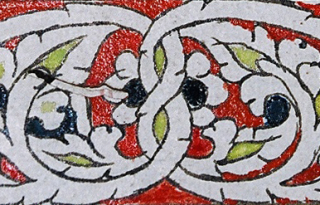 Carved wooden Qur'an stand (rehal), from Aceh, with (below left) a detail of the 'interlocking scroll' motif, also found (below right) in a Qur'an manuscript now in the National Library of Malaysia. Bronbeek Museum, Beijens Collection, 42332.

The exhibit in the Bronbeek Museum which in fact I had been most looking forward to seeing was not a manuscript, but a cannon. When the Dutch invaded Aceh in 1873, sparking off a war which lasted over thirty years, they captured the royal palace of Aceh with its historic collection of cannon, many of which were then brought back to the Netherlands and presented to King William III, who placed them in Bronbeek. These included three large Ottoman cannon which were probably cast in Gujerat, and which had arrived in Aceh following direct contacts with Istanbul in the 16th century. But of particular interest to me was an English cannon, presented to great ruler of Aceh, Sultan Iskandar Muda, by King James I, following Iskandar Muda's request for 'a great gun wherein a man may sit upright’.  That ‘great peece’ was made in London in 1617 by Thomas and Richard Pit, and sent out to Aceh. But as Paul Verhoeven explained to me, this was purely a vanity piece, not designed for actual use: the metal shell is so thin that if it had ever been used to fire a cannon ball of the size commensurate with its bore, as shown alongside in the photograph below, the gun would actually have exploded. 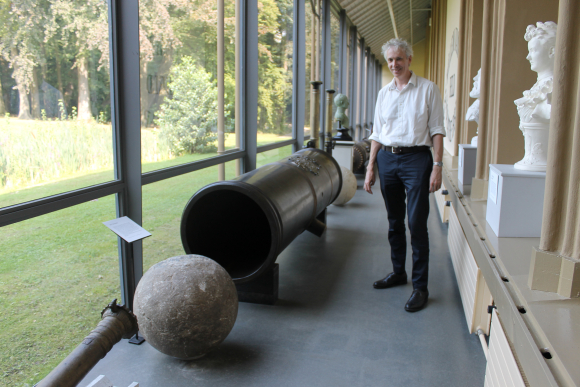 Paul Verhoeven, with the great gun sent by James I to Sultan Iskandar Muda of Aceh in 1617, which was then captured by the Dutch in 1873 and brought to Bronbeek.

The crowned arms of James I, 'Jacobus Rex', on the cannon sent to Iskandar Muda.

Inscription naming the makers of the great gun, 'this peece', Thomas and Richard Pit, 1617.