The story of the warlike and amorous exploits of Amir Hamza, as he and his companions fight against the enemies of Islam, was popular throughout the Muslim world. Many fine illuminated copies of the Persian version, Hamzanama, are known, and shown below is a detail from a large multi-volume copy commissioned in 1562 by the great Mughal emperor Akbar, a task which took 15 years to complete. 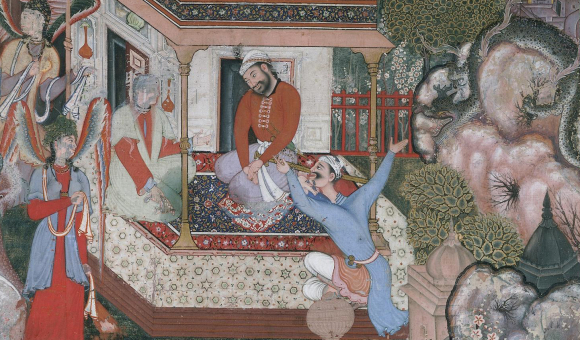 In this illustration, Hamza is deep in coversation with a demon called Hura, unaware that a dragon is approaching from behind rocks to the right. Hamza's close companion, 'Umar Umayya, gesticulates wildly to warn Hamza. Victoria & Albert Museum, IS. 1505-1883

The Hamzanama probably spread throughout Southeast Asia initially in a Malay garb before being translated into other regional languages, including Javanese, Bugis and Makasar. A famous episode in the Malay chronicle of the kingdom of Melaka, the Sulalat al-Salatin or Sejarah Melayu, recounts how the night before Melaka was attacked by the Portuguese in 1511, the nobles ask the Sultan Mahmud Shah for the Hikayat Muhammad Hanafiah - the bloodthirsty tale of the many battles of Muhammad Hanafiah, a half-brother of the Prophet's grandsons Hasan and Husayn, set in the early days of Islam - to be recited to give them courage. The sultan tested their resolve by suggesting that they did not merit the tale of this great warrior, and offered them instead the Hikayat Amir Hamza as a more appropriate measure of their courage. But the Malay nobles protested and persisted, and finally Sultan Mahmud Shah granted their request for the recital of Hikayat Muhammad Hanafiah.

While the Hikayat Muhammad Hanafiah may have been associated with a higher level of valour in Malay tradition, it is the story of Amir Hamza that is far more popular in Javanese literature. In Java, the hero Amir Hamza was granted the ancient Javanese title Menak, and this title is now applied to the whole cycle of Islamic epic tales, which were soon localised according to Javanese literary conventions. Thus in the Menak cycle Amir Hamza is accorded two panakawan companions, Marmaya (based on Amir Hamza's lifelong friend 'Umar Umayya in the Hamzanama) and Marmadi, who are mentors and cunning servants of the hero such as are always found in wayang shadow puppet dramas.

The two Javanese manuscripts which have just been digitised both tell the story of Menak Amir Hamza in the Javanese language, but in two different scripts. MSS Jav 45 is written in Javanese script, derived from an Indian (late southern Brahmi) prototype, and is read from left to right. This manuscript was copied by Mas Ajĕng Wongsaleksana of Jipang, and is dated 9 Rabingulakir, with chronogram panca tri pandita jalma giving the year  in the Javanese era as 1735, equivalent to 4 June A.D. 1808. The text is written in verse and comprises 85 cantos. 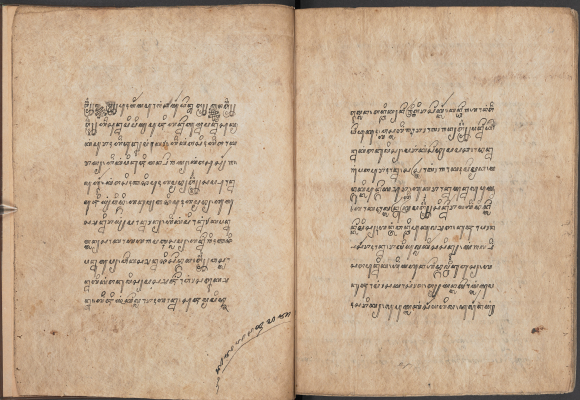 The second manuscript of Menak Amir Hamza, MSS Jav 72, is written in pegon script, namely Arabic script with the addition of seven letters representing consonantal sounds needed for Javanese but not found in Arabic, and is thus read from right to left. The first two pages are set in decorative frames ruled in black ink, with a diamond superimposed on a rectangle. This is a quintessential Javanese preferred form for double frames, comprising an elegant assemblage of ruled vertical, horizontal and diagonal lines. Very similar frames are found in a Javanese Qur’an manuscript also held in the British Library, Add 12343. 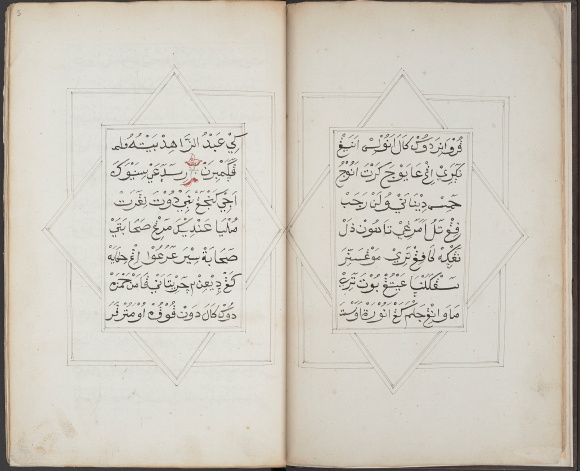 A third copy of the Menak Amir Hamza from Yogyakarta in the British Library collection, Add. 12309, is also being digitised as part of the current project. From the introduction it is clear that this book was written for Ratu Ageng (c. 1730-1803), a wife of Sultan Hamengku Buwana I and the mother of Hamengku Buwana II, some time after 1792. As this manuscript is perhaps the largest single volume Javanese manuscript known, consisting of over 3000 pages written in pegon script, there are some technical challenges to be overcome before this copy can be made available online, but we hope to publish it soon. Watch this space! 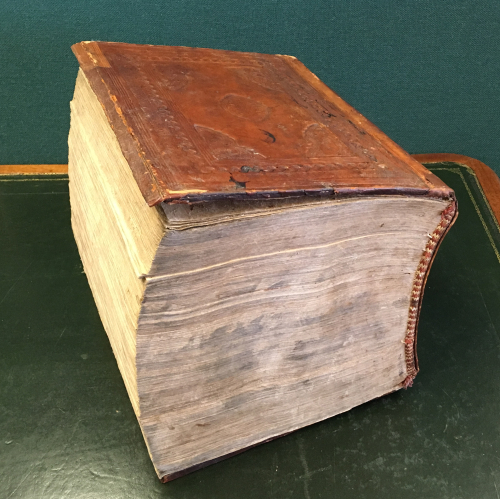 Theodore G. Th.Pigeaud, Literature of Java.  Catalogue raisonné of Javanese manuscripts in the Library of the University of Leiden and other public collections in the Netherlands.  The Hague: Martinus Nijhoff, 1968. 4 vols. Volume 1, pp. 212-215.