Today's guest blog is by Vivek Gupta, a historian of Islamic and South Asian art, currently working on his PhD thesis “Wonder Reoriented: Manuscripts and Experience in Islamicate Societies of South Asia (ca. 1450–1600),” at SOAS University of London, History of Art and Archaeology. 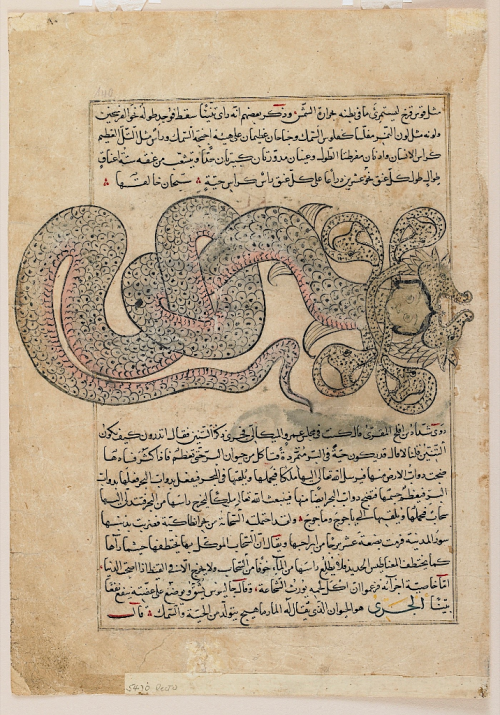 The Wonders of Creation and Oddities of Existence (‘Ajā’ib al-Makhlūqāt wa Gharā’ib al-Mawjūdāt) of Zakariyyā’ ibn Muḥammad al-Qazwīnī (1203-1283) had many lives after it was first written in thirteenth-century 'Iraq (for an early fourteenth-century copy in the British Library collection see Colin Baker's post The London Qazwini goes live). In sixteenth-century India, Qazwini’s Arabic cosmography, or encyclopedia of the heavenly and earthly worlds, became a veritable hit. Numerous Arabic cosmographies and related Persian works and translations made in India attest to this. The British Library holds at least six such illustrated manuscripts made in the peninsular Deccan region of India. Notable among these manuscripts is an Arabic model created in Bijapur in the 1570s, three copies of which exist at the BL (IO Islamic 845, IO Islamic 1377, Or. 4701); several more are housed in collections including the Chester Beatty Library (CBL) and the Raza Rampur Library. Here, I introduce some art historical parameters of this model and consider the possible factors that led to its immense popularity—to go viral.

The Past and Present of the Deccan Qazwini Manuscripts
The ‘mother’ of the Deccan Qazwini manuscripts, dubbed the “Sarre” Qazwini because of its former owner, the German Orientalist Friedrich Sarre (1865-1945), is a subject of debate (fig. 1). In the past few decades, American and European scholars have attributed this manuscript everywhere from northern Iraq, or eastern Turkey around 1400, to mid-sixteenth century Bijapur. In light of these varying attributions, I raise two points about the Sarre Qazwini vis-à-vis its Indian offspring. First, the style of its illustrations precedes painting of the early-modern Deccan. Second, the Sarre Qazwini’s paintings derive from an idiom that did not develop in India and are in line with a style associated with fifteenth-century Iraq or eastern Turkey. The Deccan Qazwini manuscripts thus implicate the circulation, or knowledge of an earlier codex to India. Because they harken back to the Sarre Qazwini type, these manuscripts demonstrate an impulse to archaise in the sixteenth-century Deccan.

If the British Library’s Deccan Qazwini manuscripts gesture to the past, other wonder compendia firmly rooted in sixteenth-century Bijapur express the artistic innovations of their present context. Qazwini’s Wonders of Creation contributed to a dynamic genre consisting of Persian texts and numerous other works that compiled both manmade creations and natural marvels. For instance, before IO Islamic 845 was copied on December 3, 1571, the Chester Beatty Library’s Stars of Sciences (Nujūm al-‘Ulūm) (fig. 2) was completed in Bijapur on August 16, 1570. The several Persian copies of the Stars of the Sciences illustrate both Indic and Islamicate cosmographical sciences and often draw equivalences between these knowledge systems as well as other traditions foreign to India. Beyond the cosmic wonders, the Stars of the Sciences devotes lengthy chapters to manmade creations ranging from perfumes to poetry. A broad corpus of wonder compendia marked by internal diversity thus rose in production in the sixteenth-century Deccan.

Variations on the Deccan Qazwini Manuscript Model
The Deccan Qazwini manuscripts are relatively sizeable and standardised books (fig. 3). Their written surface measures roughly 25.5 x 19 cm and contains 22 lines of black naskh script. A larger script often inscribed in red is used for section headings. The rulings, frontispieces, and illustrations are all executed in gold ink. The new bindings of IO Islamic 845 and Or. 4701 distort the original dimensions of these manuscripts, though the standard deviation for current measurements across this group is a mere .1 or .2 cm. The text of all these manuscripts is consistent, although it varies from Ferdinand Wüstenfeld’s 1849 published edition of Qazwini, which was based exclusively on works in German and Austrian collections. This may be because the manuscripts Wüstenfeld based his edition upon were not of Indian origin.

Although the dimensions of these manuscripts establish their homogeneity, their differences shed light on the processes of their copying. Among all the Deccan Qazwini manuscripts, there is not a single pristine copy. Each of them has lost some of its folios or suffered damage impeding our ability to reconstruct the contents of an original or complete codex. Examining the format of these pages reveals some critical differences. 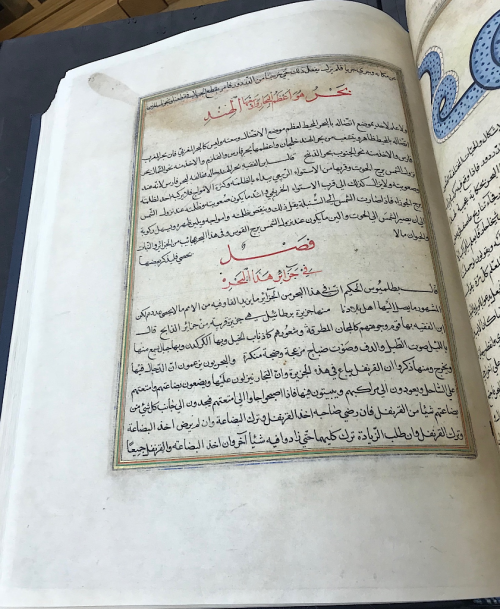 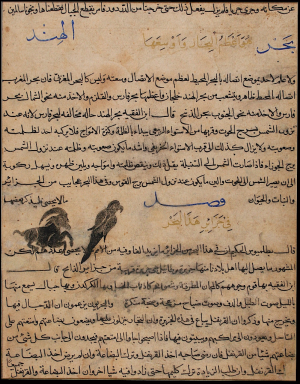 While all the illustrations in the Deccan Qazwini manuscripts are virtually identical in size and colour, they diverge in some illuminating ways. Let us look at a section within the larger chapter concerning the sphere of the bodies of water. In the heading concerning the islands of the Indian sea, the formats of the corresponding folios in IO Islamic 845 (f. 73r) and Or. 4701 (f. 73r) are nearly identical (fig. 3). The headings are in red naskh centred on the page. The first heading, “the Sea of India / baḥr al-hind,” has the phrase, “it is the greatest and widest of seas,” interspersed between the main title words “baḥr” and “al-hind.” Then, the word faṣl or chapter in the second section heading, “The Chapter on the Islands of this Sea / faṣl fī jazā’ir hādhā al-baḥr” interrupts the space of the black text above it. Though differing from the corresponding folio (59v) of the Sarre Qazwini, these subtleties in page format recur within the Deccan Qazwini manuscript tradition. The corresponding folio from the Chester Beatty Library’s CBL Per 128 (fig. 4) varies on this model. At first glance CBL Per 128’s corresponding folio (70v) has roughly the same format as the BL manuscripts. However, instead of red ink for headings, CBL Per 128’s section titles are executed in blue and gold. The CBL page also bears a bird and ram-like animal adjacent to the second heading on the page foreshadowing other marvels of the Indian islands. 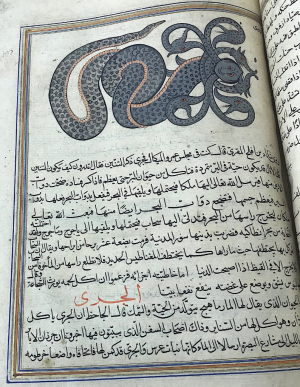 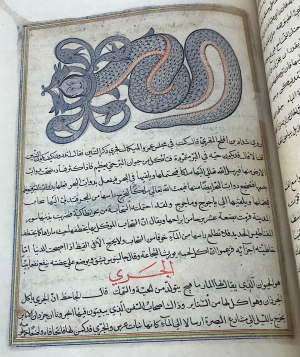 Another distinction is visible in BL Or. 4701, f. 88r and IO Islamic 845, f. 88r’s illustrations of dragon fishes (al-tannīn) (figs. 5 and 6). On the left, BL Or. 4701 shows the monster facing right, and on the right IO Islamic 845 depicts it facing left. The length of both dragons is 16 cm. CBL Per 128’s depiction of a dragon fish (f. 85v) also faces left and measures only .2 cm more than the British Library groups’ corresponding images. Looking to the earlier model, the Sarre Qazwini’s dragon fish faces right (fig. 1). This was probably produced by a pounce of some kind, since whether the dragon fish is oriented right or left, they are mirror images of each other. All of this suggests that the Deccan Qazwini group was cohesive and requires close examination to apprehend how different artists and scribes rendered this text and preserved the tradition.

Why this Viral Production?
In a world where a meme can go viral, electronically, in seconds we might be inclined to believe that this is only possible in the 21st century. The case of the Deccan Qazwini manuscripts suggests the contrary: it could and did happen in past, albeit achieved by different means. Over the course of studying roughly 60 illustrated Persian, Arabic and other vernacular compendia of wonders I have probed the ways by which this manuscript tradition was transformed from its genesis in Arab and Persianate contexts, to South Asia. By the sixteenth century, I noticed a rise not only in the production but also in the diversity of these works. A fuller understanding of this surge in production awaits study, especially as the number of wonder books from this period is necessarily skewed by what survives. I speculate that anxieties about the end of the first Islamic millennium in 1591 may be one reason. One would want to hold tight to a book depicting all of God’s creations if the apocalypse were looming. The Safavid and Ottoman worlds witnessed a rise in the production of the fālnāmah, or book of omens, right around this time perhaps for similar tensions about the millennium as documented by the landmark Falnama exhibition organized by the Freer|Sackler Galleries in 2009.

The Deccan Qazwini manuscripts also prompt unanswered questions as to why so many of these same archaising books were desired. If they served as a stock handbook for intelligentsia, these multiple owners perhaps travelled far and wide with their books, and increased the circulation of the model. It is for this reason that they have come to the British Library following different itineraries. The lack of finish to some of these manuscripts and their subtle distinctions suggest that they were not made at the same time. Further research on Deccan manuscript production will surely turn up some answers. For now, however, it is becoming increasingly clear that the archaic form of the British Library group occurred in tandem with other innovations in the literature on the wonders of the universe.

Posted by Ursula Sims-Williams at 5:49 PM