A Vietnamese Lord’s letter to the East India Company

During the Later Lê dynasty (1428-1788), Vietnam was effectively divided into two parts. For over two centuries – from the middle of the 16th to the middle of the 18th centuries – the Trịnh Lords ruled the northern part (referred to in Vietnamese history as Đàng Ngoài) and the Nguyễn Lords had power over the southern part (Đàng Trong) of Vietnam, while the Lê emperors had no real political power at all.

The oldest manuscript in the Vietnamese collection at the British Library, from the founding collection of Sir Hans Sloane of 1753, was probably written by the Trịnh ruler of Tonkin in the late 17th century (Sloane 3460). It is a long scroll of yellow paper, beautifully illuminated in silver, written in the Vietnamese language in Han Nom (adapted Chinese) characters, and bearing a large square red ink seal. Unfortunately, the first part of the scroll is missing, and some of the characters in the remaining part are illegible, and it is therefore impossible to establish the precise date of this manuscript.

At my request, Dr Li Tana, of the College of Asia and the Pacific, Australian National University, kindly examined images of the manuscript in April 2018. She has transcribed and translated its contents, and is of the opinion that it was probably written under the command of Trịnh Tac (r. 1657-1682) and was sent to the English East India Company (EIC) some time in 1673, following the arrival in Tonkin in 1672 of the first EIC ship. Foreign traders always sought assistance from local powers to facilitate their commercial missions, and in return the local lords also tried to benefit from these foreign visitors, especially their technical know-how on modern technology, as the content of the Trinh lord’s letter clearly demonstrates:

…[overseas merchants visiting us] have been many but only Holland has come … (three characters not legible). It has acted in both friendship and righteousness. [They] sometimes offer pearls and beautiful presents and sometimes send craftsmen who are specialised in cannon casting. This kindness is above all rulers.  Although your country has only just begun interactions with us, we treat all countries equally with compassion and good will. Recently your head trader brought one iron cannon and two bronze cannons. The bronze ones broke as soon as they were tested. [They] were definitely not of solid and excellent quality. [We therefore] have returned them to the ship captain but he has not yet taken them back. If you are arranging for ship[s] to come next year, [please] bring amber either in pieces or stringed together with real pearls for us. We will pay [you] accordingly right away. [This] will be of benefit to both sides. [Please] also send cannon casting craftsmen so that the craftsmen from Holland cannot monopolise this skill. This way our friendship will last forever. [We are sending] 560 catties of raw silk for the two iron cannons which we received last year. Please buy for us 50 hoc (= 50 kilogrammes) big sized amber, plus 5000 pieces of stringed amber. Written in the mid-winter.
(Translated by Dr Li Tana, edited by Dr Geoffrey Wade, April 2018) 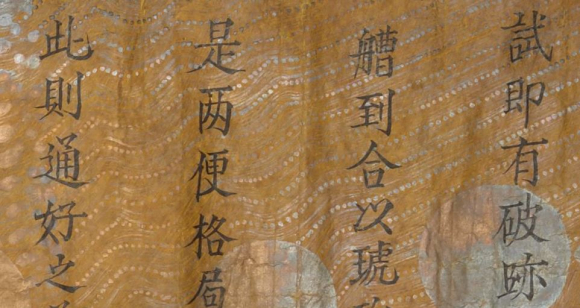 Detail of the text of the letter, with silver illumination on a yellow ground. British Library, Sloane 3460

By the early 17th century, commercial competition among European mercantile states had expanded to Asia, and Southeast Asia was targeted for its rich resources. Vietnam was located in a commercially strategic maritime location and many European traders started to visit the kingdom to seek commercial opportunities. The East India Company (EIC) sent its first delegation from its Japanese base of Hirado to Vietnam in as early as 1613 (Le Thanh Thuy 2014: 62) amid vigorous competition with the Dutch East India Company (VOC) and other western European nations. Hirado had been an important port of call for ships between Japan and the Asian mainland since the Nara period, and both the EIC and the VOC had ‘factories’ (trading posts) there.

In 1672, the East India Company sought to establish a factory in Tonkin, as a liaison base for the export and import of British traders’ goods to China, Japan and maritime Southeast Asia (Thuy 2014: 63). On 25th June 1672, the EIC ship The Zant was sent from Bantam, in Java, to Tonkin, with William Gyfford and five other EIC employees, to seek the establishment of commercial relations with Tonkin. However, it was not until 14th March 1673 that Gyfford had an opportunity to meet Trịnh Tac. After receiving the gifts and letter of the Bantam Council, the Trinh lord only allowed the EIC to set up their factory at Phô Hiến, but not at the capital of Tonkin as the EIC mission had hoped (Thuy 2014: 64). Even though we can’t be certain that this manuscript letter was sent by Trịnh Tac, it is still an important piece of historical evidence, as it reflects the fluidity and versatility of commercial and political affairs in the changing world of the mercantilism of the 17th century, and the arrival of colonialism in Asia.

The letter, Sloane 3460, has been fully digitised, and is currently on display in the Southeast Asia case outside the Asian and African Studies Reading Room in the British Library, alongside other Southeast Asian manuscripts from the collection of Sir Hans Sloane.

With thanks to Li Tana and Geoffrey Wade.