A recently digitised Burmese manuscript in the British Library (Or. 14005) contains images of different types of royal barges and boats, illuminated in red and gold. The barges are carved and decorated elaborately with figures of mythical creatures such as the garuda (bird), naga (serpent), and manuk siha (half-lion half-man), and some bear structures resembling palaces or pavilions. The paintings of the vessels are as finely excecuted as those of scenes found in other Burmese folding books but, unusually, this book has no captions at all. Nonetheless, each boat is so stylistically and symbolically distinctive that it can easily be identified. 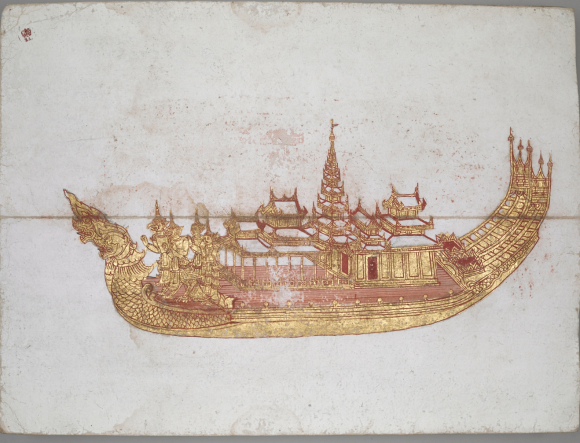 A Pyigyimon boat, which consists of two conjoined gilded boats, with a seven-tired roof (pyatthat). There are two separate dragon-headed hulls, while on the bow are figures of a garuda (mythical bird) and a naga (mythical dragon), with Sakka (a celestial king and the ruler of Tavatimsa heaven) standing between them. British Library, Or. 14005, f. 1 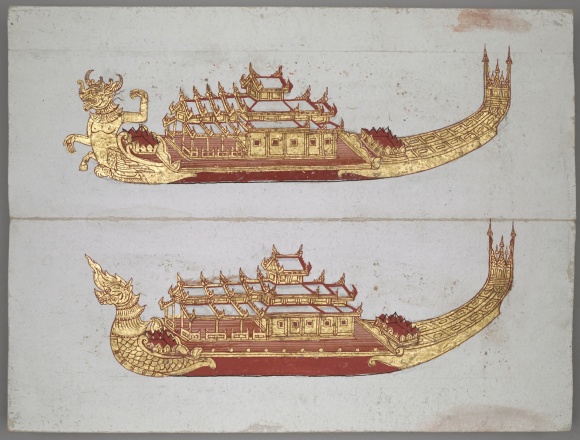 Shown above are the golden state barges Nawayupa and Nagadeva, for carrying ministers and royal officers. The Nawayupa golden barge (top) has the mane of a karaweik (mythical bird), the hump of bull, the tail of a nga gyin fish, two elephant tusks, the trunk of a makara (sea creature), two horns of a toe naya (mythological creature), two wings of parakeet, and a front and hind leg of a horse. The Nagadeva barge (bottom) is adorned with the figure of the snake king. British Library, Or. 14005, f. 7 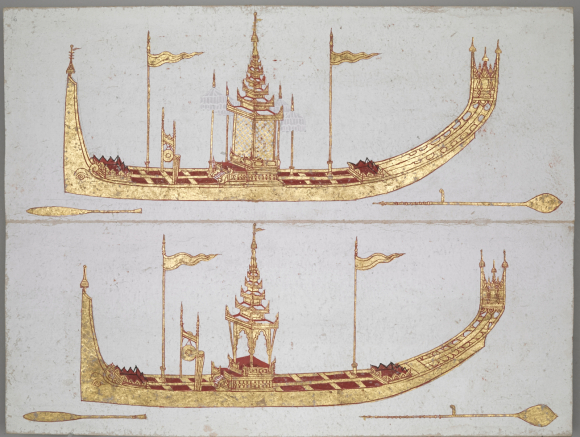 Hlaw ka-daw (above) are the king’s dispatch boats. They are gilded all over, even including the paddles, and the stern rises high up in the air. These boats carried canons, drums and gongs. British Library, Or. 14005, f. 16 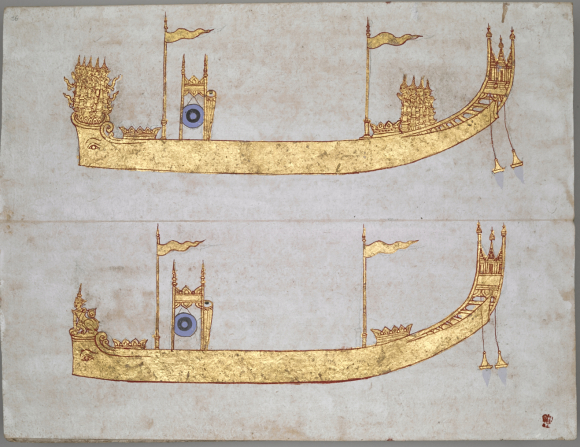 Shown above are the Nawaraja and Manuk siha boast. The Nawaraja boat (top) has figures of five Brahmas in the prow and four in the stern, in memory of the nine Brahmas who appeared on earth in the beginning of the world. The Manuk sika boat (bottom) is adorned with the figure of a mythical creature with a human face and hands, and the body and legs of a lion. British Library, Or. 14005, f. 36 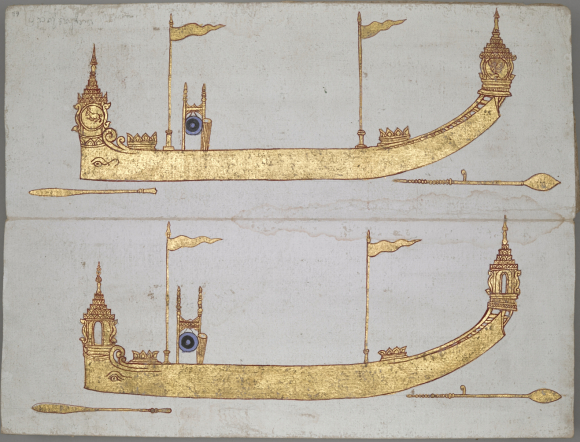 Pyi kone (top) is the king’s boat, with figures of the moon and the sun adorning the bow and stern. Lokabihman boat (bottom) is also for the king's use and has two pavilions, one at the bow and one at the stern. Or. 14005, f. 37 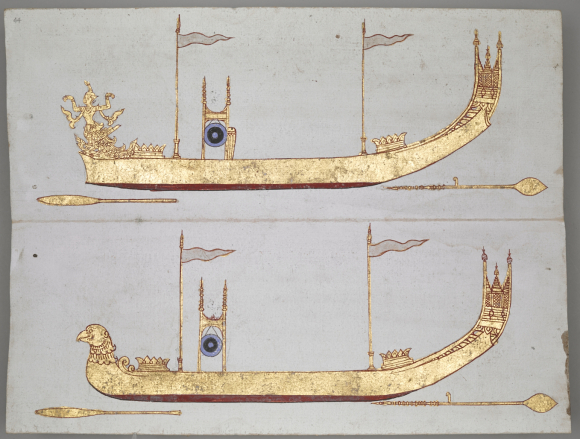 Among the variety of boats many were named from the places whence their models were taken, such as the Zimme, In-ma, Tha-byu, etc. Other notable boats were the Thingan-net and the Lin-zin boat, with a low bow and lofty stern. The Azalon or Azalompani boat had the figure of a goat with an aubergine in its mouth and its forefeet resting on the prow of the boat, and its two hind legs and tail at the stern.

Among the many festivals held throughout the year in Burma (Myanmar) is the Regatta festival which is held Burmese month of Tawthalin (late September) due to the favourable weather conditions. According to the Burmese chronicles, royal regatta festivals were held by eleven monarchs beginning with King Anaukphetlun (r.1605-28), and ending with King Thibaw (r.1878-1885), the last King of Konbaung dynasty (1752-1885). During the regatta, the king surrounded by his entourage would watch the event from his royal barge, which often headed the procession down the river. The king and his nobles and courtiers often raced each other in their boats, accompanied by the songs of the rowers. The very oars of the royal boats were gilded, and as the boats circled the spray flew from their blades, and the sun blazed upon their magnificence. High officials supervised preparations for boat races along the shore of rivers throughout the country, and these races were also regarded as good tests for improving the skills of the royal navy.

Racing boats in the river during the Regatta festival. In the foreground, the King and Queen watch from a grandstand on the bank. Or. 6779, ff. 9-12

Royal barge processions were held for the Coronation and other religious ceremonies on the Irrawaddy River or Ayeyarwady River. It is the main river of Burma, flowing from north to south through the centre of the country, and one of the great rivers of Asia. Burmese chronicles recorded that King Alaung Sithu (r.1112-1167) was a great traveller as he spent much of his time on water journeys.

This illustration depicts a royal water procession. The barge is tugged by golden Letpyi boats paddled by a full complement of oarsmen in the Irrawaddy River. People are gathered on the banks of the river to watch the royal barge and boats. British Library, Or. 14031, ff. 9-13

From 1975 to the present day, the Karaweik golden barge - based on the design of the Pyigyimon royal barge - has floated on the Kandawgyi Lake in Yangon. This barge is adorned with the figure of a karaweik  bird, and has a covered area with a pyatthat tiered roof.

Posted by Annabel Gallop at 4:56 AM