Buddhism Illuminated: Manuscript Art from Southeast Asia is a lavishly-illustrated book published  earlier this year by the British Library in collaboration with Washington University Press. The book aims to share many years of research on the British Library’s unique collection of Southeast Asian manuscripts on Buddhism, which illustrate not only the life and teachings of the historical Buddha, but also everyday Buddhist practice, life within the monastic order, festivals, cosmology, and ethical principles and values.

Extracts from the Tipitaka in Pali language, written in Khmer script. Folding book from Central Thailand, second half of the eighteenth century. British Library, Or 14027, f. 4

The first two chapters, which introduce the outstanding art of Southeast Asian Buddhist manuscripts as well as the Life of the Buddha, were discussed in our previous blog. The third chapter of the book focuses on the teachings of the Buddha, or Dhamma, also known as the “righteous way”. Gotama Buddha spent more than half of his life walking around northern India over 2500 years ago, teaching his ever growing group of followers. Shortly after the Buddha’s parinibbana and physical death, the first Buddhist council was held at Rajagaha. Five hundred of the most senior Buddhist monks are said to have convened to recite and verify all the sermons they had heard during the Buddha’s forty-five years of teaching. They began to systematically arrange and compile the Buddha’s teachings called Tipitaka, or the 'Three Baskets', which include the Sutta Pitaka (the basket of discourses), the Vinaya Pitaka (the basket of discipline and monastic rules), and the Abhidhamma Pitaka (the basket of higher teachings of the Buddha). Five more councils were held over the centuries, with the most recent one taking place in Rangoon at Kaba Aye Pagoda from May 1954 to May 1956 to commemorate the 2,500th anniversary of the Buddha’s parinibbana.

This manuscript, written in Pali - the canonical language of Theravada Buddhism - in yellow Burmese square characters, is inscribed on 49 palm leaves coated with lacquer. It contains fragments of Atthakathas, or commentaries on the Tipitaka. The manuscript is bound up with a green velvet wrapper and a ribbon, or sazigyo. Burma, nineteenth century. British Library, Or 3672

Buddhist texts that were compiled in addition to the Tipitaka are commentaries by important Buddhist scholars like for example Buddhaghosa, a fifth-century scholar who played a defining role in the development of Theravada Buddhism. Commentaries as well as translations were crucial for the spread of Buddhism to mainland Southeast Asia, where it is widely practised up till today.

Chapter four of the book provides information about the Sangha, the Buddhist monastic community. Themes in this chapter include aspects of monastic ordination in Theravada Buddhism, how the Buddha founded the Sangha, and the rules of monastic discipline and interaction between the Sangha and the lay community. Soon after attaining enlightenment the Buddha founded the order of monks, or Bhikkhu-sangha, which was later extended to the order of nuns, or Bhikkhuni-sangha. 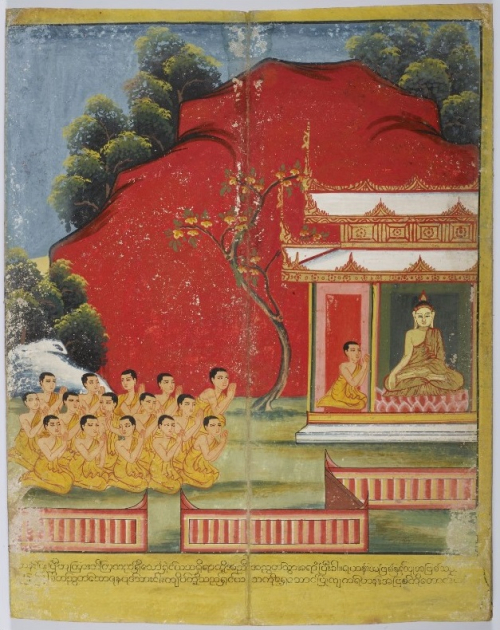 This image shows the Buddha’s ordination of Yasa, who went to the deer park near Varanasi
to become a Bhikkhu. Burma, nineteenth century. British Library, Or 14553, f. 2

After listening to Buddha’s first sermon, his five closest followers joined the Buddha and became his disciples, forming the first Sangha. Yasa, the son of a wealthy man, left his home as he was dissatisfied with his life. After hearing the teachings of the Buddha, Yasa became the sixth disciple to achieve the first stage of perfection. Yasa’s 54 friends followed his example. Later on, three brothers of the Kassapa family asked to be ordained into the Sangha after the Buddha tamed a naga (serpent).

The book’s fifth chapter deals with Kamma, or the principle of cause and effect that tells us that every action produces an effect, and the effects of all our actions will return to us in the future. Our accumulated positive Kamma will come back to us in the form of blessings and the opportunity to lead a good future life or to experience a better rebirth, while negative Kamma will result in deterioration and lower forms of rebirth. Burmese and Thai artistic expressions of Kamma often include scenes of the Buddhist heavens and hells and the sixteen sacred lands of Buddhism.

Paper folding book featuring extracts from the Tipitaka and Phra Malai, written in Khmer script, with illustrations of Mahabrahma bhum (the Brahma heaven) and Tavatimsa bhum (heaven of the Four Kings). Thailand, 1849. British Library, Or 14838, f. 1

The illustrations portray the god Brahma with his four-faced head and a red aura (left) and the god Indra, or Sakka, also with a red aura (right). Both are seated on a marble pedestal before a red background decorated with delicate flower ornaments. Brahma and Indra are considered to have converted to Buddhism, therefore they are depicted in a respectful pose facing the Pali text passages from the Tipitaka that lie between them. 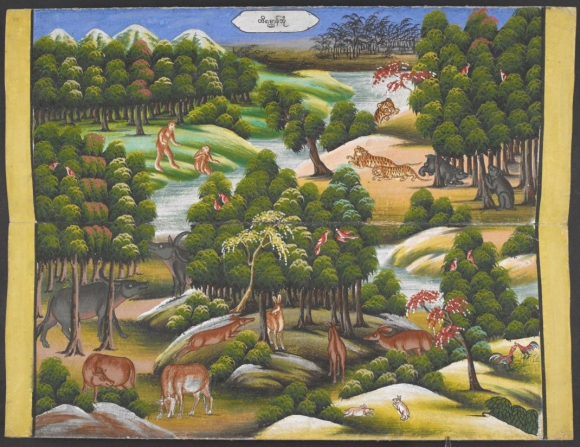 The idyllic scene above shows the legendary region of Himavanta. Located in the animal realm of Tiracchana loka, it is covered in forests with great lakes and mountain ranges. It is inhabited by wild animals such as tigers, monkeys, deer, bears, birds, rabbits, cockerels and buffaloes who live together peacefully. Groves of mangoes, bananas and bamboo are featured in this illustration; all play a critical role as the animals’ survival depends almost entirely on these plants.

The final chapter in the book provides details around “making merit” in every-day Buddhist life, which include activities that aim to support the Sangha, like the Kathina robe-offering ceremony, Uposatha or observance ceremony, and royal donations, but also rituals related to death and after-life, as well as communal festivals around the year which are open to everyone. 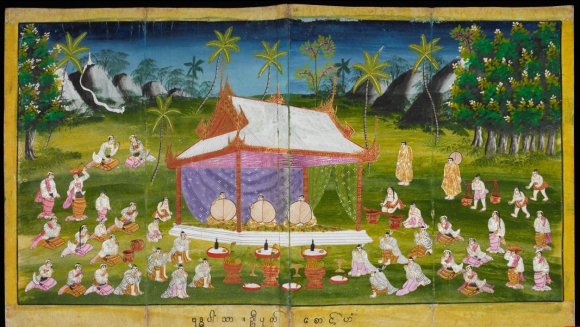 This painting depicts the Uposatha ceremony, held on new and full moon days of every month. Lay people bring food and other offerings to the Buddhist monastery and observe five or eight precepts on these days. Three Buddhist monks, shown seated in a pavilion with their large fans, administer eight precepts to the lay community. These precepts are: not to kill, steal, engage in sexual activity, lie, become intoxicated, eat after noon, adorn their bodies or sleep on luxurious beds. Uposatha days provide time for people to listen to the teachings of the Dhamma and the chanting of special Suttas, as well as to practise meditation. 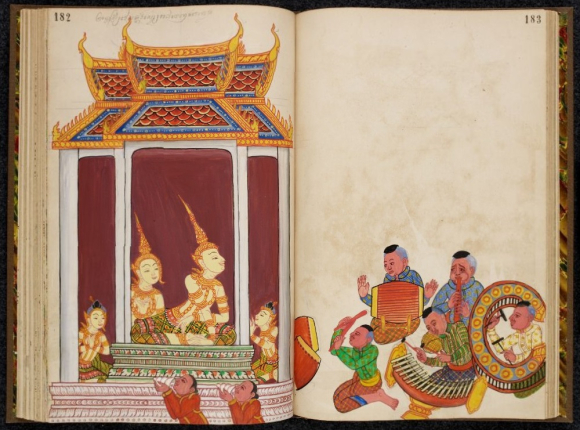 Scene from the Vessantara Jataka in a book containing drawings from the Ramayana and the Ten Birth Tales on European paper, with captions in Khmer script. Thailand or Cambodia, 1880. British Library, Or 14859, ff. 182–3

The book also contains a detailed bibliography, a glossary and three appendices providing a list of the 28 Buddhas of the past, explanations of symbols of the Buddha’s footprint, and an overview of the scriptures of the Tipitaka.

The book is available from all major booksellers and online.